Britney Spears's life and fortune haven’t been in her legal control for the past twelve years. The singer's multiple breakdowns in 2008 led to the court putting her estate, financial assets, and some personal assets under her's father and lawyer's control.

This form of legal guardianship is called a conservator-ship, it's typically implemented for individuals who are incapable of being in control of their own decisions. It was extended earlier this year until August 22nd and that's when the court will review Britney’s case once again.

The conservator-ship has caused a lot of speculation among Britney’s fans since its implementation. A considerable amount of them believes that this whole ordeal has lead to her being controlled and manipulated, which is how the #FreeBritney movement has been triggered. A Facebook post that was recently made by one of its members has gone viral, debating Britney’s well-being one step further.

Spears' fans are concerned about her well being. 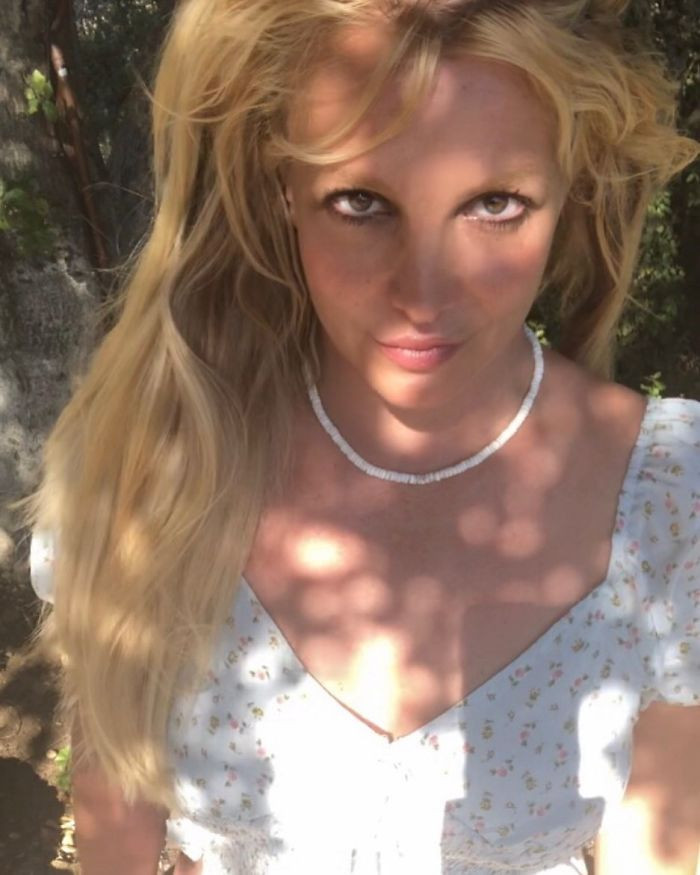 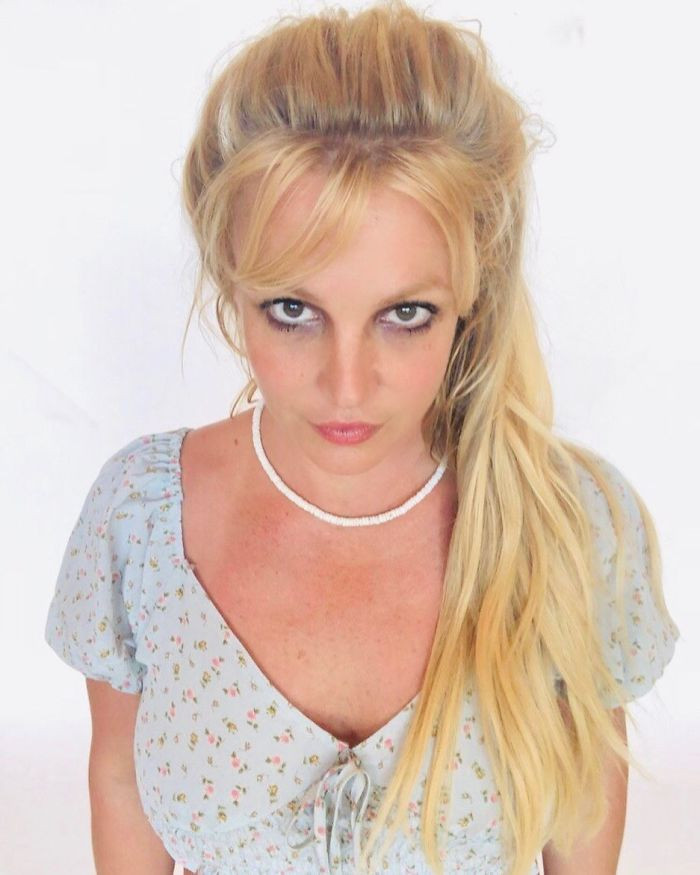 This concern triggered the #FreeBritney movement 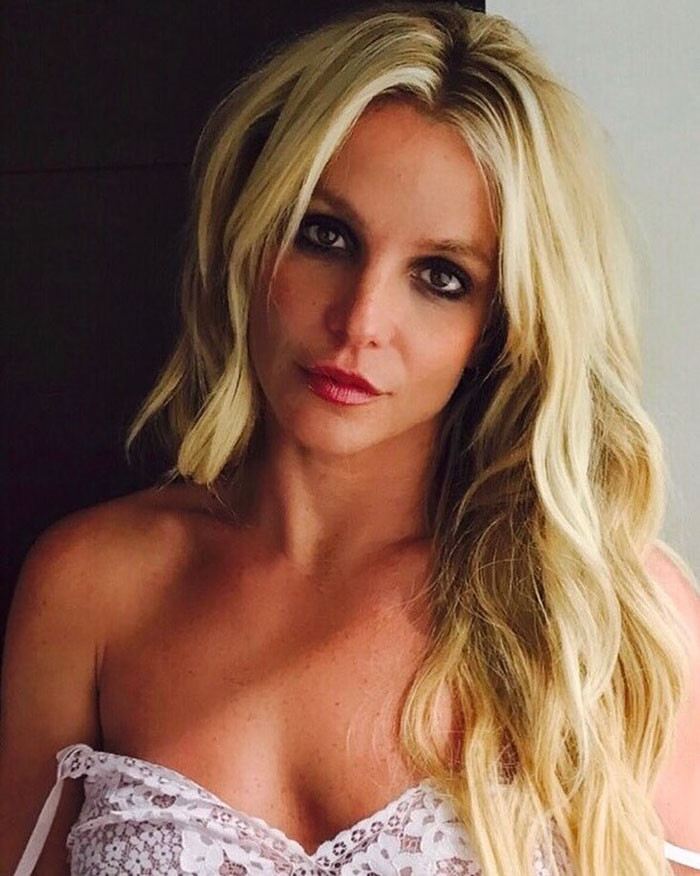 One of the members of the #FreeBritney movement made a Facebook post that went viral, debating Britney’s well-being one step further. 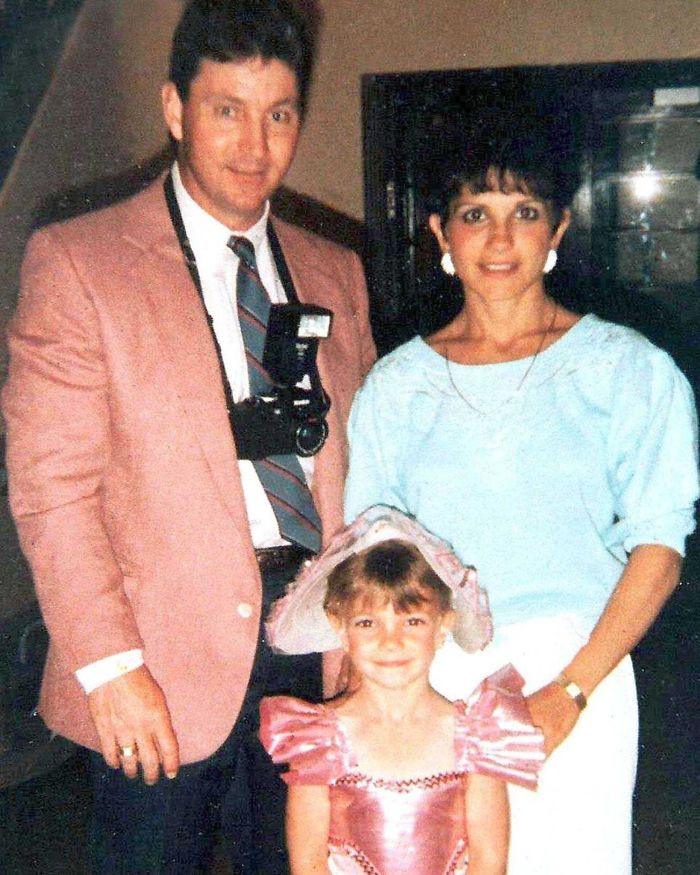 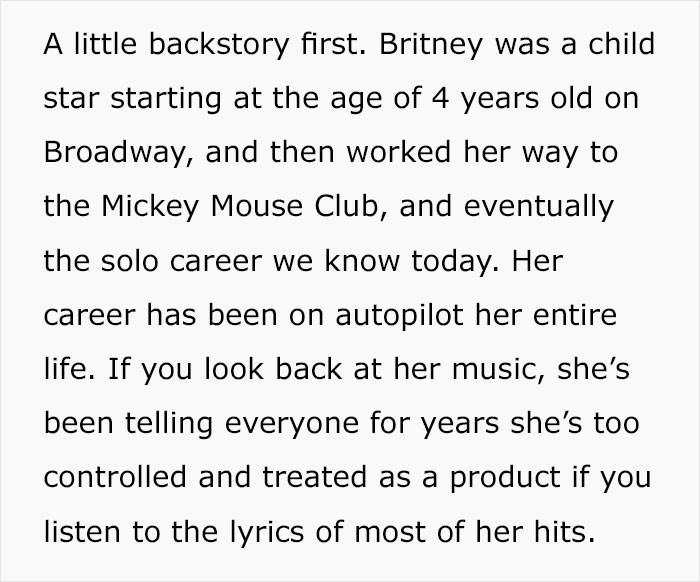 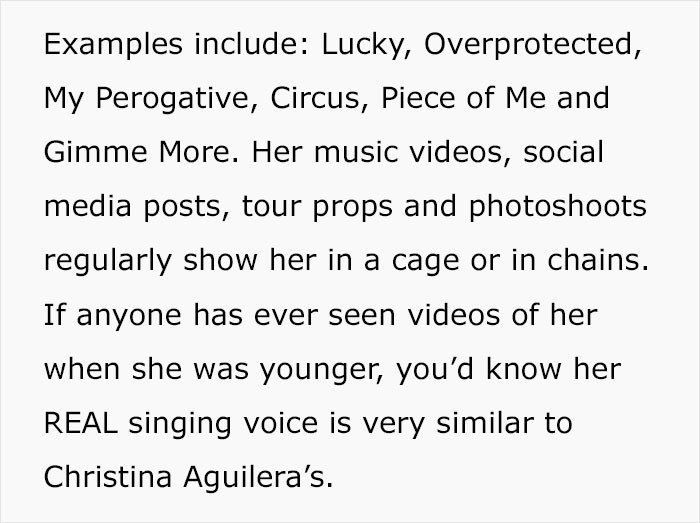 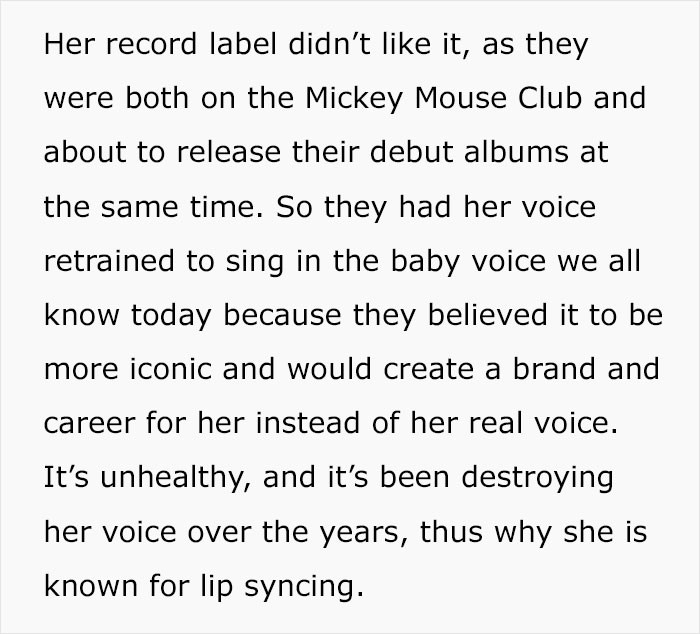 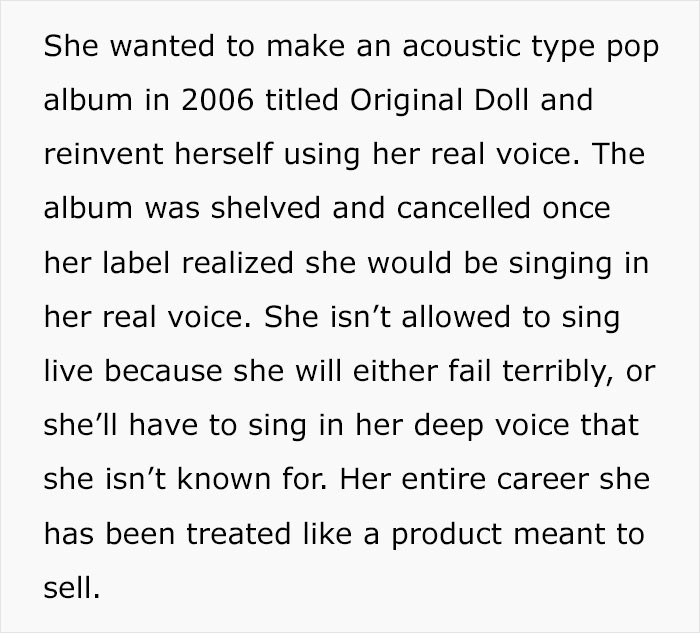 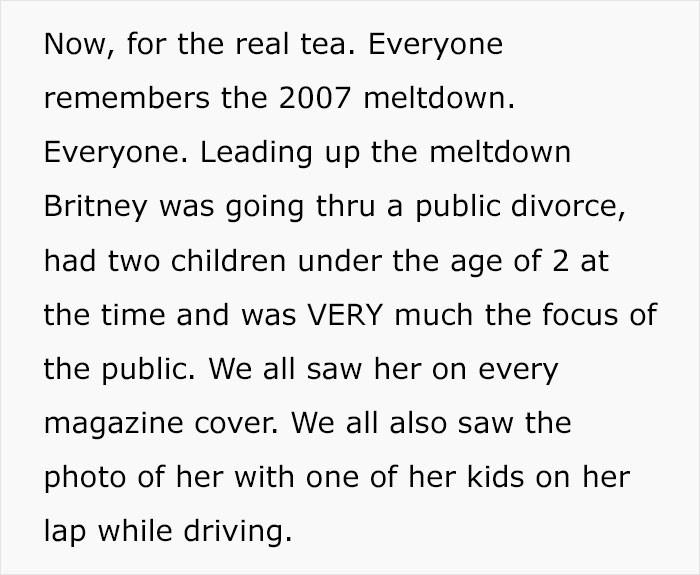 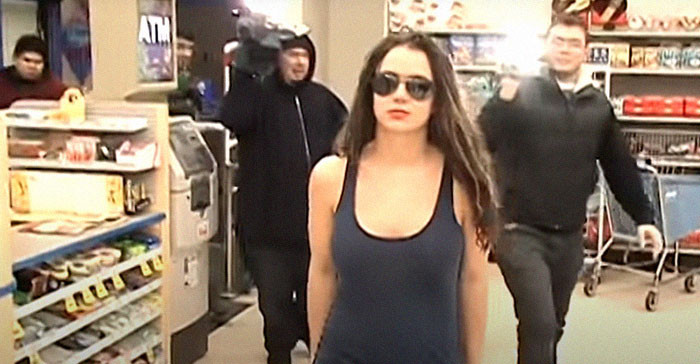 The paparazzi would not leave her alone 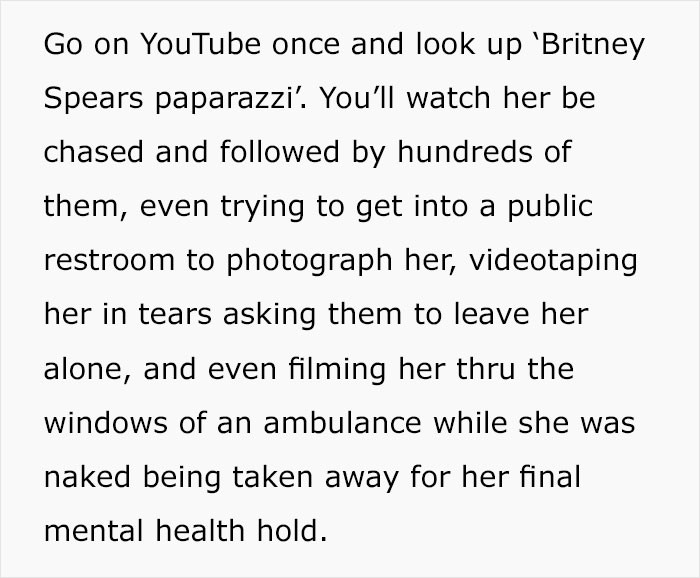 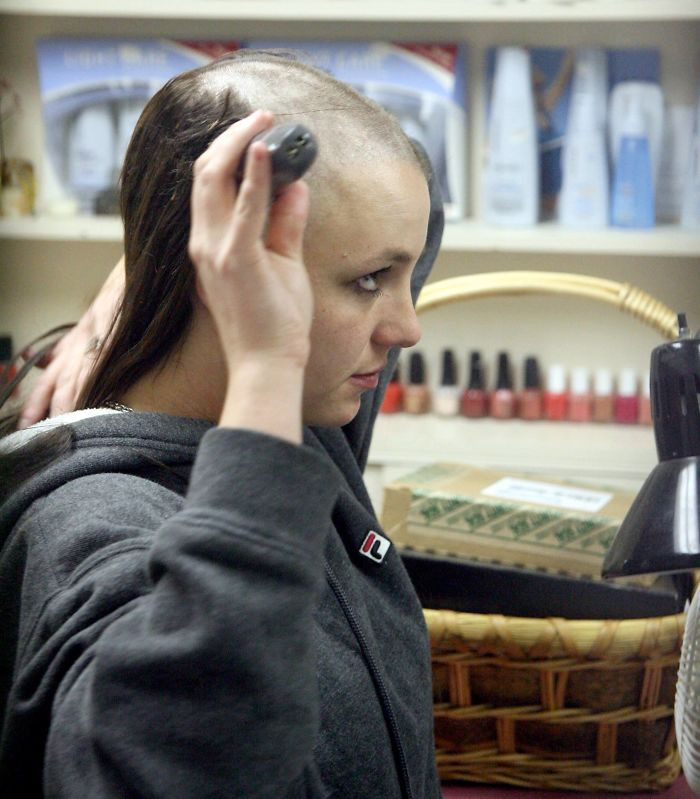 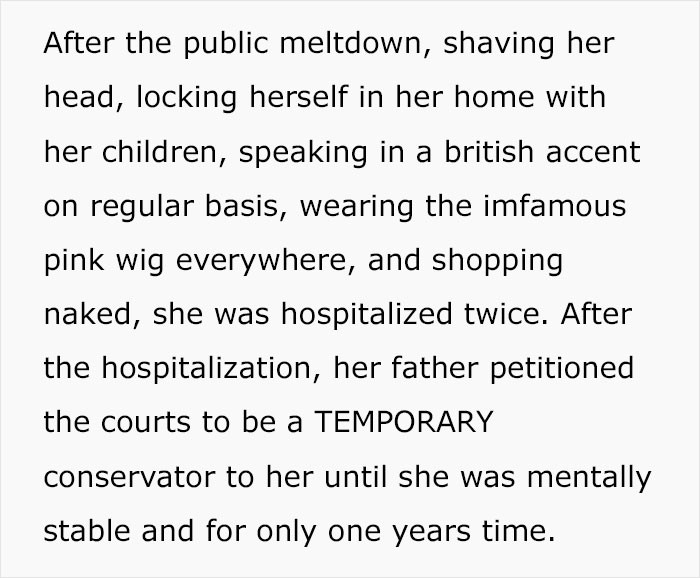 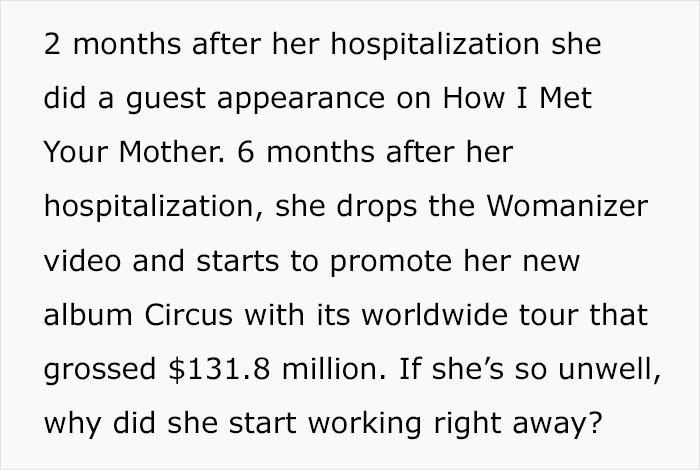 There seems to be something fishy going on... 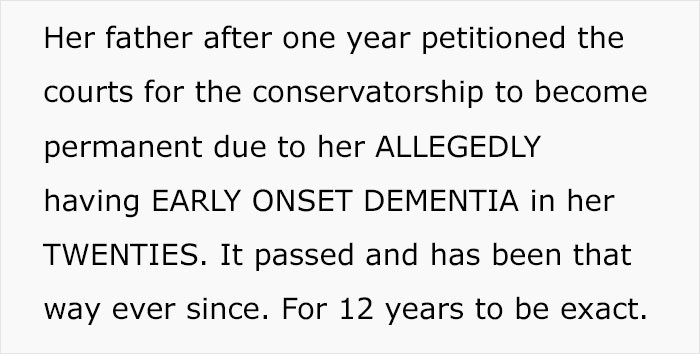 A quick break down 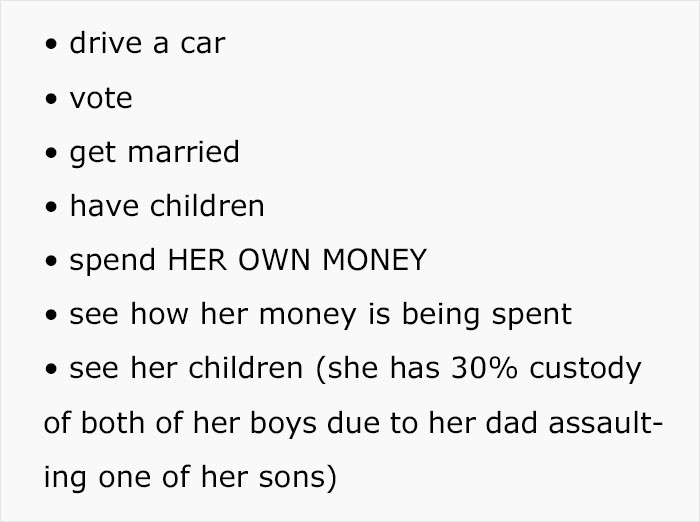 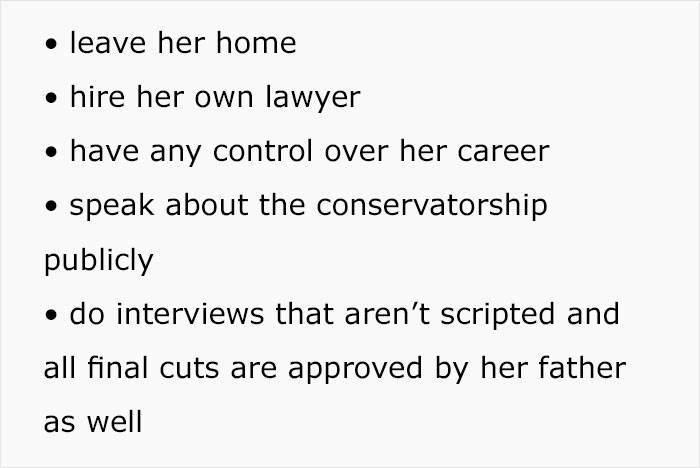 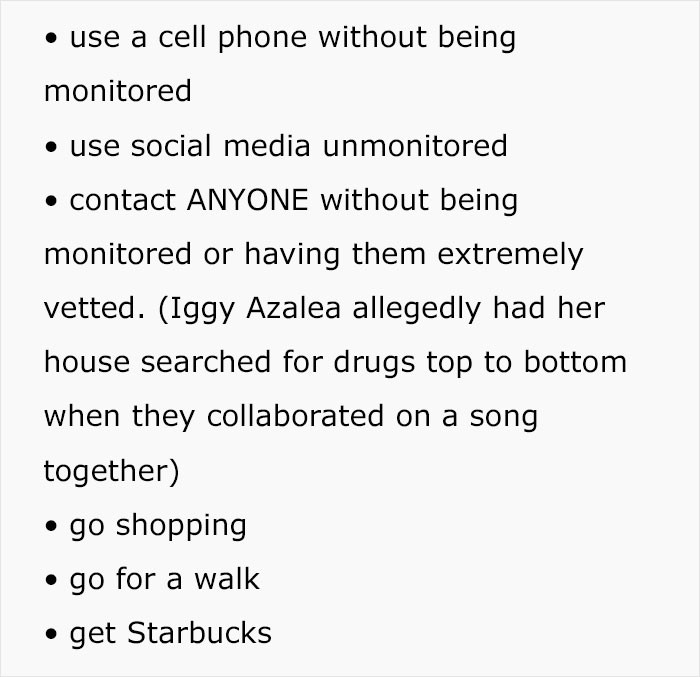 Why is she still working? 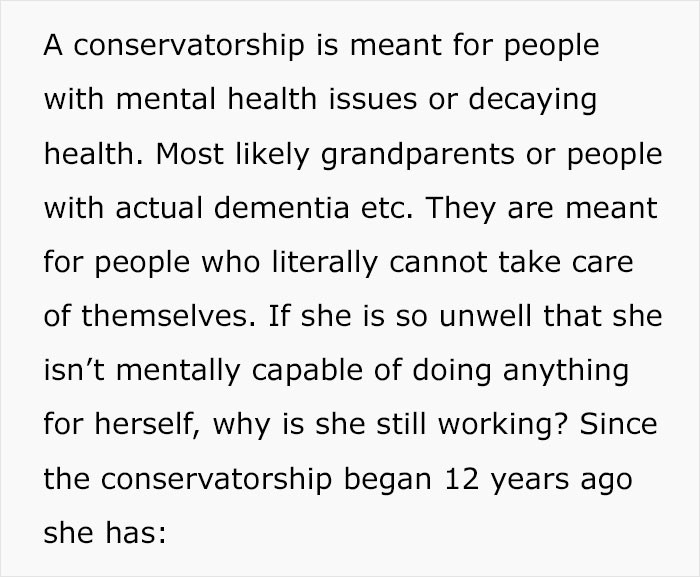 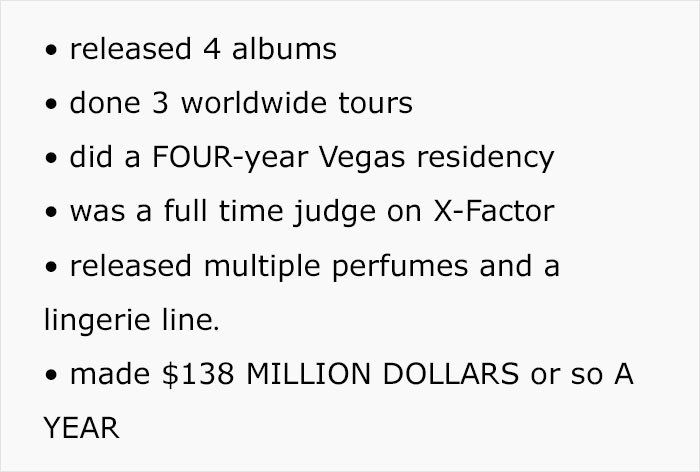 She was held there against her will 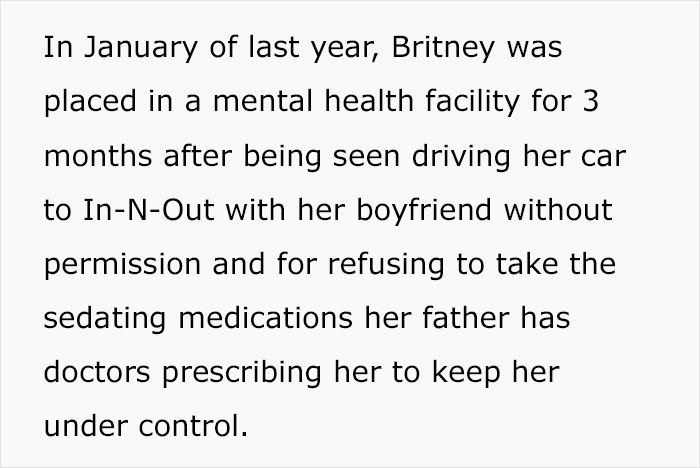 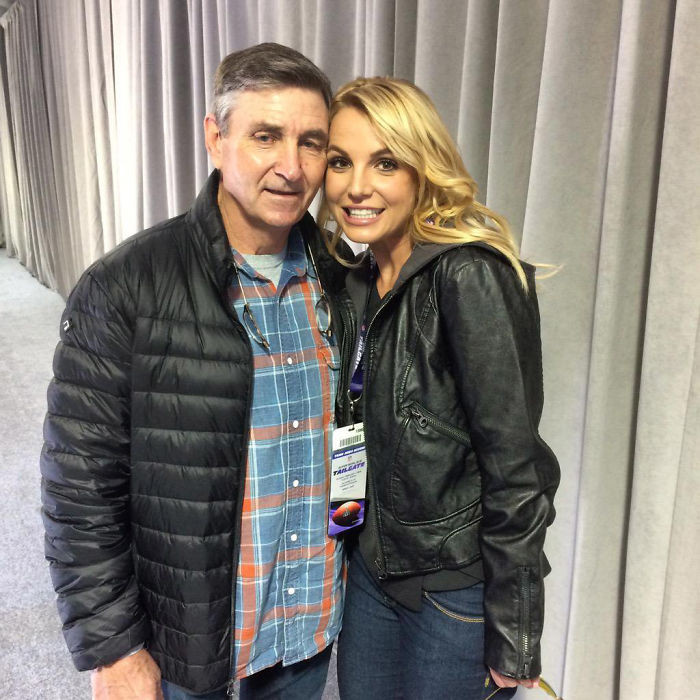 The start of the #FreeBritney movement 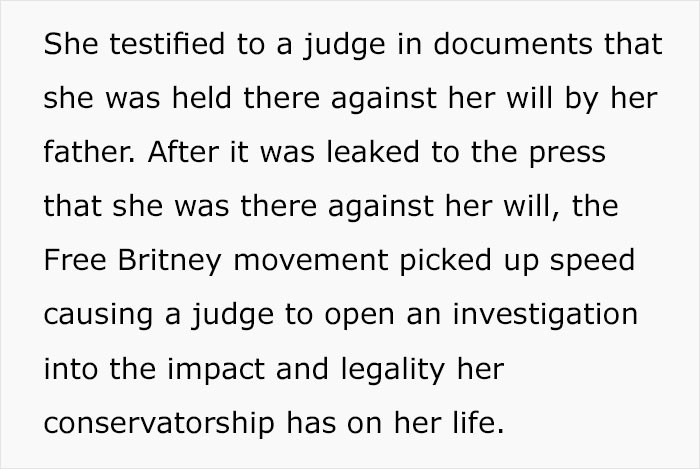 Even her mother supports the movement. 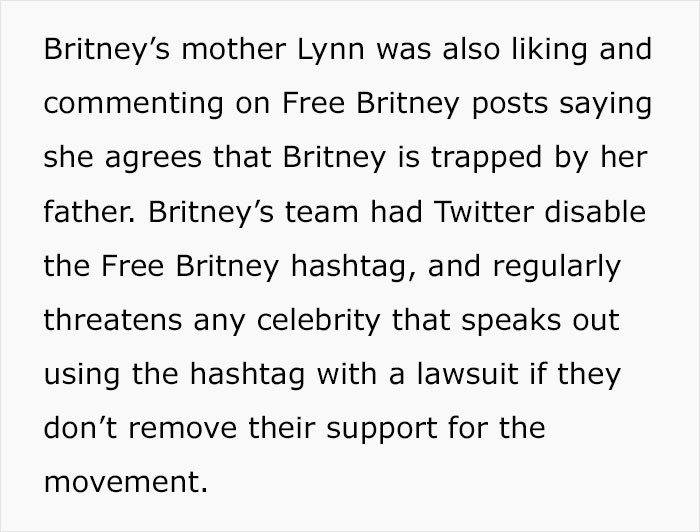 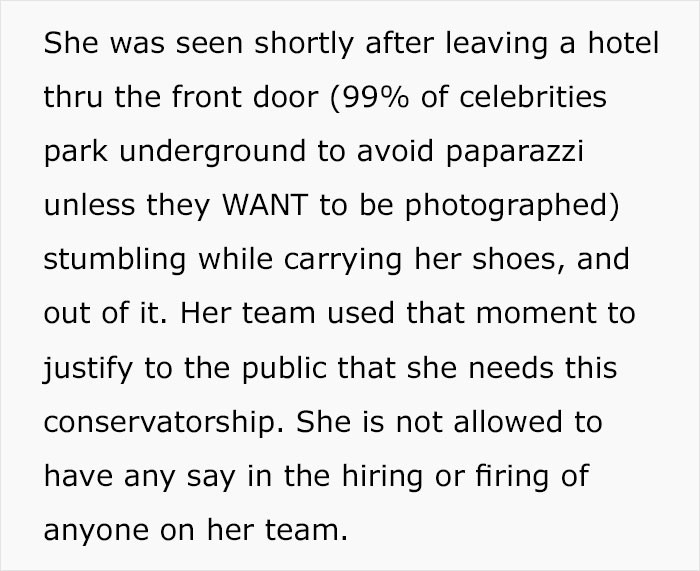 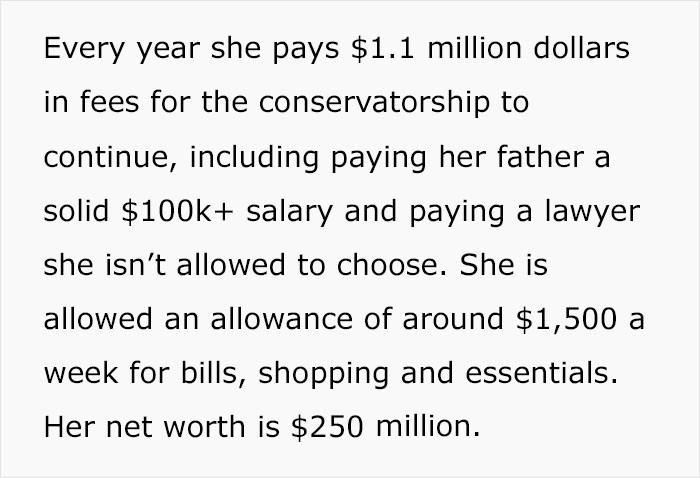 She has NEVER has control over her life... 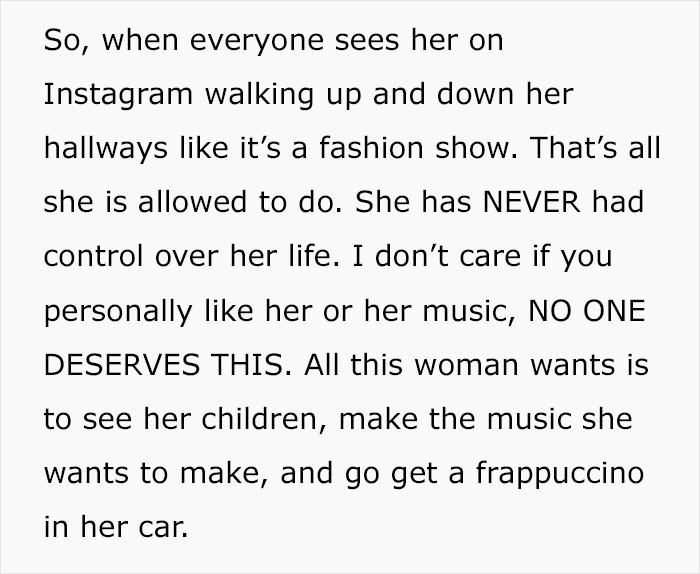 People shouldn't be making fun of her. 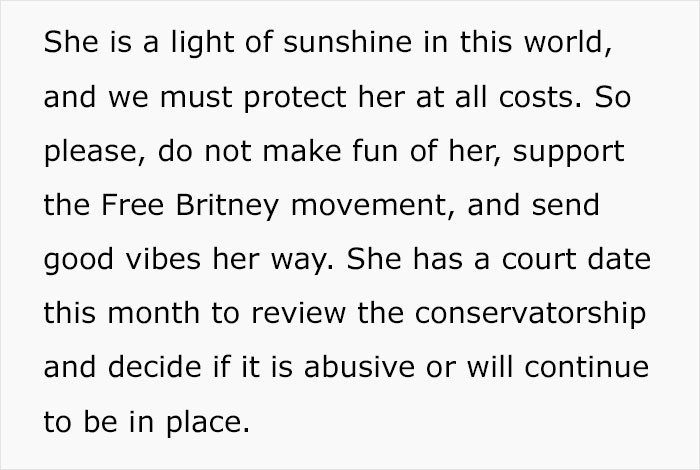 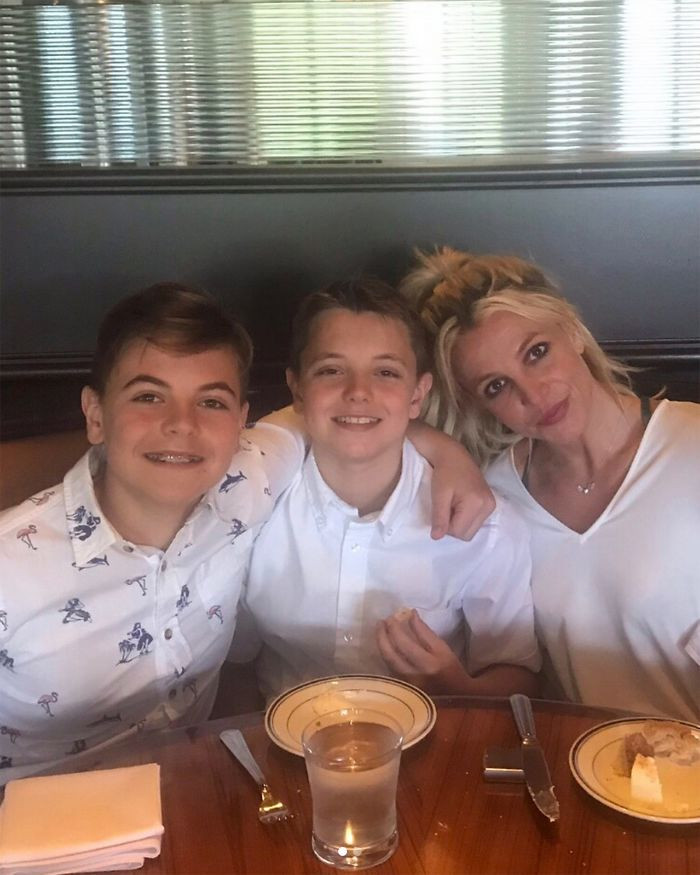 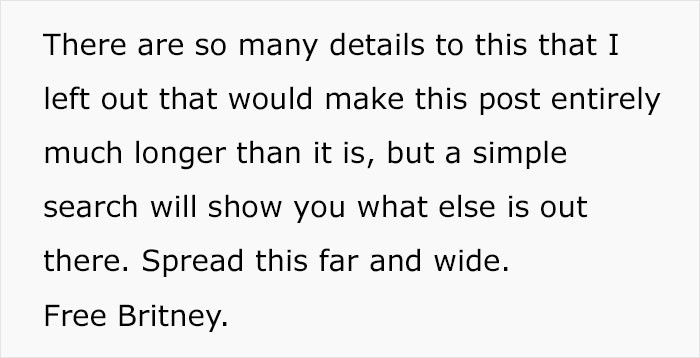 Britney had such a difficult time during the late 2000s. She was spotted driving with her baby on her lap and not strapped in a car seat. She hit a photographer’s car with an umbrella and shaved her head. She also had to deal with a divorce where she refused to give up custody of her children and locked herself with her child in a room, the incident ended with her being taken out on a stretcher and hospitalized for seemingly being under the influence. Britney went to rehab several times in 2008 and was committed at least twice to a psychiatric hospital.

Her father, Jamie Spears was eventually allowed to be in charge of her estate and health, which ranges from negotiating business deals to restricting who gets to visit her. Attorney Andrew Wallet's role consisted of helping manage Britney’s assets.

It was revealed in Britney Spears’ financial records that as of 2018, her net worth was $59 million. She spent $400,000 that year just on living expenses and an additional $66,000 on household supplies. Her legal and conservator fees amounted to $1.1 million that year, and $128,000 of that amount was taken by her father.

Britney’s fans believe that when attorney Andrew Wallet resigned from the position of co-conservator, it was a sign that something was wrong. “Conservatorship is engaged in numerous ongoing business activities requiring immediate attention,” he wrote in court filings, adding that if his resignation were accepted promptly, it would in Britney’s best interest. However, a reason for his resignation was not provided.

If he did not step down, spears would have suffered “substantial detriment, irreparable harm, and immediate danger” according to Wallet.

Law experts confirm that conservatorships can be corrupted, however, if it still stands, there's probably a good reason.

“The fact that she’s been under conservatorship for a dozen years should tell you something about the state of her mental impairment and her vulnerability,” lawyer Adam Streisand, who specializes in high-profile wealth disputes told Los Angeles Times. “The courts will do everything they can to ensure that a person is not conserved unless they really, really need to be.”