Dads are incredible, although we must admit it's always the moms that take the cake when it comes to parenting. Yet, that doesn't mean that dads are slouches. Dads have been doing a great job at providing the needs of the family. They're brave and strong, making sure everyone at home feels safe and secured. They fix things, tell classic dad jokes at dinners, and always make sure the kids are always entertained.

There are hundreds of amazing dads in the history, but we've set our eyes to this one clever dad who watches the kid while her wife goes for a quick shopping. This dad found a way to get a good nap while his kids are super behaved.

Meet the genius dad, Michael. He came up with a way to take a quick nap while making sure the kids are behaving well

Michael Weber Jr. is from Colorado and works as an operating nurse. He returned home from a 12-hour night shift. We could imagine him getting home with his eyes almost shutting down. In an interview with Bored Panda, Michael revealed what happened then:

“My wife and I have been together since middle school and we really love to have fun, are pretty laid back parents, and love having our four kids around."

"However, as any parent knows, life with kids—especially four—requires you to be pretty creative in getting any time to yourself. We’ve just recently relocated from the east coast away from our family support, so my wife and I are juggling many hats these days.”

Monica, his wife, needed to get some stuff in the grocery, so someone has to take care of the kids. Michael volunteered, despite feeling extremely exhausted.

After a couple of hours, Monica went home and found what you see in the photo. She sees Michael taking a nap and her kids with pens and papers. Apparently, her husband was just "posing" as the kids were practicing "realism art", and whoever draws the best gets the grand prize: a bar of chocolate! 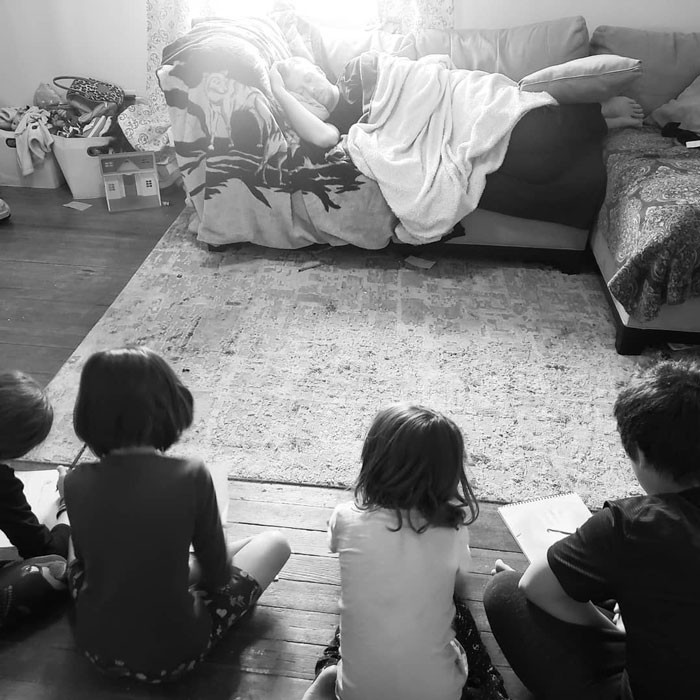 Monica was quick to share to her friends what she found, and it's hilarious! 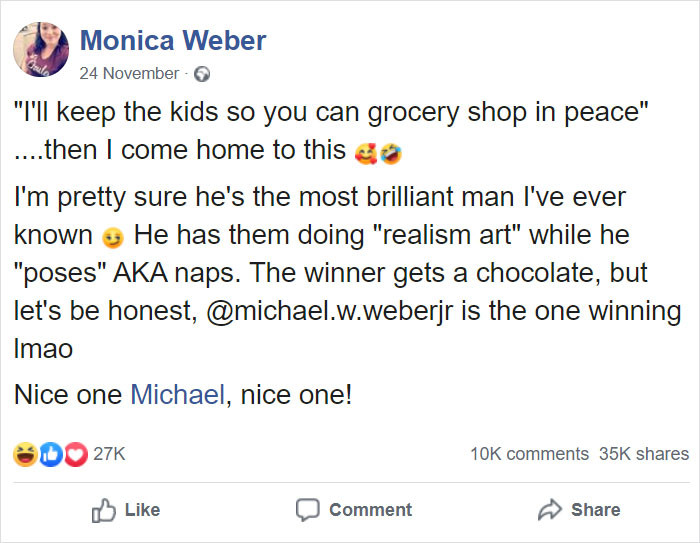 "“Before this, I worked in an inner-city pediatric hospital, and before that, the military, which really gives me perspective on how fragile life is. I really try to live every day to the fullest, which my wife will argue that I am always trying to be the fun parent, leaving her to be the disciplinary, but I have no regrets."

“My wife would kill me for saying I “babysit” the kids,” laughs about it Weber Jr. “When I parent our kids, I try to come up with fun and creative ways to get things done. I’m a hockey player and have always been competitive, so I think it’s fun to make everything a race, game, or contest, and watch the kids compete to see who’s the ‘best cleaner’, ‘can fall asleep the fastest’, ‘read the longest’, and quite honestly my kids will do darn near any chore or task for some candy.

﻿“That’s how I got them to sit still and to do these drawings. I promised some candy to the kid with the most complete drawing. I also told them if they were loud or woke me up because they were fighting or complaining, I would move and they would have to start all over again. So, that kept them pretty committed. I’m a really light sleeper and they’re finally at an age I could get away with a stunt like this.”

The couple got a lot of attention. Monica then soon posted an update.

"I had no idea this would go viral. I honestly didn’t even know my wife posted it since I don’t really post on Facebook much,” explained Weber Jr. the surprise. “I had just come off a 12-hour overnight shift as an OR nurse. When I got home, the kids were being crazy and my wife was trying to get them to bundle up so she could go to the store for groceries. I could see she was stressed and told her to leave them with me while she ran down the road real quick.”

“Then, I presented them with this idea and as soon as I said they could do art and win chocolate, they were all over it. It bought me a 20-minute nap while she was at the store. When she got back, the kids told her all about it and she must’ve snapped the picture. Off to bed I went, didn’t think about it again until we started getting tagged in all these posts. It’s crazy"

“It’s been really cool to see all the positive responses this post has brought. We appreciate all the kind words. Our kids aren’t perfect and we aren’t perfect parents, but we’re perfectly imperfect in our own ways and I wouldn’t change anything."

“I’m just a dad trying to make as many memories as I can before my kids don’t want to sit and have drawing contests or they become teenagers and don’t want to hang out with their ‘fun’ dad anymore. And, if I can sneak a nap in in the process and keep my wife happy, why not, right?!?” 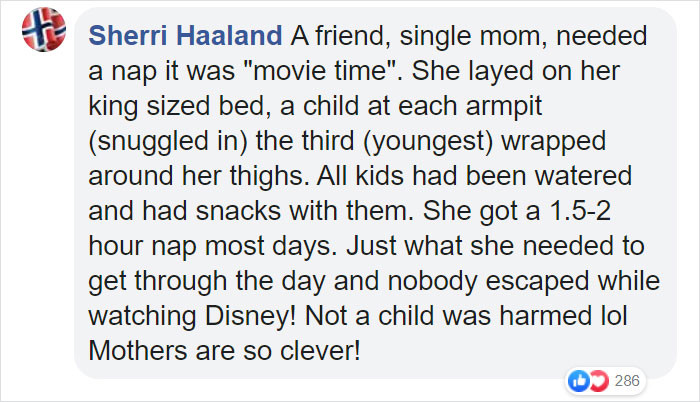 This dad got the sleep he needed.... but sadly had to clean up the mess his kids made 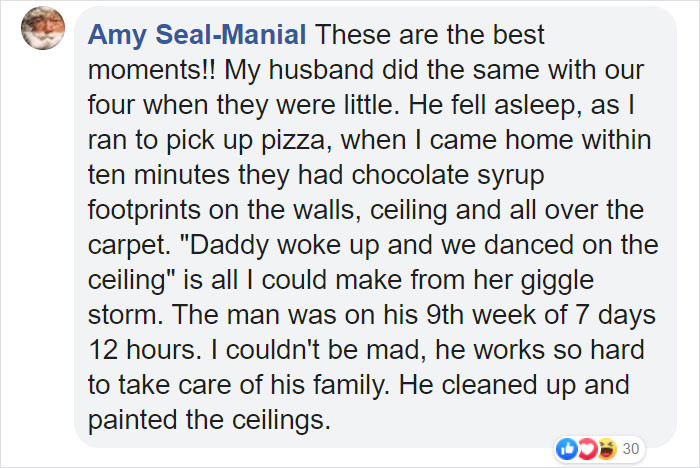 Maybe it's not for everybody? Haha!

It depends on the kids, really.

I wish all kids could be this understanding

Would have been great if that moment was captured by a camera! 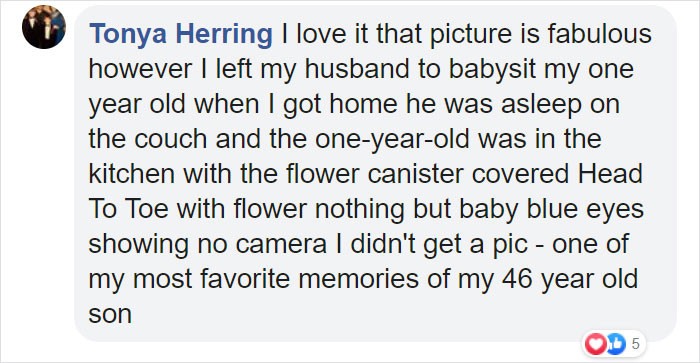 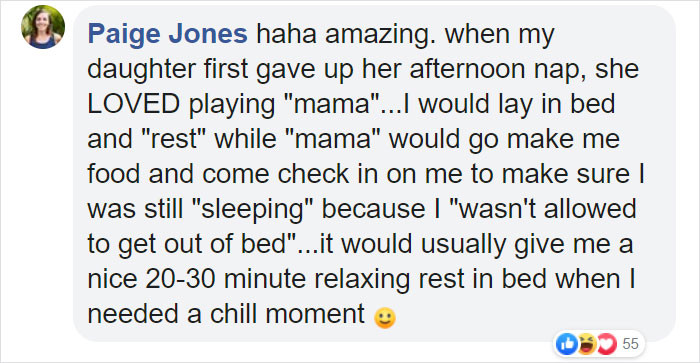 Sesama Street helped you get the rest you needed 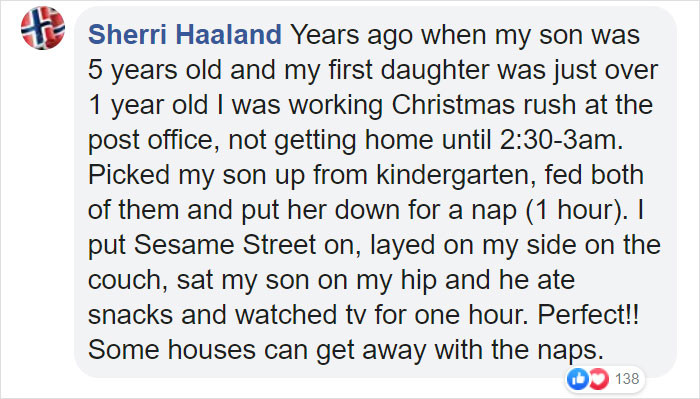 Good for you for having such well-behaved kids

The dad that knows when there's danger... he could be Batman, you know?