Dogs are always awesome. They can understand the things that surround them, including our emotions, facial expressions, body language, and tone of voice.

Have you wondered if dogs can recognize the pictures on the wall? In the short clip we're looking at today, it would seem that they do have that ability, and that it seems our beloved canines understand things more than we think they do.

Dogs may not completely understand the context of a photo, but they do recognize who and what things are in the image. So when you have a dog look at your photo, he'll recognize that it's you.

What's fascinating is that they are more interested in the faces of their kind than ours. The dog we're looking at today is called Frank and Frank's brother, Smiff, died some months ago but he and his family will always remember the sweet dog.

In honor of Frank's memory, Libby Davey (their mom) decided to have his picture displayed in the living room. This way, the whole family will always remember the wonderful dog.

But Davey never know how sad and affected Frank was. So when he saw his late fur brother's portrait, he had the most heartwarming reaction.

The beautiful scene was caught on camera. Davey shared the video on Facebook.

The family could not forget the late dog.

Dogs can understand and respond to a variety of our gestures. When they are fully grown, their intellect is about the same as a 3-year-old baby.

Toddlers can start making sense of objects based on photographs. So they may have the same ability.

Looking at Frank's reaction, you'll definitely sense that he recognizes that it's his late brother in the painting.

According to scientists, dogs use images to acquire information. For example, if the dog is viewing a photo of a ball, then he can recognize the same photo even if it's in a different room.

Dogs may not understand the entirety of the picture. However, they recognize the things they're familiar with. 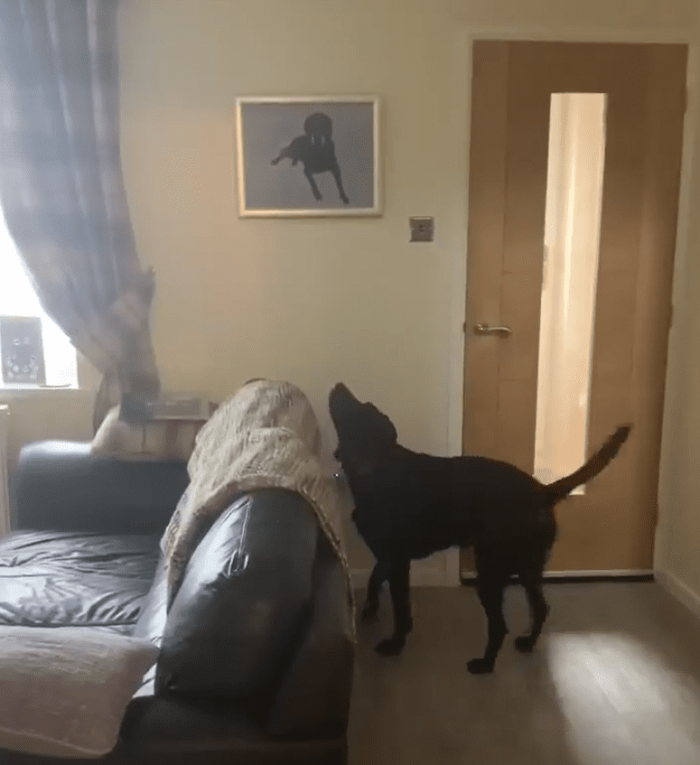 In terms of dogs' history, their recognition of images is still relatively new. Dogs love being part of their humans' social network, so it's no wonder that they recognize their owners in a photo.

Dogs can show an indication that they recognize what's in the photo.

This is exactly what we see in Frank's video. His reaction toward the painting of his dead brother was indeed touching!

Generally speaking, the sense of smell is a dog's strongest point in terms of familiarizing things and people. But when canines intently stare at the photo, they can imprint the images in their brains.

Using their eyes, dogs can track what's in the photo. They will focus on the image, and you will notice that they are following the specific part of the picture they recognize.

In a study by scientists, the dogs concentrated on the people they're familiar with rather than the images of strangers. The study also revealed that they can recognize the other pets in the family, just like what Frank did.