How much is your pet’s life worth? Unfortunately, our pets get sick too, and sometimes the medical expenses are really high.

Redditor u/gooddogbadbf posted his problem to r/AmITheA**hole: Summer, his four-year-old dog was diagnosed with cancer. Fortunately, it is discovered in an early stage, and the veterinarian thinks that, with the right treatment, the dog will likely make a full recovery.

The treatment is costly, around 10K, but luckily, the OP has that kind of money set aside for these kinds of emergencies. He didn’t want to buy pet insurance but decided to set aside some money each month because he didn’t have any pet medical issues in the past. 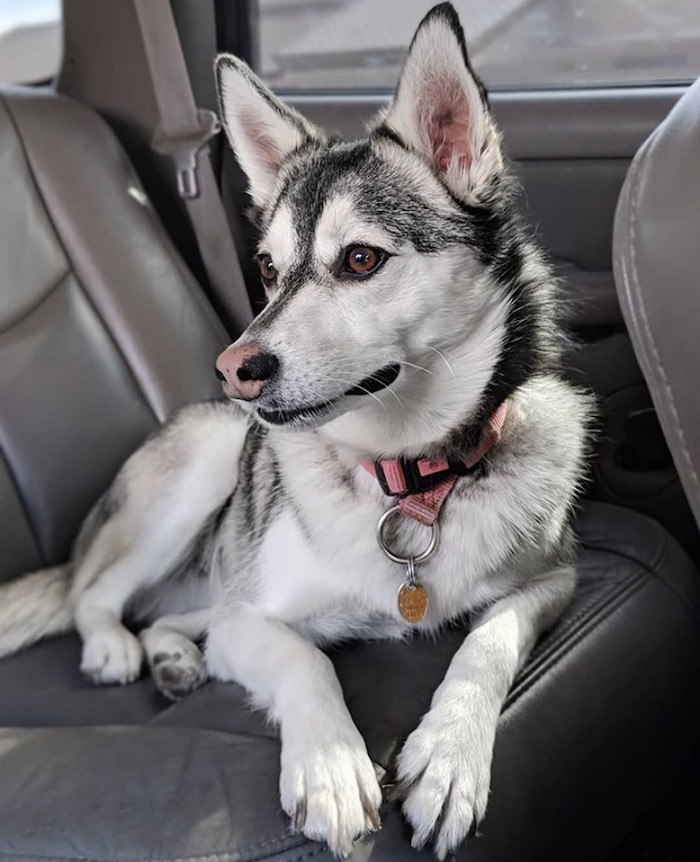 While the OP is comfortable with using the money for medical treatment, his girlfriend doesn’t think it’s a good idea:

"Now when I told my gf of 2 years about my dog, she asked what I was going to do, since it’s not like she expected me to have that kind of money lying around. And if I hadn’t been saving money specifically for my dog, I probably wouldn’t be able to afford her treatment. When I told her about the money and that I was going to pay for the surgery, she was upset because 1. She didn’t know about the account and 2. I’d be spending so much money when she’s out of a job and struggling. She moved in with me a few months ago and doesn’t have to pay rent. We haven’t really discussed finances that much, but I know being laid off has hurt her.

She thinks that I shouldn’t spend it on my dog and wants me to save the money for if/when we get married or have kids. I told her that I’m going to do it and I’m going to schedule my dogs treatment soon. With all that’s happening, neither of us have been able to spend time away from each other, so we haven’t said much the past 24 hours and she’s still upset that I’m picking my dog over our future. So, AITA for spending so much money on my dog?" 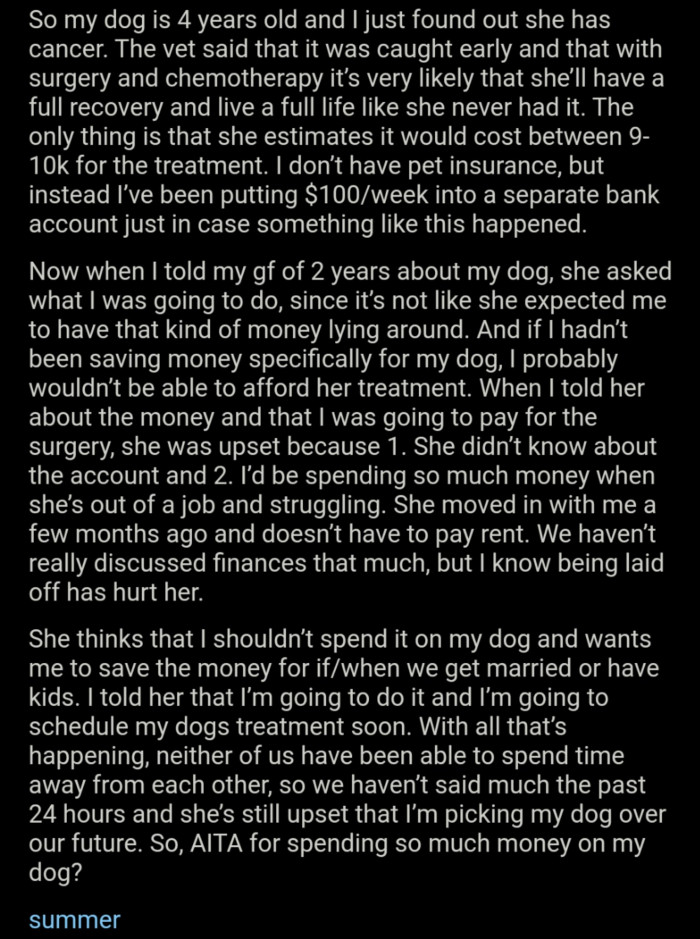 Most commenters say that the OP is right. It’s his money that he set aside for similar situations, and a dog is basically a family member. How can you put a price on their life, particularly when that life could be significantly prolonged? 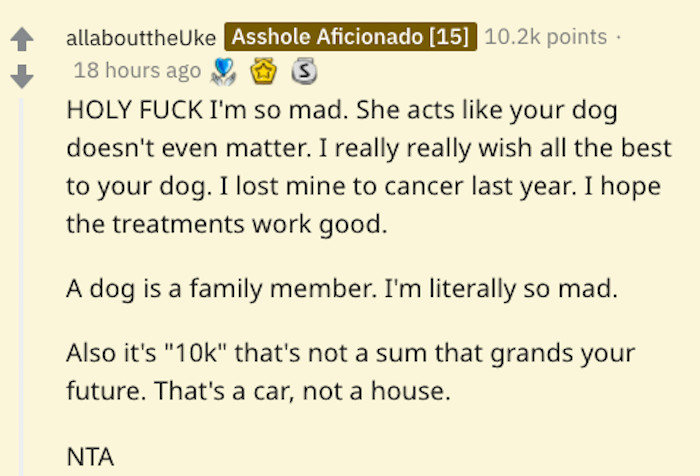 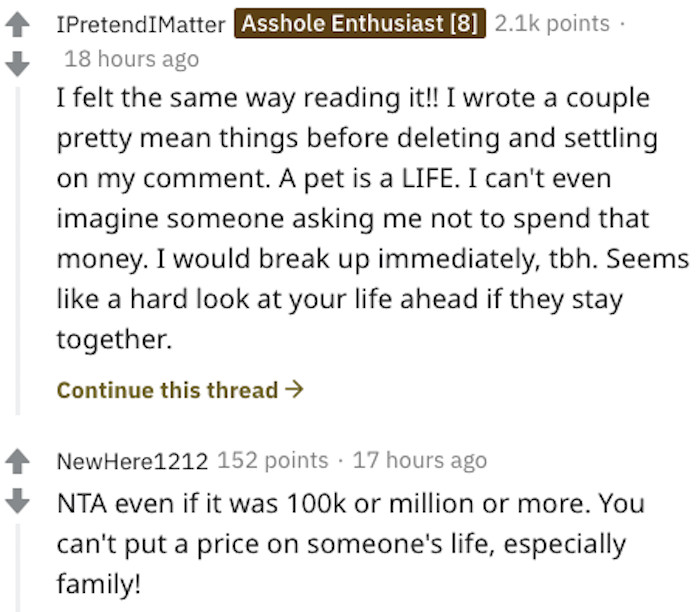 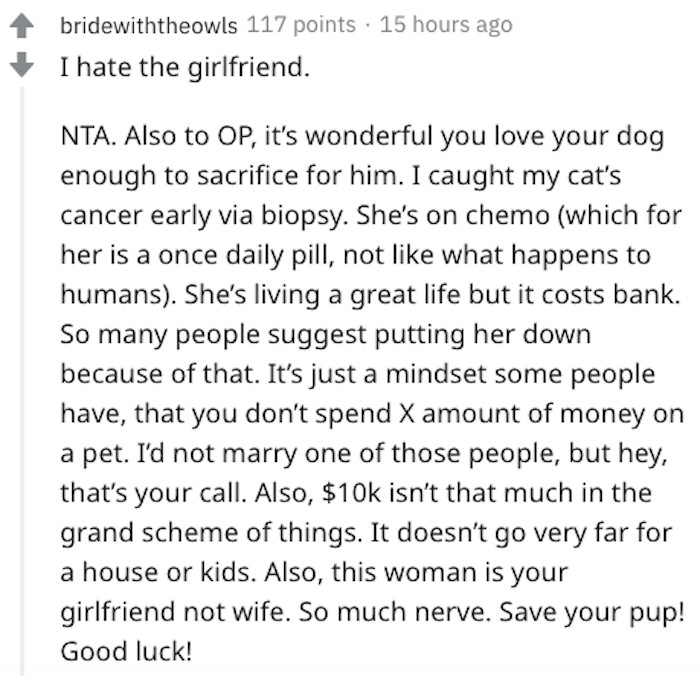 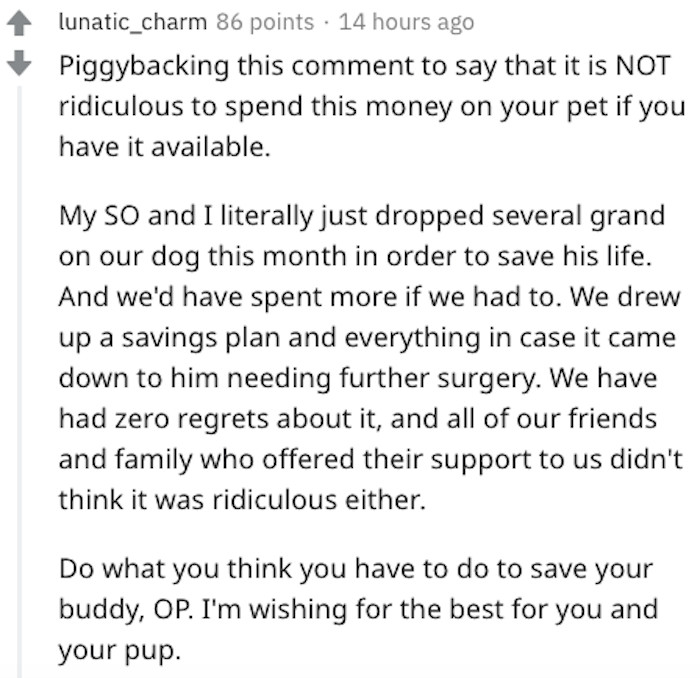 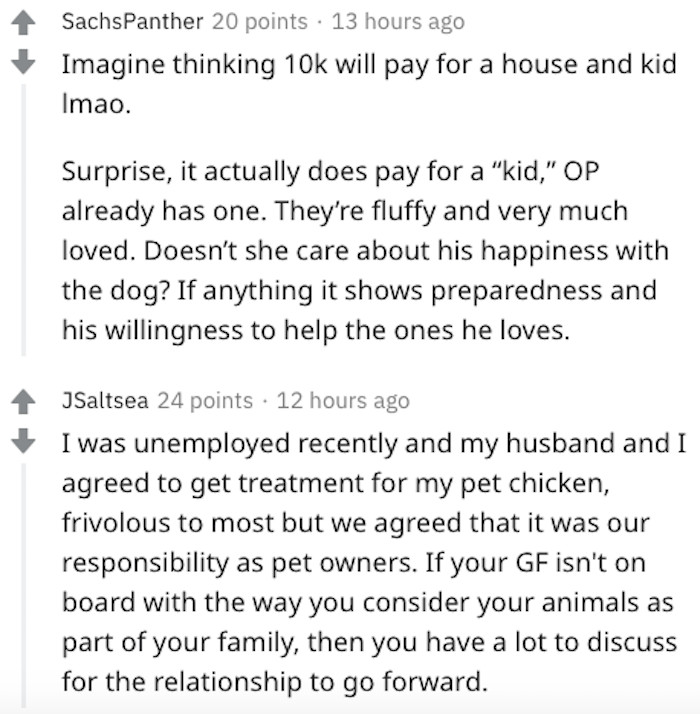 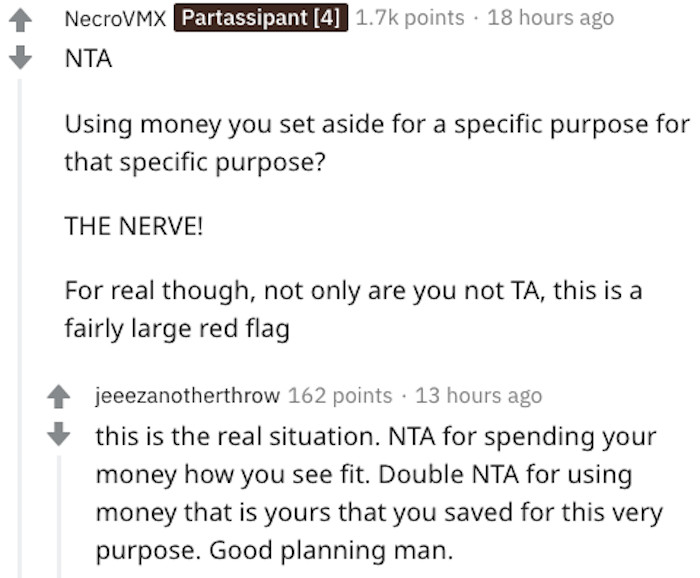 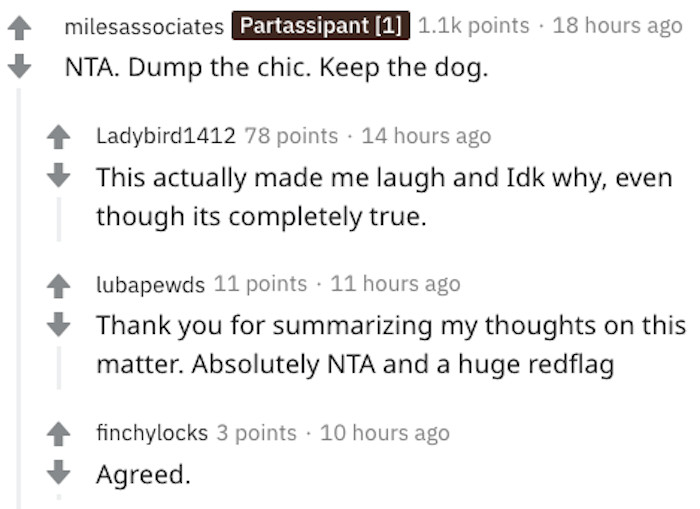 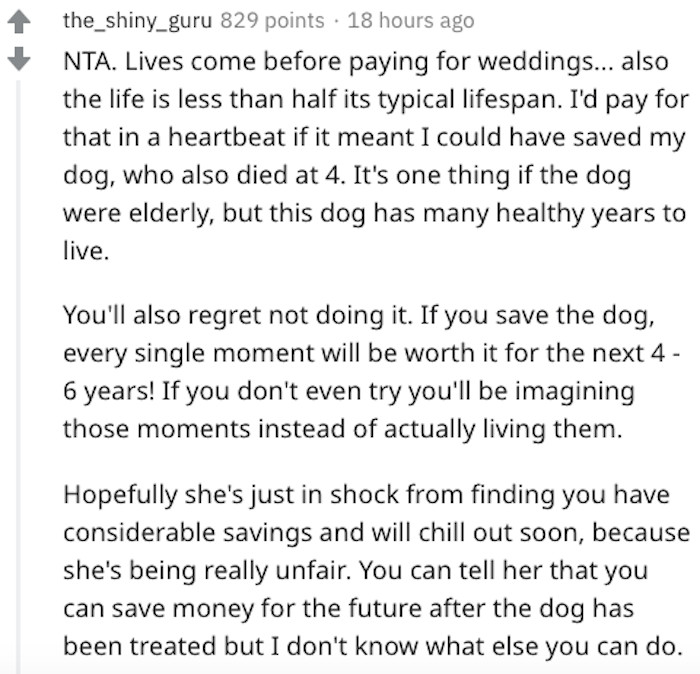 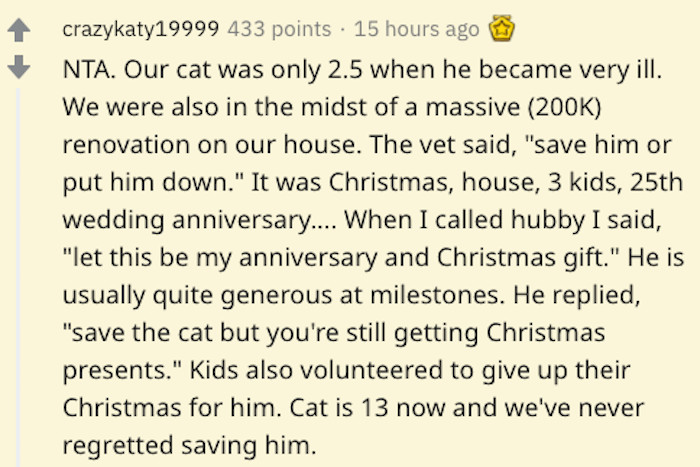 But some people believed the girlfriend has a point. It is a considerable amount of money, and things are not great with the economy right now. Even though it is his decision, it’s not irrational of her to be disturbed about this massive money reveal, only to see it all gone: 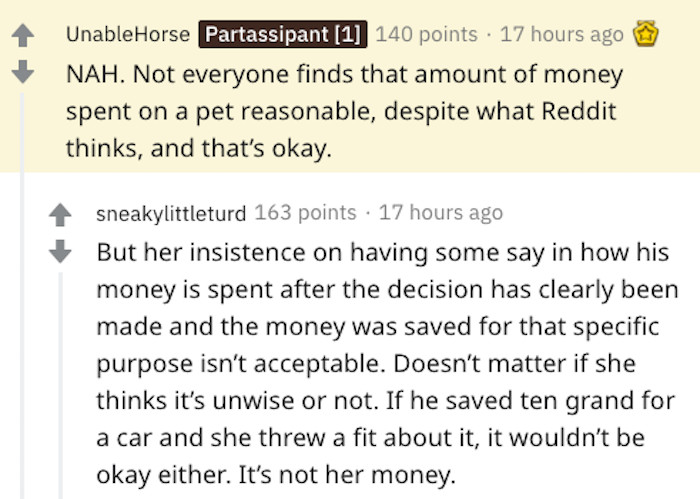 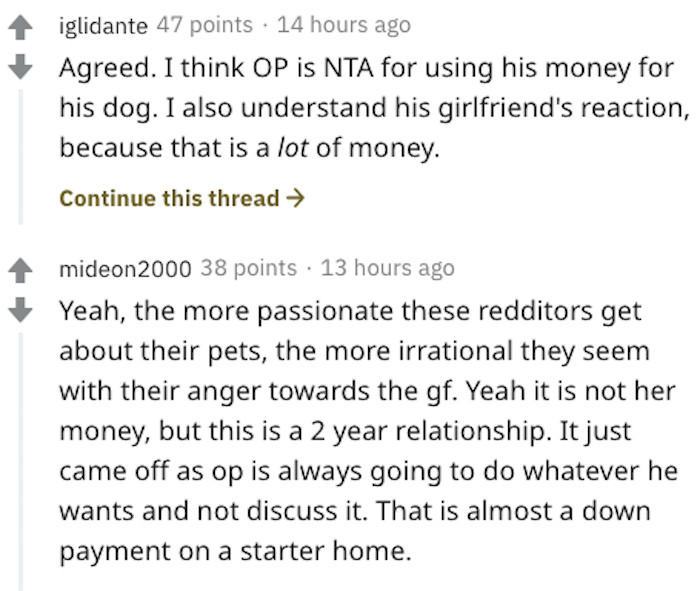 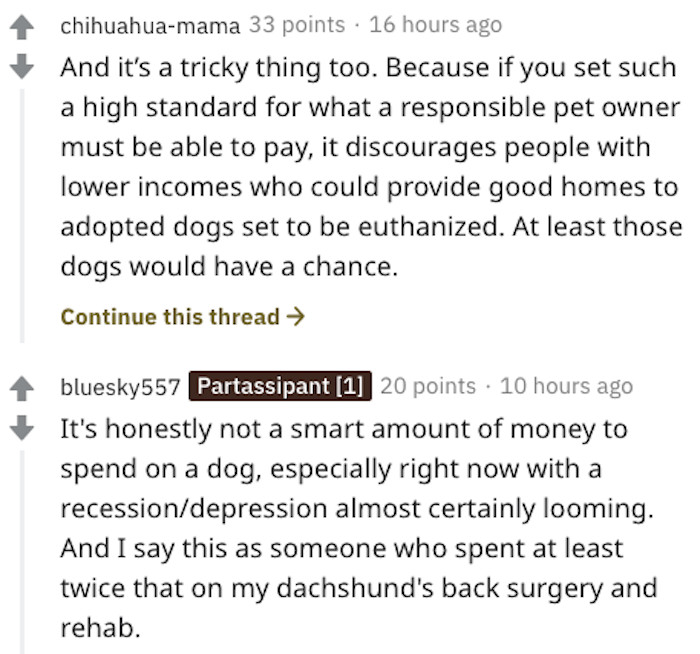 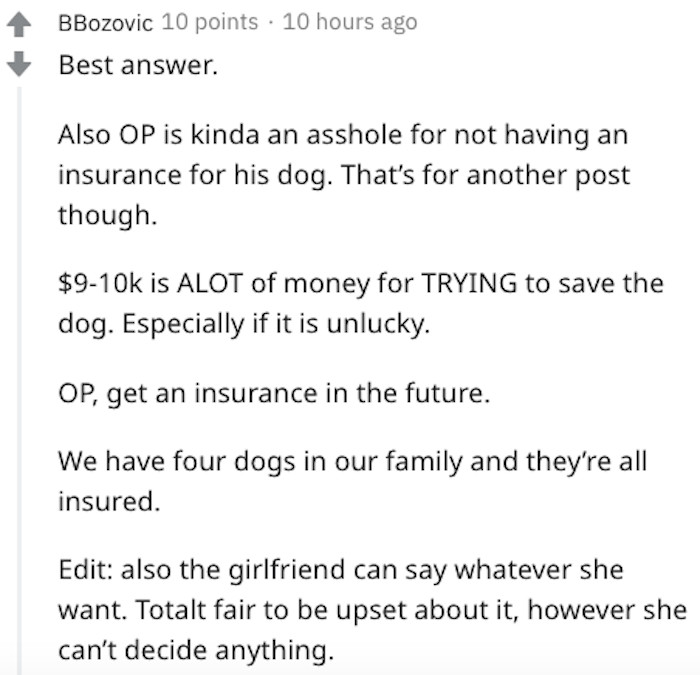 It looks like it’s not that important if the girlfriend has a point or not because it would be really hard to resume their relationship if he let his pet die. That is not something he would let go easily. And the OP agrees, judging by his update:

"If it came down to it I would of course choose summer over my gf. And based on our conversation last night it unfortunately seems like an ultimatum may be coming from her."