It's never easy working in shifts, especially when you have to deal with the frustrations of waiting for the next person to cover their own shift. While it is indeed a problem that they show up late, already taking away minutes or even hours of your time, it is even worse when they do not show up at all.

It is an unspoken thing to always be considerate with other employees when you are working in shifts because let's face it, you do not pay for their excess time. You need to be punctual and be responsible enough to let your managers or other employees know if you won't be able to make it to your shift—and never leave them hanging without any idea why you are not showing up.

You are not only putting the business in jeopardy but the time of the other employee as well. Unfortunately, some people just could not comprehend the fact that the world does not revolve around them, and that they need a reality check because another person is already sacrificing their time for their irresponsibility.

That's what happened to this particular Redditor under the handle u/DiamondUnlucky, who shared their frustrations and thoughts when they were waiting for another employee to come and replace them in their shift, but nobody ever showed up. They then called the manager to lock the store because nobody was on a shift to guard it, but even the manager was not answering her phone at all.

That being said, they just left the store and called the police to keep an eye on the gas station. Take a look at the highlights of the thread below.

OP said that other employees have started to phase themselves out lately and not show up to their shifts without any notice given to their co-workers and the manager. 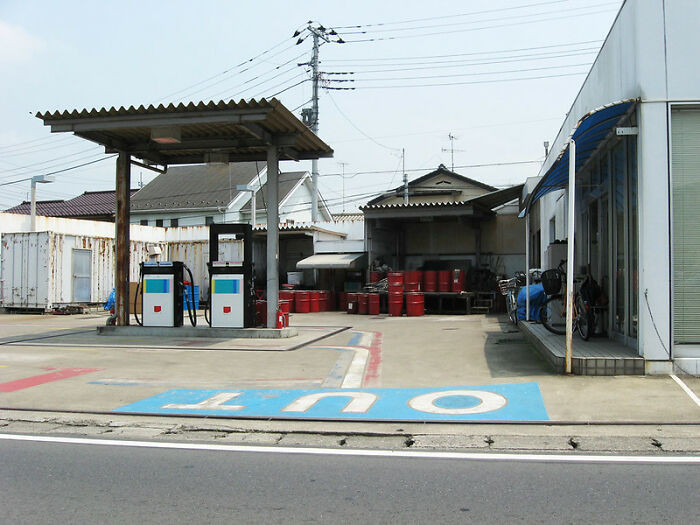 OP had a shift from 2 PM to 10 PM and even 15 minutes after their shift ended, nobody showed up to cover the next schedule. They had to report to the manager because there was no way they were going to work for another 8 hours.

They asked advice on how to protect themselves from the repercussions. 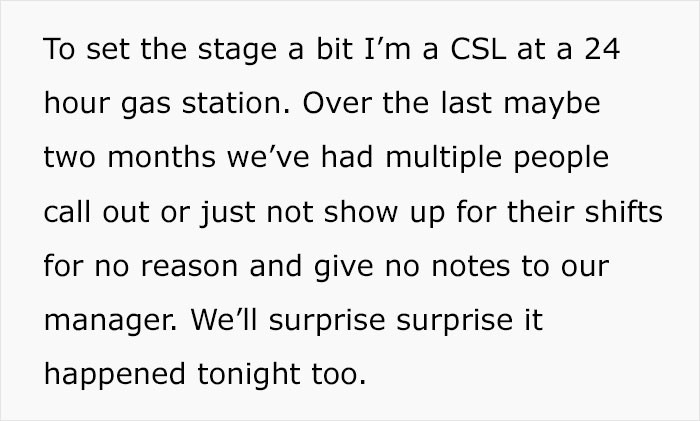 They called the manager, but the they were apparently sleeping. It was her husband that picked up the phone and he "promised" to try to wake her up.

He never called back, however. The employee then tried calling other co-workers to see if they can cover the shift but no one was available and some did not even pick up at all. 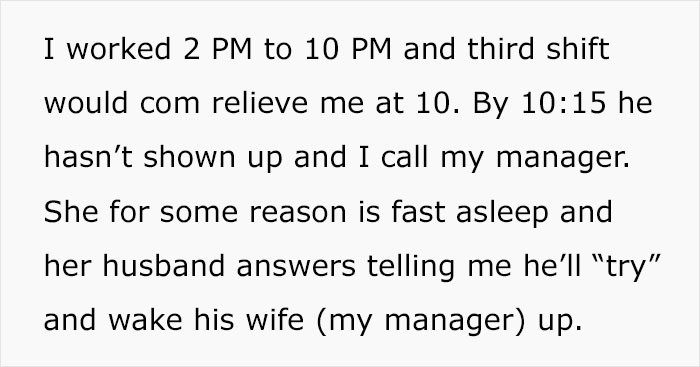 All the other times that this happened, the manager would come to the store and close it. This time, however, they weren't even waking up. 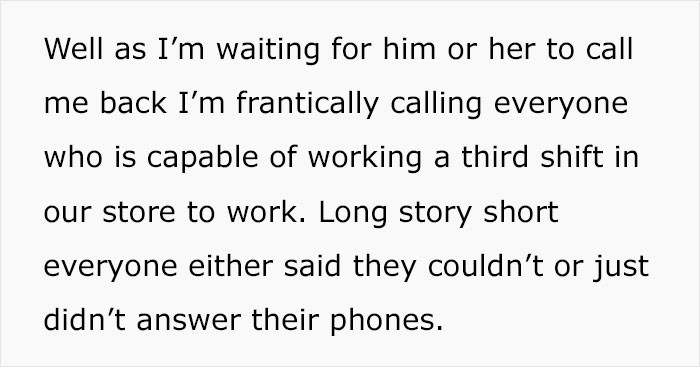 They had to abandon the store because there was no way they were going to work a 16-hour shift.

They had to call the police department to guard the store instead. 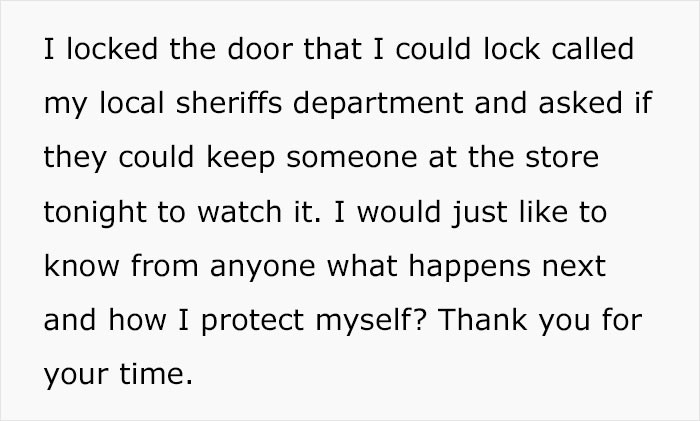 OP decided then not to come in to her work the next day. Payback maybe? 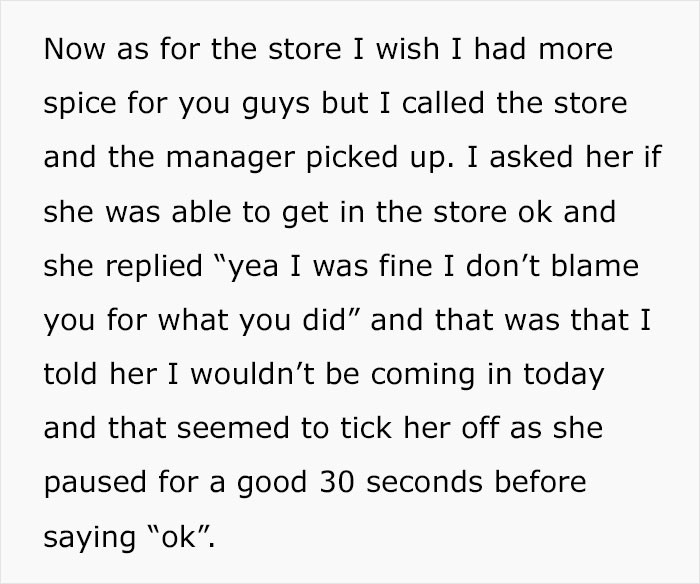 It's great that people finally find their worth as a worker, and not as some animal that can just be taken for granted.

The manager, however, texted the employee 'Do not tell anyone about last night'.

Guess she just did not want to wake up and did it on purpose, after all. 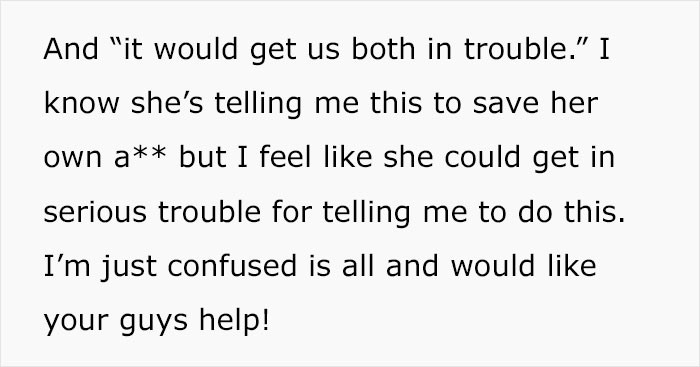 Take a look at what the people of Reddit have to say! 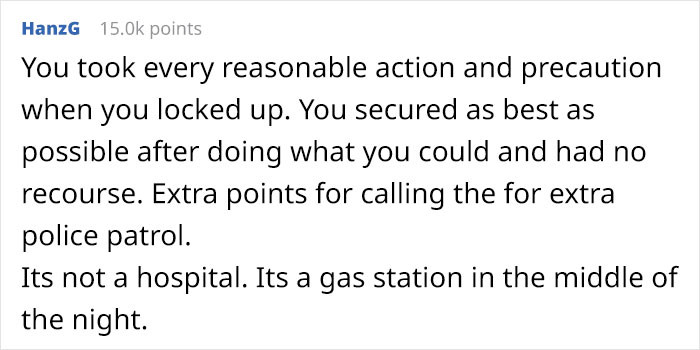 Nothing excuses the irresponsibility of others, though. Great job for what OP did!

The husband did not even call back to inform that the manager won't be able to go back.

Have documentation as your weapon.

It's sad how people have to suffer from this. 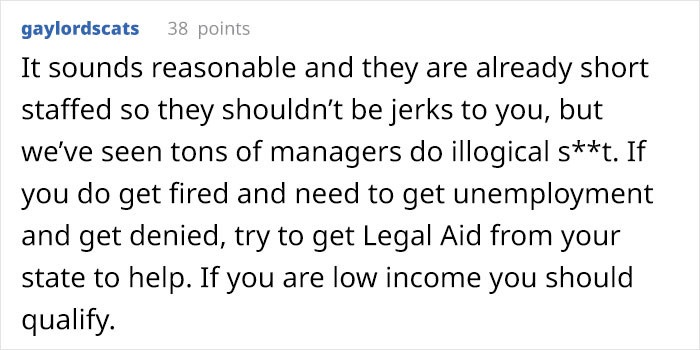 This user reminisced something similar that happened over twenty years ago.

Sucks to have no way around it, too.

Would you have done the same thing if you were in the employee's shoes? It truly sucks being in that kind of situation, especially when you planned a great sleep and rest for the night.