Accomplished author and famous blogger of "Everywhereist," Geraldine DeRuiter is a pretty proud and funny feminist who rather enjoys the time she spends on the Internet, namely Twitter, "fighting with people." (Her words, not mine!) Her work has been featured everywhere from CNN and The New York Times to The BBC and Oprah.com, she's a busy writer.

Recently, she turned to Twitter with a light-hearted post about The DC Comic universe's most popular villain: The Joker. DeRuiter mused a world where The Joker was a woman, pushed over the edge by misogyny into becoming some sort of chaotic opposition to the patriarchy. These days, most would expect that those suffering from toxic masculinity wouldn't handle even a joke at their expense very well, but it seems even DeRuiter was unprepared for the onslaught of responses... which she handled with the kind of humor her fans and followers have come to expect and adore most about her.

It all started out innocent enough.

Fan theories are nothing new, spins on classic stories are littered throughout every fandom on earth. But Geraldine's Joker story was set up to hit some nerves. Some very specific nerves. 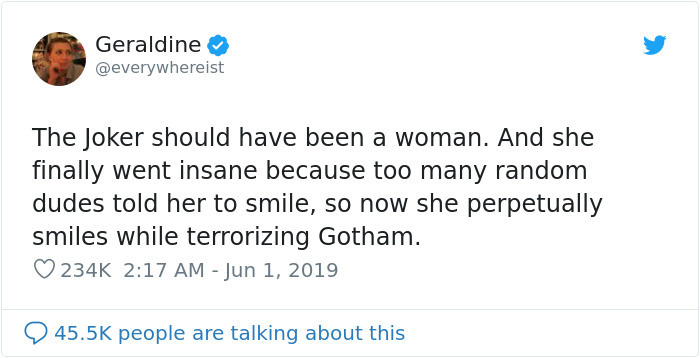 "Do you wanna know how I got these scars?" 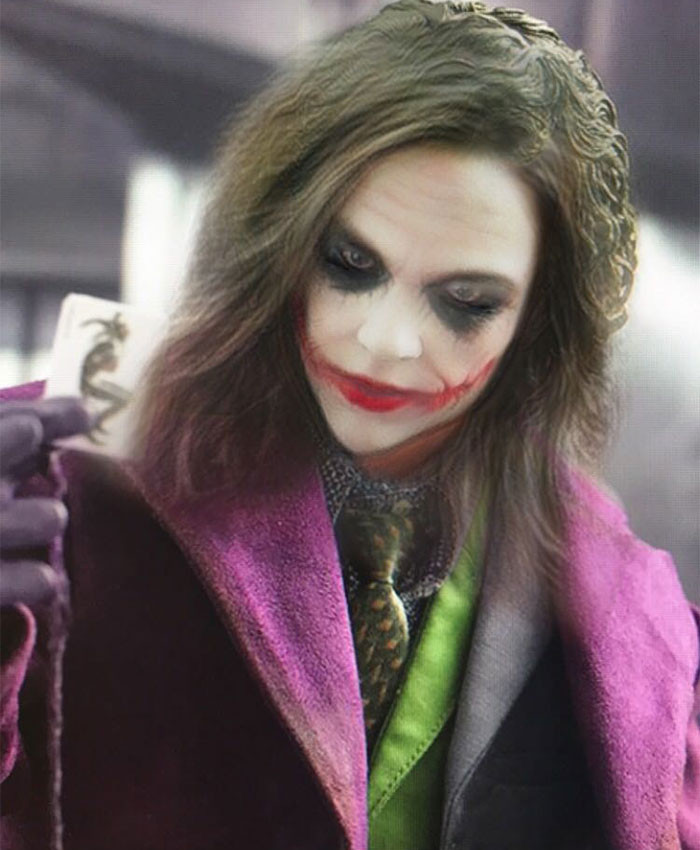 Is this chaotic good?

Geraldine's Joker sounds more like an anti-hero than a villain. 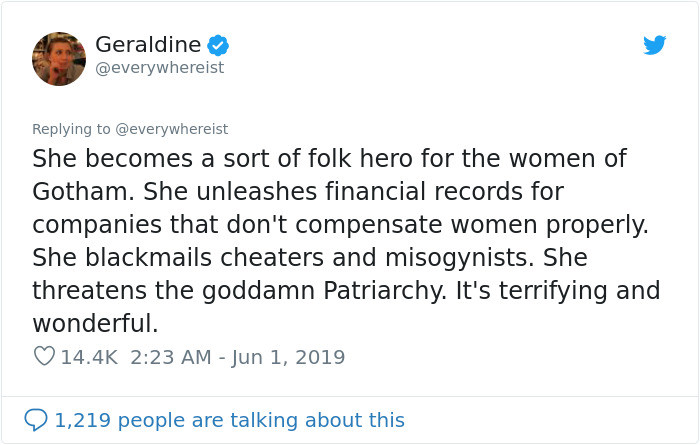 The Batman is conflicted in this universe.

This was the final nail that really added a humorous element to Geraldine's Joker.

Naturally, the responses began flooding in. 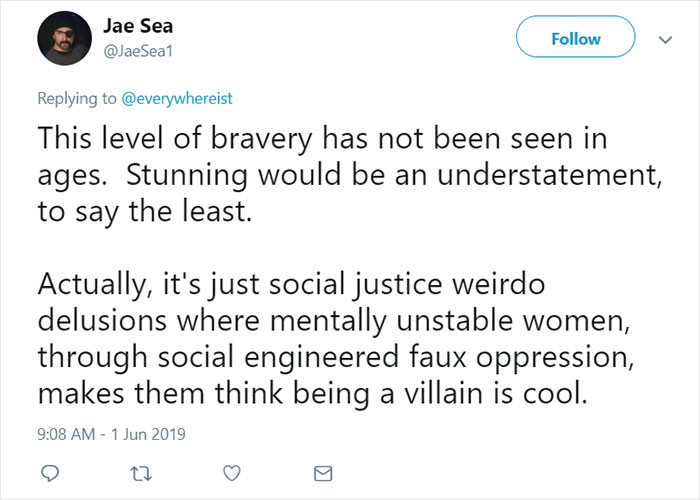 Not all fan theories are created equal, I guess.

And for this one, some people think Geraldine shouldn't exist anymore.

Get used to this guy.

He just couldn't let go of the thread for the life of him.

That's not misogynistic at all.

I'm sure he thinks this is a fact.

And how did Geraldine respond?

She delighted in the moral outrage.

I appreciate the clown emoji on this response.

It adds a new element.

Did you know you're only allowed to be upset about the worst things happening in the world? 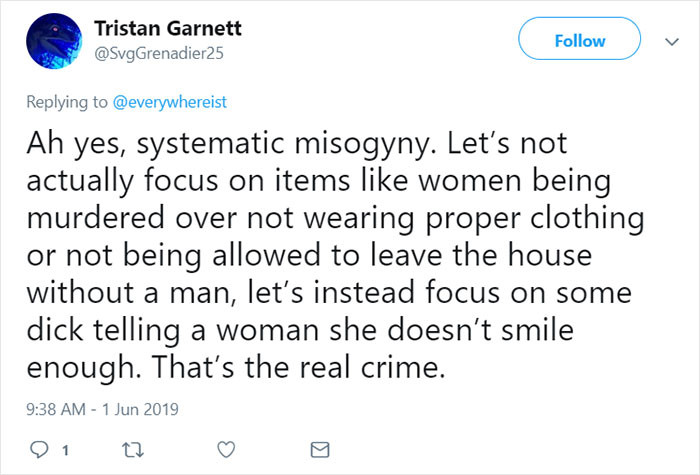 Simple responses rolled in, too.

Hey, fan theories aren't for everyone.

And Geraldine loved all of it.

She was completely un-phased by the negative responses that only intensified.

I could see this.

I'm not saying I ship it, but I could see it. 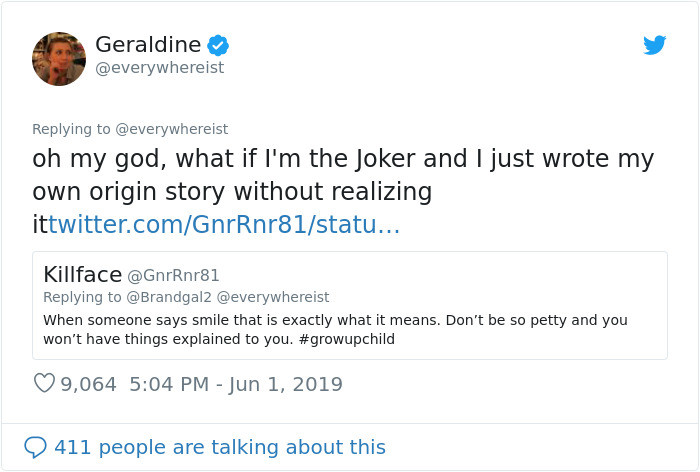 If a single tweet could upset so many men, imagine casually being told to smile by random people every time you're walking down the street. It could drive a woman... insane... oh wait, that's Geraldine's plot, sorry.

Now they're making things up. 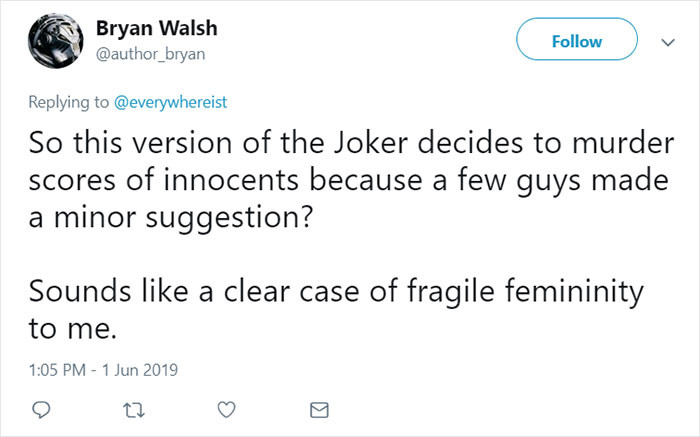 It must be tough, mustn't it, men of Twitter, responding to Geraldine?

This one made us LOL

I mean, isn't what everyone does on the Internet publicly some degree of "attention whoring?" 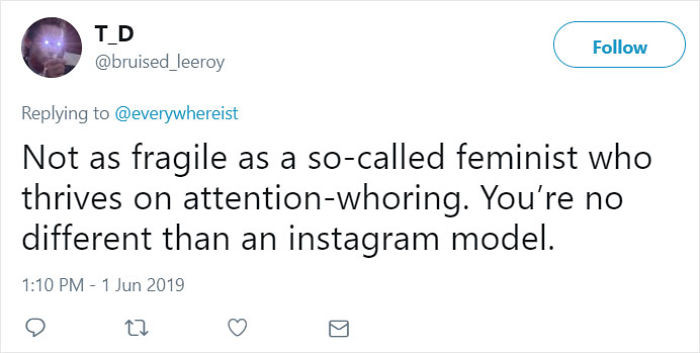 "Stop reading into everything."

Thanks for explaining that, bro.

I wouldn't be surprised if she typed responses up while sipping from a coffee mug labelled, "cis hetero male tears." And I wouldn't blame her. But I'd like to see the photo.

Why are women and liberals painted as the hysterical types when a silly fan spin off tweet about a villain upsets so many dudes? We may never know. 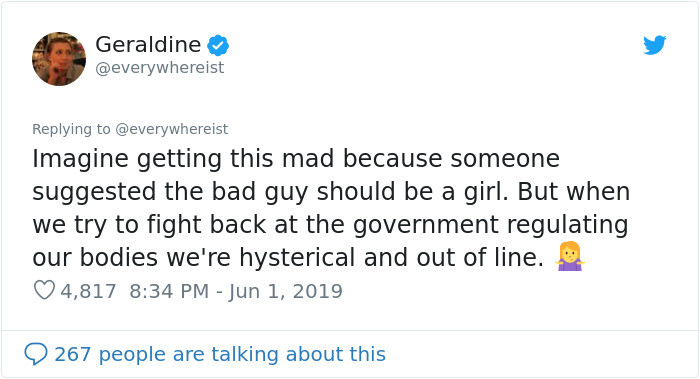 Don't you know, no one is forcing you to smile? No sh*t? 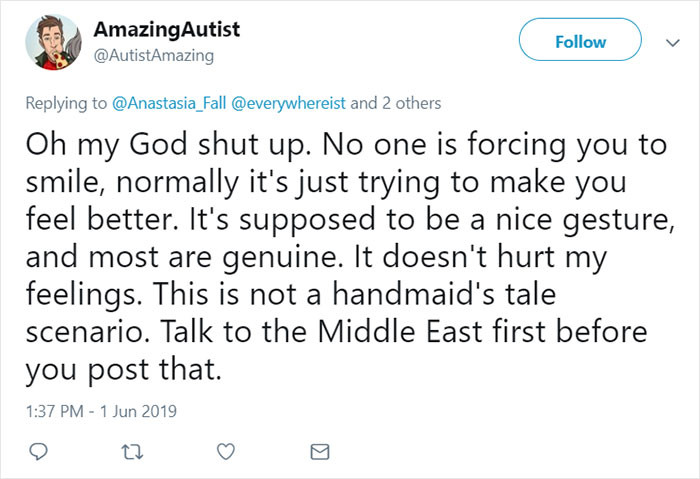 There's a Bingo for everything these days but this one is new.

Someone help this poor man.

This guy is definitely not upset.

And he clearly isn't a misogynist.

Geraldine did not back down.

Her humor with each response only rose exponentially, perhaps because to some degree a point was being made? Perhaps.

How could they resist?

"Let me explain something to you, little miss."

The same people who think this way will usually defend criticism as not being an issue of hate, but okay.

And the men continued to feed into it. 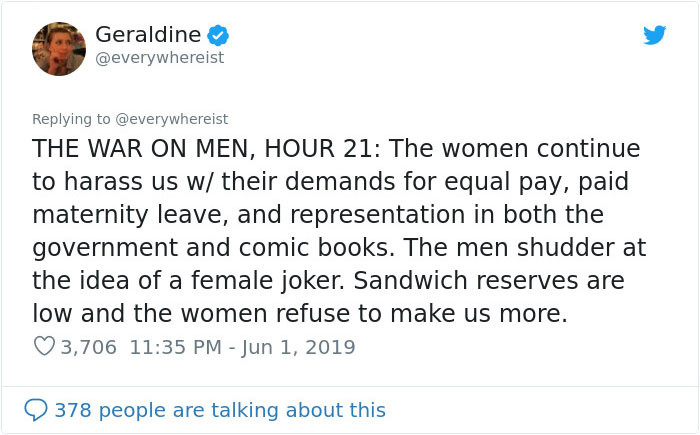 Not to be left out of the conversation...

Several people decided, "this idea of a female joker already exists and we simply cannot have more of these stories." 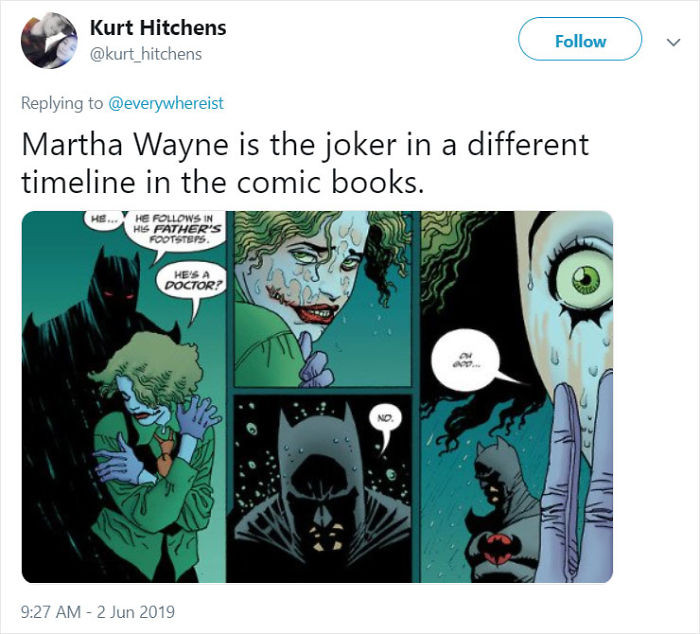 No, definitely not. Never. Women don't know these things, don't YOU know?

Sorry to burst your bubble but a female joker has already existed.

And we're simply not allowed to continue to re-write stories and backstories and plots when it comes to comics, that's a BIG NO-NO. *wink* 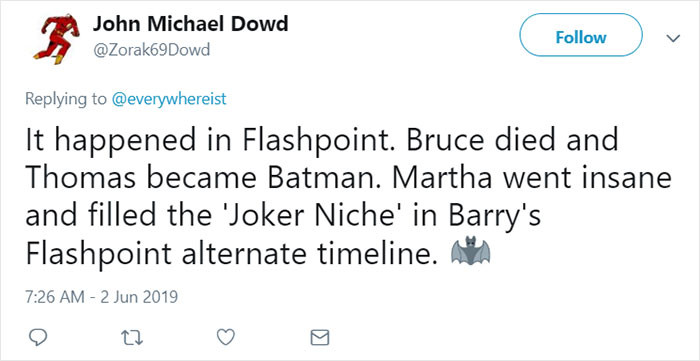 Geraldine picks up what they're jiving...

And knows they're full of dog-doo. 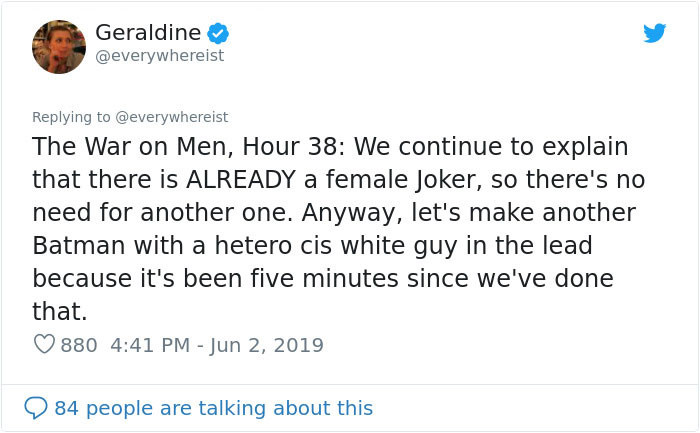 And then she made the Misogynist Bingo card. 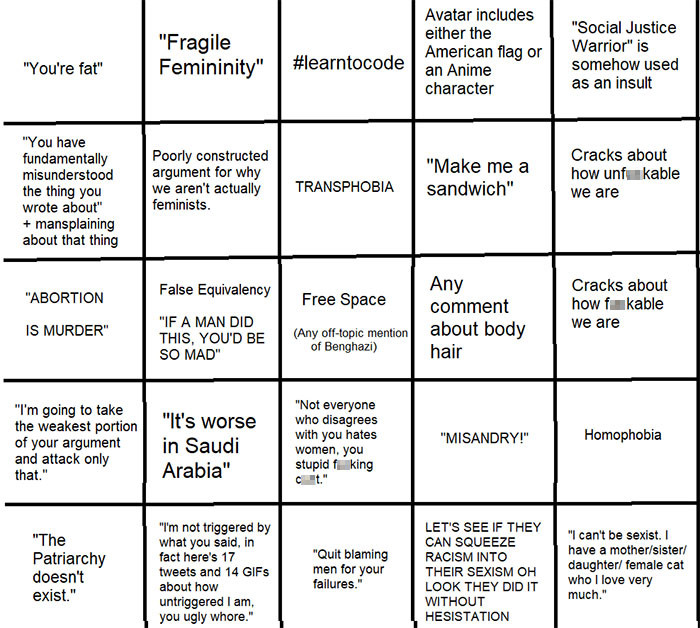 She was quite proud of it.

We don't blame her.

That's the only way to troll Twitter, with no regrets.