Guy Gets High And Spends Three Hours On What He Thought Was Mowing The Lawn, But Turned Out To Be A Joyride

We need to be alone sometimes, and it is completely natural and understandable. What would you do if you were home alone for the first time in seven years?

This question is so easy to answer for the younger crowd, but what about family men? They are used to specific family dynamics, errands, housework, homework, taking kids to baseball and ballet practices…. but what do you do when someone takes that dynamic from you, just for a weekend?

What do you do then? No errands, everything is quiet…

You are all alone with your thoughts… Oh boy.

They say that an idle mind is the devil’s playground. This is so true.

All alone after seven years -it’s a frightening thought, isn’t it? Well, not for a Reddit user going by the name u/scrotes_magotes.

He had grand plans for his “home alone” weekend. But somehow, it didn’t go exactly as he planned. He posted an interesting story about how he spent a weekend when his wife and kids were away.

He really had a good time. So let’s take a look at his story. It’s a wonderful example of what not to do when you are home alone. And middleaged. And high. 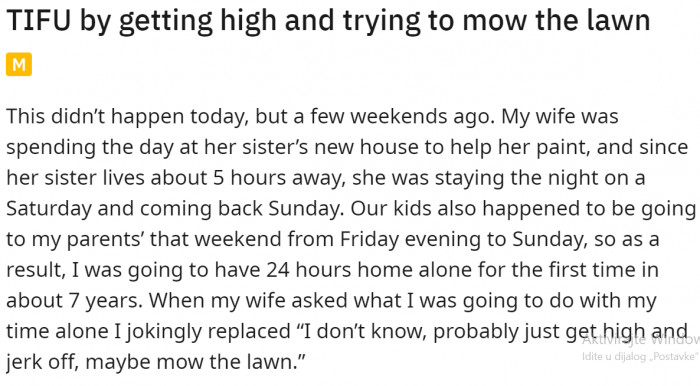 It started off great

Edibles are cannabis-based food products. They come in different forms, from gummies to brownies, and contain either one or both of marijuana’s active components: THC (delta-9-tetrahydrocannabinol) and CBD (cannabidiol).

With the legalization of cannabis, edibles are gaining popularity. CBD-only edibles have even been found to help treat ailments such as anxiety and chronic pain. As an added benefit, edibles don’t pose risks to the respiratory system — unlike smoking the stuff.

Cutting grass is the next logical step

There are also some differences between edibles and smoking and vaping regarding their effect on the user. The “high” from edibles can often feel more intense and last longer than a user gets by smoking.

Edibles also take longer to kick in. That often makes people take more than they should because they think it's not affecting them at all. And when they start to kick in…. Oh boy.

It’s a big property -should be fun!

Where is the problem?

But he did manage to mow the lawn eventually 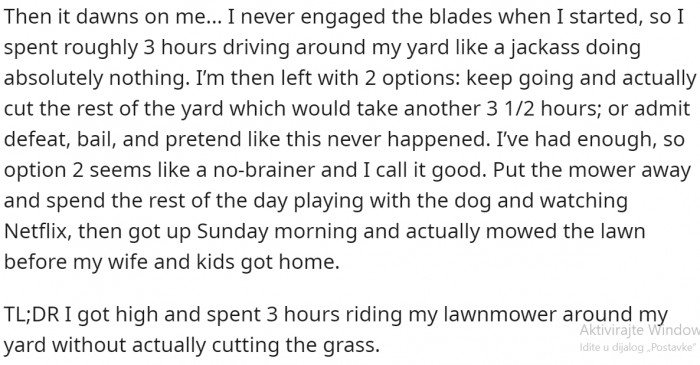 It could’ve been a lot worse. He could’ve mown the neighbor’s lawn (unsolicited). Seriously now, the OP could’ve had injured himself.

But it turns out that what he did wasn’t that uncommon. So let’s take a look at what other people in the subreddit said.

Yeah, that is kind of a downer.

It depends on the person...

What's the timer for?

He must be my neighbor too

It turns out it’s a common thing

Vacuuming is tough when you are high.

Yes, you could say the OP was lucky

Go-cart around the yard

Engine needs to run to cut the grass...

Well, it has been an interesting ride - literally. The OP was very fortunate he didn’t injure himself.

In one study, 9.7% of cannabis users reported having driven under the influence in the previous year. We wonder how many people drive their lawnmowers when they are high. Well, at least one...