Mom Asks What Our Kids Names Would Be If They Were Named After WHY We Had Them, Twitter Delivers Hilarious Responses

We live in interesting times where some people are trying very, very hard to have children. So much so that they are spending thousands upon thousands of dollars to try and make it happen. At the same time, there is a metric ton of children who are, well, surprises. There are many, many reasons to procreate in this day and age, sometimes we plan and pray for them, other times they take us by shock and surprise, and even then, sometimes they just sort of fall somewhere in between the spectrum.

One mom turned to Twitter to spark a hilarious conversation wondering, "what if we named our kids after the real reason we had them?" Would your children be named IVF or would they be named Skipped A Pill and Netflix N Chill? The responses that rolled in were sincere and hilarious, far more so than expected.

Hey, parents! What's up with those names?

Some antibiotics can interfere with the effectiveness of some birth controls.

Okay, that's not a fun fact.

They grow up so fast.

Brings tears to my eyes.

Sometimes it's the book club's fault you felt frisky.

Imagine try to explain this to your kids.

Too good of a time, apparently.

Those ad campaigns failed them.

It was a good tiime.

Then it was a not-so-good time.

I wonder how much she tipped the esthetician?

Because they obviously did a fabulous job. 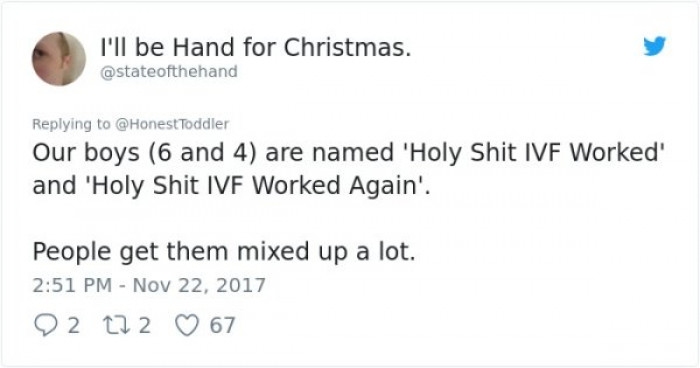 I wonder if this is related to their soon-to-be third child, who will possibly be named, "vodka was on sale."

Before you have kids, make sure your Saturdays are packed with entertainment and condoms.

My favorite is the 4th kid's name.

I can relate to it.

Ah, a moment of opportunity!

They know the truth.

Best friends love to get pregnant together!

I mean, why wouldn't you?

This Twitter user offered a valuable lesson to the parents of Twitter who weren't ready for kids.

Stark contrast from each other.