It's a known fact that when people unexpectedly come into a large sum of money, it will bring people out of the woodwork you may have never expected, and it will also show the true character for others.

In this day and age, many are looking for hand outs. And undoubtedly complications arise when it comes to those that are already prominent in your life.

Especially if you're in a situation where you're already splitting the financial burden prior.

One Reddit user in particular (who will remain anonymous) was dealing with this situation exactly after she inherited $4 million dollars from her grandfather's estate when he passed.

“My grandpa passed away a few months ago and I inherited a little over $4 million from his estate,”

“I had no idea he had that much money and was honestly not expecting to receive anything, as I assumed it would all go to my mom, she wrote.

However instead of blowing straight through her financial security, the OP decided she should probably be responsible with it instead.

So she did her calculations, and came to the consensus that she could live off of $40,000 a year for the rest of her life. Then she did what any smart woman would do, especially considering she was unwed; she quit her job and chose to pursue her hobbies and interests.

Such as art, music, and gaming to name a few.

"I'm pretty introverted." she noted for everyone, so she would absolutely be content staying at home all day long.

Oh no, but then her boyfriend chimed in, and said that it was unfair of her to only support herself and refuse to also cover his expenses. FACE PALM.

"Ever since I inherited the money, my boyfriend has been pressuring me to cover all of the rent and utilities (about $1200 a month) for our apartment and start putting money away into a joint savings fund,” she wrote.

She did add that she would feel differently if they were married, but since they had only been together for a year and a half, she decided she would roll with her plan and see how it panned out.

"I still pay my half of the rent every month and have started paying for a housekeeper to come in and clean a few times a week, so our apartment is nearly always spotless and looks great,” she said.

But apparently her boyfriend had a clear difference of opinion and claimed that, "wasn't enough" and even went so far as to consider her "selfish for expecting him to still contribute to rent when she could easily afford to pay for the whole thing."

Let's get real here. I'm sure she wasn't like, OHMYGOODNESS no, I won't help you financially at all. She just wanted the dude to continue paying his half of the rent.

I mean, they were splitting finances before, so what's the problem?

Entitlement. Which is pure bu!!sh!t.

They were not married, he has no legal ties to her or her money. If they signed a lease together, he should absolutely have to continue contributing.

This dude straight up hasn't even set aside money for an engagement ring, nor as he made any life promises to her, yet he expects HER to take care of HIM?

Of course her fellow Redditors had plenty of opinions on the matter, and well, she did ask for them!

“I’d be wary of marrying him though at this stage if this is his instant reaction to your finances,” warned u/playhookie.

The words were taken straight from my mouth! 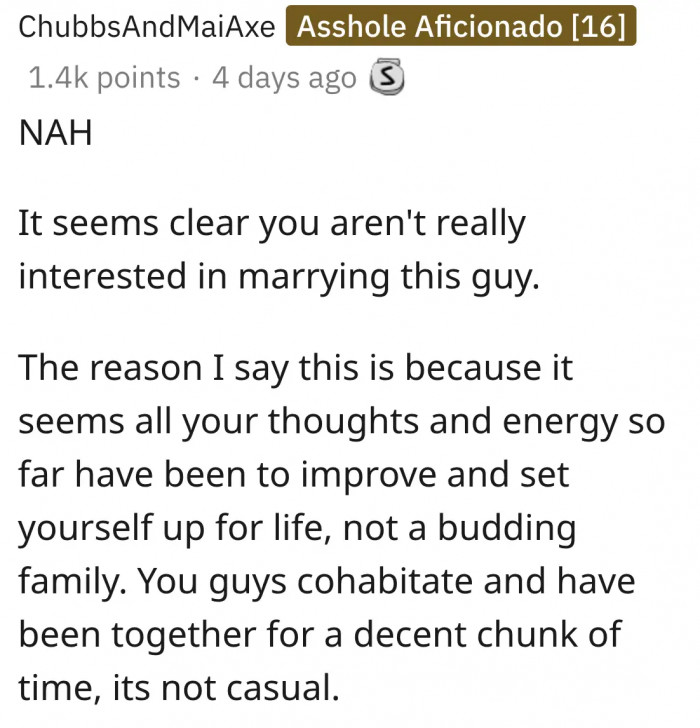 I mean, no, things clearly aren't casual. However that doesn't mean that the sudden change in HER life directly also revolves around them as a couple.

Again, this guy hasn't even proposed. So he hasn't even come to the conclusion that he wants to spend the rest of his life with her.

Would he expect her to pay more rent if she got a raise and suddenly made more money than him?

This. I can get behind this for sure. 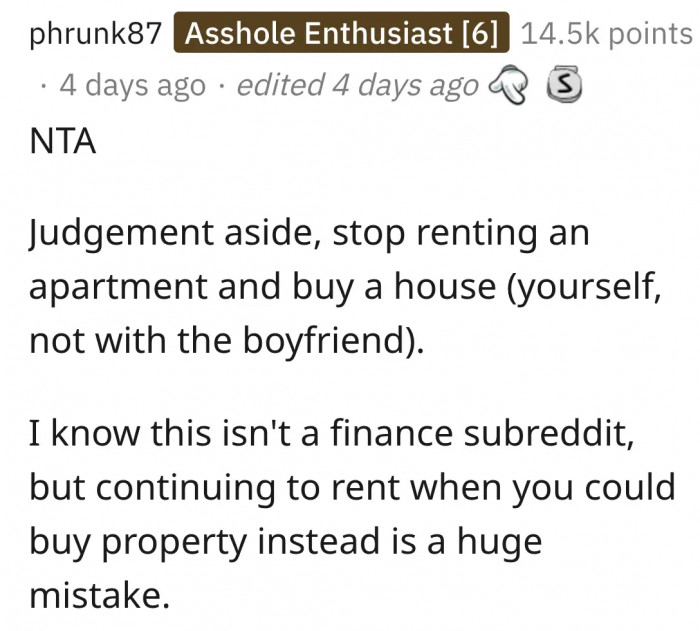 Allllll of the yes. His behavior is gross to say the least. 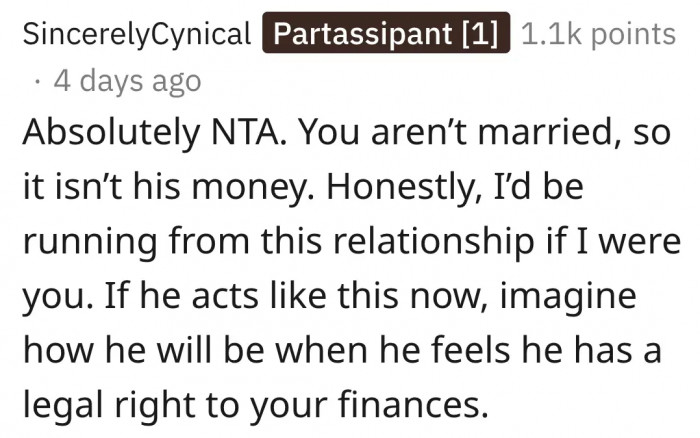 Everything is about perspective, so some users did understand where her boyfriend was coming from. And even still, they didn't think she was being a jerk about the ordeal.

“Imagine your SO inherited $4million and quit their job to pursue hobbies and interests. You work 5 days a week, coming home to find your SO playing video games and painting, you’re still expected to pay half the rent and utilities,” posed u/b_rouse. “There will be resentment, with this big of a lifestyle change.”

Yes, I can see this too. However, his resentment is not her burden to bear.

If he couldn't handle it, then apparently they're not life compatible. Which is precisely why she didn't offer him a free life-ride.

It boils down to entitlement.

And he is entitled to absolutely nothing.

Ohhhh but you know some users also straight called her out.

Um, they were just dating. There is no legal recquirement that states she is financially responsible for him. E N T I T L E M E N T. At it's finest. 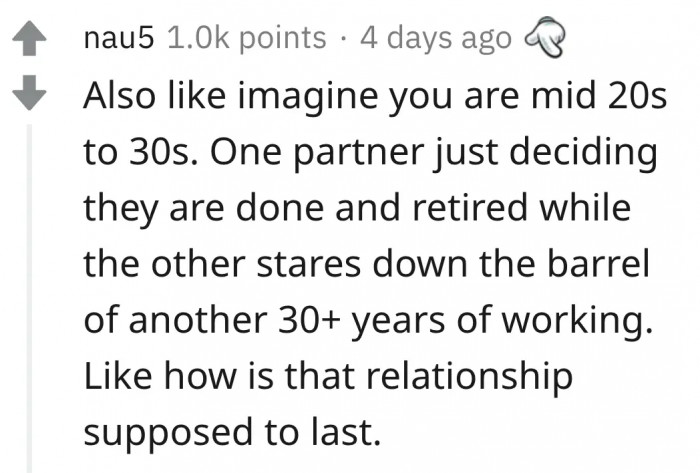 I mean, but she has every right to be. Did she say this was her plan if they did decide upon marriage. No? Ah. 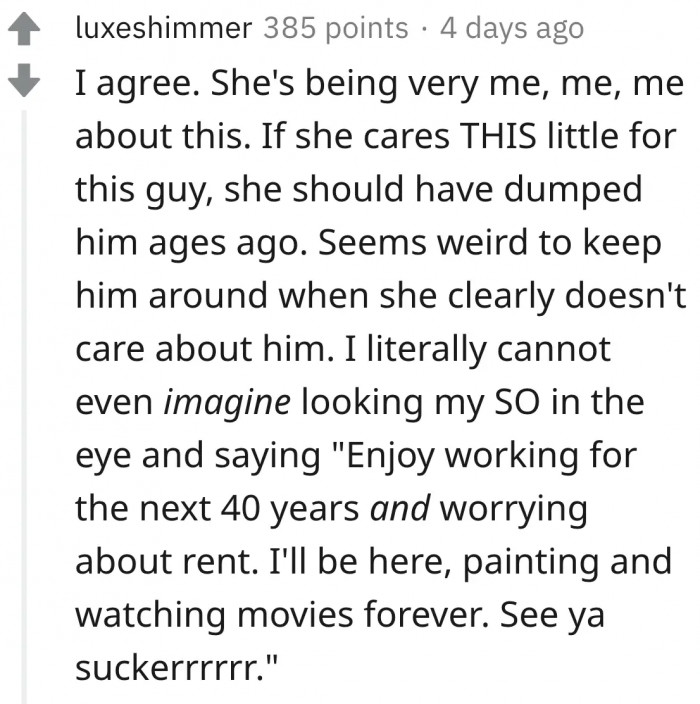 Honestly, I hope she finds someone more supportive. That dude can kick rocks. 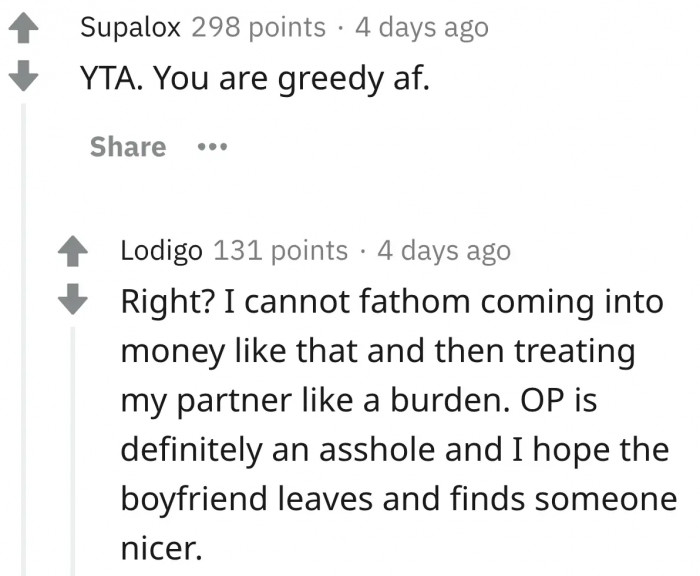 Overall, the main tid-bit of advice outside of her boyfriend situation was probably the most important of all.

“With that kind of money in the bank you desperately need to see an estate planning lawyer,” wrote u/Fraerie.

In all honesty, I wish her the best of luck and I hope she finds a man that would be willing to live in a box if it meant simply being with her.

I hate how money has overtaken the world and changed people's views of one another.

What do you think about this situation? It's definitely unique.

Be sure to let us know your thoughts in the comments!