TikTok user Lily, aka Big_big_simp, recently sparked an interesting conversation when a video of hers went totally viral. Videos go viral all the time on TikTok, it's a fast-paced and creative social media platform after all!

Lily's video was about embarrassment, but not just any old embarrassment (the kind that makes sense, like realizing you just walked down the street with your skirt tucked into your underwear or tripping on the staircase in front of hundreds of people on your way to accept an award,) her video was about things being awkward and embarrassing for no real reason what so ever.

Despite everyone resonating with Lily's video so intensely, she said she didn't expect it to go totally viral. In an interview with Bored Panda she said:

"One of my friends actually inspired me to make the video. My friend and I were talking about things that we think are embarrassing and I decided to make a TikTok video about it."

Other TikTok users rolled in as the video gained millions of views, thousands upon thousands of comments and likes. These are some of the most relatable responses!

"I think that people find these kinds of things embarrassing because you feel like everyone is watching you. The best advice I could give is to try and ignore everyone else and just focus on yourself," she told Bored Panda. 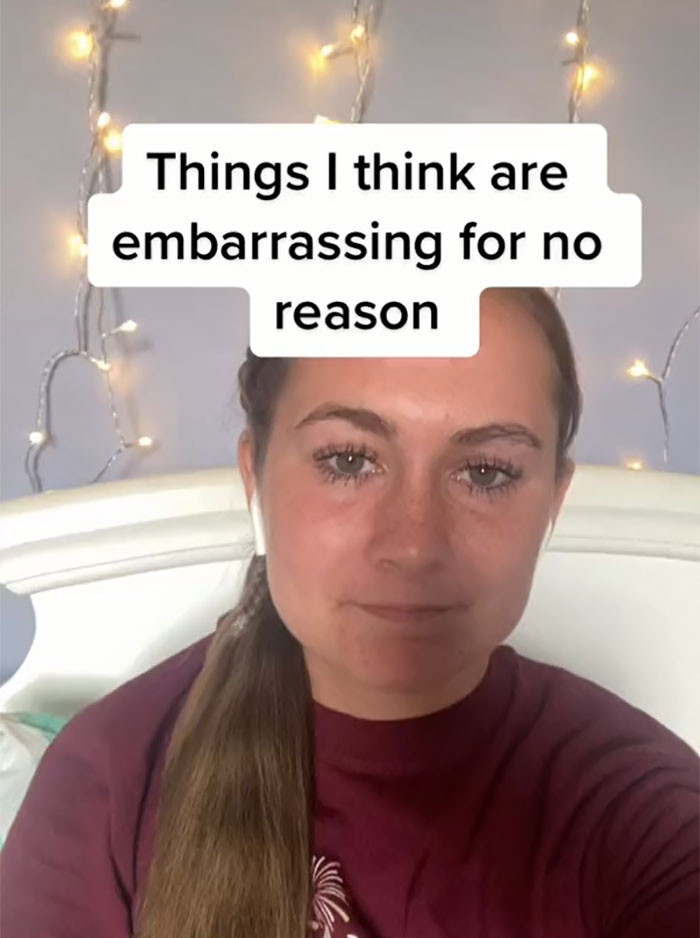 1. "Sitting there while people sing you happy birthday"

2. "People watching you do things then it makes you forget how to do things normally"

3. "Pretending to need something else at the groceries until the person moves out of the way of what you actually need"

4. "When your chair moves and makes a fart noise and then you have to try to recreate it to let everyone know u didn’t fart"

5. "Walking out of a store without buying anything"

6. "You say bye and you both walk to the same direction together"

7. "Opening cards trying to act like you don’t see money in there"

8. "Walking back after bowling"

10. "Introducing yourself to the class on the first day."

11. "When you see someone coming your direction from super far away and you have to awkwardly wait until theyre close enough to smile or say hi"

12. "Somone holding the door open for you but you're still a bit far from the door"

13. "When someone knocks on the door while you’re in the restroom & you have to answer so they know you’re in there"

14. "Parking next to someone sitting in their car."

15. "Walking up the stairs in front of someone"

16. "The worst one is looking for someone in a restaurant who is already there but you don’t know where they’re sitting"

17. "I get embarrassed the most when I speak and no one hears me then someone goes WHAT"

19. "When your stomach growls is the worst"

20. "Entering a elevator with a bunch of people and the whole time it’s silent."

21. "Turning around and walking the other way."

24. "Pushing your grocery cart to only realize you got the squeakiest/loudest cart"

27. "Walking at a crosswalk with a car stopped"

28. "When you’re backing out your car and someone is waiting to take your spot"

29. "Walking past a group of people the same age as you"