After A Lot Of Outrage, The Dictionary Destroys Any Claims Of ‘Boomer’ Being A Racial Slur

The relationship between Millennials and Baby Boomers has been a nightmare, they never seem to agree on anything and if you add Gen Z to the mix, things get even worse.

It's true that generational relations have always been broken, but this time it's way worse than anyone expected. It began when teens started replying by “Ok, Boomer,” on any comment made by a clueless older person making remarks about our modern world today. Especially whenever they insist on telling kids what exactly they're doing wrong in life.

Soon after that, this so-called "slur" started spreading rapidly and a lot of people started claiming that “Boomer” is a slur for a “minority group.”

I don’t really have a nickel in the “ok, boomer” dime, but imagine thinking “boomer” was the world’s first ageist slur. pic.twitter.com/vt4qLj3tV2 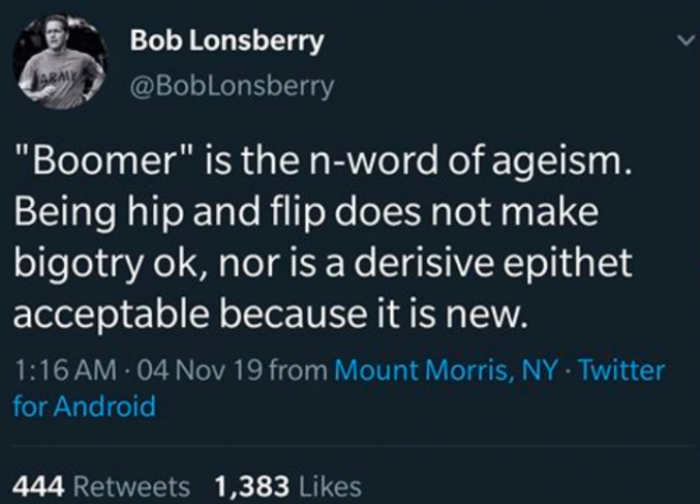 Thankfully, Dictionary.com stepped in order to clear out any confusion, then proceeded to give a formal definition of the word boomer. Try harder next time, boomers.

Boomer is an informal noun referring to a person born during a baby boom, especially one born in the U.S. between 1946 and 1965.

The n-word is one of the most offensive words in the English language. https://t.co/30OAf7N83e

There Is An Entire Subreddit Devoted Purely To Calling Out Karens, And These Are The 35 Of The Best Posts