Polish Artist Paints Nightmares And They're Both Beautiful And Terrifying

Zdzisław Beksiński was a Polish born painter, photographer, and sculptor. In his early adult life he studied architecture and for a brief time was a construction site supervisor where he would often use leftover and discarded material to create sculptures. Unhappy with his career, he went on to focus on some seriously iconic and unique artwork, primarily his paintings known for their "dystopian realism."

Before his tragic murder in 2005, Beksiński was no stranger to death and misfortune. His wife, Zofia, died in 1998; a year later, on Christmas Eve, his son Tomasz committed suicide. Despite his grim artwork and his unfortunate life events, Beksiński was described as "a pleasant person who took enjoyment from conversation and had a keen sense of humor." Today, while we look at his intriguing art, we are left to interpret at will, because Beksiński himself was not fond of offering answers to what his work "meant."

The pain of losing the love of your life must be unbearable. 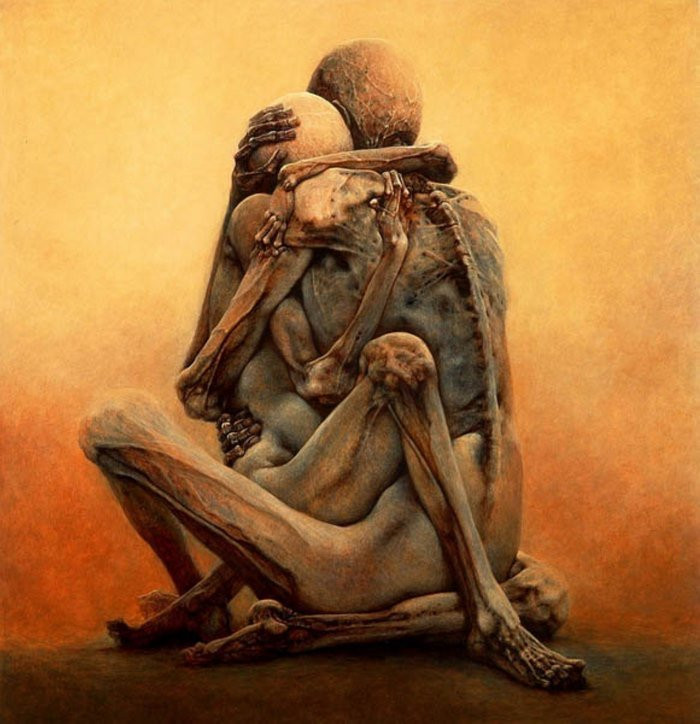 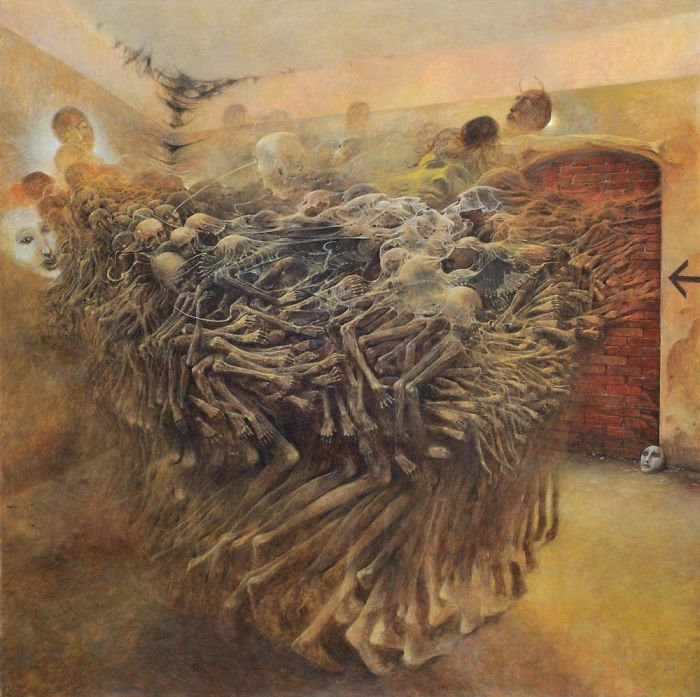 Is there always another way? Another path? 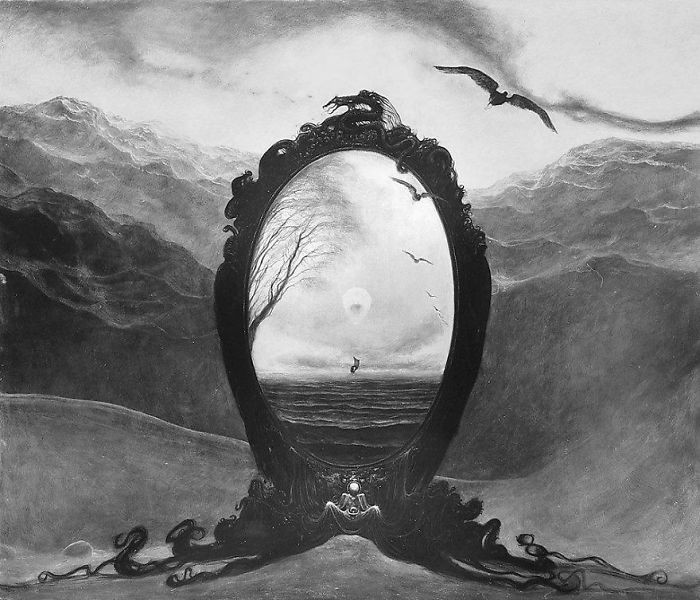 Judgment is all around us. 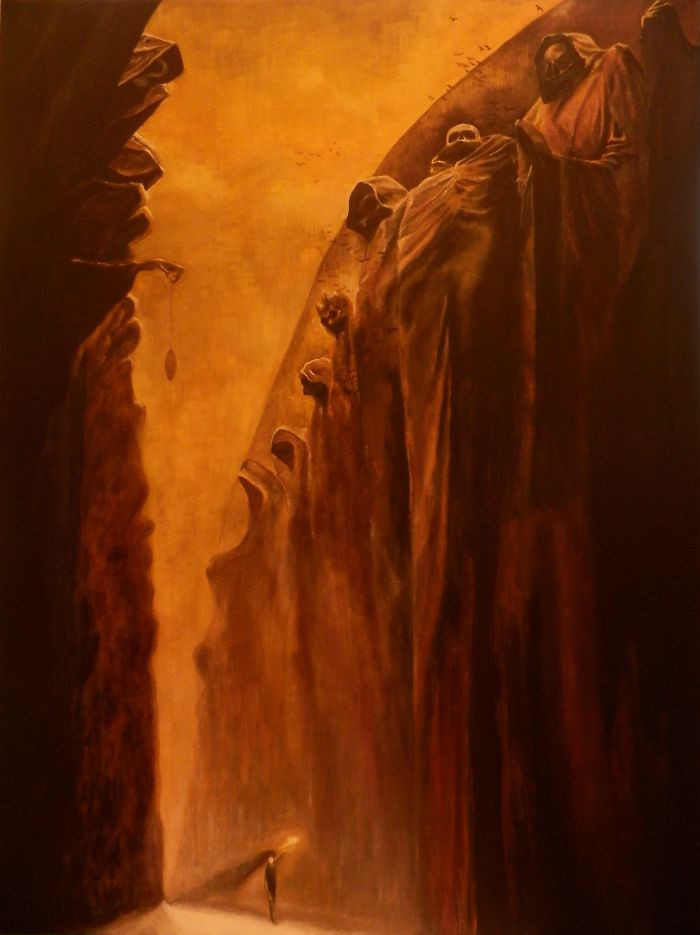 A dark desert or a lonely post-apocalyptic scene? 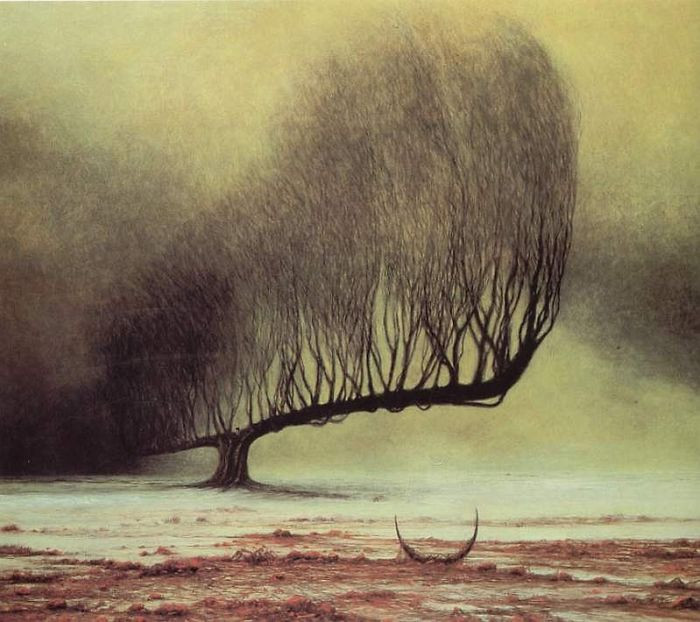 If you could walk up to a wall of death, would you? 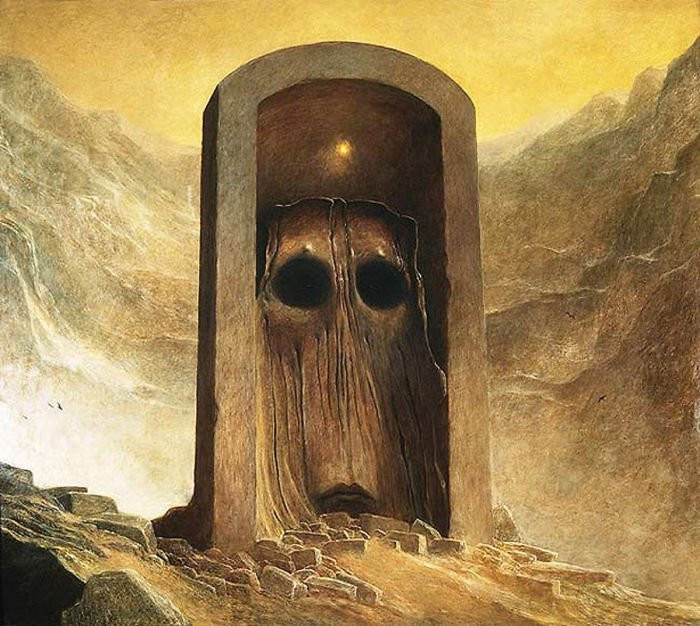 What is this burden on the artist's soul? 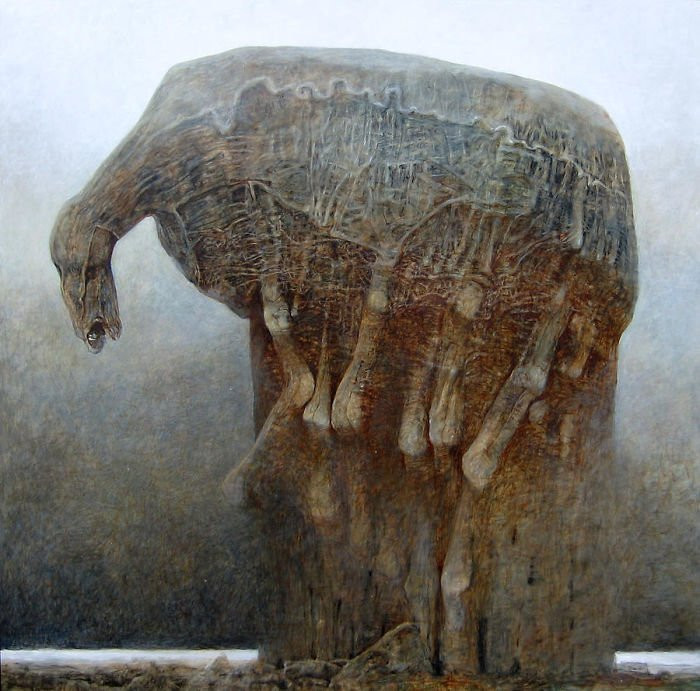 Or a hill with countless portals to Hell? 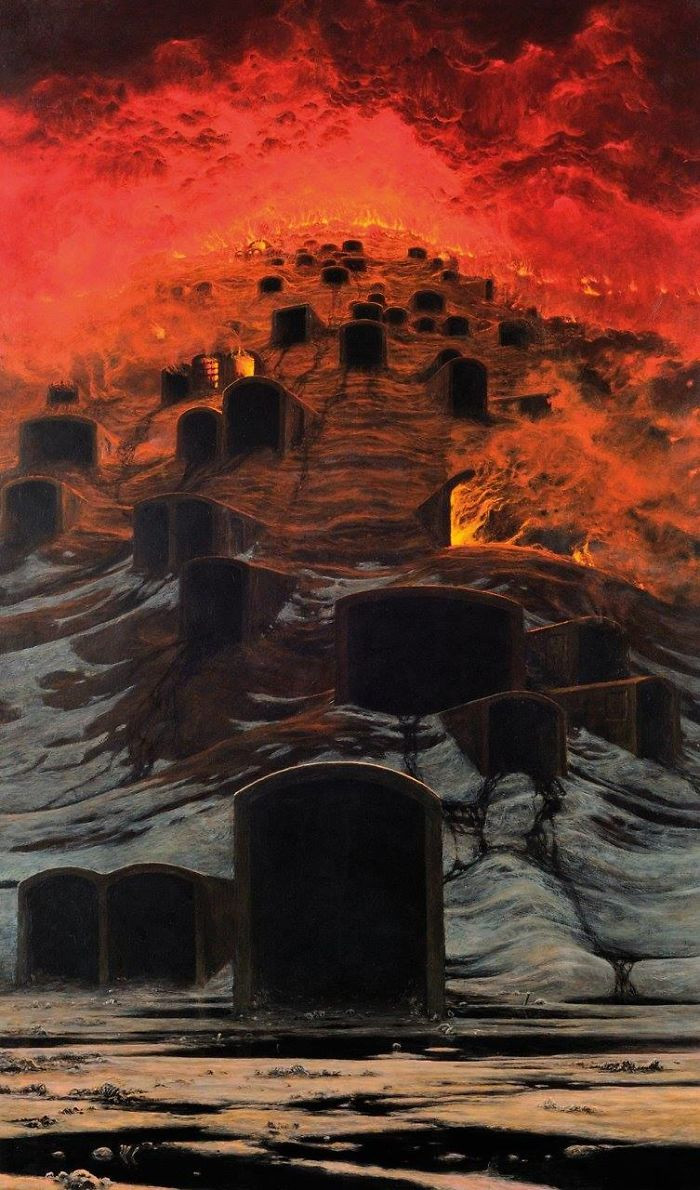 Dark, mysterious figures loom in so much of his artwork. 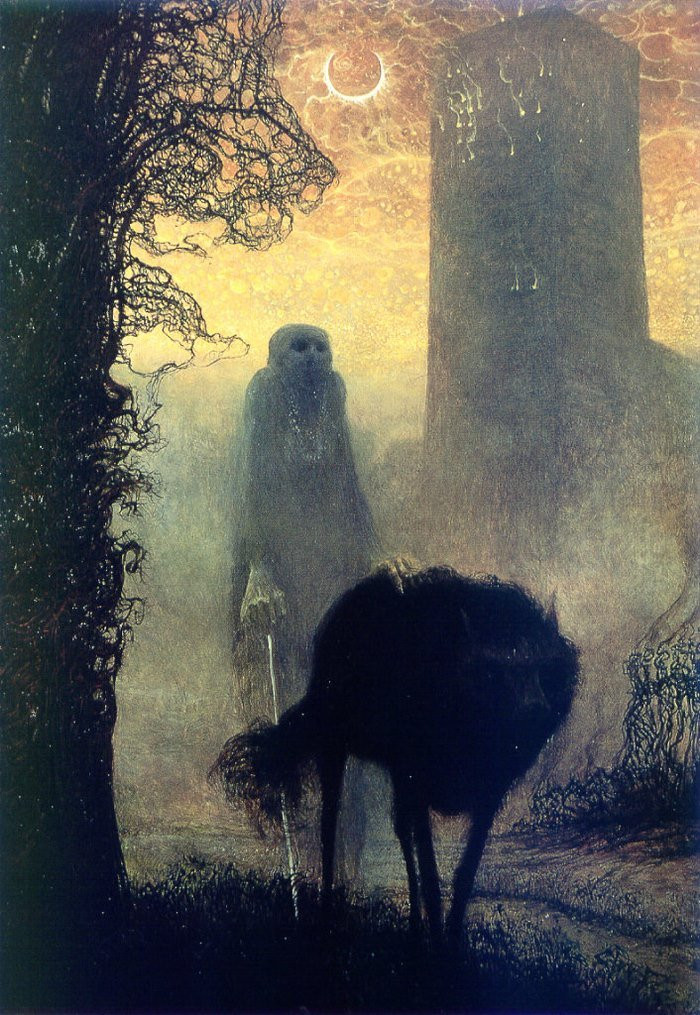 Or evil, we're not sure. Maybe a little bit of both. 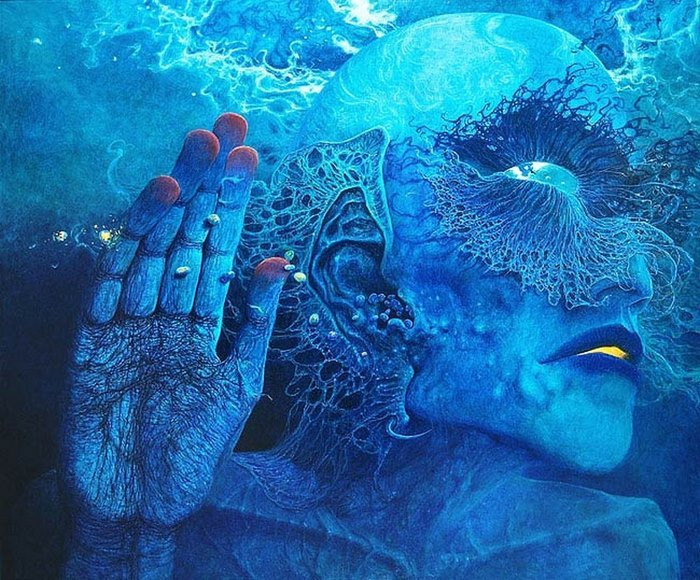 Death, loss, longing. Is this piece of artwork a symbol from his life experiences? We will never know. 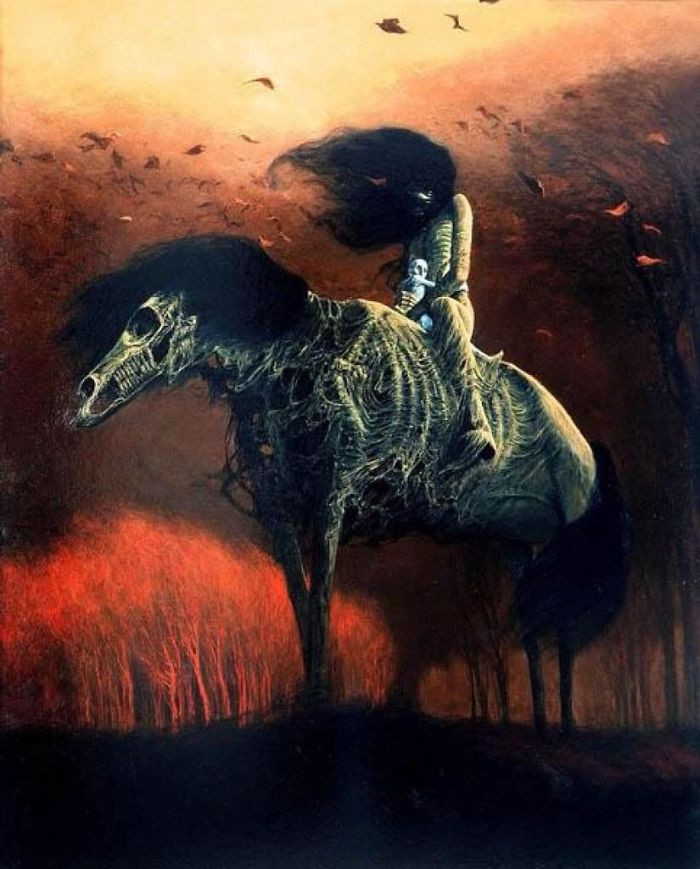 If this wasn't a polish painting, you might think it was an art board from an upcoming horror flick or video game. It's dark and eerie. 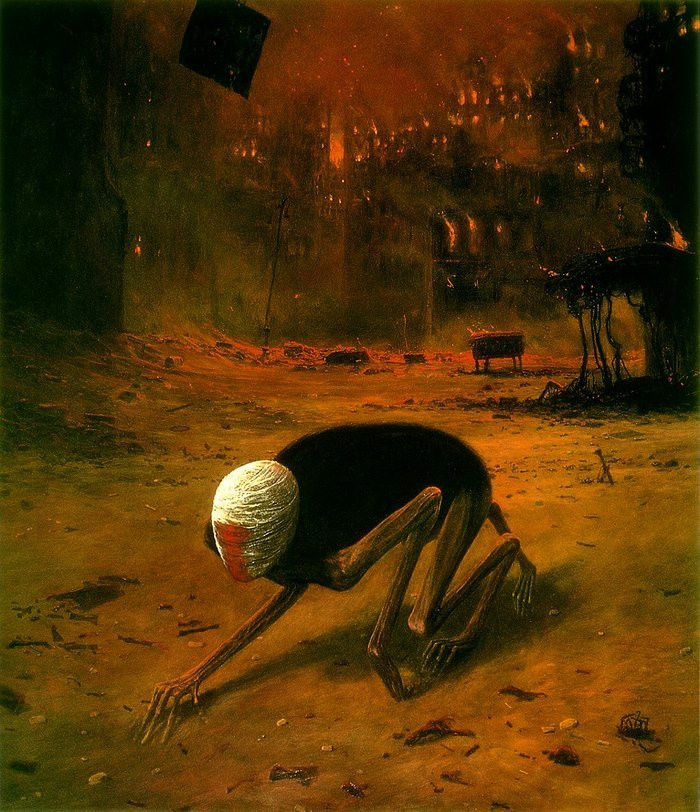 We find ourselves wondering if this art is symbolic of Beksiński finding his son's corpse? He reportedly never came to terms with the death/suicide. 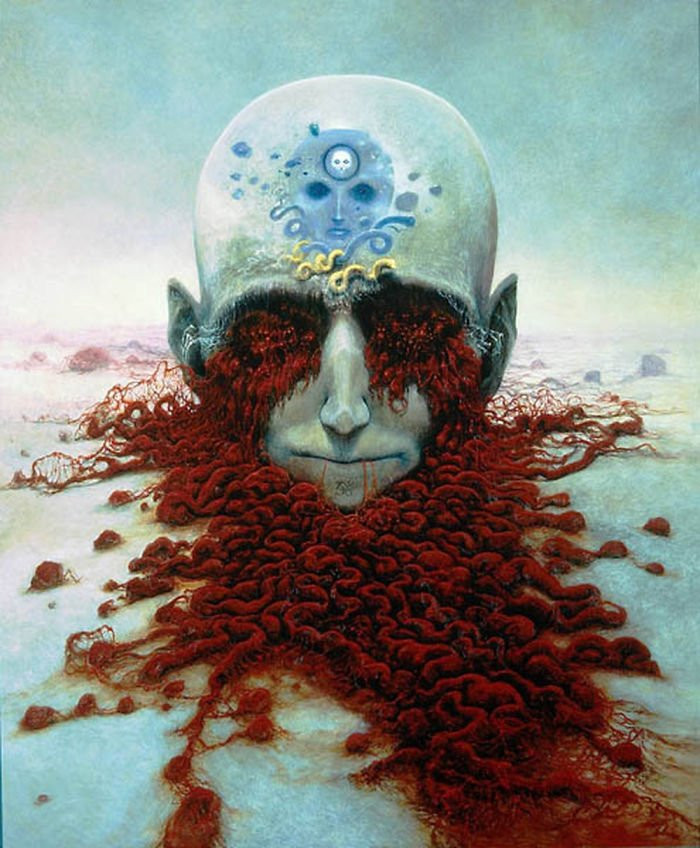 A guide, a voice, watching over? 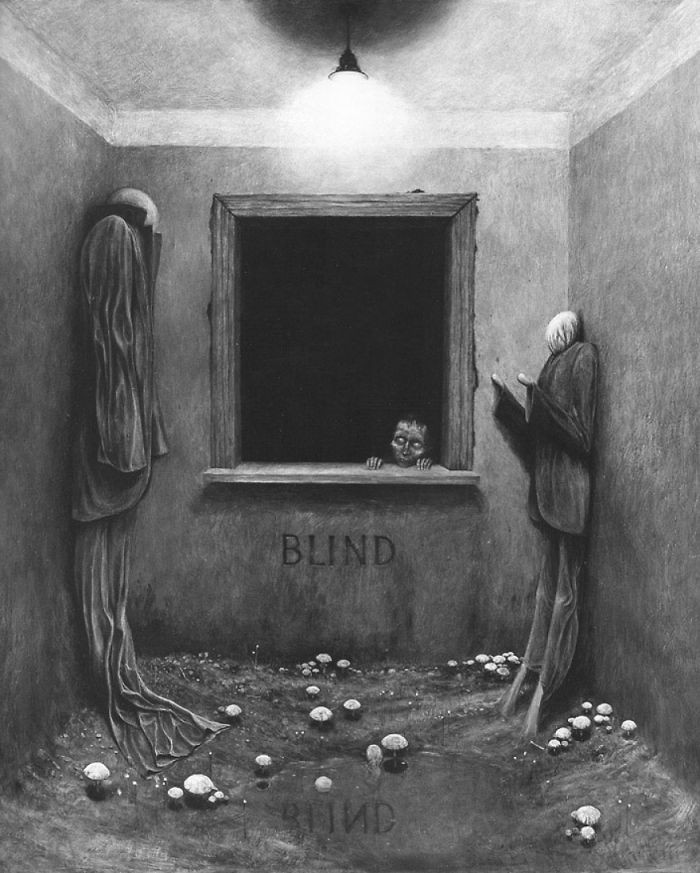 Is this a mental photograph of a nightmare?

Or a fleeting thought of death and repair? 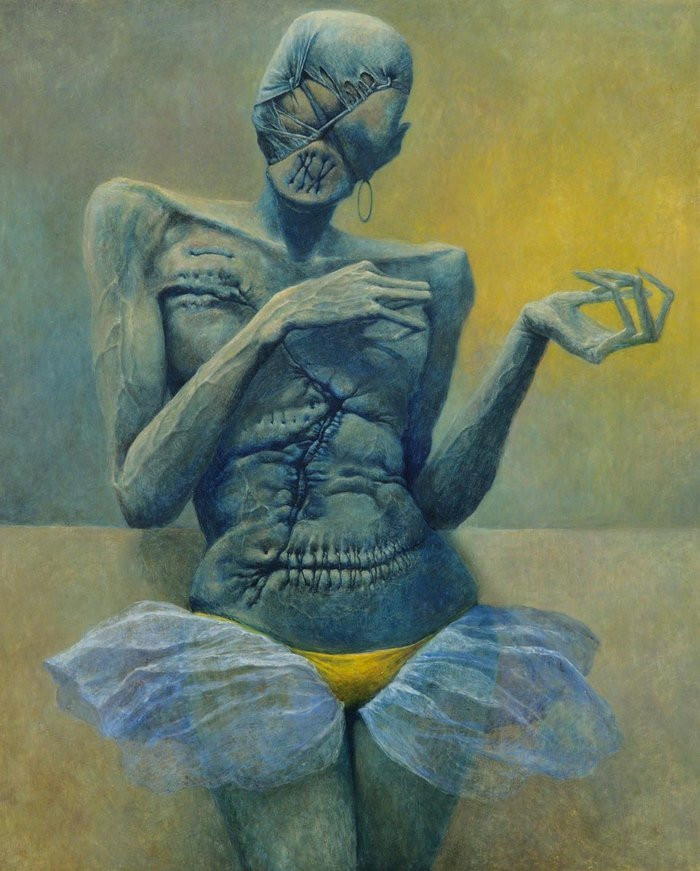 Demons of your nightmares crowd in around you... you'd wake up breathless, gasping for air. 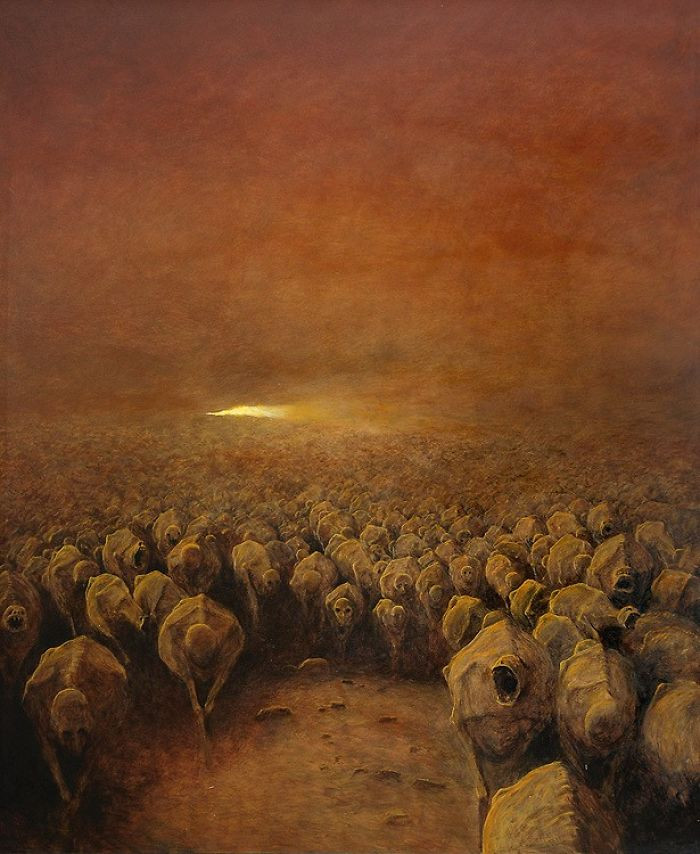 Sometimes the most pain in our lives comes from within. 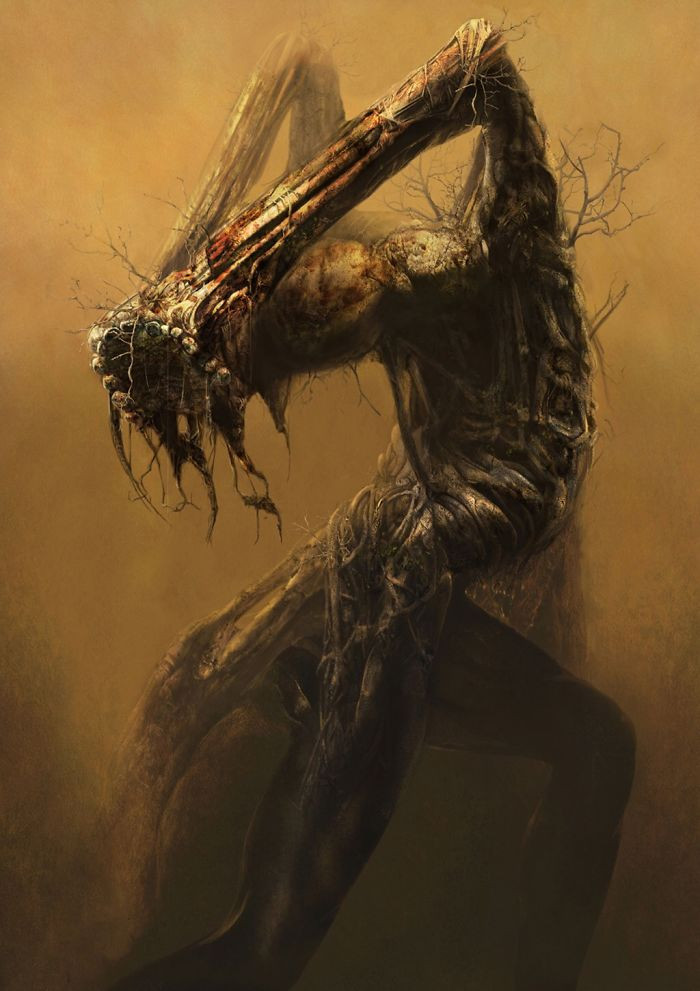 The dead have to go somewhere.

War and death are feeding someone. Perhaps he knew this more than others at the time. 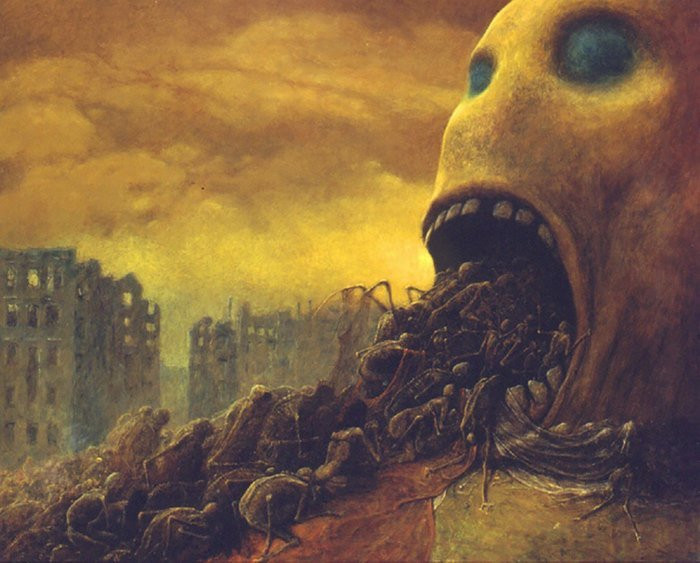 War is death. Nothing but death. 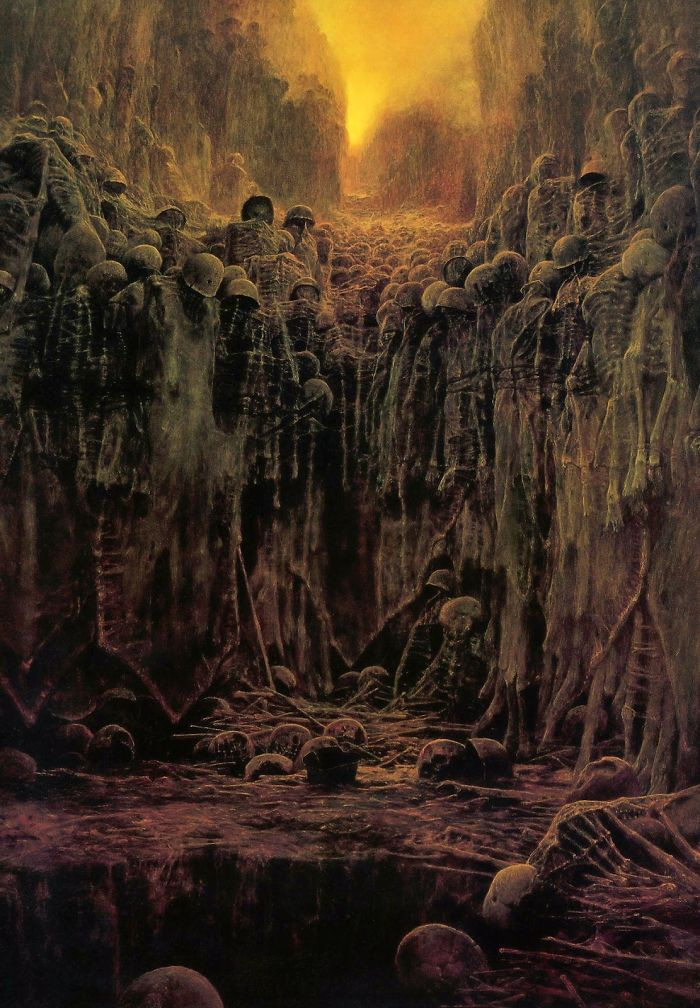 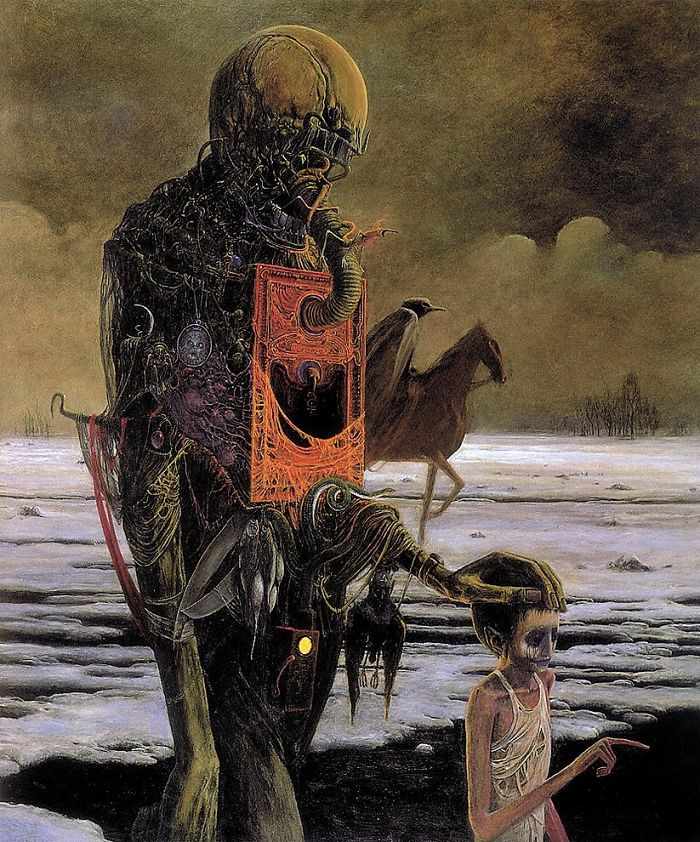 Eventually all of our beautiful buildings will be ancient ruins, a depiction of the war we sought on this globe. 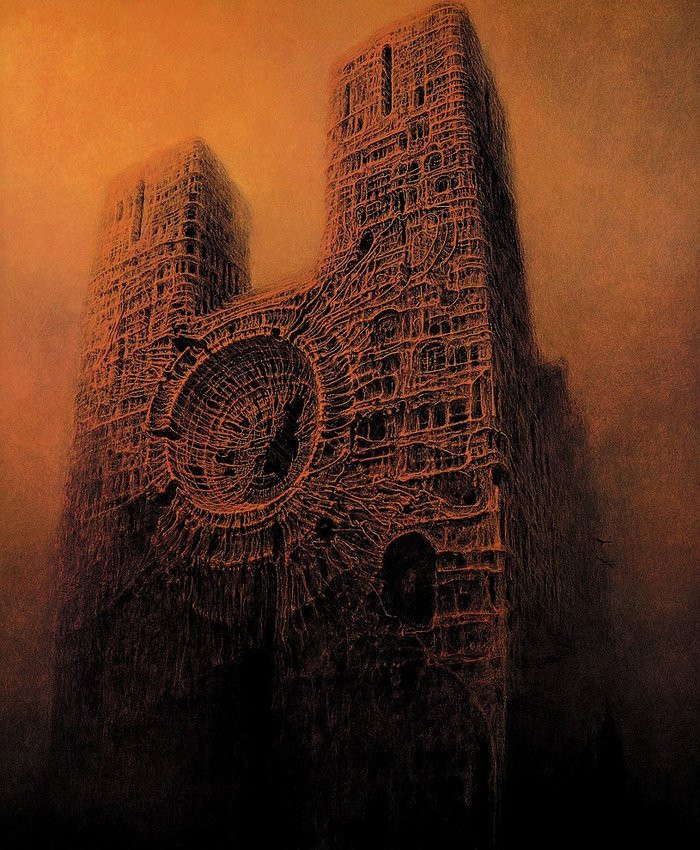 Alone in a field of bones. 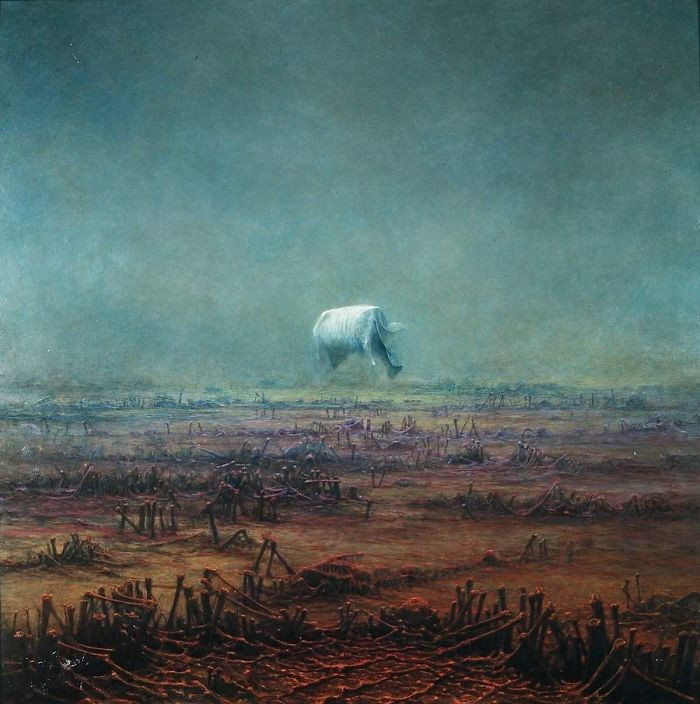 There is almot too much to unpack here.

You could look at this for hours, days, or weeks, and probably still not see every intricate and terrifying detail. 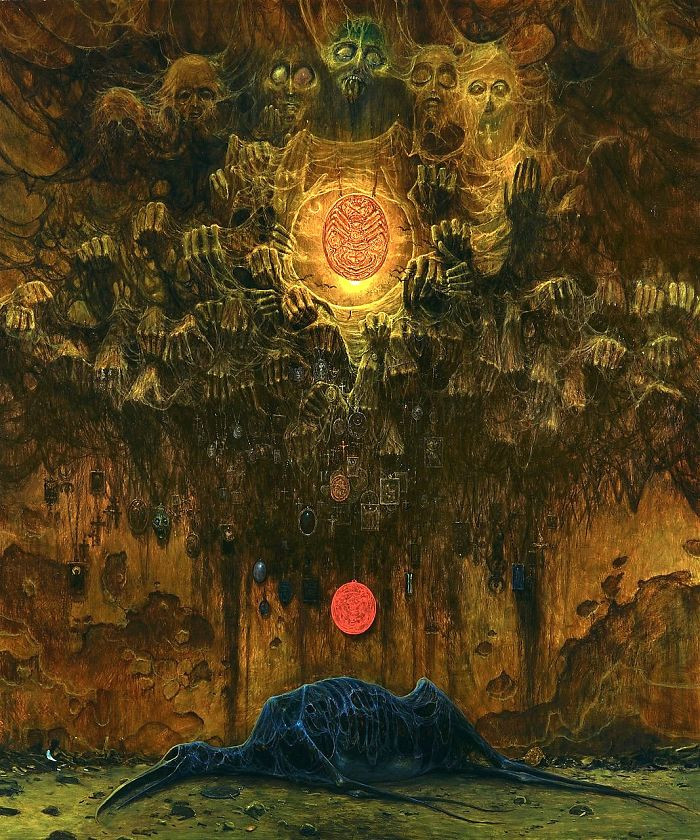 What ran through his mind when he painted this? 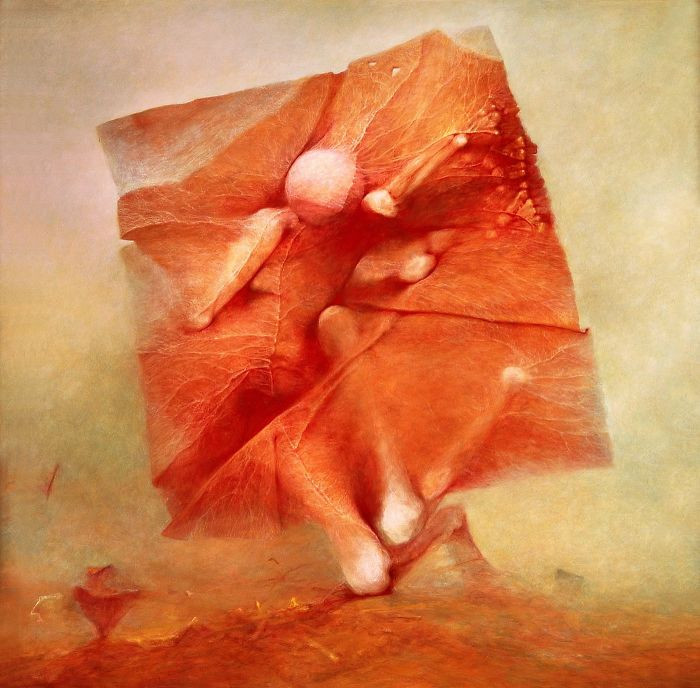 Created creatures of the darkness.

Looming in the night, looking or hunting... 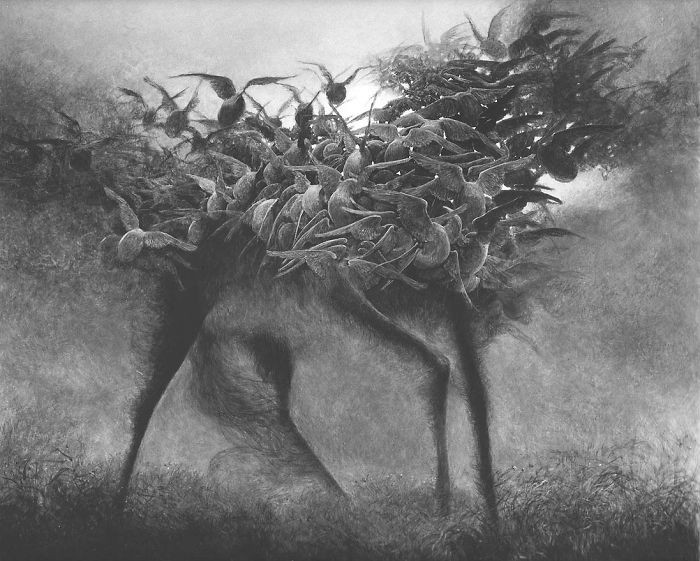