Chances are, today isn't your first day on the Internet. You've been around a bit and you've undoubtedly been exposed to how easy it is for people to be cruel behind the anonymity of a screen to anyone and everyone. In fact, the Internet can be such a cruel place that it's not uncommon for people to need to completely disconnect for various periods of time just to escape the relentless negativity swarming them every chance it gets, whether they're participating or not.

So it stands to reason that whenever we find a wholesome corner of the Internet where people are nice it's the sort of thing that should be celebrated and encouraged. Yet for one random, obnoxious dude on Twitter, this was not the case.

Lewis took to Twitter to lament over how sick and tired he was of seeing women, especially those who don't even know each other, compliment each other on Instagram.

Yes, he really did. 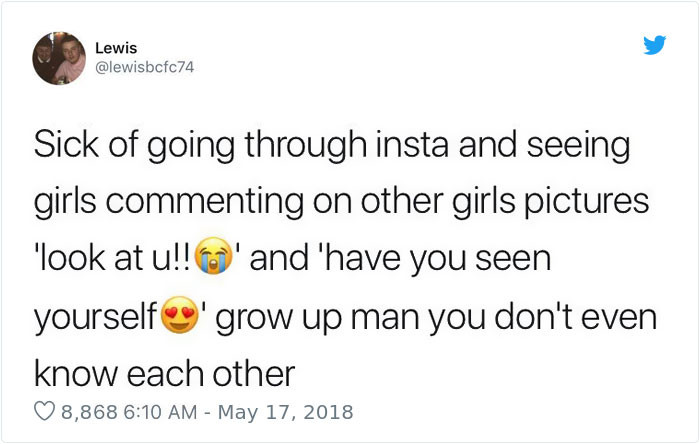 Thankfully, we weren't having it.

Women who disagreed with Lewis's perspective of negativity were not remotely hesitant to make it clear they thought his opinion was wrong.

From there... it only got better.

Because in true Internet fashion, women began to compliment each other in response to Lewis's disdain for such wholesome behavior.

It's not always easy to respond to negativity with this kind of positivity, but it's so refreshing and awesome to see.

The key to success: compliment eyebrows.

Why devote negative energy to the likes of Lewis when we could come together to keep doing what's good and right in this world: being freaking nice to each other!

I can only imagine this was the very last thing Lewis expected to happen.

The truth is, it's a lot easier to lift each other up than it is to tear each other down.

There is more than enough insults being slung, roasts being performed, and mean comments being made throughout the entirety of the Internet.

All the goodness just kept rolling in. Women complimented everything from each other's make-up and skincare to jobs/studies and profile pictures.

Stay amazing, don't let the Lewis types of the Internet keep you down.

Although honestly, we wonder if Lewis learned a lesson or found himself boiling with confused rage.

Ultimately, though, we don't care if Lewis was upset. Because we are living for these relentless compliments.

And the people who stumbled on Lewis's tomfoolery proved it, flawlessly.

Hopefully, this chain of kindness and compliments is just the sort of inspiration you need today to go out and be good in the world.

There could never be enough positivity, we could always use more.

Kindness radiates outward from within.

Maybe this can be your reminder today to be nice.

Because sometimes, people just need to hear a compliment.

Have a good day, beautiful people!