A reporter's job is definitely not an easy one. Going to places and talking to people they wouldn't normally, or sometimes even putting themselves in harm's way to get a good story.

And all the while envying those people who work from home and have it easy. They are nice and warm while the reporters are freezing or soaking wet, waiting outside for a press release or a government official statement.

Well, now they have a chance to see for themselves what's it like working from home... And we have to admit that they are managing it pretty well while having some fun while doing it…

1.Kim Powell, a reporter for CBS in Arizona, had her kitty stroll right in front of her during her broadcast from home:

Been working from home the last few days. Turns out one of my coworkers doesn’t understand personal space! #QuarantineCats up to no good! #azfamily pic.twitter.com/tLmUODEINE

"So it has been a week since...this is my cat...those are the perks from working from home!" 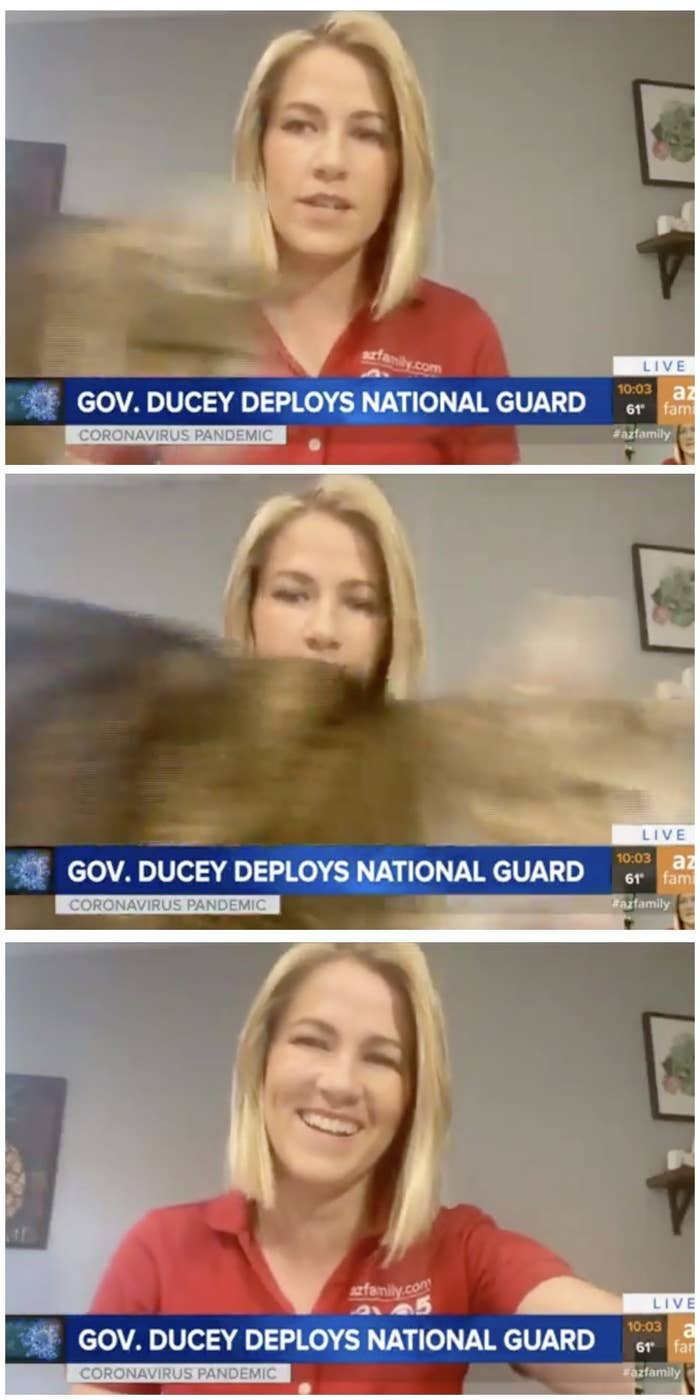 2. Charley Belcher of Good Day Tampa Bay had to calm his jumpy dog throughout his segment:

Reporting from home means you still have to take care of your “kids.” Bowser got a little nervous after my wife had to go into work today...and he jumped into my lap right before a live shot! Gotta love live TV! #AllInThisTogether #WorkFromHome pic.twitter.com/cLSVw4Owq6

3. Hobie Artigue — the sports guy from Minnesota's Fox news station — had his big dog Boris crawl into his lap moments prior to his live piece:

When your gargantuan dog crawls in your lap right before a @FOX9 live shot, sometimes you just gotta go with it...

My cat Zooey doesn’t understand personal space & meows every two seconds, so @brianemfinger thought of a way to keep her preoccupied during our live shot last night. Enjoy😂 pic.twitter.com/TKRRYB0D1U

the moment when @chrisWBZ's dog Dougie crashed his at-home liveshot today during @WBZ This Morning! pic.twitter.com/3upiuLuzxy

6. Joy Wang from KOB 4 Eyewitness News had no difficulties with her new "colleague" who snoozed all through the whole thing:

First LIVESHOT on a cell phone. From home. New coworker was unimpressed. Slept through the whole thing. #StayHome4NM pic.twitter.com/oRG6INtVhj

Congrats to @peterbakernyt for creating a worthy successor to BBC Dad, this time with his pet dog. pic.twitter.com/4lJrH9eGYK

8. Jason Adams, ABC Tampa Bay's meteorologist, had his kitty Ninja run behind him while he was talking about the weather:

That sly girl snuck into the shot without me even noticing... 😼 https://t.co/dzXUjO0biQ 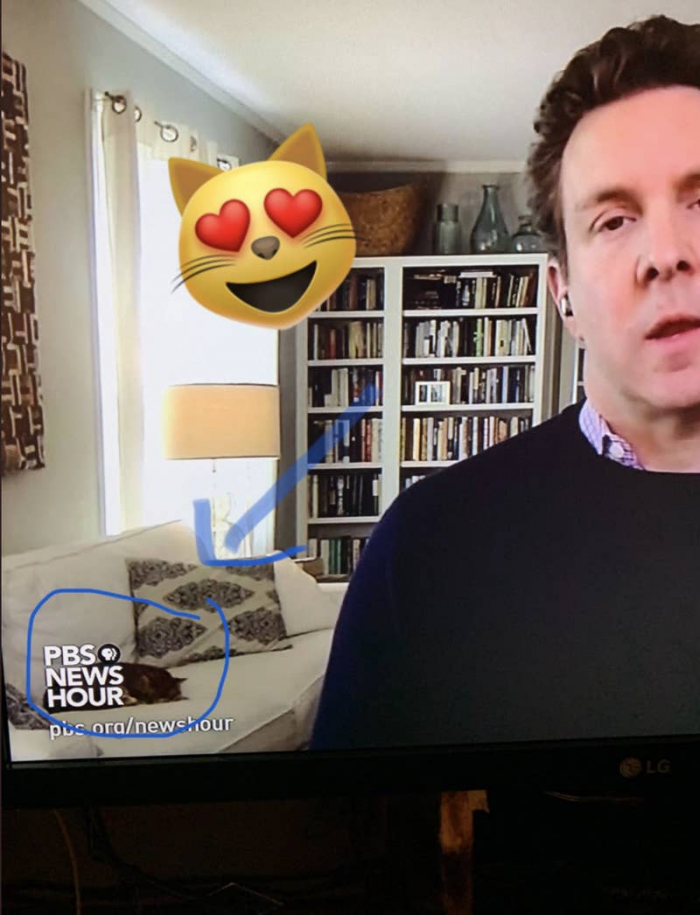 10. CBS Denver's Makenzie O'Keefe put up a sign alerting his family not to enter the room while she was live on-air:

At @CBSDenver were doing our part as reporters to work remotely, or in my case tonight, from my home! Had to play it safe during the live shot 😂 #COVID19Colorado #StayHome pic.twitter.com/wBPFou8WnG

11. NBC News' Kate Snow did her own hair and makeup:

Getting ready for my first at-home liveshot @todayshow. (It takes a lot. I miss the pro help). My story this morn is about retirees, students and medical professionals who haven’t been in a hospital for a while now jumping in to help with coronavirus. #HeedingTheCall pic.twitter.com/6DdNAzyHVV

12. Heather Crawford from the First Coast News used her kid as a stand-in while she set up the shot:

13. MacGyver would be envy of how CBS News' Jericka Duncan created a tripod for her segment:

14. News 5 Cleveland's Jade Jarvis was very inventive when it comes to lighting:

When you have to work from home, the only place suitable for a LIVE shot is the game room! pic.twitter.com/vWZDzEGPE2

16. WMAZ News' Kayla Solomon did a healthy food piece live from her own kitchen:

17. Ira Glass of This American Life taped his show in his new studio:

Recording this week’s show (well, I closed the closet doors while I read my narration). @ThisAmerLife pic.twitter.com/SrTO0hsgyz

18. WCNC Charlotte's Vanessa Ruffes used her deck so she could have the skyline in the background:

19. NBC Los Angeles meteorologist Shanna Mendiola made a Weather Center in her home.

This is WILD! When your lady’s the first meteorologist ever with a freakin’ WEATHER CENTER inside the apartment! #SaferAtHome #ShelterInPlace #CoronavirusLockdown #COVID19 @ShannaNBCLA @nbcla pic.twitter.com/1VVCabg3xC