Some things in life we cannot change, no matter how much we try. The Sun is going to die eventually, we have to pay taxes, and we are all going to turn into our parents.

It does not matter what we do and how much we fight it; it is going to happen, so we might as well accept that and go on with our lives. So, just relax and enjoy the ride.

A recently shared post inspired people to share the moments they’ve realized that they are turning into their parents. They are hilarious and, unfortunately, so relatable. So, so, relatable.. 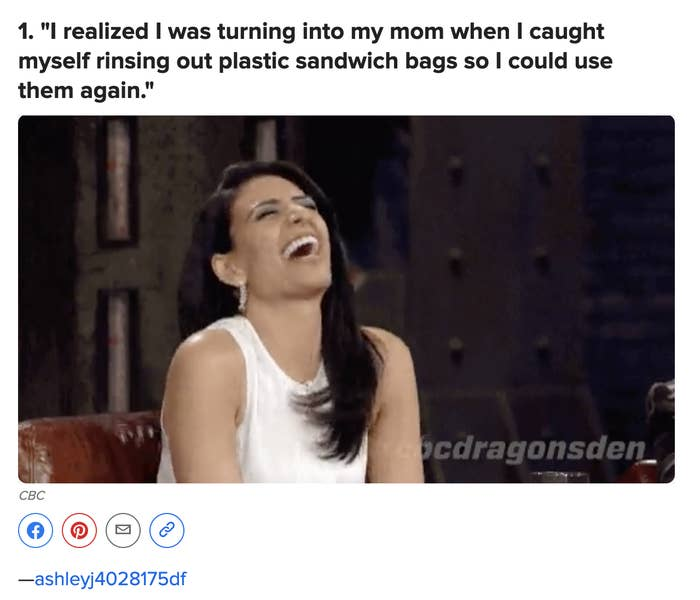 "I used to make fun of my mom for buying the same clothes in every color — and now I have five of the same tank top in four different colors."

"I realized I'd become my mother when I started obsessively straightening piles of books on tables at Barnes & Noble."

"When I started bragging about how I wake up early without needing an alarm clock."

"When I bought a set of bathroom towels for decor, and use completely different towels to actually dry my body."

"I realized I was becoming my mom when I began collecting pens from anywhere that offers a pen. And if it writes well, I come back for more! The bottom of my purse is full of them!"

"When I told my young cousin to stop talking to me like one of her 'little friends.'"

"When I was a kid, my dad always backed into parking spaces, and I found it annoying. Then, when I was an adult, I was once in a tight spot at a restaurant, so instead of pulling an Austin Powers, I just backed right in...

Ever since then, I always back into parking spaces — those few extra seconds are worth it when you leave!"

"I knew I'd become my mother when I started hoarding plastic bags under my sink."

"When I asked my 6-year-old, 'If everyone jumped off a bridge, would you?'"

"When I started bragging about what a good deal something was."

"When I was younger, I once held an intervention for my mom's plant addiction. Well, the other day, I went to the store for one thing...and came home with wine, plants, and no memory of what I actually went there for!"

"When I was at a concert and I noticed some drunk people in their early twenties, and I asked them if they were even old enough to drink."

"The time I yelled, 'Where are my glasses?!' when I was actually wearing them."

"I realized I turned into my mother when I told my fiancé he was folding the laundry wrong."

"The first time I bought linen shorts with an elastic waistband, which I've been wearing all the time during quarantine."

Whenever my mom would drop something or stub her toe, she would say, 'God bless America.' Now, for some reason, I do it too."

"I realized I was turning into my dad when I was cooking with some friends, picked up a pot of noodles to drain, and said, 'Coming through — HOT STUFF!'"

"When I started stealing little jam packets for no reason."

"When my boyfriend got home from work 30 minutes before dinner and grabbed a snack, and I warned him he was going to spoil his appetite."

"When I started getting angry when other people baked in my kitchen."

"I used to be great at telling stories and jokes and would tease my mom for being bad at both. Now I occasionally find myself forgetting the middle part of a joke or rambling during stories. The horror!"

"I used to make fun of my mom for watching Dancing With the Stars and The Voice, and here I am, fully invested in finding out who the Kitty is on The Masked Singer."

"I haven't actually turned into my mother — I've turned into my GRANDMOTHER. I always have snacks on hand, which I keep in plastic bags that I reuse until there are actual holes in them.

It wasn't the way I expected to keep her legacy alive, but it does make me smile and remember her, plastic bags and all."