Job searching can range from boring to a downright soul crushing endeavor. Searching through the endless stream of job listings that have just the right amount of keywords to trick you in to looking at positions that aren't really as advertised, wanting 5+ years experience for an entry level position, offering "remote" but not really.

Writing countless cover letters, manually entering your resume after uploading it, and getting few responses. Going through interviews faced with the same questions, taking the same tedious tests to gauge your "worker profile" and prove your listed skills.

Rather, rinse, repeat. It can be a long, repetitive and boring experience. So, if presented with an opportunity to have some fun with it, why not?

This is what Twitter user Firr decided to do. And thankfully, he thought to share his experience with the rest of us, live-tweeting the entire ordeal.

Recently, his recruiter (who either didn't critically read his resume, or the job listing despite the company's name not being listed) scheduled an interview with a company that he previously worked for, and was subsequently fired from.

Firr figured that since he was financially stable and had some spare time, he figured he might as well turn the monotony of a job hunt on its head and have some fun with it.

Complete with a disguise of a fake mustache, Firr went through with the hour long interview, live-tweeting each hilarious encounter. 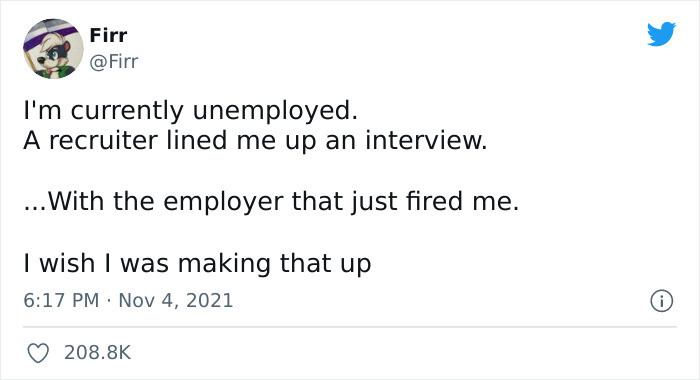 A sense of humor can be an incredible asset

Good thing Firr was able to re-frame this in such a humorous way. 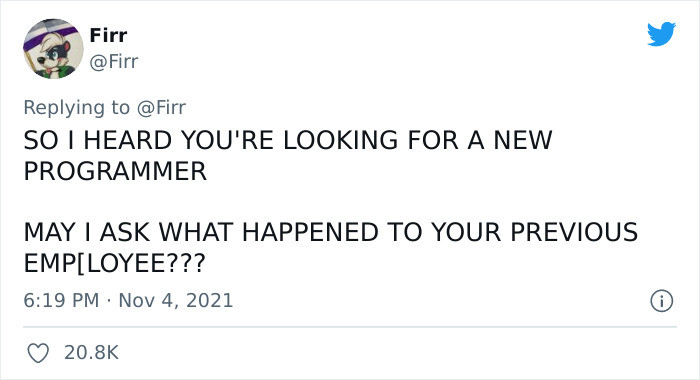 Would you believe it without any tangible proof?

Maybe the fact that this is so unbelievable is what helped drive Firr to share in the first place. 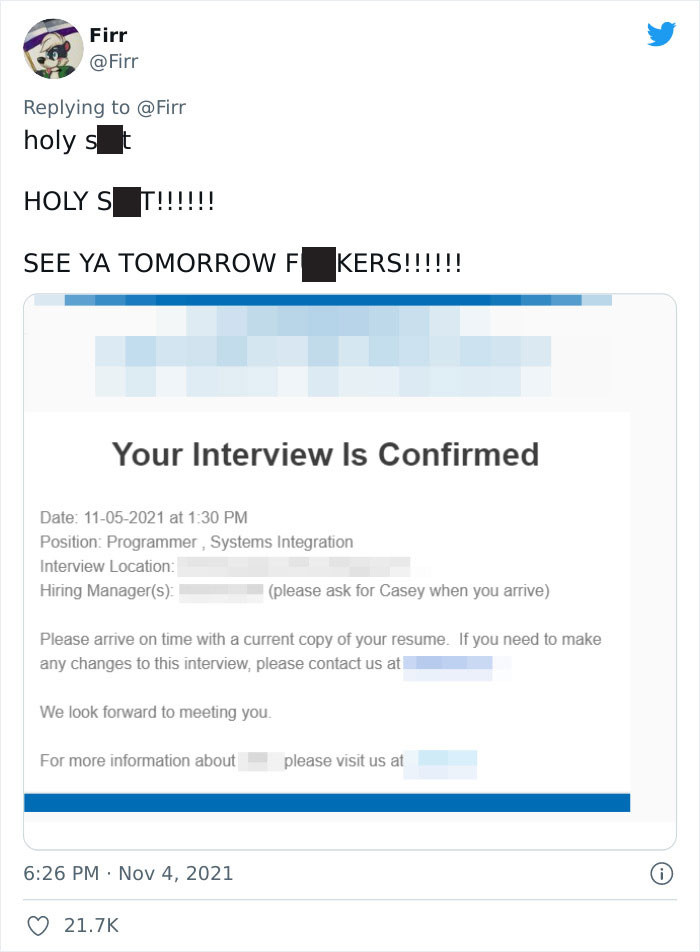 Who would pass up an opportunity to harmlessly "get back" at an employer for firing them?

Being in a stable position financially can definitely help inspire some more creative responses to asinine experiences. 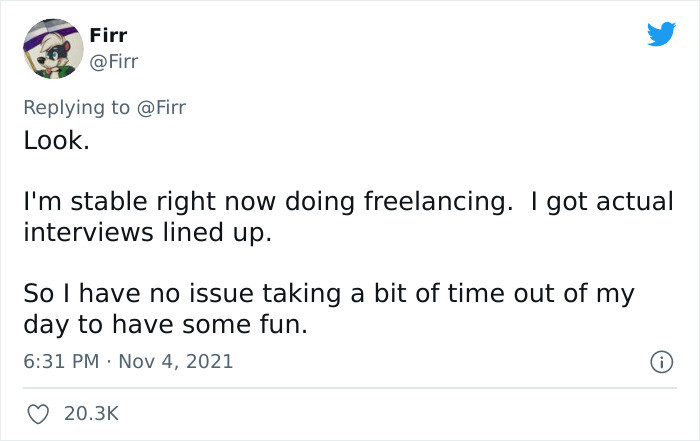 Dress For The Job You Want 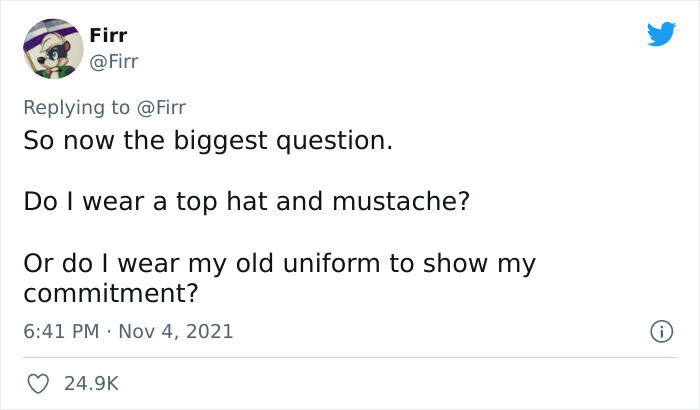 Having his old uniform is great, but it doesn't hurt to tack on a fake mustache to go under cover.

When will they figure him out? 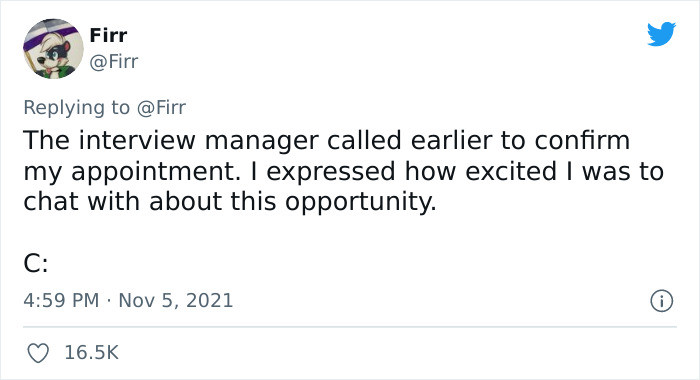 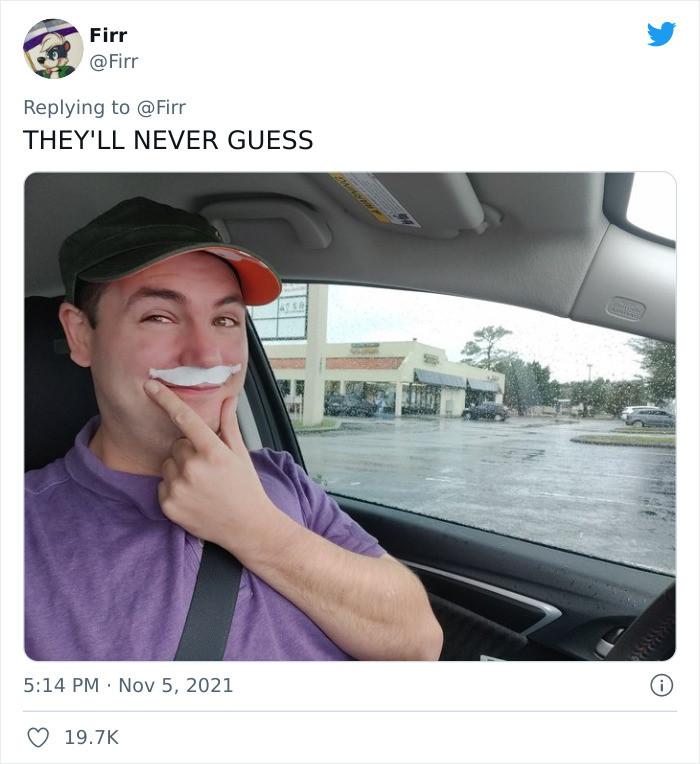 Could this possibly not be the first time they've encountered an interviewee with a fake mustache?

This helps narrow down the timeline

Firr mentioned being recently fired by this employer. So recent in fact, they haven't gotten around to disabling his WiFi access.

Pandemic may actually be helpful

A lot of places have implemented face masks for indoors, and it looks like this place is one of them. Could this help his disguise? Mustache just in case, of course. 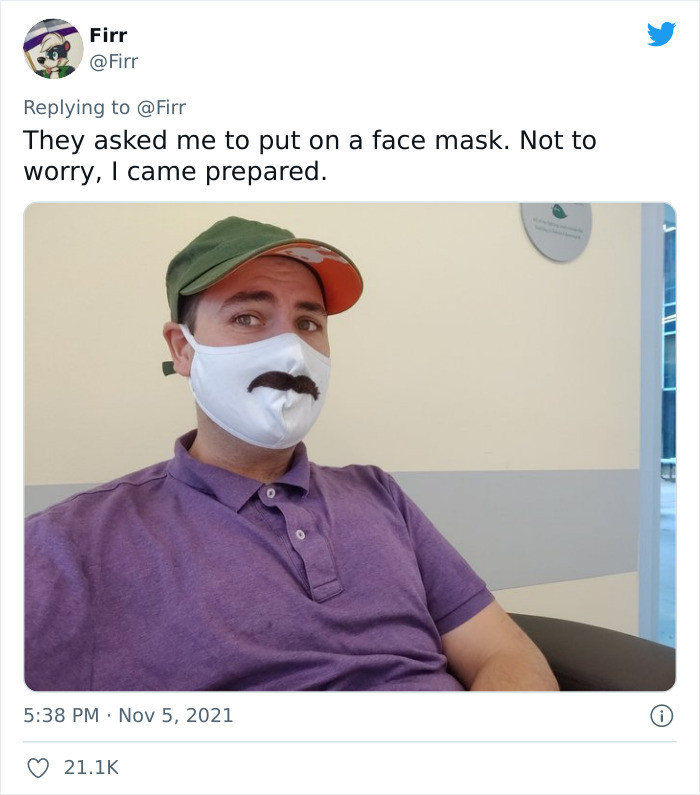 Firr and the Hiring Manager haven't met before! The ruse can continue.

After mentioning they haven't eaten, the Hiring Manager took it upon themselves to bring Firr a snack. 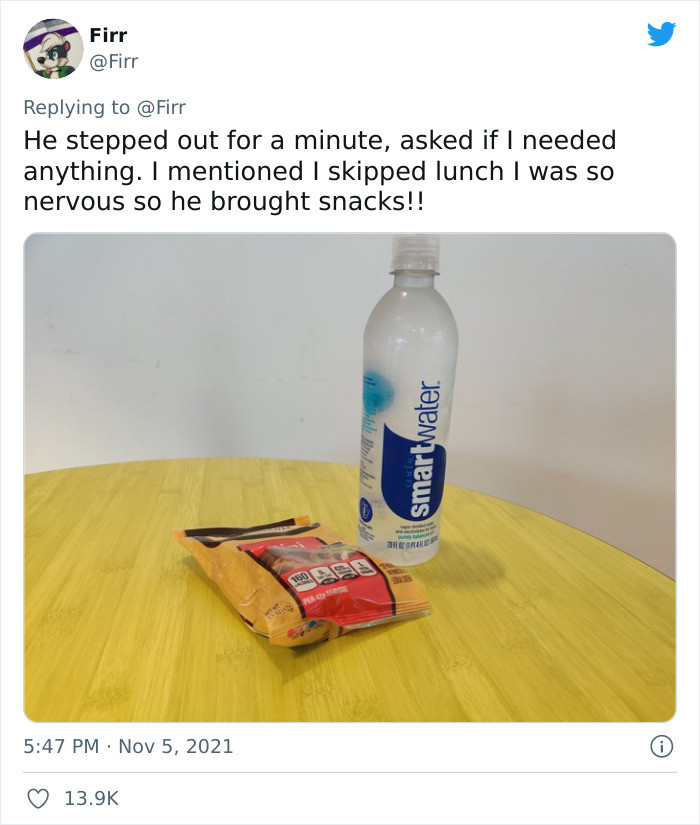 On the plus side, he wont be outed any time soon!

Could this be the set up for his downfall?

Firr seems hopeful to be discovered! 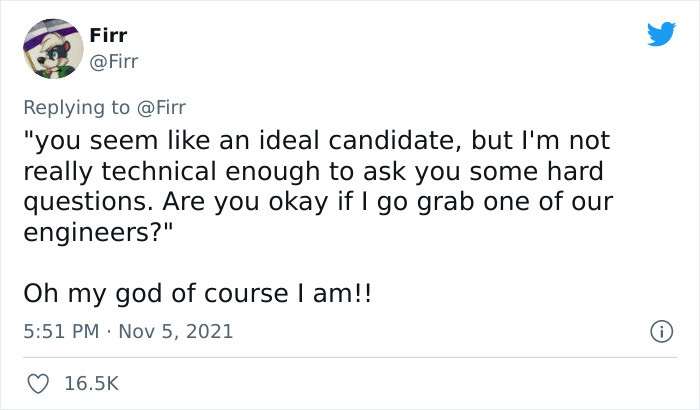 But at least there's snacks! 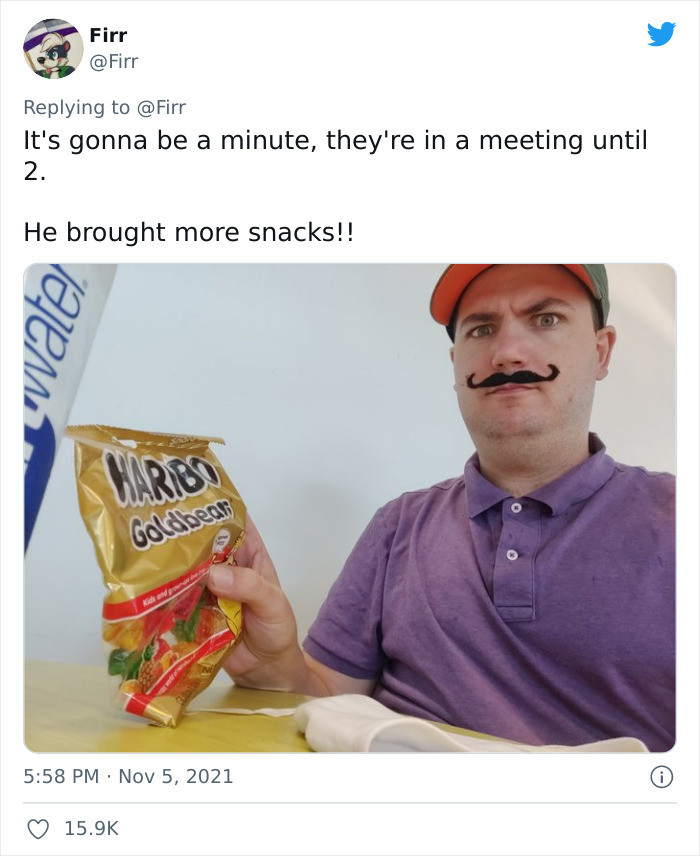 Who wouldn't mind a handful of snacks during an interview? That would make the whole process infinitely more enjoyable.

A chance to be recognized finally comes

An indirect co-worker is coming to meet Firr. Will his disguise be enough to fool them? 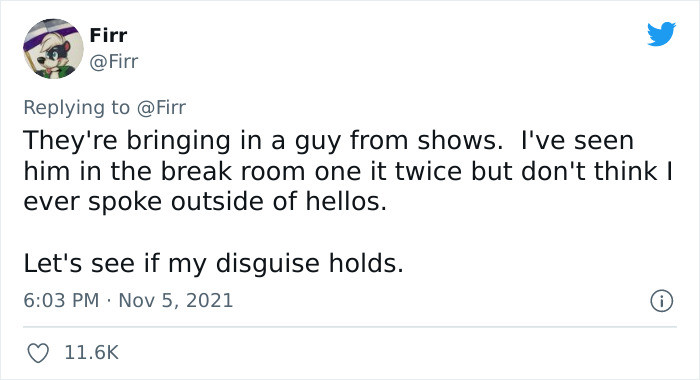 The old co-worker sort of recognizes Firr, but not enough to end this activity. 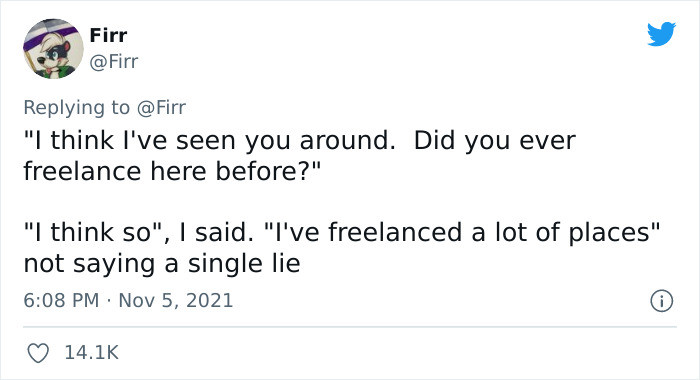 While waiting for the next person to meet with, Firr takes this opportunity to freshen up his disguise. 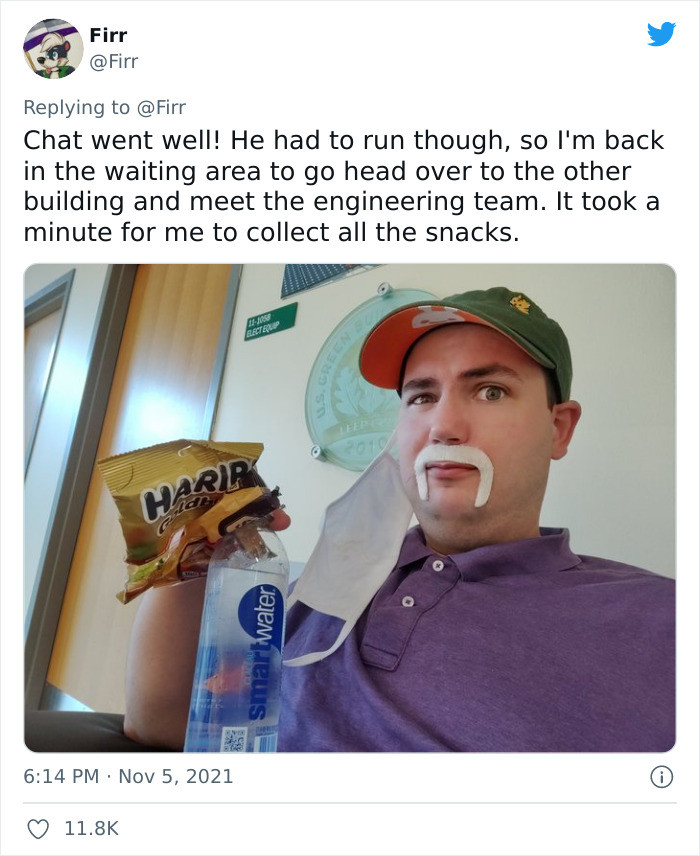 Has the time come?

Will he meet with one of his previous coworkers who we worked with directly?

More waiting, but they're coming to him now!

Firr poses gleefully with a package of beef jerky. 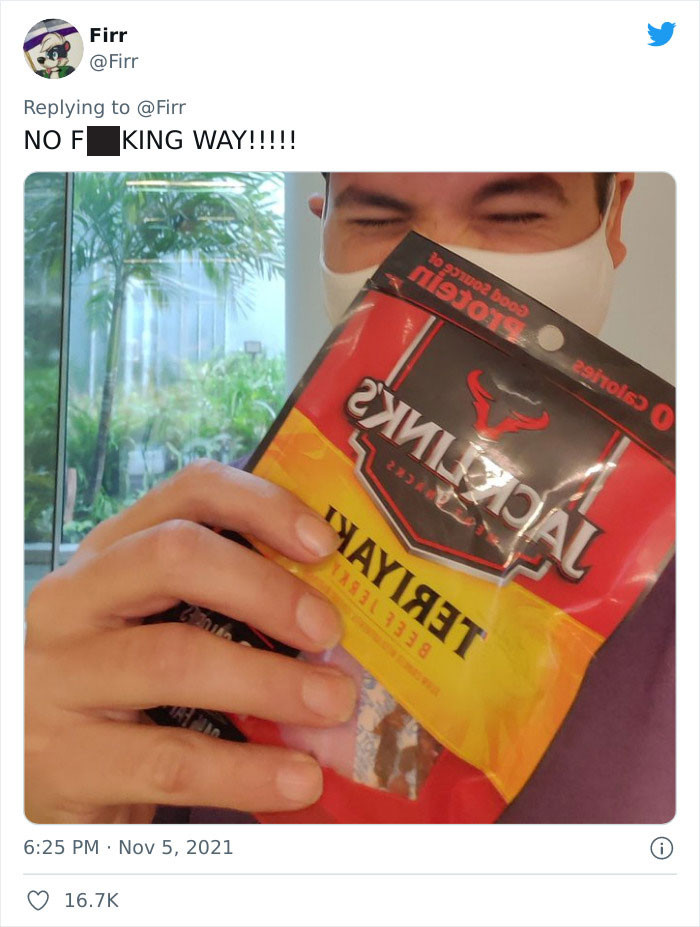 Unsure of what to do? Grab a snack to buy yourself time.

At least, that's what appears to be the Hiring Managers thought process.

Ready for the defense

Has word gotten back to the engineering team that he's back in the building?

The Moment of Truth

Someone from his old team has finally showed up! 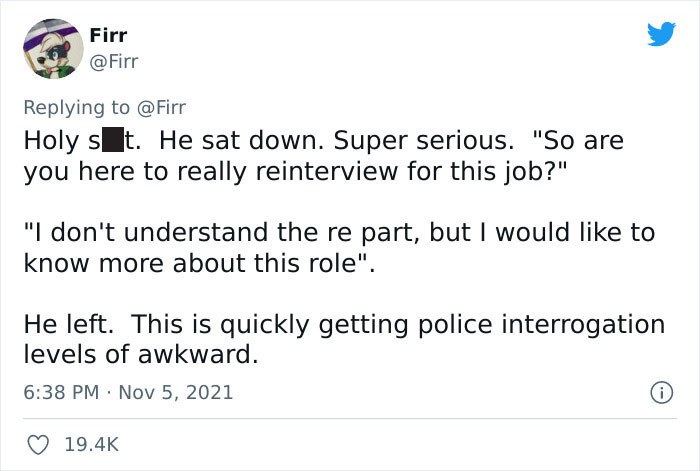 Could this also be the end of snacks?

I wonder how Hiring Manager will feel about this once they learn about Firr being a previous employee.

I guess it IS the end

He's been outed! And Hiring Manager wasn't too happy about it, either. 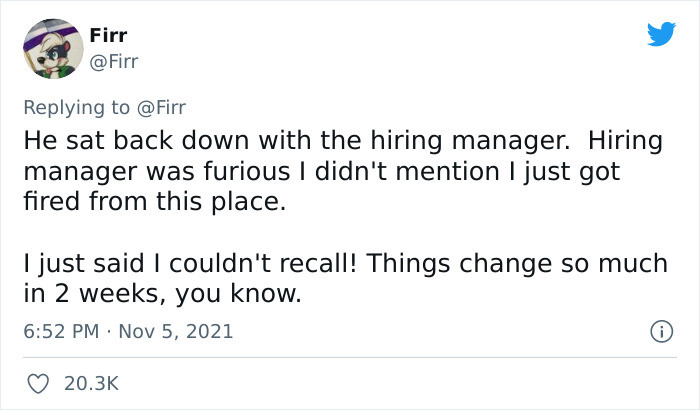 A sweet treat could help take the sour taste from this experience out of the Hiring Managers mouth.

Firr shares that he's been there for over an hour now. What a way to spend your time.

Now that he's finally been figured out, he gets his own personal escort out of the building.

Holding on as long as he can

He continues to play the part, and purposefully makes wrong turns to delay his exit.

Looking back on his experience, Firr clearly points out who came out on top. 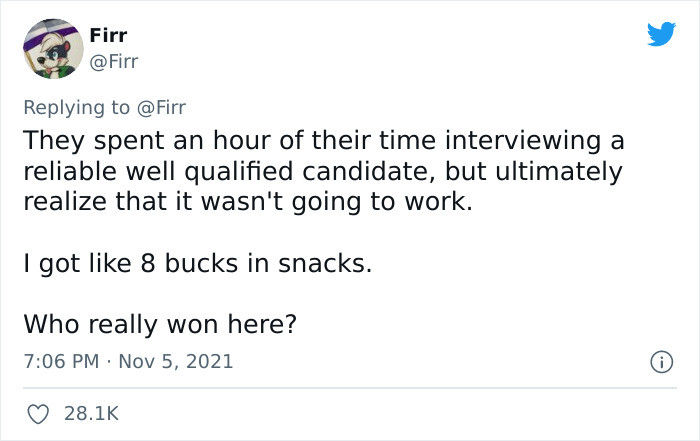 Irresistible opportunity to pass up

In a stroke of comedic genius, Firr doesn't let the opportunity for a dramatic reveal slip away. His old boss still remained unimpressed. 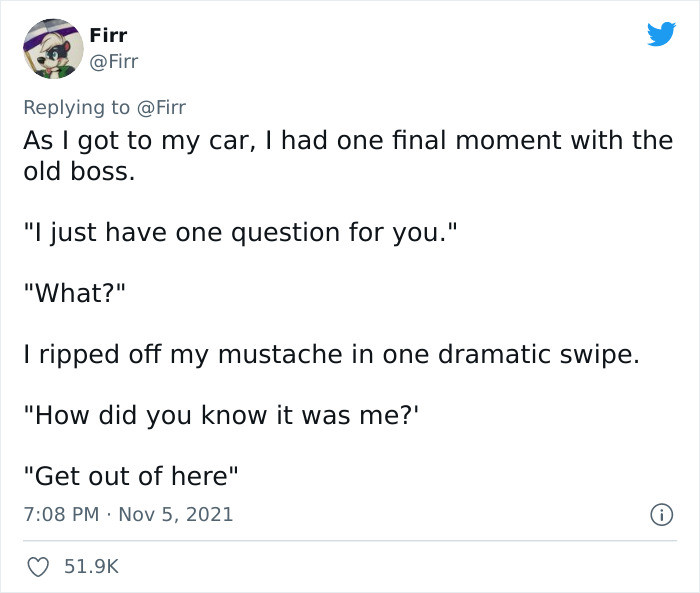 A follower shared their rendition of how the last hilarious interaction went down. 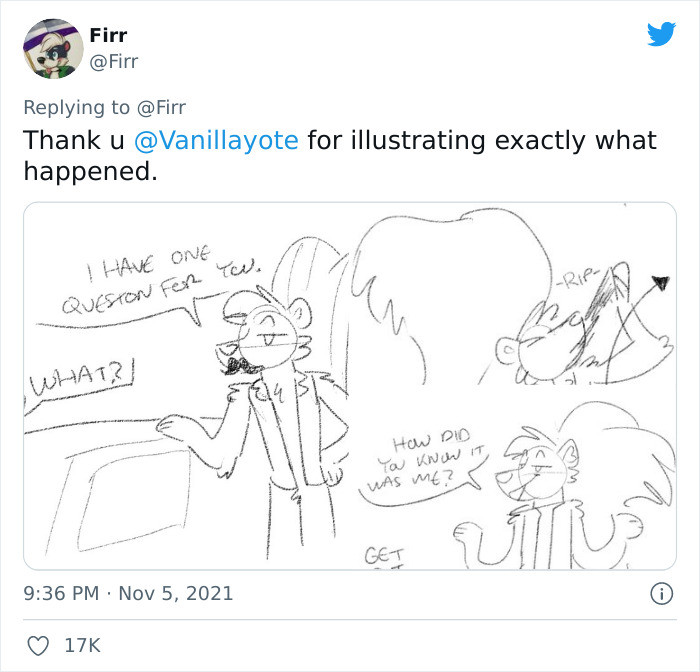 This adventure inspiring others to share their related stories.

User PatCanAct shares that they experienced an almost identical situation, however they chose to point out the error to the recruiter. 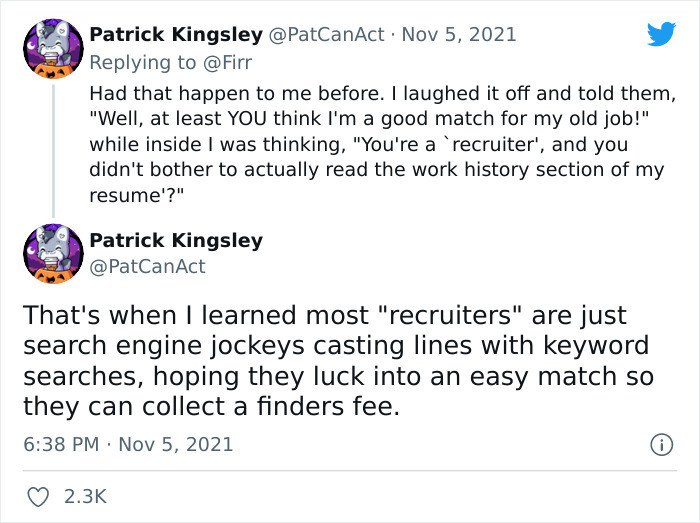 Maybe recruiters should make sure they're looking at a current resume before making those offers.

Not the first one to re-interview

Another user shares that they did the same thing back in 2001, but that was 5 years before the creation of Twitter. 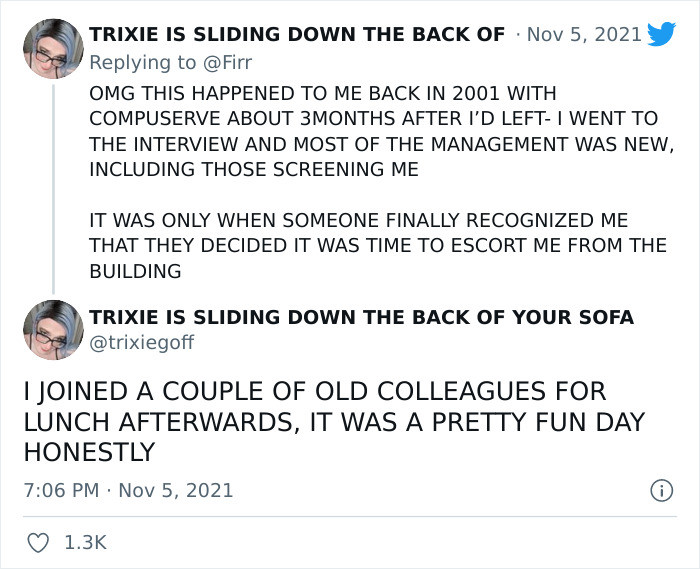 User WisePancakeWuff decided to take the high road, though.

Didn't quite put the pieces together

User @FoxyAreku shared an experience of being fired and rehired within 24 hours! 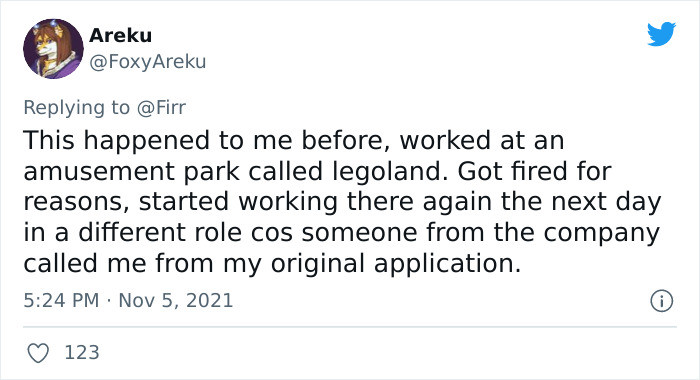 Recruiters are starting to develop a bad rap

Between user @poppy_haze's experience and some of the above examples, it doesn't seem like recruiters are very good at what they're supposed to do.

Facebook user Will Lee had waited months to get in to a specific job that he thought only hired through one recruiter. He got the job without their help and made sure they knew about it. 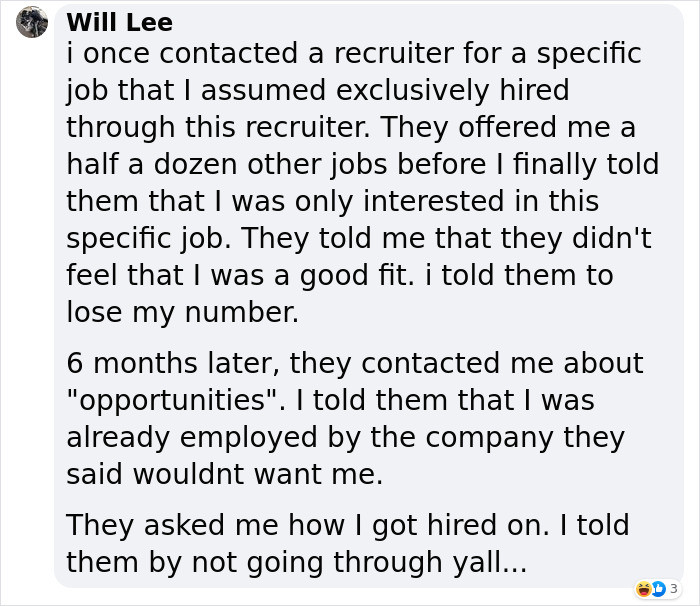 Reading comprehension seems like a required skill for recruiting

Facebook user Hunter Kintsukuroi shares yet other story about a recruiter missing the obvious.

As we all know, every situation is different.

We don't have the full story about what happened between Firr and his former company. But, the experts at the world's leading job site, Indeed.com, say that leaving your job on good terms is crucial if you want your career to succeed.

“When you leave a company, doing so respectfully shows your employer you care about the company and its reputation. Your professionalism during the transition might earn you a recommendation from your supervisor,” they write.

“Maintaining positive relationships with peers and supervisors is also important as you might work with them again or see them at professional industry events like conferences or professional development events.”

According to the people who work at Indeed, there are 9 steps that you should consider when leaving a job on Good Terms:

1. Give notice: Once you know you'll be leaving your job, give notice to your supervisor in the form of an official resignation letter.

2. Be respectful: Tell your supervisor or boss you'll be leaving your job before you tell anyone else at the company.

3. Help with the transition: If your supervisor requests your help, share the news of your departure with clear guidelines for how your team will manage your work until management chooses a replacement.

4. Continue to work hard: Maintain a productive workflow after giving notice of your departure. Excellent performance demonstrates your professionalism.

5. Connect with your team: Hold a meeting with your team or colleagues in other departments with whom you work most frequently. Ask them what they need from you to ease the transition from you to your replacement.

6. Finish all your projects: Make sure you complete all your ongoing projects and assignments before your last day of work. I

7. Offer training: If your company hires a replacement before your last day, offer to train that person.

9. Maintain relationships: Keep in touch with your colleagues. Positive relationships help keep you on good terms with the company as a whole.

So while it is important to take care of yourself, try to keep in mind that some empathy and compassion can be beneficial in the long run.

And of course, every situation is different, such is life. Sometimes the best course of action is to slap on a fake mustache (or 10) and have fun.