While no two walks of life are precisely the same, we all do have something in common: we all have secrets. Some secrets may be astronomical, ground-breaking, or unbelievable even... while other secrets have more of a deeply personal impact.

Never the less, everyone does have their secrets and far too many of us learned somewhere along the way that we have to keep them secret. It's true that sometimes you can divulge some details to some people but in general, we all have things we keep closely to ourselves.

That is, of course, until we are given an opportunity to speak freely under the guise of anonymity. As a social media platform, Reddit does award a decent sense of anonymity to the majority of it's users.

While you can divulge details that give your identity away if you're not careful (and some people create throw-away accounts precisely for this reason,) in general, you can just spill your guts on r/AskReddit posts like this one today. Reddit user _itsRose asked: "What is the weird/hidden thing about yourself that always makes you think "if only people knew this about me.....?"

Thousands of Redditors came to discuss it, because if there's anything we love... it's juicy secrets.

"What is the weird/hidden thing about yourself that always makes you think "if only people knew this about me.....?""

"I have Ectodermal Dysplasia."

"It has a relatively wide range of symptoms for those who have it. It can affect your hair, skin, nails, teeth, and sweat glands among other things. In advanced cases of it, the person is born with an inability to sweat and life span can very dramatically.

Fortunately, i have a VERY mild stage of it, and it is non-progressive. I have very thin hair, and nails that don't grow quite right. I got my baby teeth as normally as any kid would, but as i lost them, my adult teeth never came in. I got pretty lucky! Its a very rare condition and even more rare to have it so mildly."

"Robbery. Drug related. Had some bad habits, too put it lightly lol"

According to NY Times: "The most recent Gallup poll on the subject found that 15 percent of the American population has engaged in some form of ''social nudism."

Shout out to EVERYONE over-coming addiction.

Quiet and reserved but intensely emotional people are incredible. 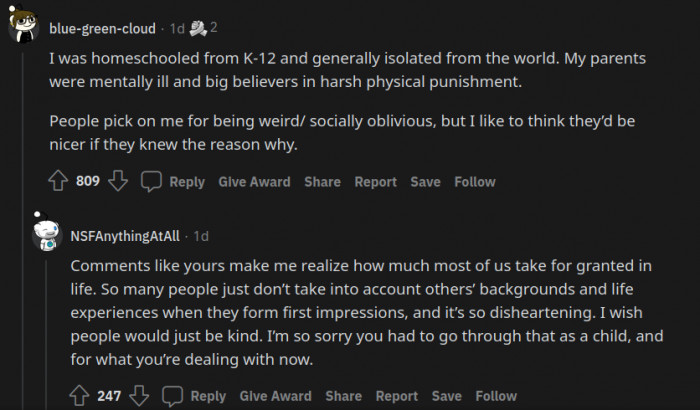 Being a daydreamer is SO under-appreciated. 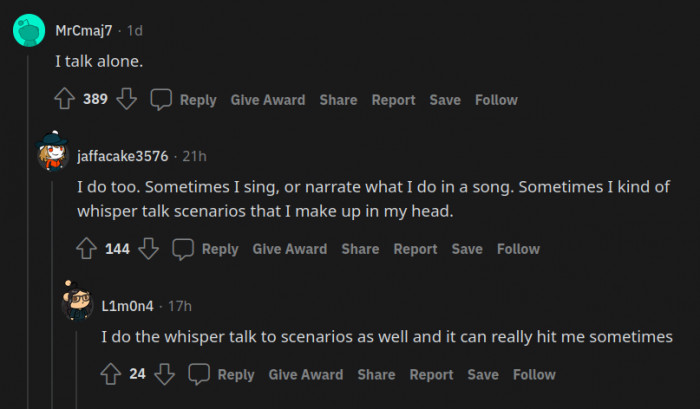 "Treatment has changed my life for the better. Seriously for anyone with a brain that feels like scrambled eggs from time to time it's worth getting checked out. Being back in control of things has greatly reduced my anxiety." 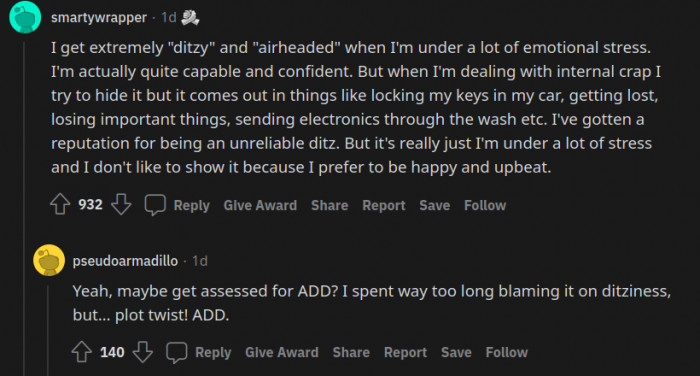 "Train when I can, which is admittedly pretty rare now just due to life stuff."

"And the last fight I was in a ring for was about 8/9 years ago. Outside of a ring was 5th grade when I actually beat up my bullies." 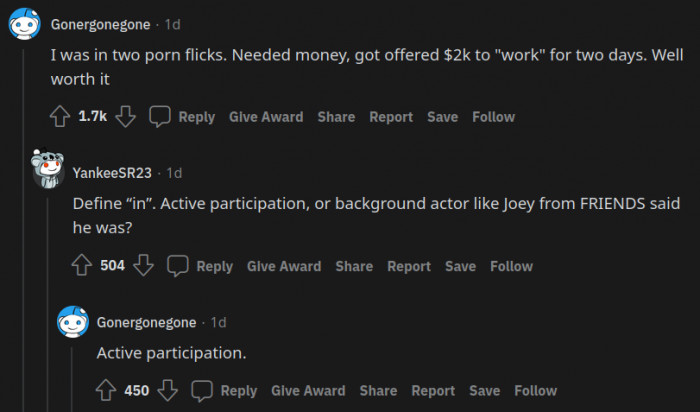 "Sometimes known as daydreaming disorder, maladaptive daydreaming describes a condition where a person regularly experiences daydreams that are intense and highly distracting3 — so distracting, in fact, that the person may stop engaging with the task or people in front of them."

People cope with abuse all sorts of ways. There's a lot of hidden trauma out there, so be kind as you go about your days.

"Hyperthymesia, or highly superior autobiographical memory (HSAM), is a condition that leads people to be able to remember an abnormally large number of their life experiences in vivid detail."

According to Wikipedia: "It is extraordinarily rare, with only about 60 people in the world having been diagnosed with the condition as of 2021."

Anyone can be smart with at least one topic. 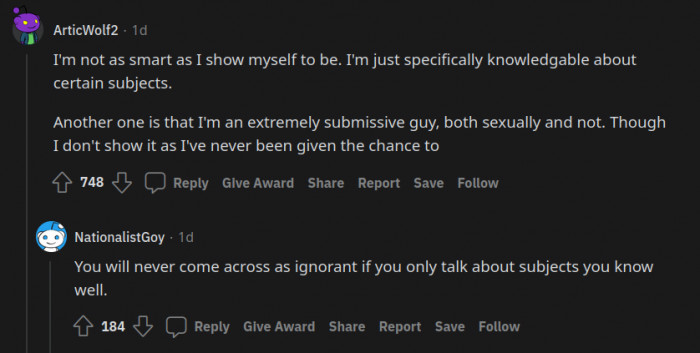 "The requirement for women to exclusively wear long skirts/dresses. If they don't then get sexually assaulted, it would be the girl's fault."

"Contacting people outside of the cult wasn't allowed, if you decide to leave no one is allowed to associate themselves with you or contact you again (even if ur biologically family), all finance went to them, no celebrating birthdays or any personal dates, believing that Satan owns the earth right now, no blood transfusions (worst one imo because someone very dear to me required a blood transfusion for an operation, he ended up not doing it and passed away.)

Also during funerals everyone celebrated it like a party, shit you not there was 3 different flavours of cake to choose from next to this dead man's casket."

Who doesn't appreciate a secret stash of smut? 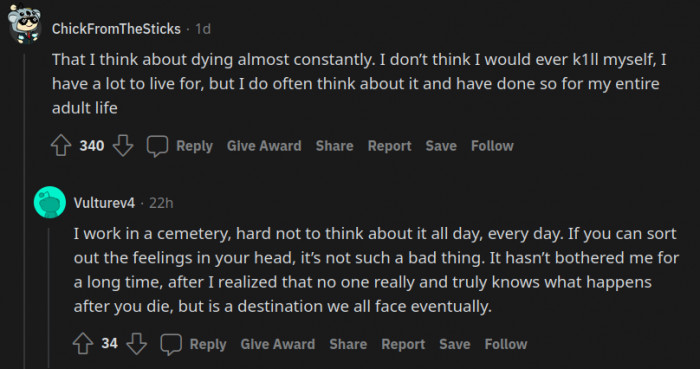 Going out on a high a note.

You don't have to divulge your deepest, darkest secrets here today on social media, but if you have an honesty itch to scratch, Reddit might just be the perfect place for you to scratch it. Clearly, that's a social website that has no plans to slow it's roll and we couldn't be more stoked.