A woman from Nebraska was shot on video while coughing on a mother and her toddler in a supermarket store. Janene Hoskovec, 54, called Anti-Mask Karen on the internet, was dismissed by SAP, a German software corporation, after a video of the incident went viral.

The video, which was shot by the mother, was first shared on Reddit and then swiftly spread to other sites. The mother, who goes by the Reddit handle Jessabird, said she was out shopping when Hoskovec approached her and asked why she was wearing a mask.

Hoskovec started ranting about how she is a native Nebraskan and how unfortunate it is that some Nebraskans have turned into sheep.

“So my kid and I were at the store tonight to pick up a few groceries when this lady approached us and said politely, ‘Excuse me,’ and to be honest I thought she was going to ask me for help or ask where something was,” Jessabird said.

“I was about to say ‘I don’t work here, lady,’ when she asked why we were wearing masks. That’s when I realized that she wasn’t wearing one herself. I started walking away, while replying, ‘Because of the Delta variant, and also because there’s a mandate.'”

This woman from Nebraska went viral because of her actions 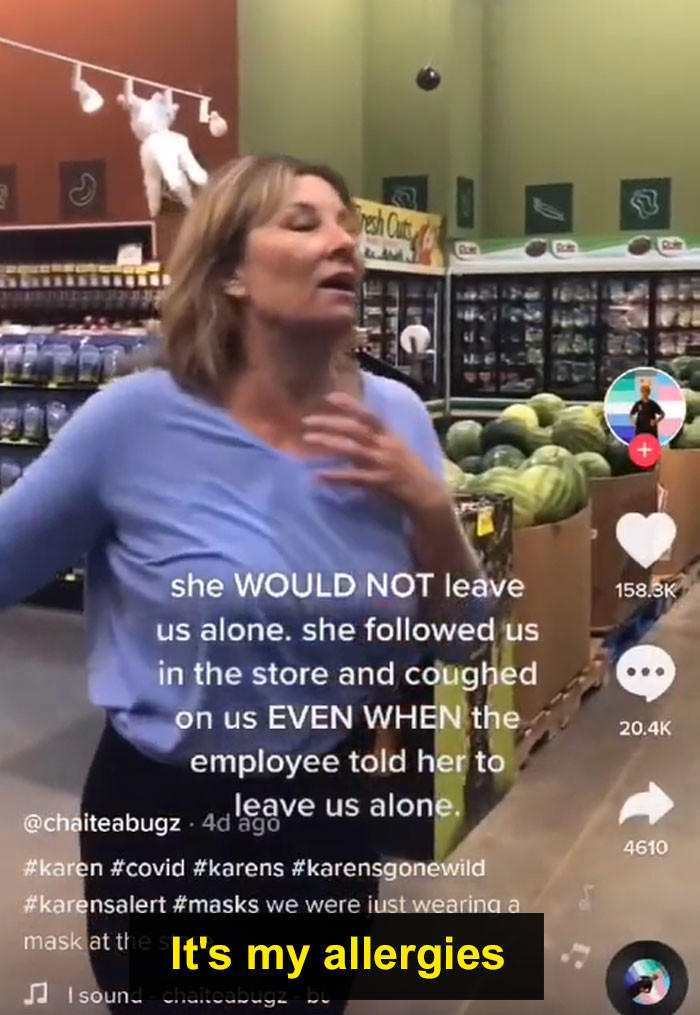 She was deliberately coughing on a woman and her child 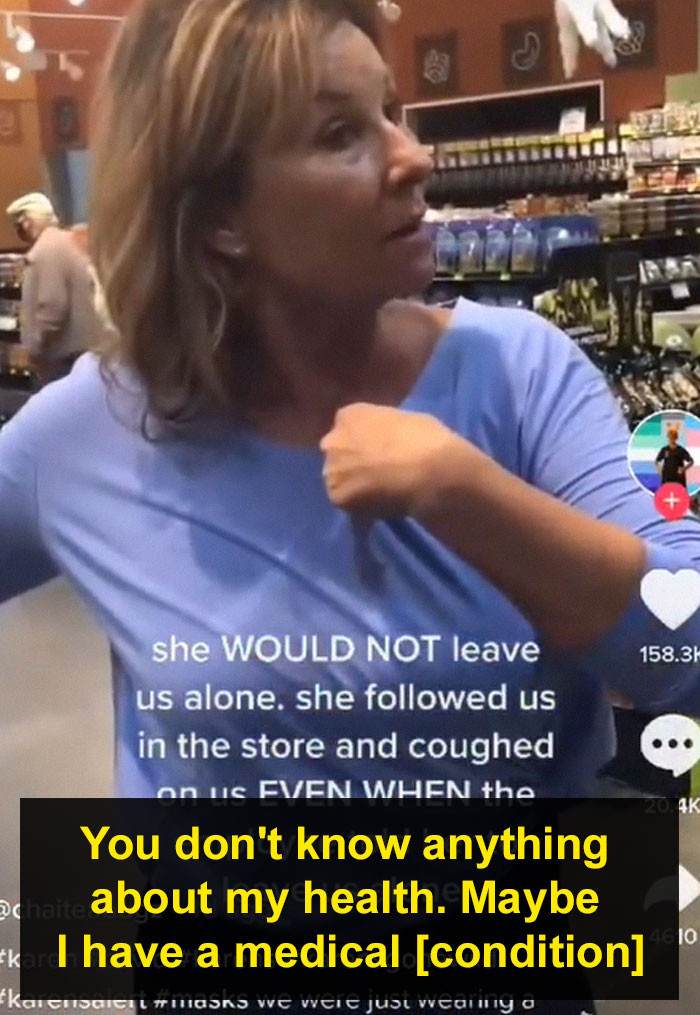 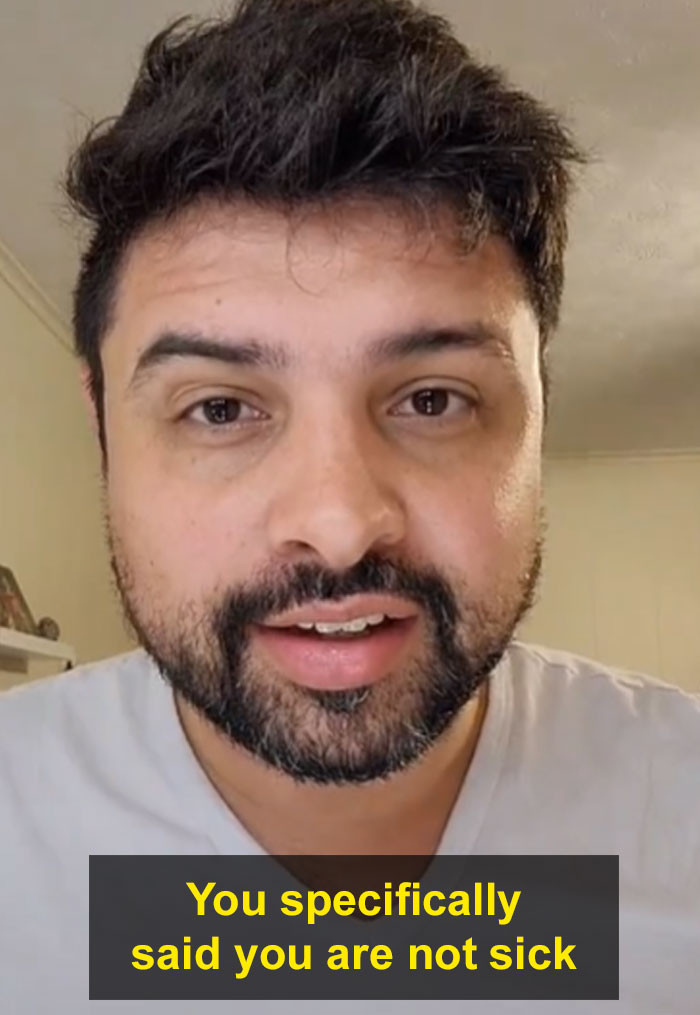 And people were appalled 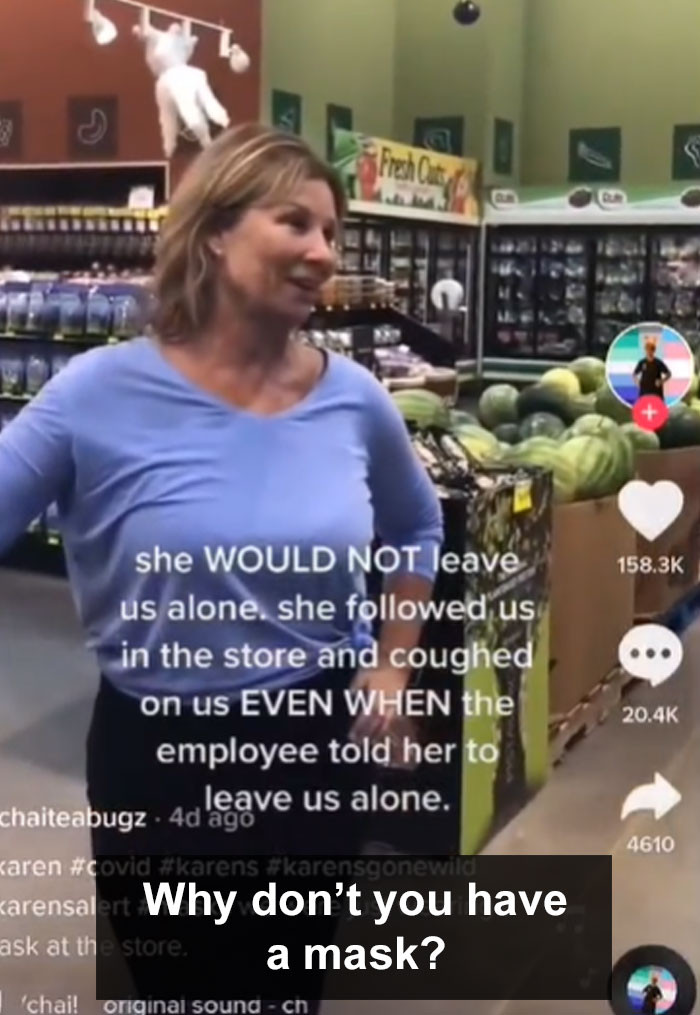 This woman is unbelievable 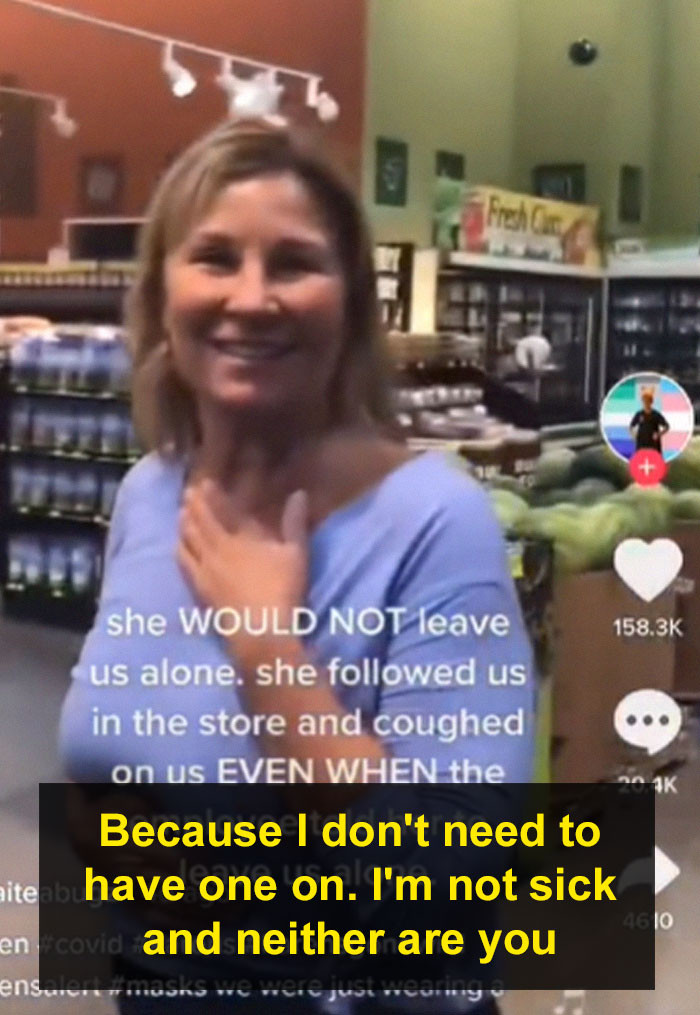 A man working at the store tried to intervene and told everyone just to go their separate ways.

“Karen walked away, and I told the guy what happened,” Jessabird recalled. “He said it wasn’t the first time he’s had to deal with people like her at work. I then tried to continue my shopping, but this lady followed me around the store.

I told her she needs to keep her distance and that her coughing on me was assault. She laughed and kept saying, ‘Look at you, it’s so cute how scared you are!’ By this time, I was absolutely livid, trying my best to hold it together in front of my kid. I didn’t finish my shopping, instead, I went to the self-checkout to pay for my stuff.

[Then], she followed me to use the self-checkout right next to mine. I informed the employee manning the checkouts that this woman had assaulted me in the store by coughing deliberately on me, but I didn’t wait around to see what the employee would say in response. I just really wanted to get us the heck out of there.”

Her identity did not remain secret for long. 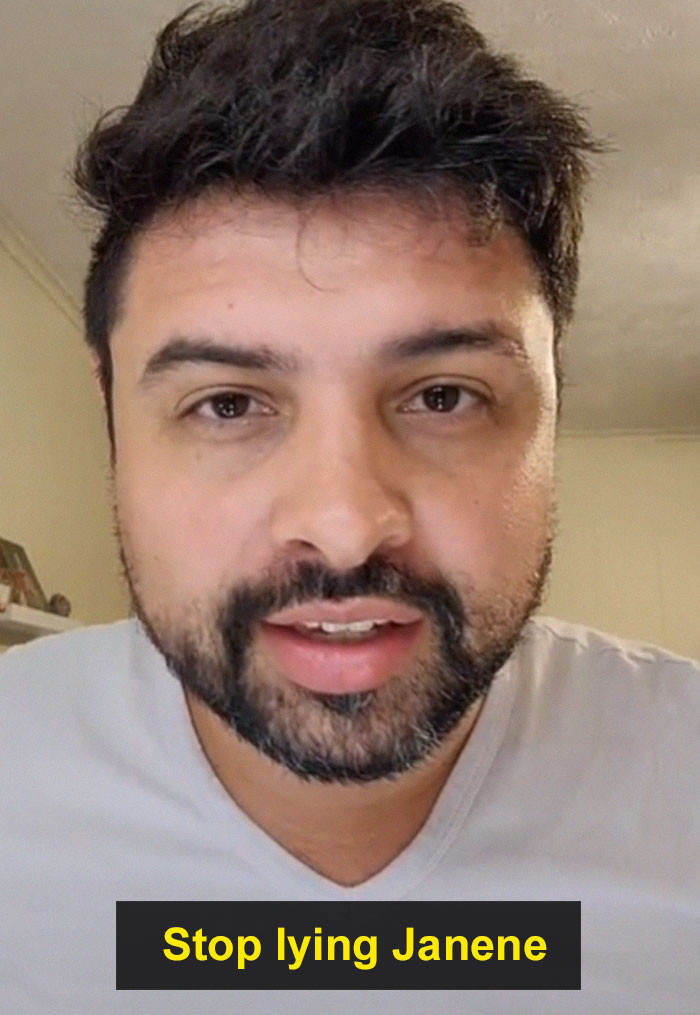 Janene got into a lot of trouble 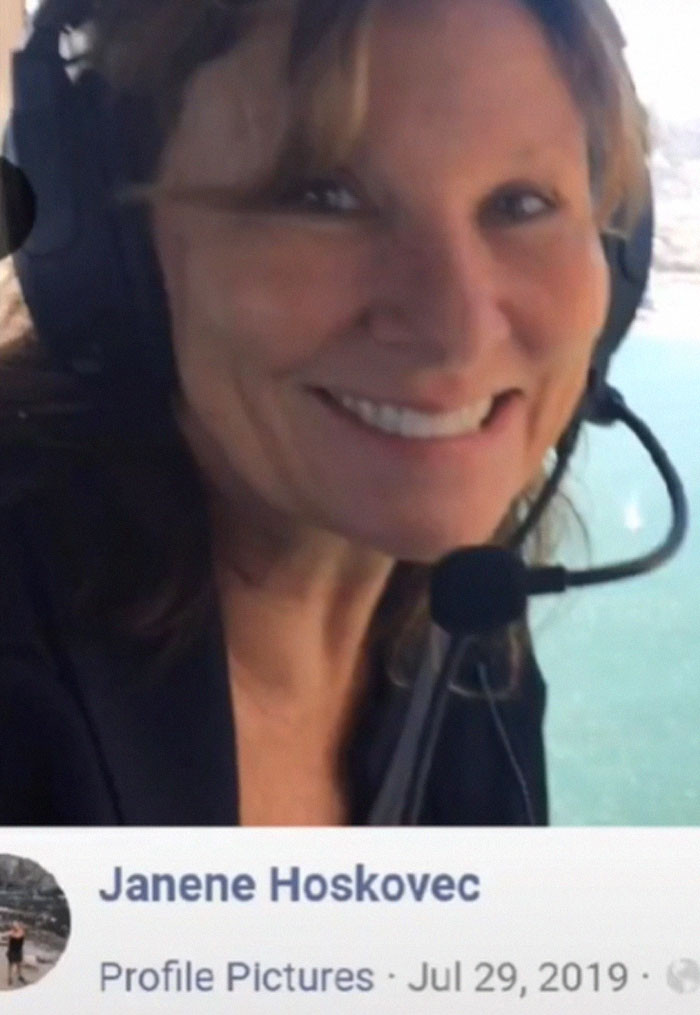 SAP, her employer, fired her... 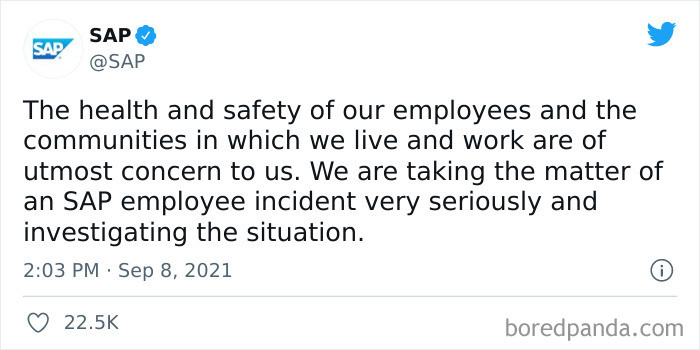 After reviewing the situation.

And people online were satisfied. 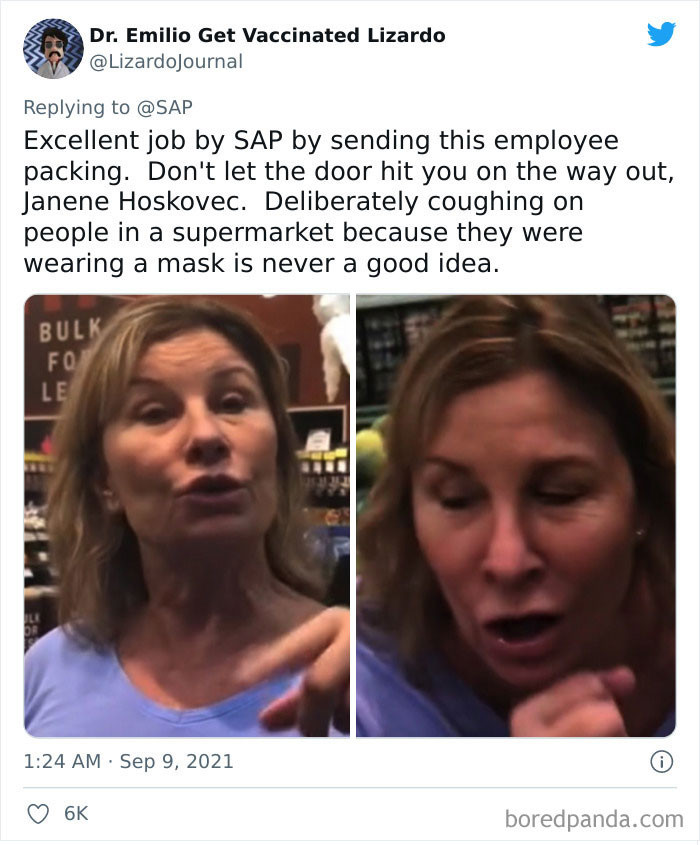 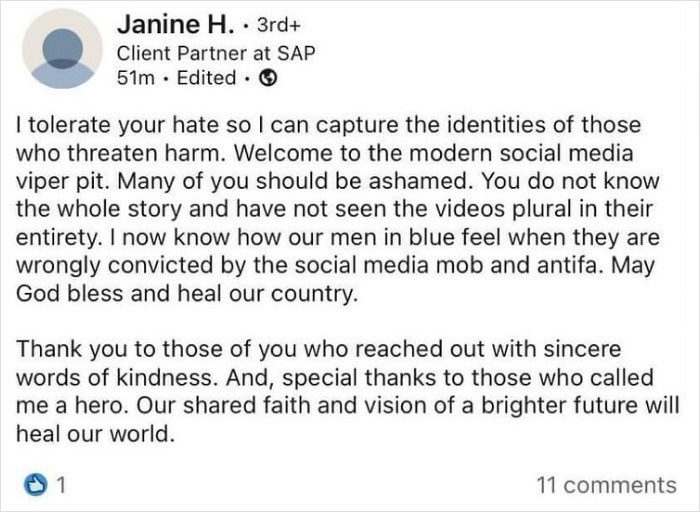 And people hated her even more:

It was clearly deliberate... 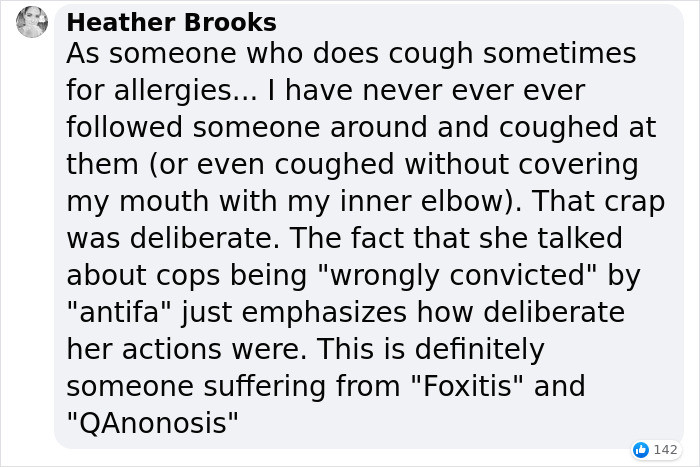 Unfortunately, it can happen

Because there are a lot of strange people out there....

Good point. Criminal charges would be in order...

Some people are simply unbelievable. What is their problem?

How can they be proud of the fact they don’t give a damn about anyone else? Even if there were no coronavirus around, this would be extremely gross and unhealthy.

Luckily, this woman was identified and sanctioned, but there are many more like her out there…