30 Heartwarming Pictures Of Dogs Before And After Adoption

Every pet deserves a good and loving home, and in a perfect world, they would have it. We took them from the wild thousands of years ago, made them lose their survival skills, and taught them to be at our sides. And now we discard them when we get bored with them. It’s incredible how cruel we can sometimes be.

In a perfect world, there wouldn’t be any need for animal shelters. Luckily, some people are working hard on reducing the need for them. They are adopting animals and sharing their before and after photos, thus raising awareness.

Most importantly, they show all of us who have dilemmas about adopting what difference we can make in one poor animal’s life, and then globally. We have compiled a list of the best photos from the r/BeforeNAfterAdoption subreddit, and we know you are going to enjoy them

1. "It's Been 4 Months Since I Caught Marley And Her Puppies. She Was Living As Part Of A Feral Pack For 13 Months After Being Abandoned, And It Took Me 3 Months To Gain Her Trust. She Seems To Know Everything's Going To Be Alright Now" 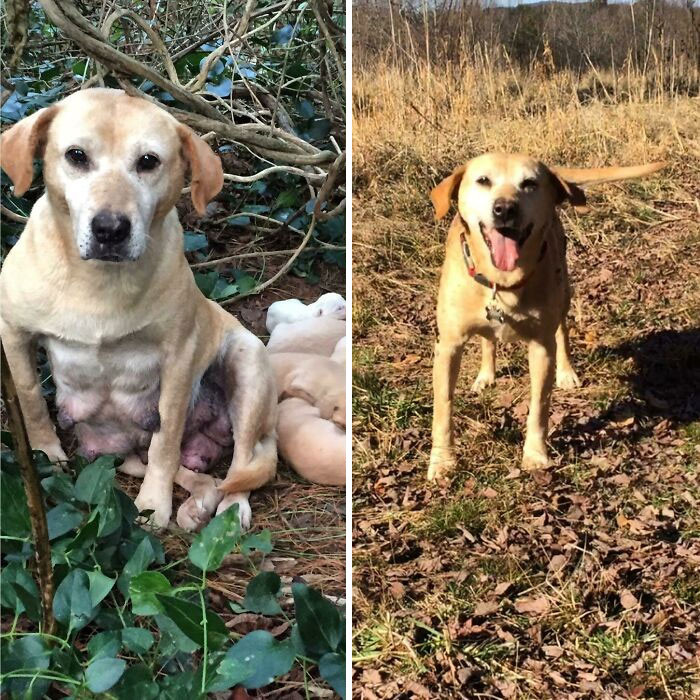 2. "Rescued Peanut 6 Months Ago From An Abusive Home. He Had Fleas Everywhere And Was Very Matted So I Had To Shave Him" 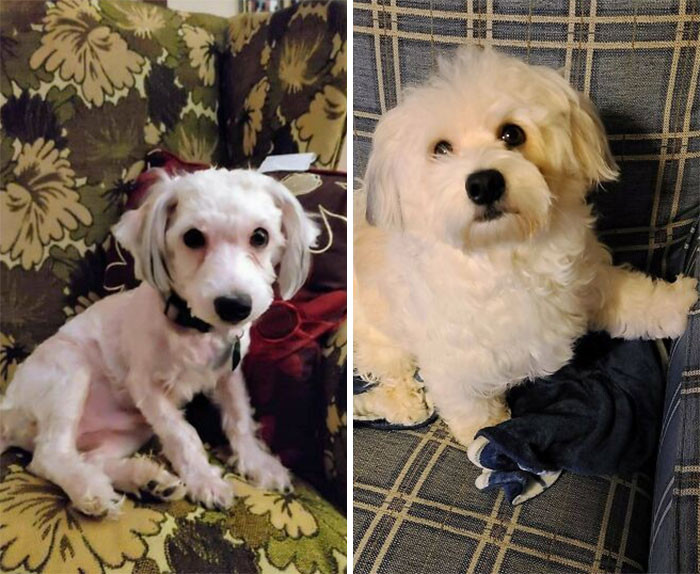 3. "He Went From Mistreated, Frail And On The Verge Of Death To A Happy Pupper With A Heart Of Gold! Meet Jack" 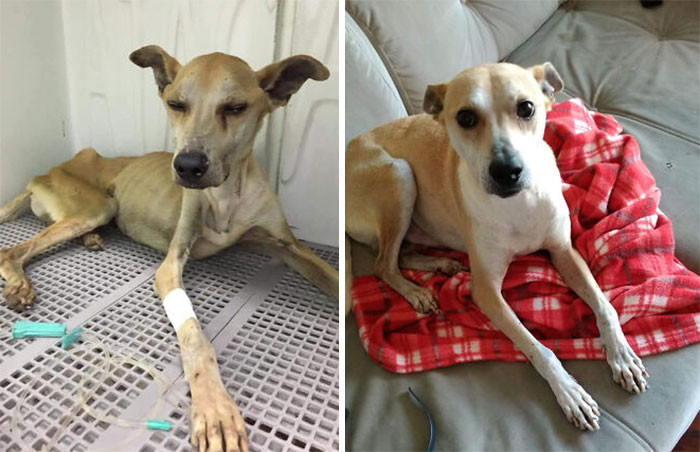 4. "Miley, Who Came To Me As A Hospice Foster Dog Since She Wasn’t Expected To Live And We Just Wanted To Make Her Comfortable. This Is Her, A Year And A Half Later!" 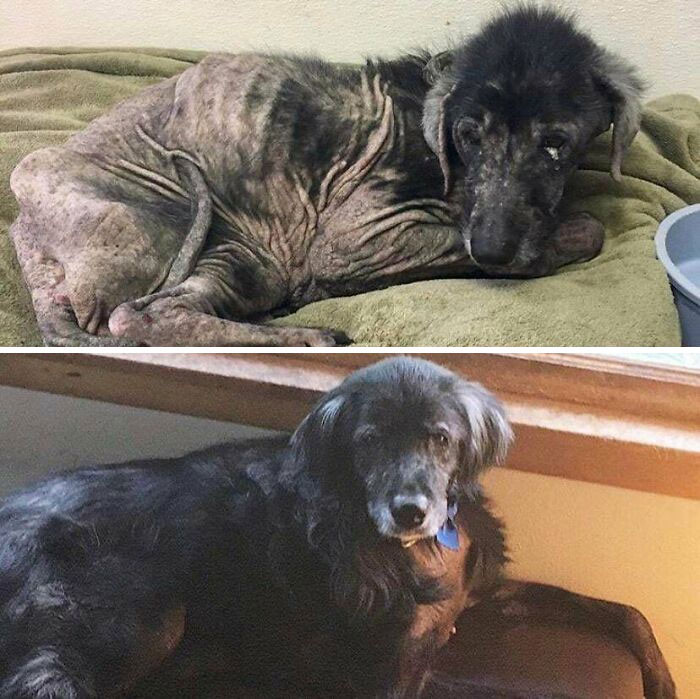 With more than 3.3 million pooches going into animal shelters each year, the ASPCA people are experts on the adoption subject.

Kelly DiCicco, their Adoptions Promotions Manager, told the reporters that people shouldn't rush things when it comes to presenting pets to new family members. Patience will pay off eventually. The same methods apply both to dogs and cats.

"Do not approach the dog or cat, but allow them to come to you. If the animal begins to show signs of feeling uncomfortable, you should end your session and try again later." 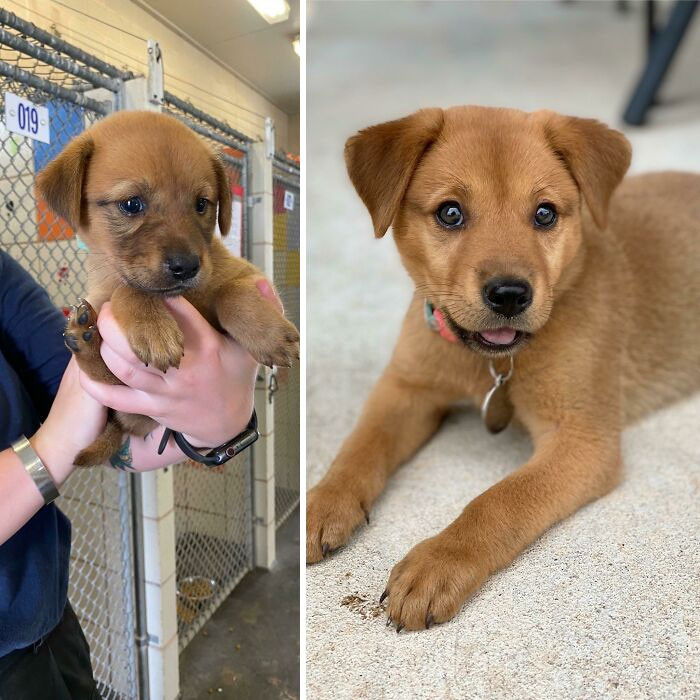 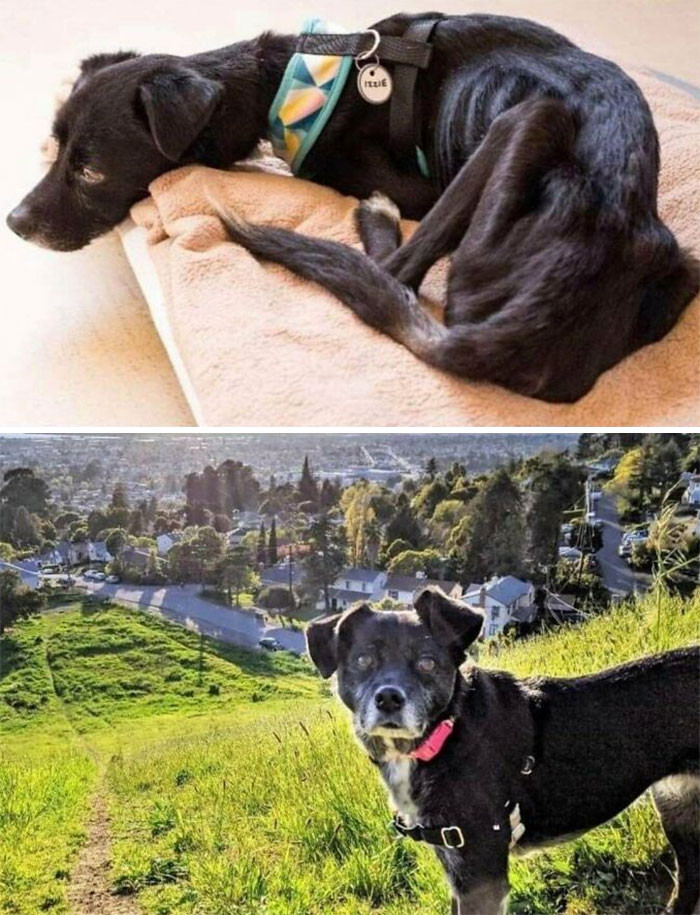 7. "Coco Came To Us Skin And Bones. Fast Forward A Few Months And She's A Happy, Healthy Pup With A Forever Home To Boot!" 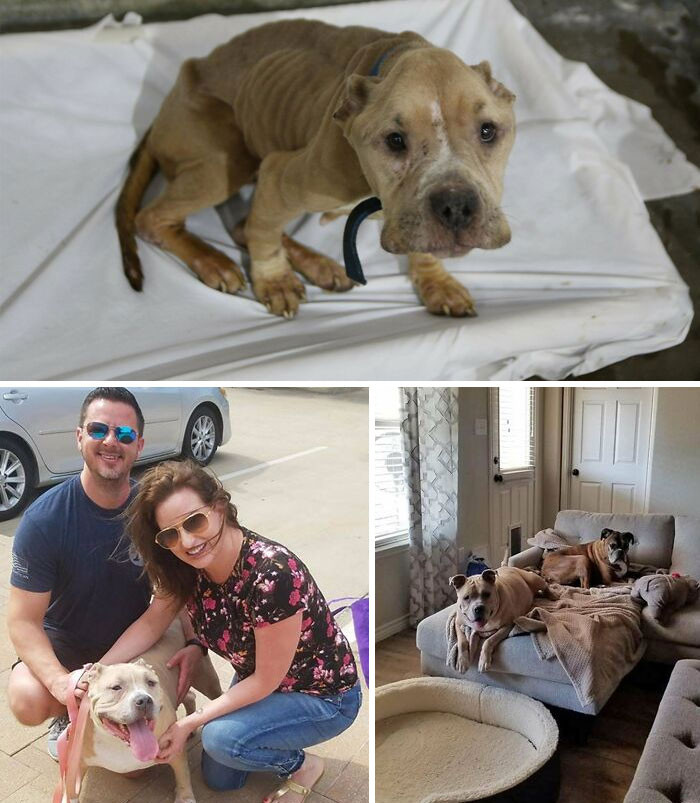 8. "This Is Lucy, From Nov 1 To Today. My Amazing Wife Saved Her From The Streets And Disease" 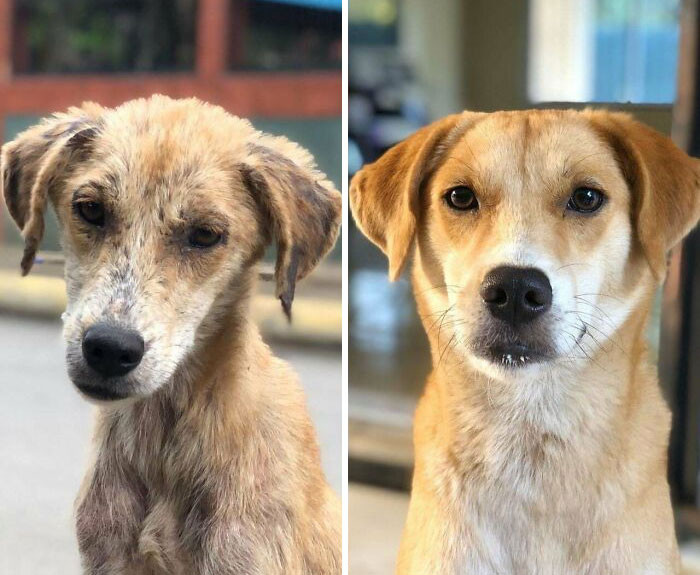 DiCicco said that some hints indicate that your new pet is feeling uneasy and wants some alone time.

“In dogs, this could include ‘whale eyes’—a term used to describe when a dog shows the whites of their eyes—paw lifts, lip licking, yawning, and pacing. In cats, this may include hissing, swatting, and keeping their ears pinned back,” she explained.

“People don’t like being forced to interact with someone they’re not comfortable with, and neither do pets! Giving the dog or cat a few of its favorite tasty treats during these sessions can help.”

This is so true – treats always help, even with humans.

9. "Meet Julie. This Is About 6 Weeks Of Progress" 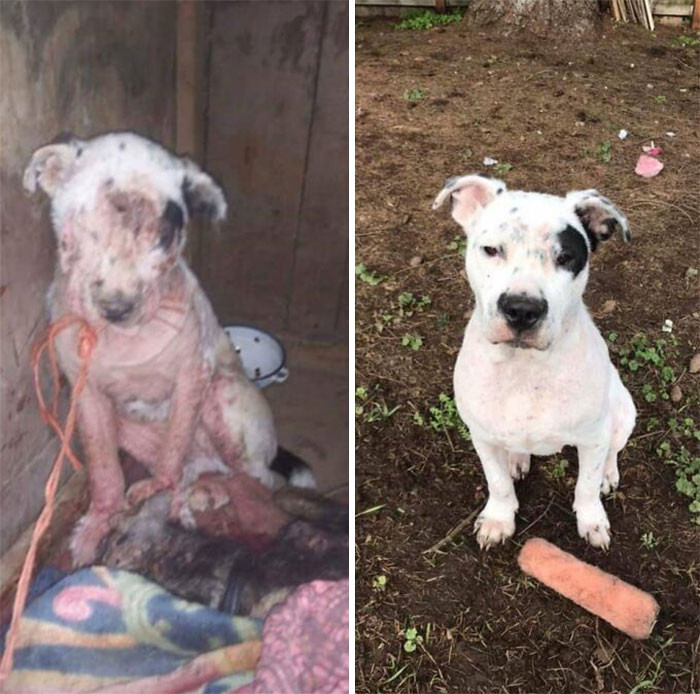 10. "My Friend Adopted A Senior Dog That Had Been Shot In The Leg And Left To Die. These Pictures Are A Day Apart" 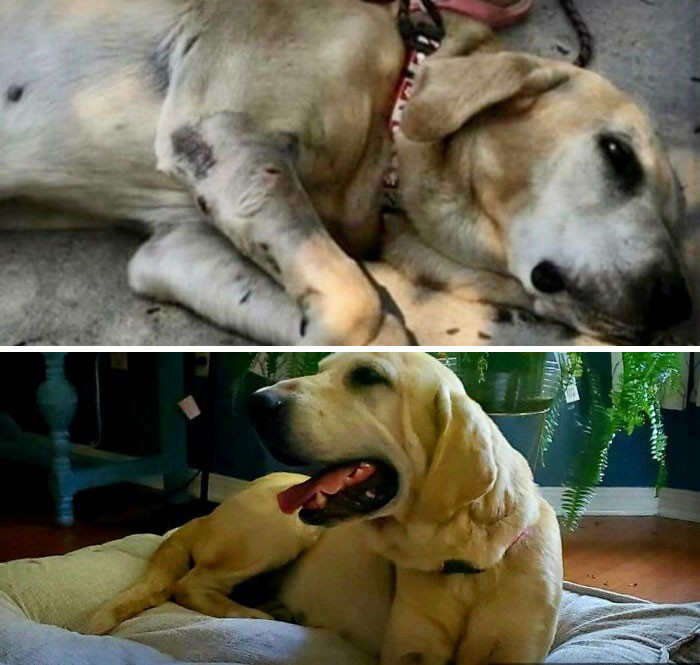 11. "Wilbur Was Found As A Stray, Missing Hair, Underweight And His Whole Body Was Inflamed Due To Allergies. Two Years Later My Boy Is Happy, Healthy And The Love Of My Life!" 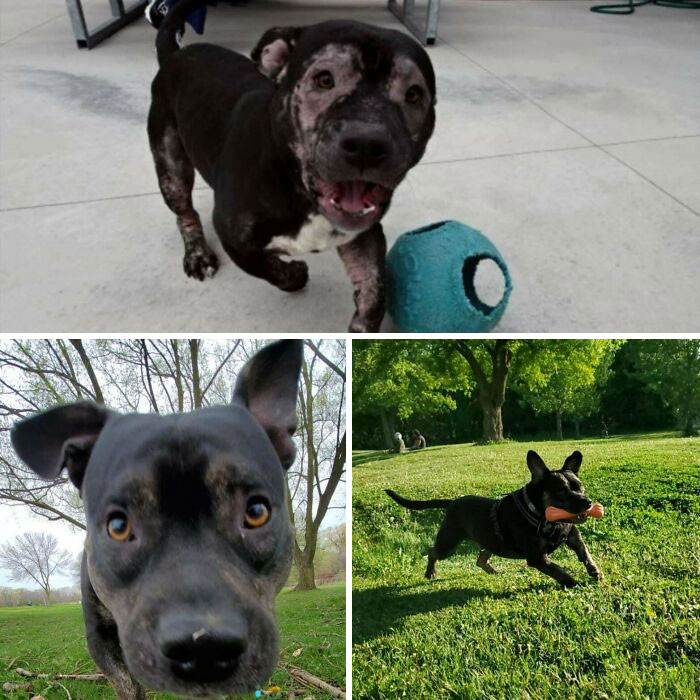 12. "Our Foster Pup When She Was Found On The Streets As A Sick, Discarded, Breeder Mama And Then A Few Days Ago, Napping Peacefully On Our Bed" 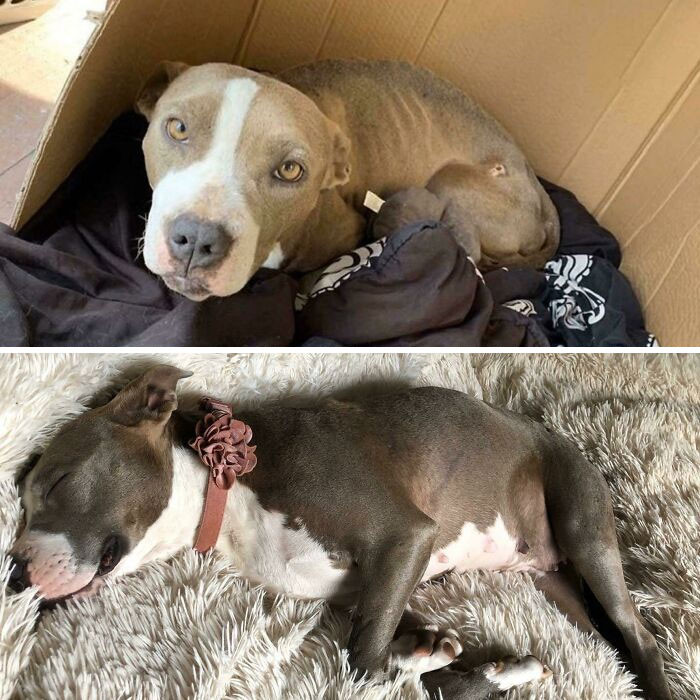 DiCicco added that keeping “an open mind and heart” is best when going to an animal shelter. You might end up taking home a pet you never even considered earlier. DiCicco emphasized that people who want to adopt a pet should ask the shelter staff absolutely everything they want to know.

“Every shelter has a unique population of animals, and no one knows them like the people who work with them every day. Plus, shelter staff have expertise in making successful matches and can help prospective adopters decide whether an animal is a good personality and lifestyle fit. They also consider a potential adopter’s lifestyle, home environment, and the animal’s potential compatibility with children and other animals in the home in order to make matches that are a good fit,” she concluded.

13. "Patron Was Found Discarded In A Trash Bag On The Side Of The Highway At 4 Weeks Old. 8 Weeks Later, He’s A Very Happy Boy And We Couldn’t Love Him More!" 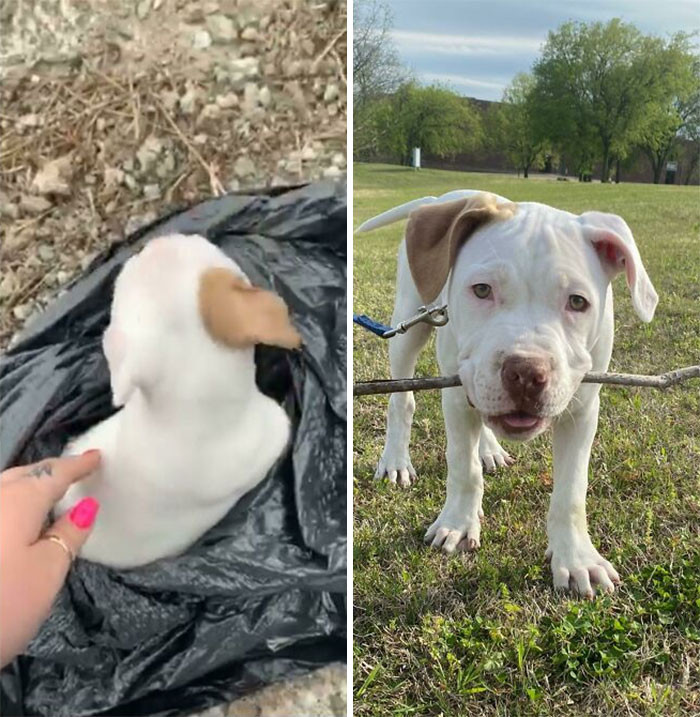 14. "The Car Ride Home, She Trembled And Hid Her Face; Now, Her True Personality Shines Through! She’s Silly!" 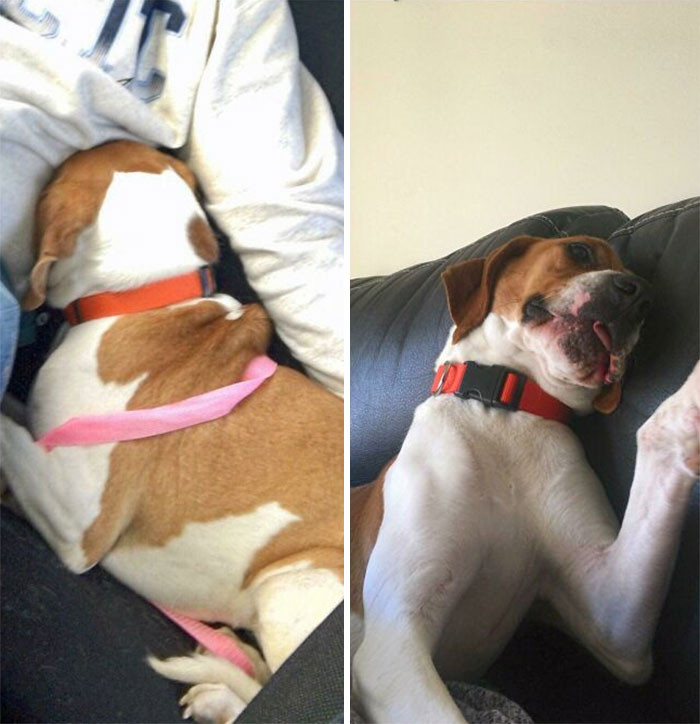 15. "Charlie Before And After His Adoption" 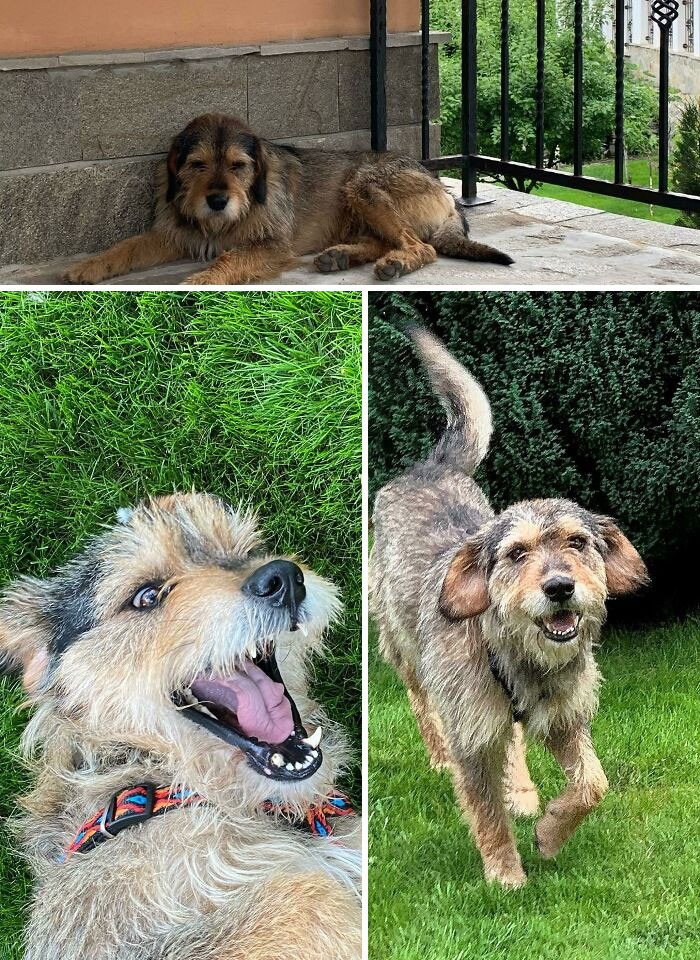 16. "Hiya, This Is Rimosa! I Rescued Her Back In June Of 2019. She Had Yeast, Heart Worms, Lots Of Other Infections, Missing Teeth, She Was Missing Most Of Her Hair, And She Had Been Beaten. She's Fine Now, Top Picture Was The Day I Brought Her Home And The Other Was Last Week. Working On Her Manners Now" 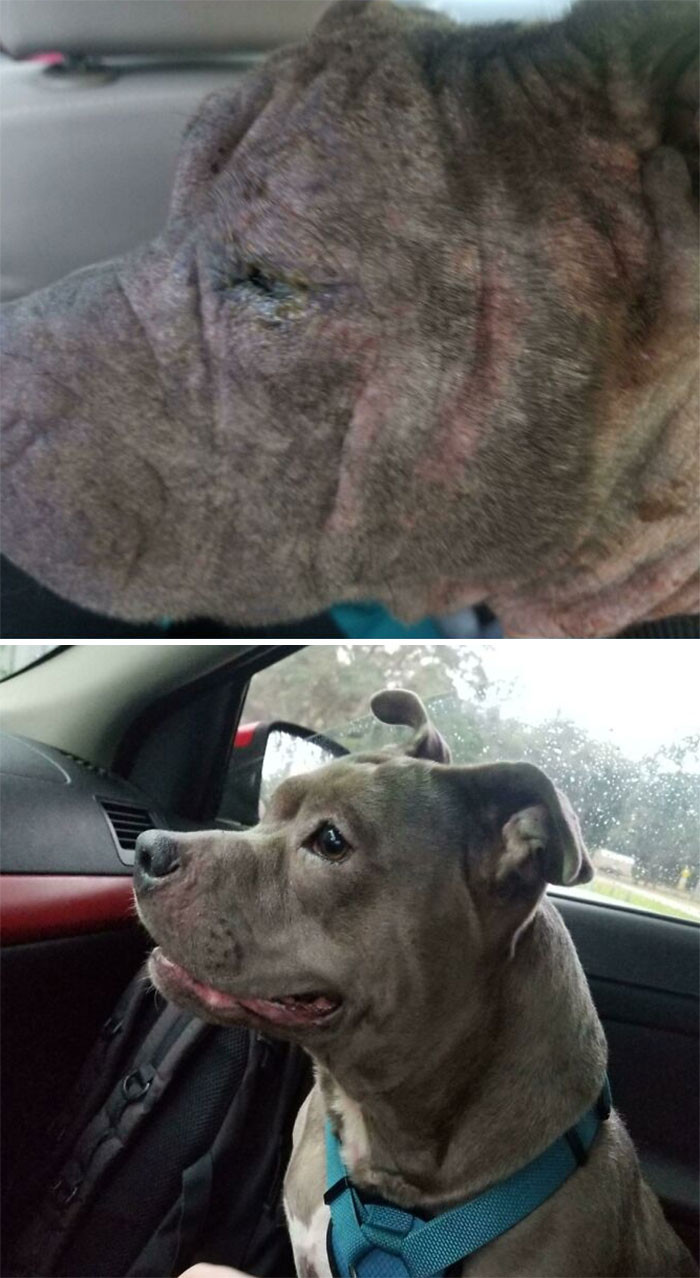 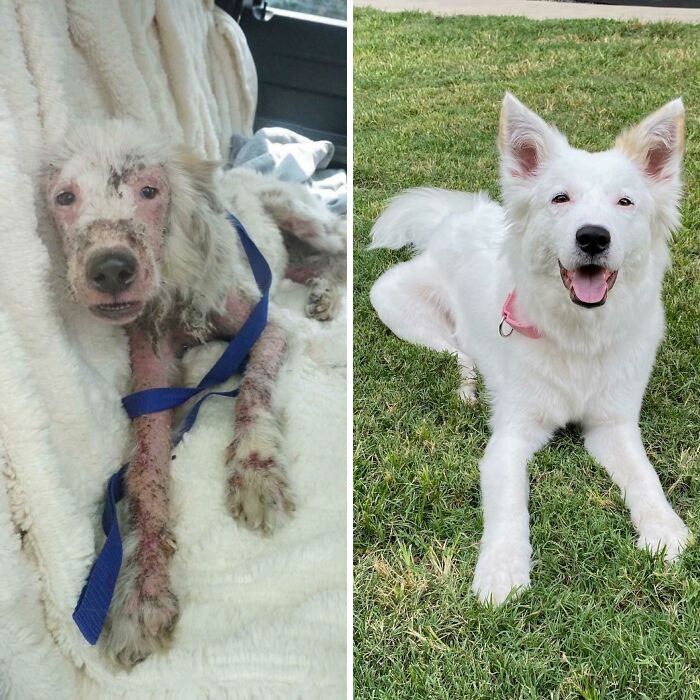 18. "This Boy Came To My Partner And I As A Foster Dog, But Within Hours Of Meeting We Knew We Wanted To Keep Him Forever. Introducing Hades, My Big Soft Goofball" 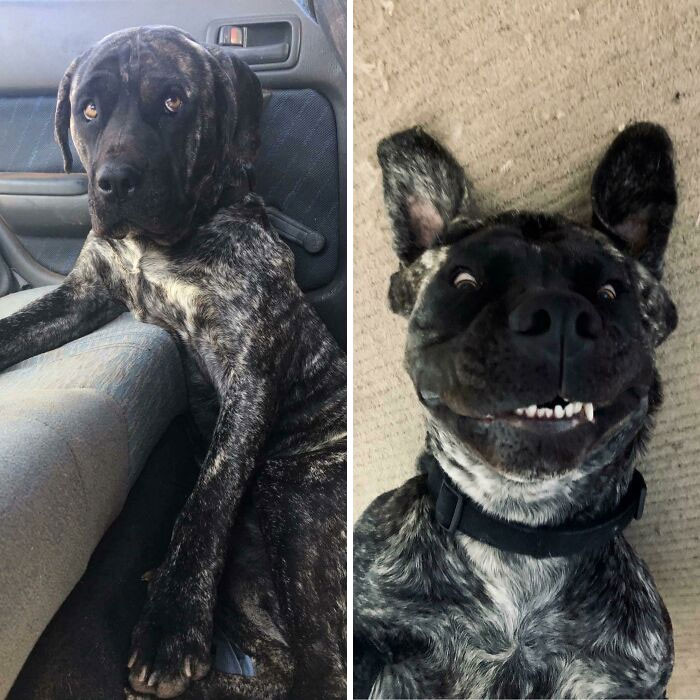 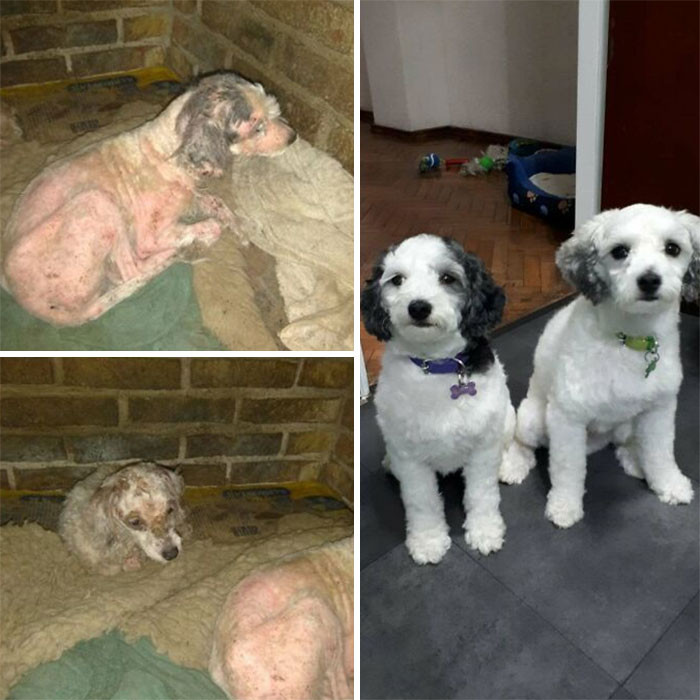 20. "I Adopted My Sweet Girl From A Kill Shelter In Atlanta, Georgia. She’s Living Her Best Life In Halifax, Nova Scotia!" 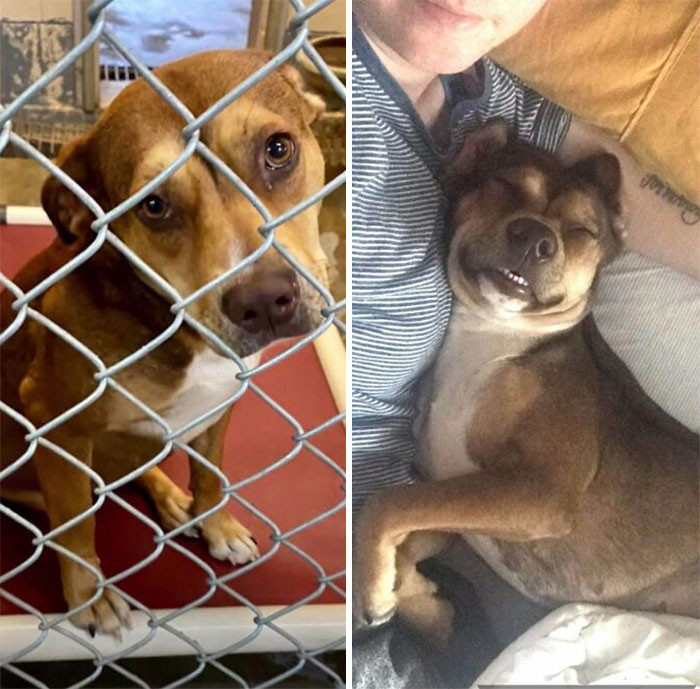 21. "From A Hoarder House With 100+ Dogs To A Home Of Her Own! I Had Fostered Her Since November And Officially Adopted Her Last Month!" 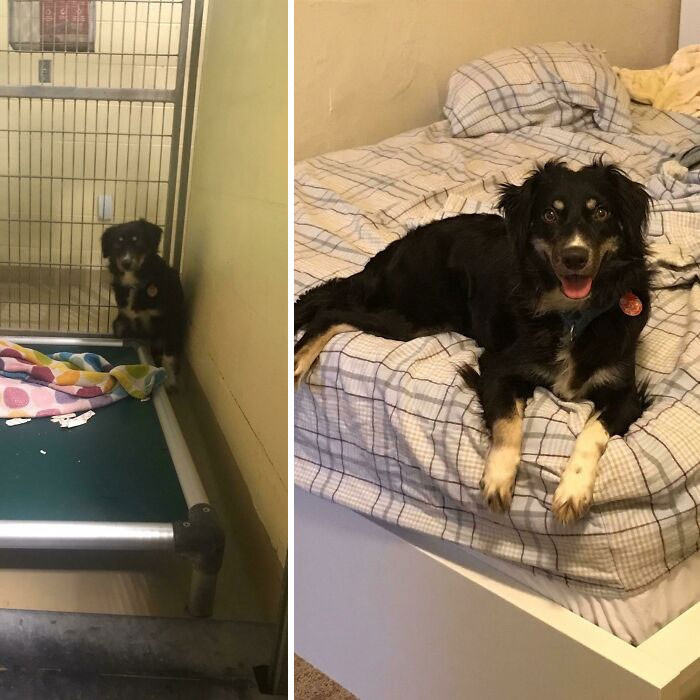 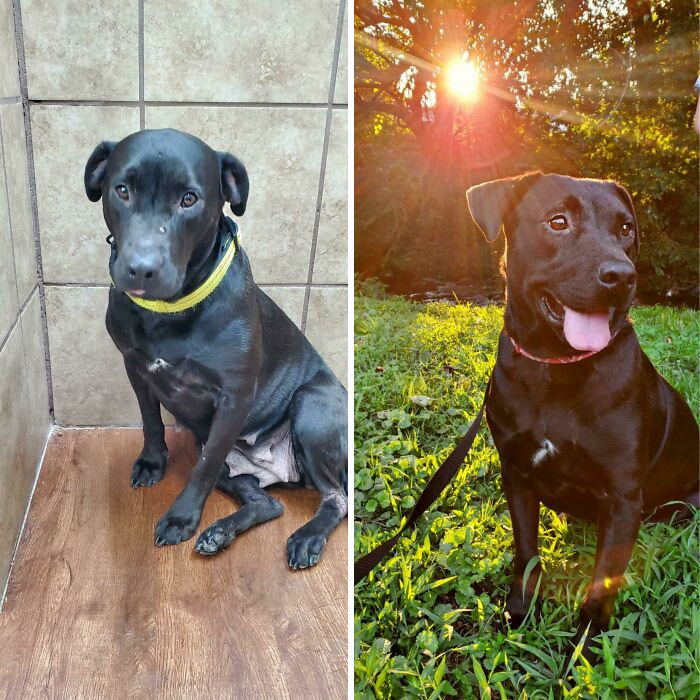 23. "Yesterday Was Lupa's Gotcha Day, This Is The Difference A Year In A Good Home Makes!" 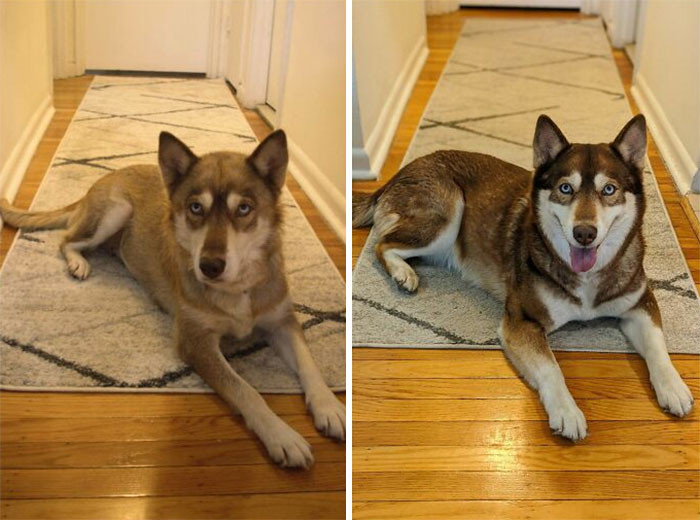 24. "Harvey Was Born The Runt Of A 12 Puppy Litter. The First Picture Is His First Day With Us At 3.5 Pounds And Lots Of Health Issues. He’s Now 32 Pounds And Getting Quite Handsome!" 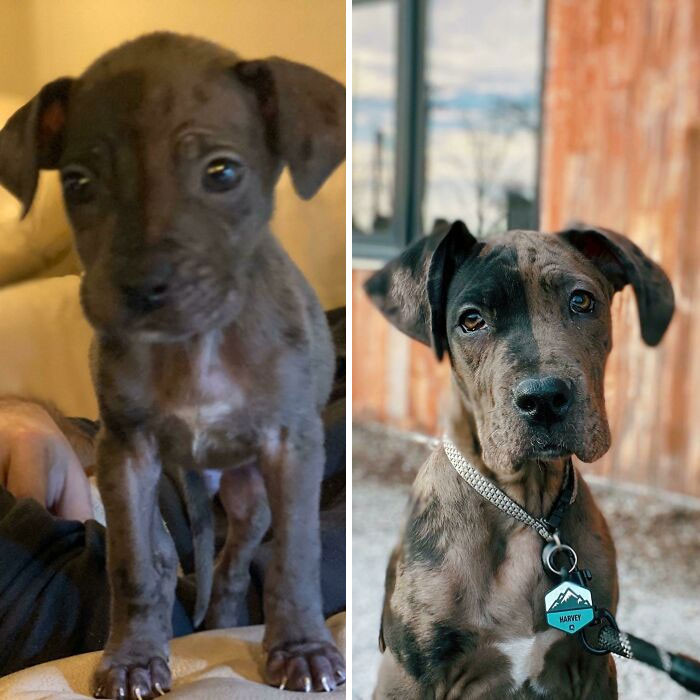 25. "From The Little Girl On Doggy Death Row (Hours From Being Put Down), Too Scared To Come Out Of Her Crate To Eat, To Today. Happy Gotcha Day To Wags!" 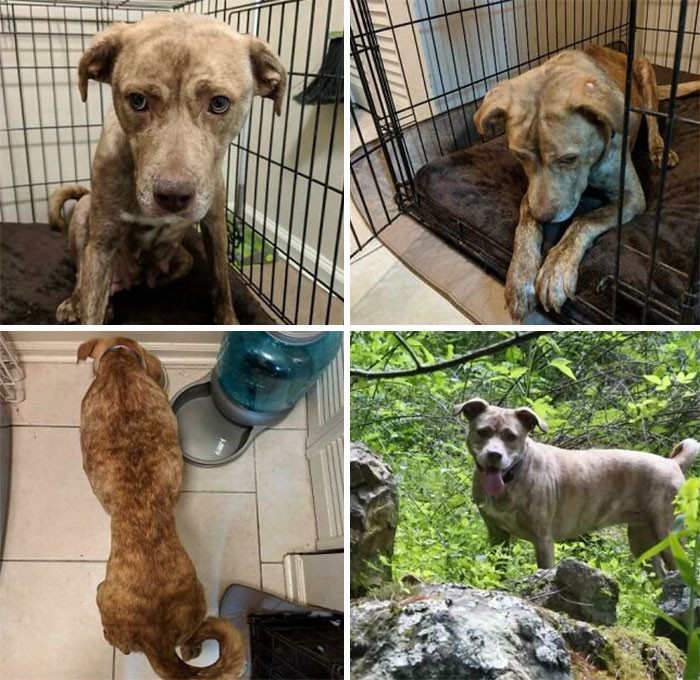 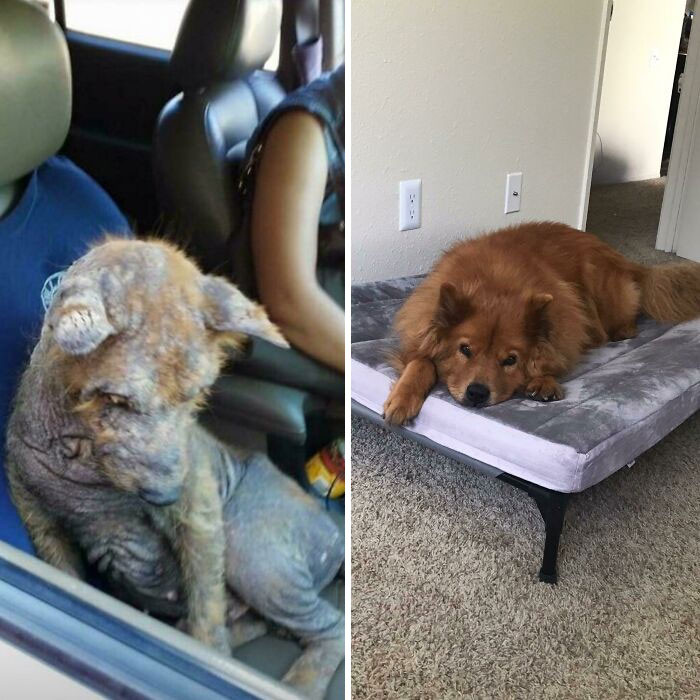 28. "Mary, The Dog Rescued From The Street With A Collar Ingrown To Her Trachea. Before And After In 2 Months" 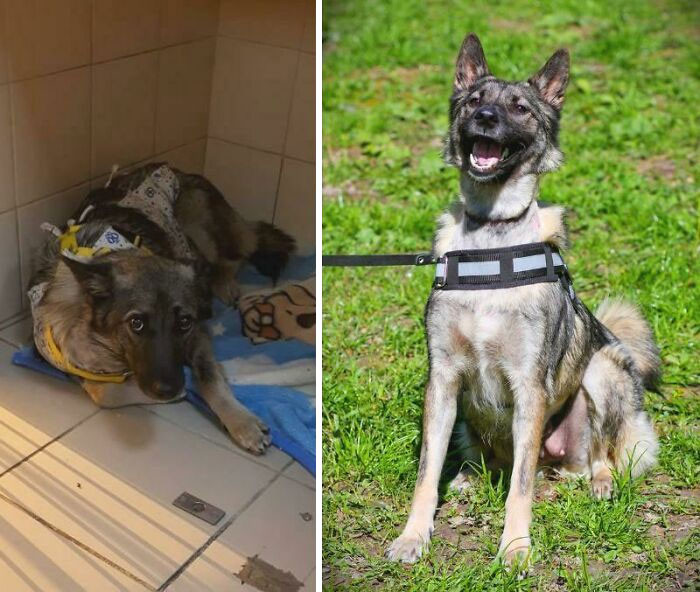 29. "My Foster Dog The Day He Was Rescued From Animal Hoarders, And Today" 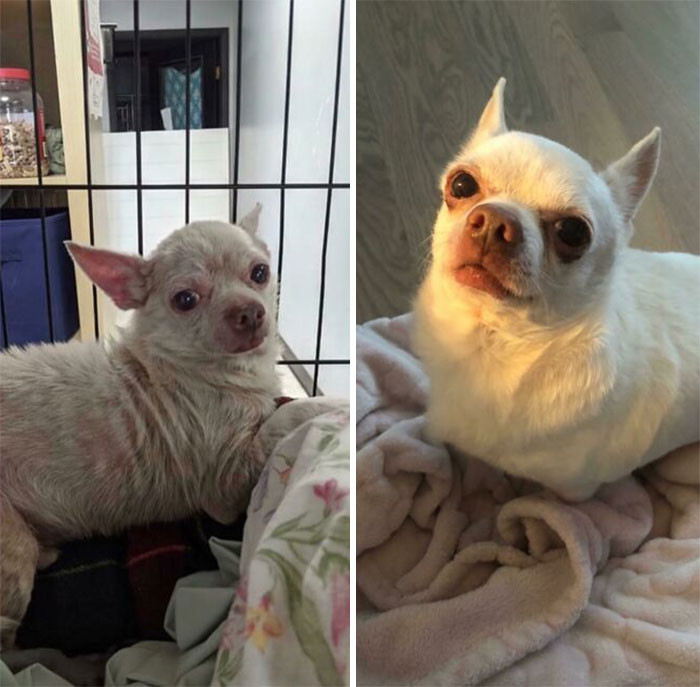 30. "Brodie Was Brought Into The Shelter After His Mom Attacked Him. Now He's A Qualified Therapy Dog For People With Disabilities 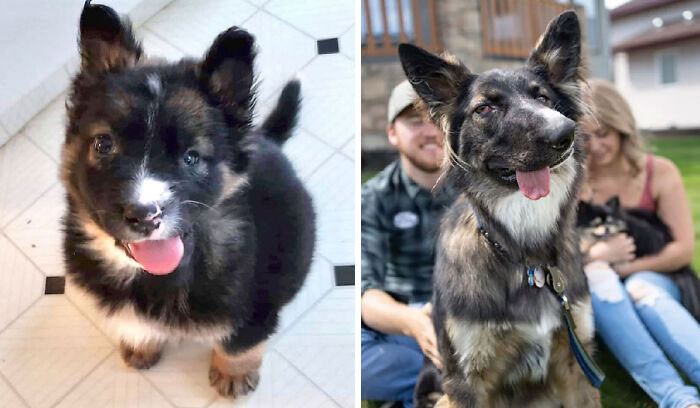