How 100 Years Have Changed Your Favorite Dog Breeds

Dogs have been man's best friend for over thousands of years, and over the last 100 years especially, it has been very easy to see that change human intervention has caused.

Some aspects of our favorite pets can be exaggerated when breeders choose the dogs that show these traits that are appealing. Selective breeding has changed many characteristics of our favorite dogs, and while they are still so cute, sometimes the changes aren't for the better...

Our wonderful sausage dogs now have longer faces and bodies, and their tummies have dropped a lot lower to the ground due to much shorter legs.

The red and black colors in these special guard dogs have changed dramatically, with a shorter snout and dropped shoulders. Docking isn't considered a breed standard anymore either, meaning sometimes you can see them with more than just a wiggly bean on the end of them!

German Shepherds have somewhat lost their intimidating look due to the sloped back many of them have. Their fur is a lot thicker, and color more pronounced, with a wider chest which keeps them formidable.

These dogs have become a lot more stocky, with flat faces and very wide shoulders. Their back ends have dropped down as well, losing their square looking gait. Sometimes they have their ears clipped to be triangular, to give them a menacing look. Click on the next page to see some more breeds that have been affected in the last 100 years.

The boxer's face is now a lot shorter, and it is accepted in the breed standard to not have clipped ears. They are more commonly a brown color with a dark face, and tail docking is still considered the 'in' style.

The English bulldog has become a lot shorter and stockier over time. Their faces are still short, but their skin is saggier, mostly for the cuteness factor. Because of the way their hips are positioned, no bulldog can give birth naturally, and every litter needs assistance from a vet. 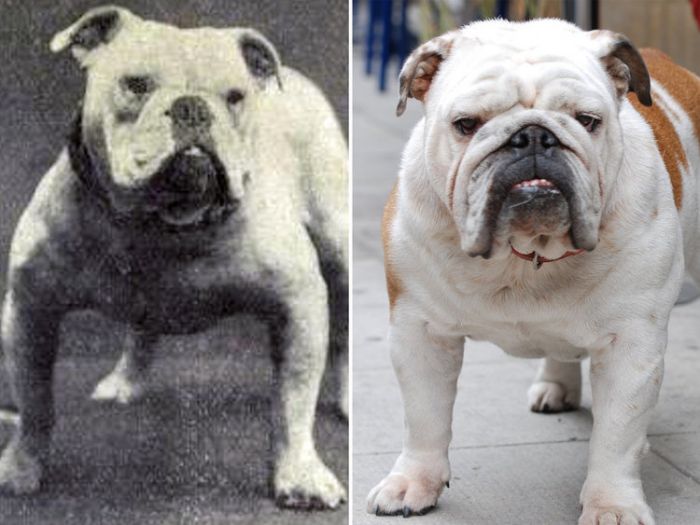 These small dogs have gotten even smaller over the years, with a sloped back and a snout that is more pointed. They're not the same as the large Doberman breed, so they haven't shrunk that much!

Skin is a lot more saggy on this breed than it was 100 years ago, with longer ears as well. Their legs are a lot shorter, similar to the dachshund. Click on the next page to see some breeds that haven't changed very much at all over the past 100 years.

100 years haven't done much to change this loyal breed, with their hair only growing a bit longer and thicker than before.

It's mostly the color change that is noticeable in this breed, as well as a light bone structure. A more feathery coat is seen as well, but not much else.

Not much has changed for the Airedale terrier, except the fluffier and longer face. You can also see that their stance is more upright near the back end, making them seem more proud.

Now I'm not even sure if I can pinpoint a difference in this breed from 100 years ago until now... Is his nose a bit more button like?

Some dog breeds are more likely to run away than other breeds. Take a look at the naughtiest dogs that are proven to make a run for it!