Doggo stories can either make you cry or lift your spirits up.

Well, the story you're about to read might both bring you to tears and make you smile. Meet Stevie Ticks, a lovely canine who recently made new friends. She received a letter from four guys.

The foursome's landlord doesn't allow them to have pets, so they sent a letter to their neighbor (sort of) begging if they could spend some time with their dog.

The response letter they got back was "better than [they] could have ever hoped for." The four guys got a response from Stevie Ticks herself!

The envelope even got a paw print on the front!

Jack McCrossan (yes, one of the four boys) posted the story on Twitter, and we couldn't help but follow it. 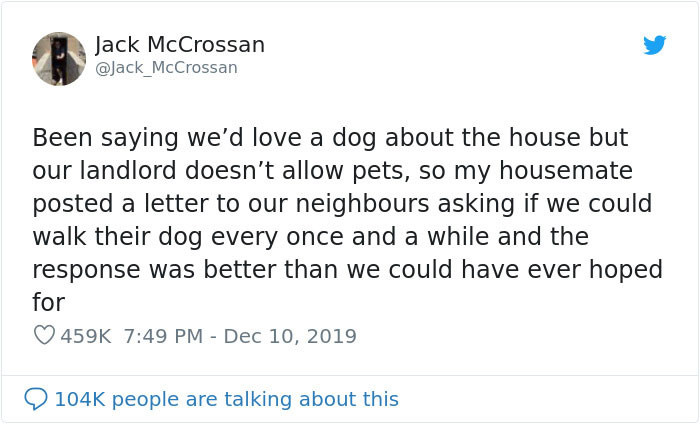 Gotta make sure the letter is squeaky clean and error-free 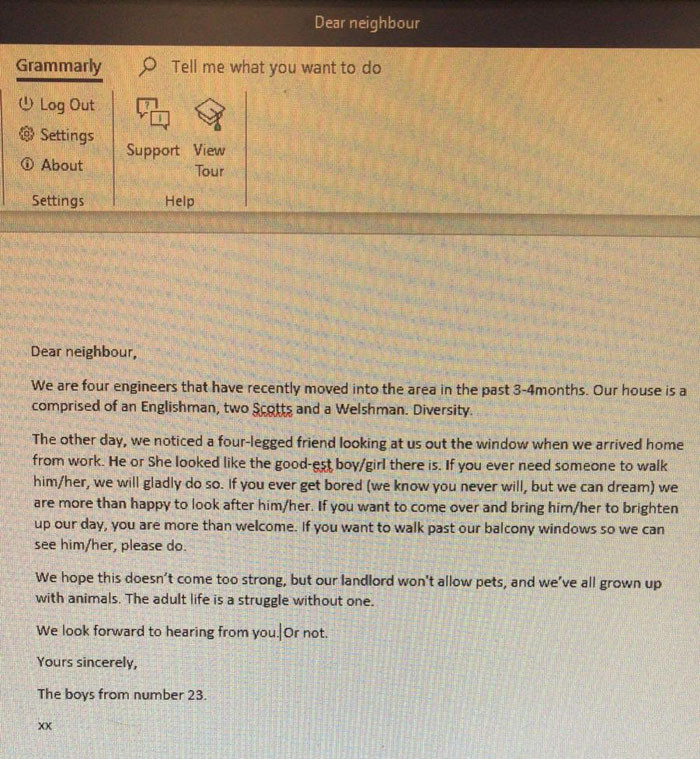 They got a response from Stevie Ticks herself! 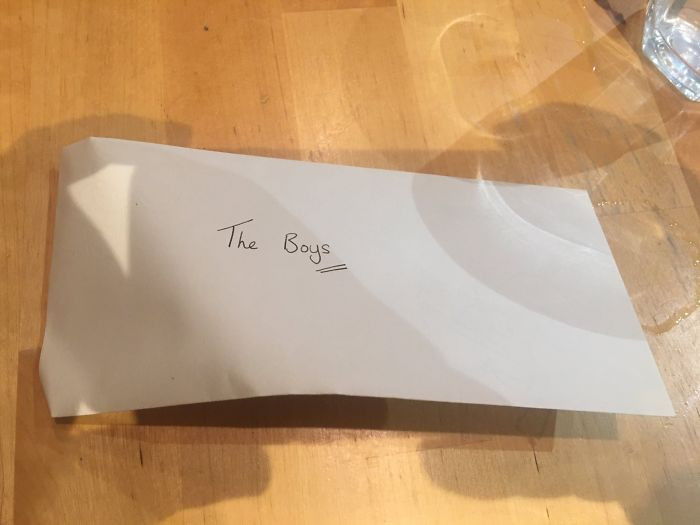 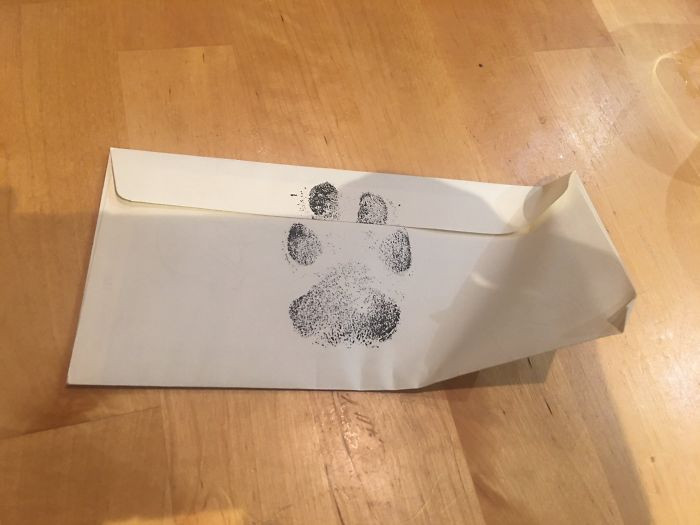 She said she's looking forward to mlemming the boys 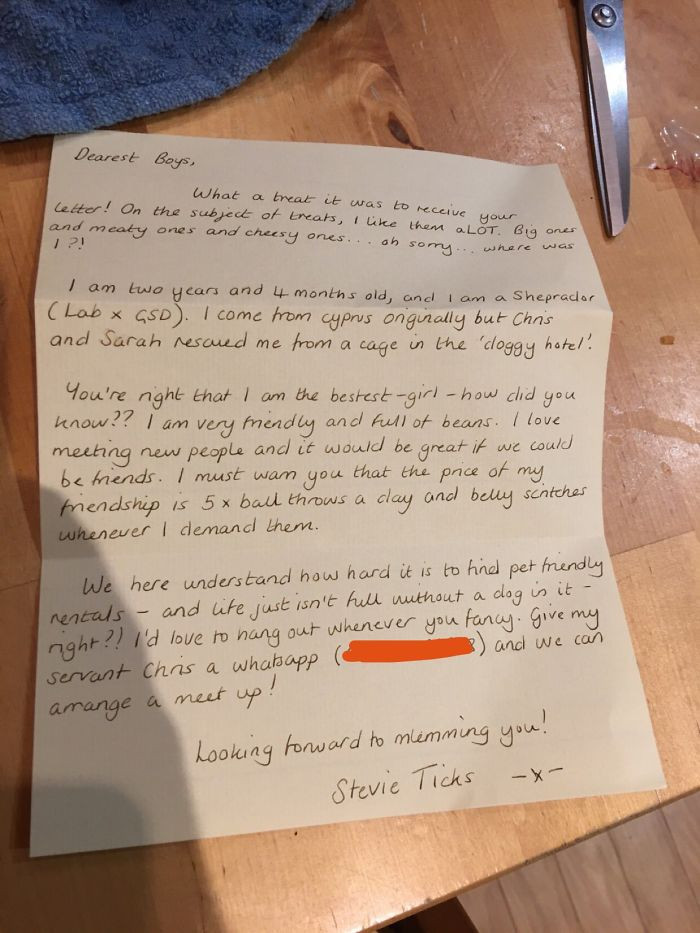 Stevie has met up the boys twice already. It didn't take long before Stevie played with the boys at the park. They got so well, and Stevie was super friendly (as she always is).

Stevie Ticks is a 2.5-year-old sheprador and originally came from Cyprus. Sadly, she was hit by a car and had a surgery. She was then flown to a shelter in the UK where she was rescued by her owners, Chris and Sarah.

Stevie meets the four guys for the first time 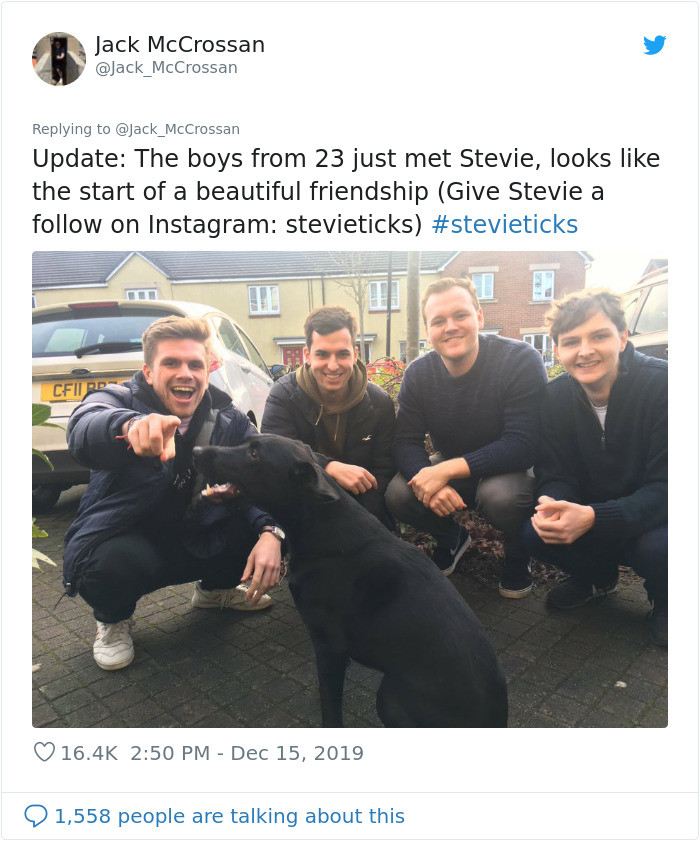 Owner Chris reveals they understand that owning a dog while renting can be difficult, as some landlords don't allow pets inside the establishment.

“So if we can share the love a dog gives all the time we should try to follow in her footsteps. We’ve been amazed at the positive response we’ve received from around the world. It’s inspired other people to make contact with their neighbors and share their dogs," Chris said in his interview with Bored Panda.

Look how happy they all are 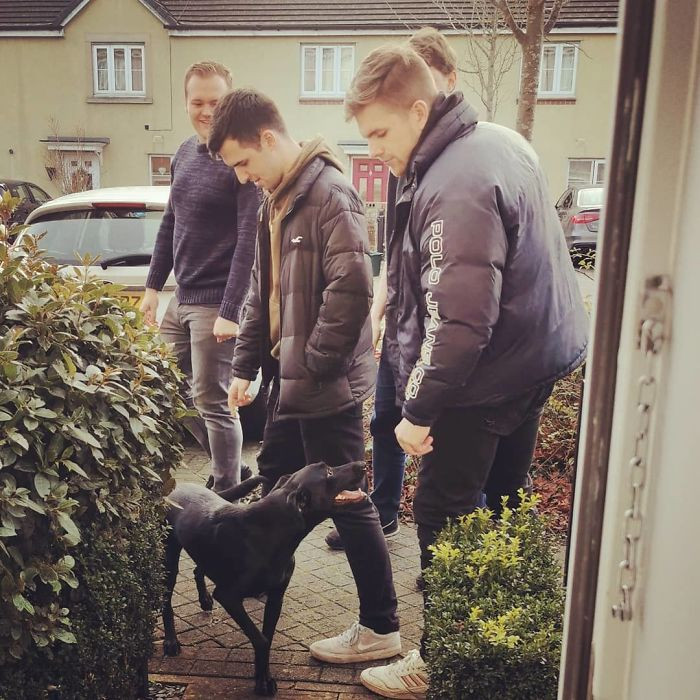 “Every time she goes out in the garden in the morning she ‘sings’ to the cats and birds out there. That was partly the inspiration behind her name, as well as the fact that she had tics all over her when we rescued her!” 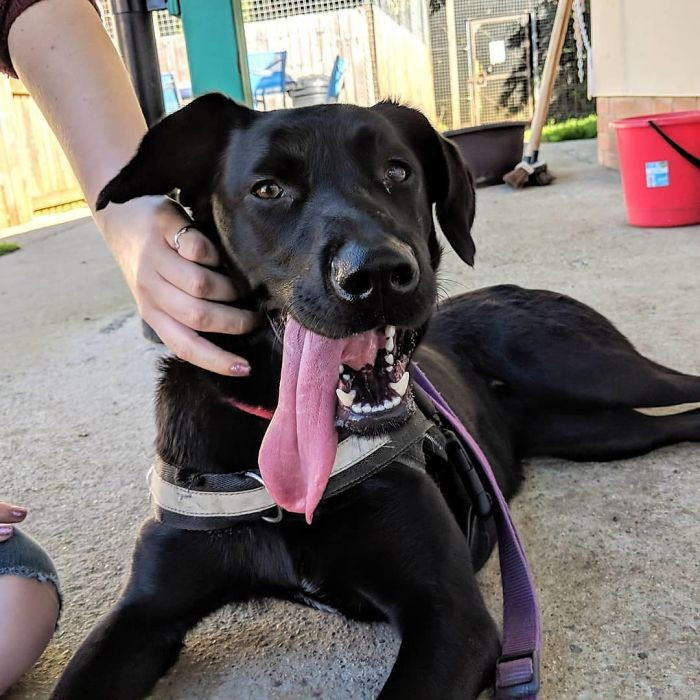 “Stevie is a very inquisitive pooch. She loves hanging her head out the window and checking out all the people walking past: that’s how she drew attention to the boys!" Sarah added.

You can check more of Stevie Ticks adorable portrait on her Instagram! 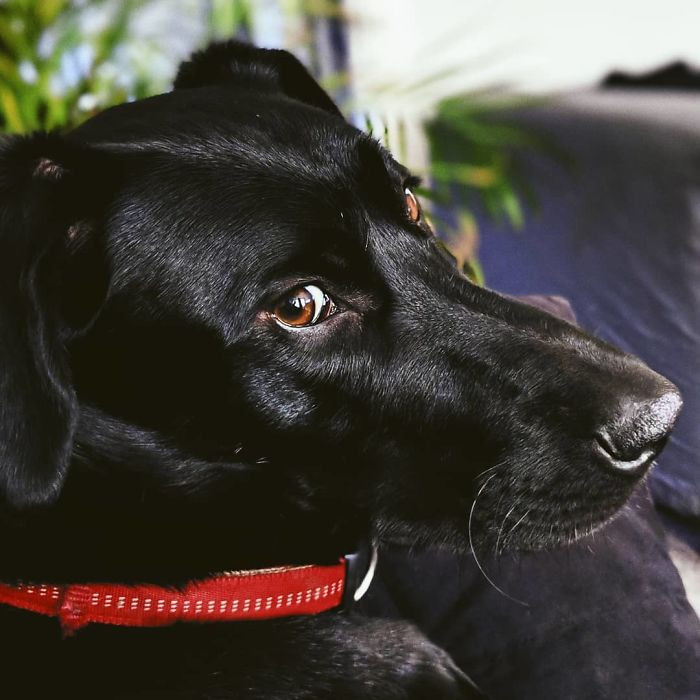 Look how beautiful this doggo is! No doubt why the four boys fell in love with this beauty 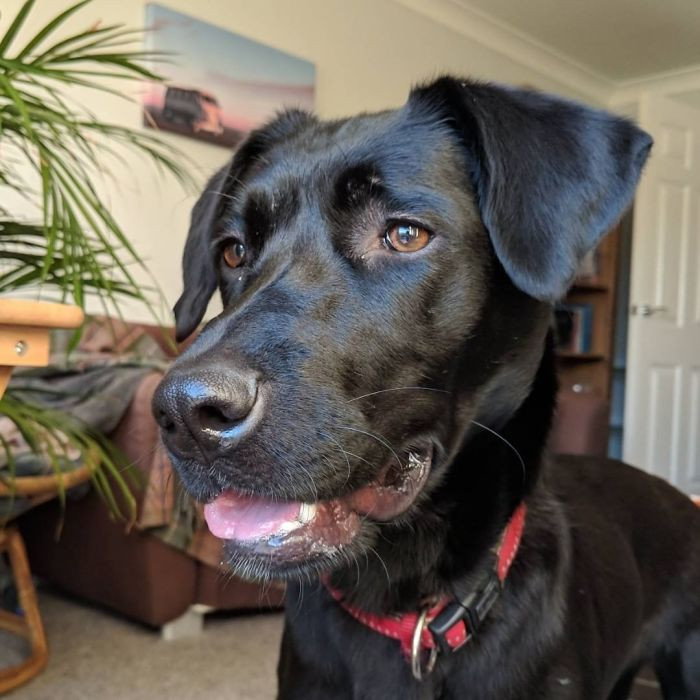 “We were ecstatic at the response and couldn’t wait to walk her,” Jack said. “Once we saw the paw print on the envelope we knew it was good news!” They were not wrong!

“She is very energetic, puppy-like and friendly! We got to take her for a walk and she wouldn’t stop running. We’ve all had a mixture of pets from cats and dogs to hamsters, fish and guinea pigs.” 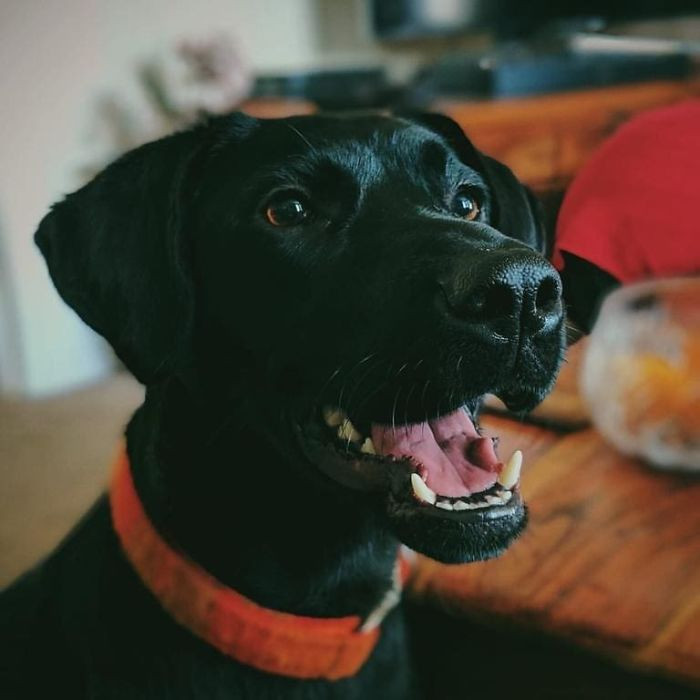 The internet fell in love with this heart-warming story!

The boys got this grandma crying... and we're crying too! 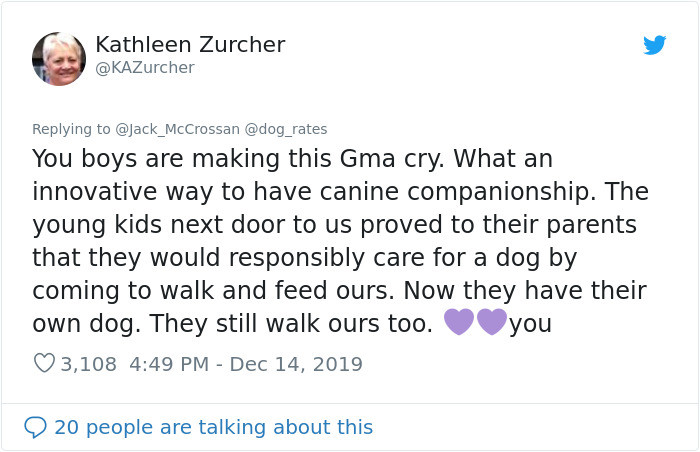 Playing with doggos is ALWAYS the best 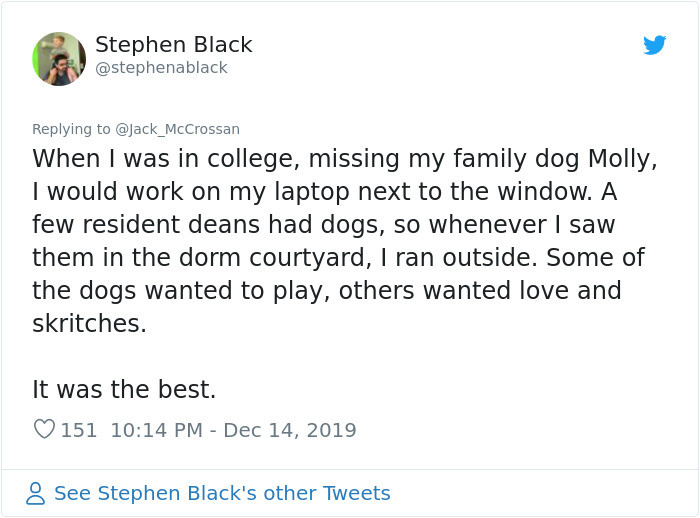 Apparently, all doggos are full of beans

And fantastic traits, too!

"This is the kind of story we need right now"