When it comes to naming human offspring, the average person would probably tell you it's not the world's easiest task. Although, compared to what it's like actually raising said offspring, it's a total walk in the park.

On one hand, choosing a name for your child is very important. You want a respectable name they can carry with them throughout life and for many people they want a hint of originality sprinkled on as well.

Additionally, you have to consider potential nicknames, bullying, and whether or not their initials will spell out A-S-S or P-O-O or whatever makes 12-year old kids giggle these days. Let's also not disregard how easy it is to pronounce a name or whether the name will be perceived as professional later in life.

Some people, of course, are so lackluster (or dimwitted) when it comes to naming their children, complete strangers have to intervene to ensure someone doesn't walk around the rest of their life named Vagina or Linoleum (if you think I'm kidding, I'm not, nurses and midwives have saved many children from fates such as these.)

For one majestic Reddit user, choosing a name for her cat managed to cause a quiet controversy in her family and Reddit users butted heads to high hell and back trying to decide who was the asshole in this peculiar situation.

In the subreddit AITA users can pose a simple question with some information and allow the millions of Redditors online a chance to chime in and weigh an unofficial-official verdict.

This Reddit user wants to know if she's the asshole for naming her cat something her sister intended for a baby. Of course, as is often true with AITA, it's not black and white. 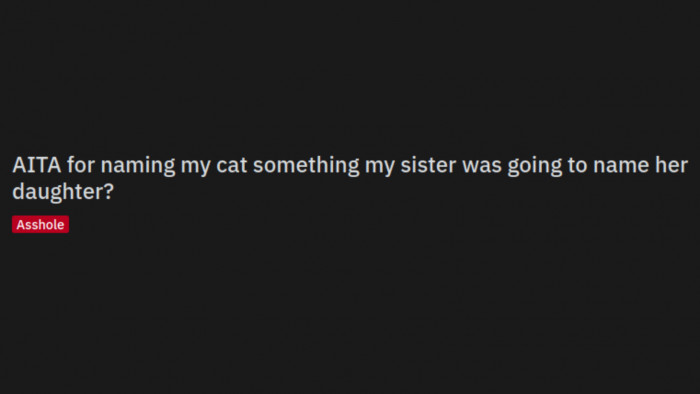 OP's sister has had a bit of a journey to achieving her parental dreams.

She didn't use the name Sandra, or Sandy, but it was in her top 3 choices for a girl.

They had a boy, time moved on, but someone didn't.

On one hand, OP didn't even remember the connection. On the other hand, she really likes the name Sandy for the cat.

As it turns out, conversations like this are nothing new. People have dunked it out over a perceived exclusive accesses and use to a name more times than any of us would ever even want to count.

Honestly, in the desperation to be as original as possible sometimes people go way too far as it is, too. Who could forget when Allison Czarnecki, a mom from Utah turned to Twitter one evening to share some of the most absurd and ridiculous names she found in her child's yearbook.

As with many things in the AITA subreddit, the comments were divisive and mind-boggling. Somehow OP ended up dubbed The Asshole, but the voting system appears to be chaotic under these circumstances.

Do you care about the relationship with your sister is a painful question.

How much power do fertility issues wield? In this week's episode of AITA: too much. 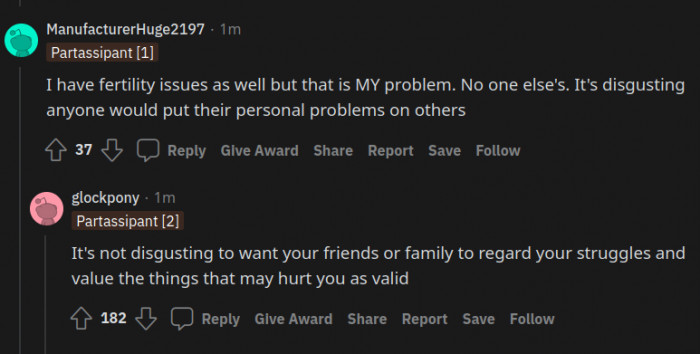 Okay, any cat owner will tell you this one is super accurate.

Wouldn't it be nice to be the center of the universe? Fat chance.

Let's not even discuss how many black cats are named Loki, Salem, or Night.

According to the How Many of Me webiste: There are 1,053,836 people in the U.S. with the first name Sandra. Statistically the 43rd most popular first name.

This Redditor is spitting straight facts. 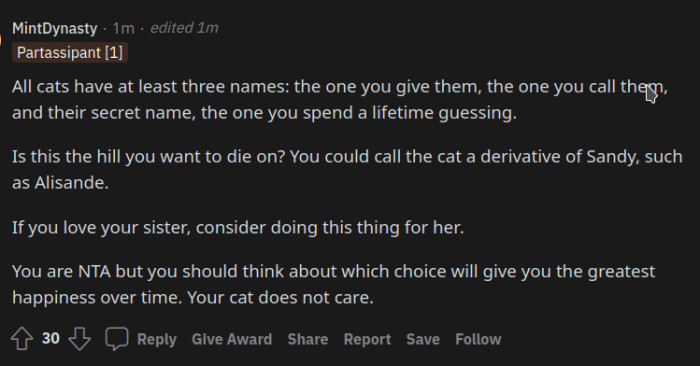 Quite the valid point, will this be a boy cat named Sandy? Pawsibly.

What right do any of us have?

Play a game of chicken but with names. 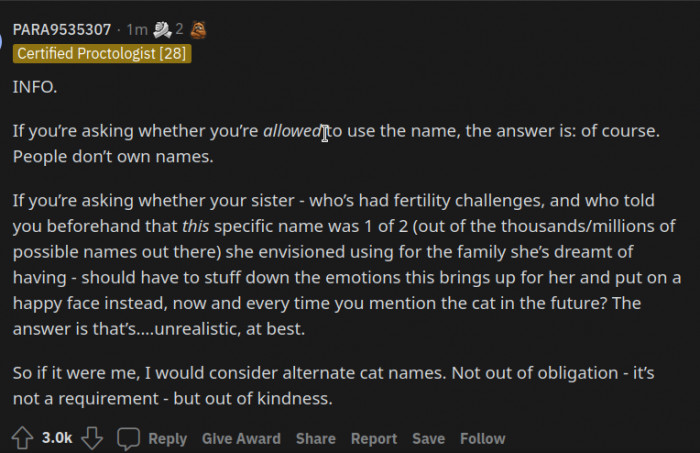 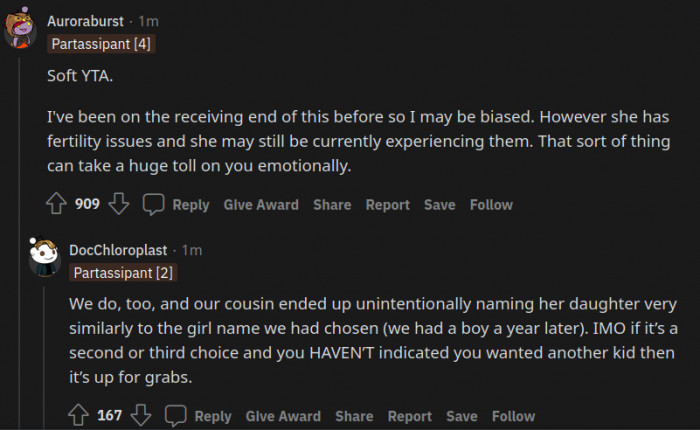 What is the name Sandy worth to OP? Who knows?

Let's get George Forman up in this family. 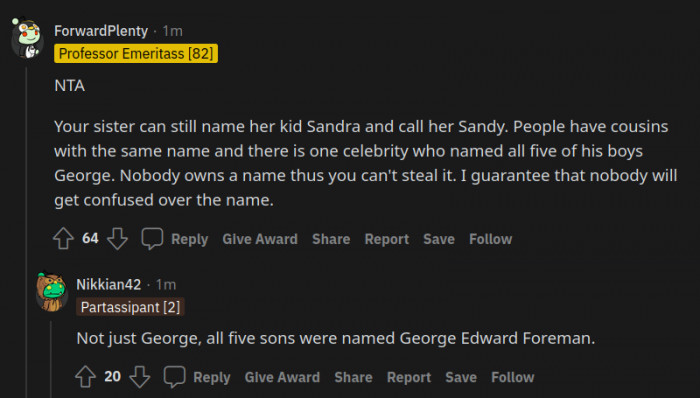 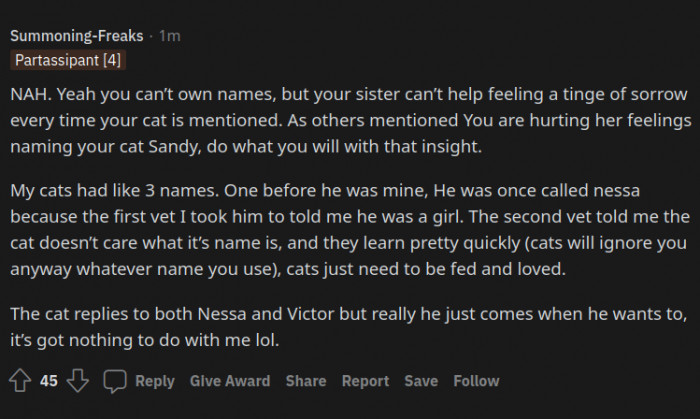 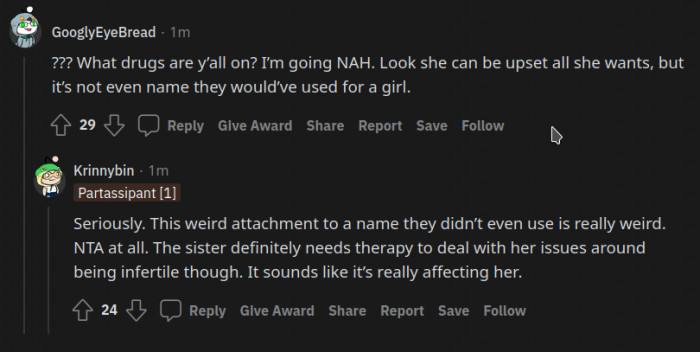 In conclusion, a lot of valid points were made in favor of both Aunty OP and her sister. Respectably, that probably adds a layer of "what is the right thing to do" to an already head-scratching situation.

Is this a hill worth dying on? You'll have to let us know in the comments what your verdict is in this cat-astrophic AITA thread.