17 Animals Who Pretended To Be Humans And Actually Nailed It

Have you ever come across an animal who's pretending to be human? I don't know about you, but I have and most of them are cats and dogs.

Although I have come across a cow who thinks she's a puppy, I've known many cats who think they're humans in disguise.

I've also come across humans who think they're animals, but that's a story for another time. Anyhow, this article is about animals pretending to be humans and some of them have nailed the whole thing!

You see, animals are smart creatures who shouldn't be taken for granted. Sure we've all learned that humans are the smartest creatures on the planet, we should take that fact with a truckload of salt.

If humans were really the smartest, wouldn't they know not to abuse animals or chop down trees, or waste food? But humans continue to do this, and many more 'unsmart' things that animals don't do.

I don't know about you, but I've not come across a cruel animal. Sure, big animals can hurt us, but they don't come to our homes and hurt us.

Alligators and crocodiles are a different story. They're a bit weird, if you agree.

Either way, here are some animals pretending to be humans and nailing the act like a boss!

1. This pup waits for the invisible door to open before he can enter the house. What a boss.

He constantly thinks the screen door is closed, so we have to pretend to open it for him to come inside pic.twitter.com/oy6Hi8TsII

2. This dog pretending to be a mad office boss. 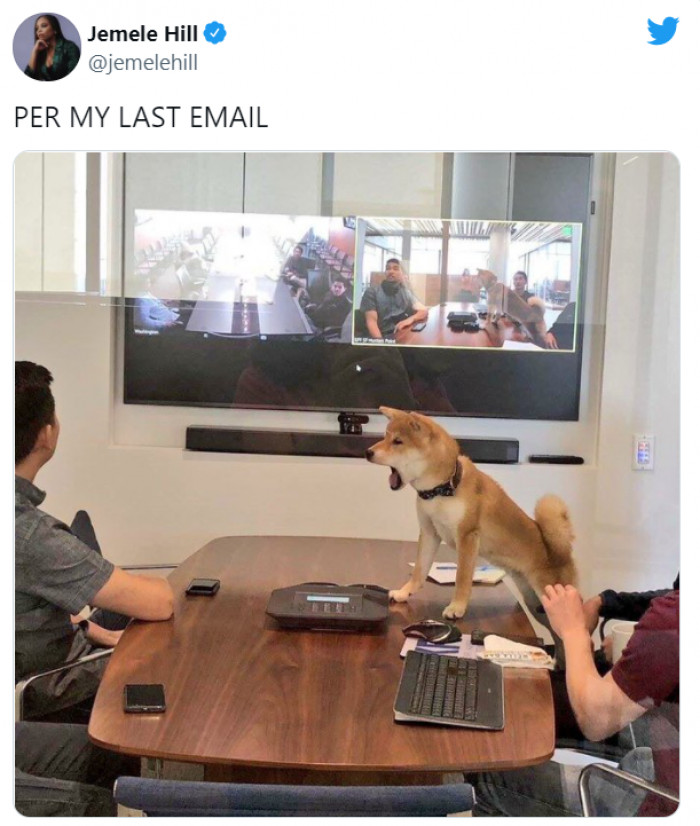 3. When your dog dances better than you...

My mom said my dog dances better than me and i agree pic.twitter.com/b8QqoWmmfO

4. This dog is a boss when it comes to operating the refrigerator's ice machine.

5. Mimicking a dog looks simple, but it isn't. Being a dog isn't easy.

Y’all ever tried to mimick a dog?? pic.twitter.com/v6DT0tYFAw

6. This orangutan is busy admiring a human baby much like how humans admire babies.

7. This corgi is a master at being human.

8. This dog is smarter than most humans. Who else agrees?

9. Snow leopard moms will fake being surprised only to amuse her young.

10. These geese are smarter than most humans.

11. When there's a will, there's a way. This dog's parkour course to French fries is jaw-dropping.

12. This dog is all of us when we hear our favorite music.

13. This cat is all of us every single time.

14. Even fish have pesky neighbors. Poor clown fish is stuck in between.

15. The constant eye contact even after you know your actions will destroy something or someone... epic.

16. When two groups of penguins meet, they exchange conversations and part ways... like most humans.

I can't get over that one penguin who goes off with the wrong group, so his friend hops over to get him. What a muppet. https://t.co/STfTH6XQ9B

People view animals differently, but honestly speaking, there's not much difference between an animal and a human. Like animals, humans too are known as creatures.

Haven't you heard or seen how some people act like animals? We've seen today that animals act like humans, so technically speaking, we probably complement each other!

There's no bigger truth than that.