Illustrator Who Made Us Cry With Her Comics That Speak About Animal Abuse Just Published Another Tearjerker, And It's Even Sadder Than The Last One

Jenny Jinya is a freelance graphic designer and Digital Media student from Germany, and a creator of popular animals-meet-Death comics. She has amassed hundreds of thousand followers on her social accounts. It may sound alarming, but it’s not.

Her comics strongly support animal rights, evoke compassion in all of us, and make us think twice about many things we took for granted. This artist’s version of Death is not a bad character but an empathetic shepherd, guiding the poor animals to their new home.

The illustration series began with “Good Boy” and “Black Cat” and quickly expanded to bunnies and elephants. Unfortunately, humans are an endless supply of inspiration and material for Jenny.

This time she decided to direct our attention to abused animals we frequently overlook when talking about animal maltreatment - parrots. 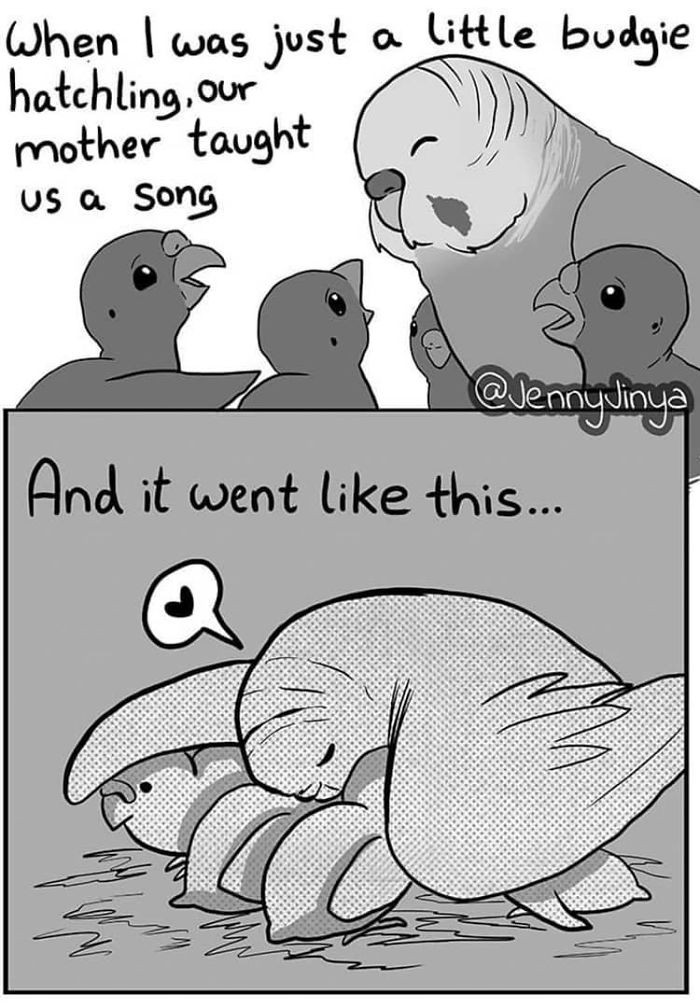 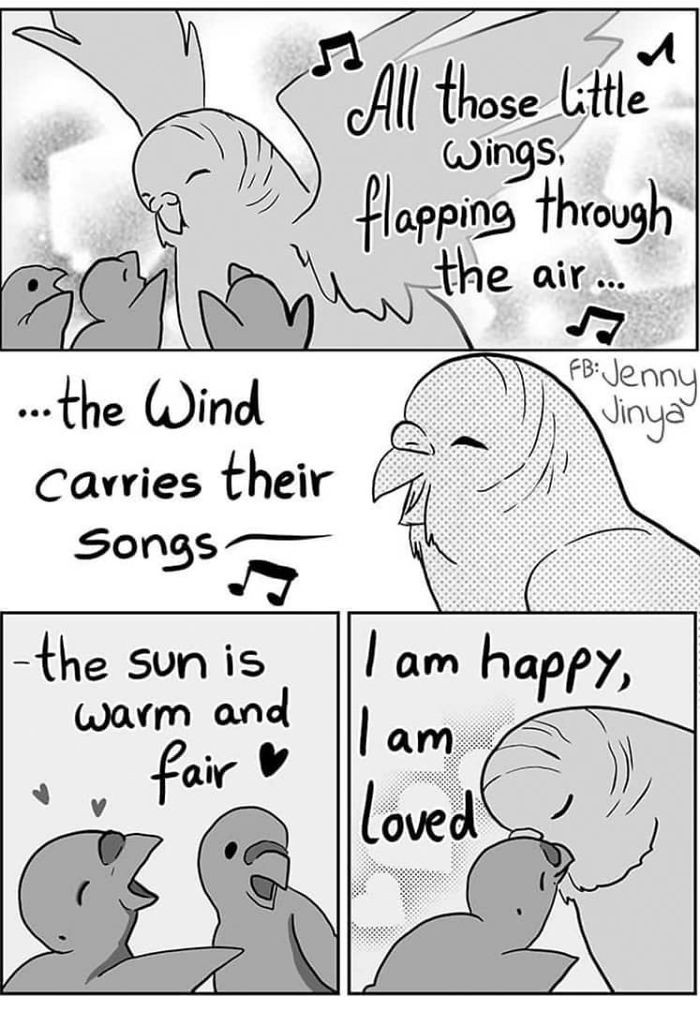 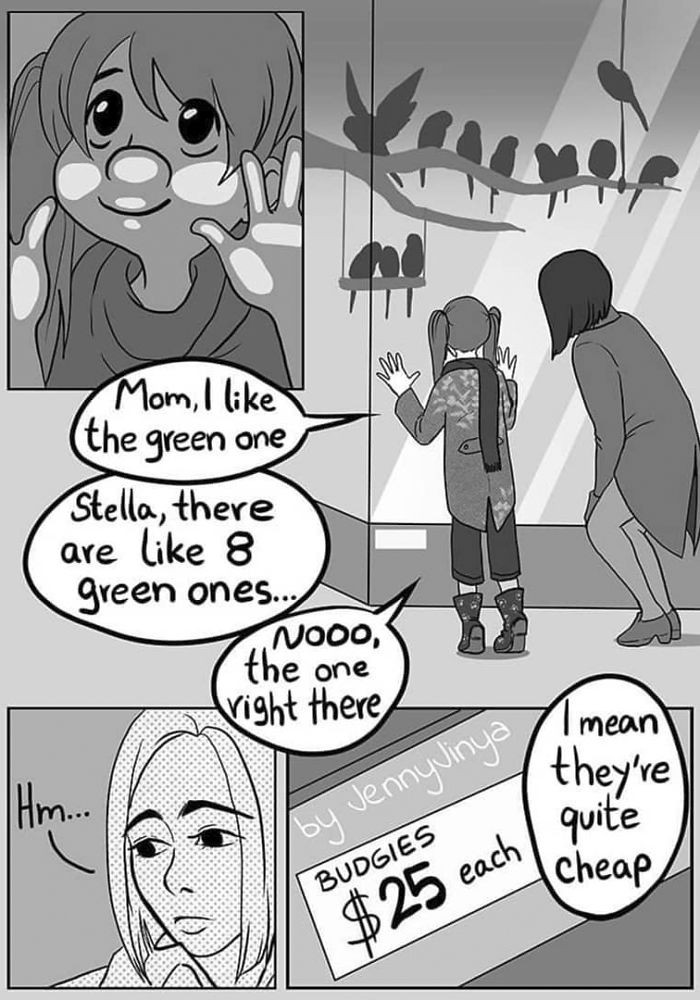 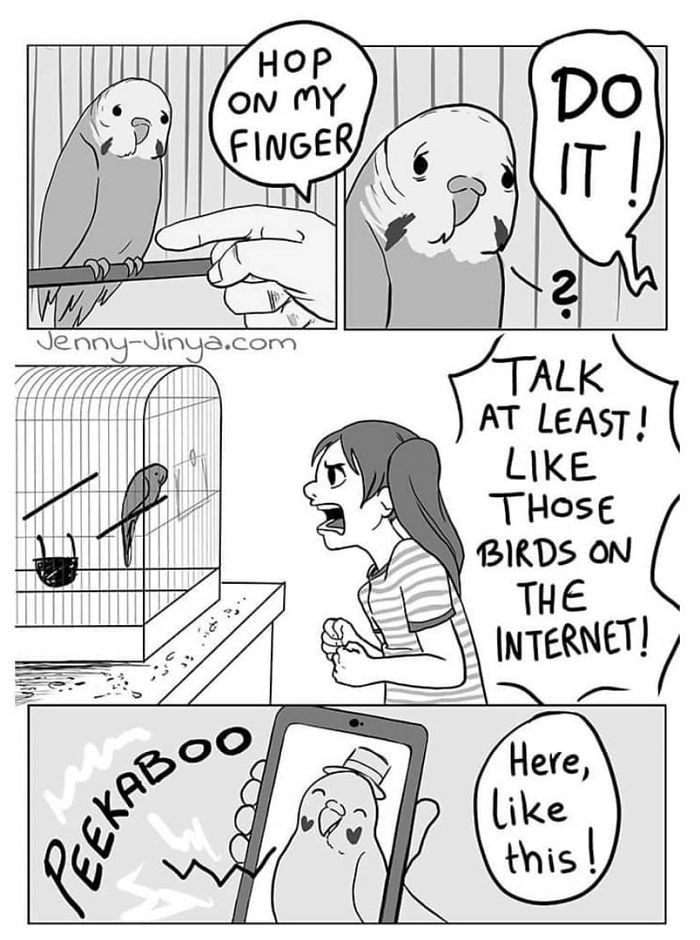 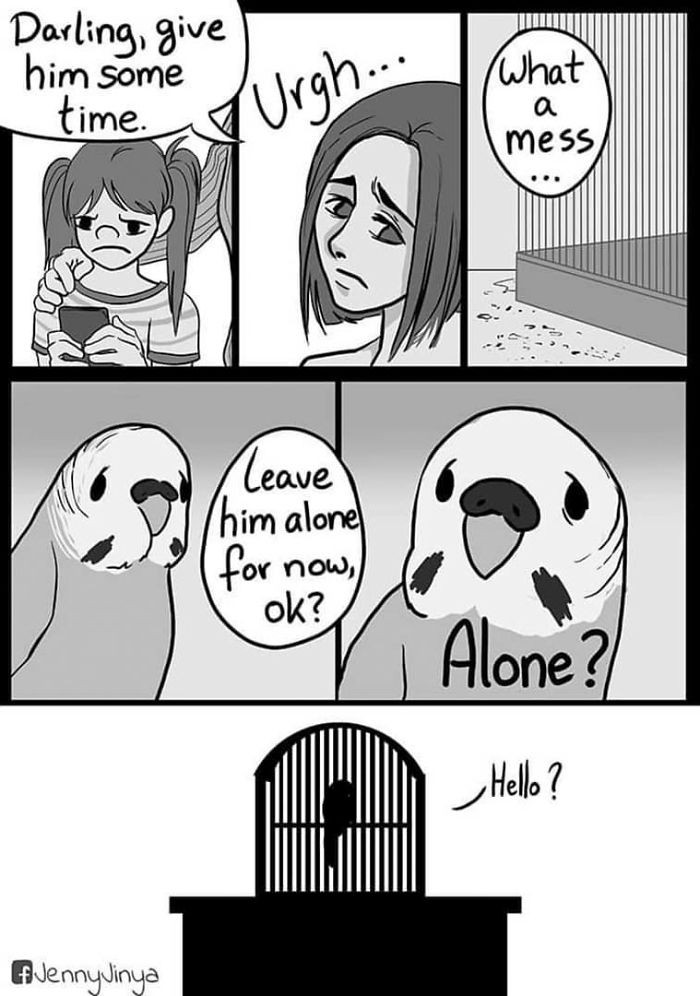 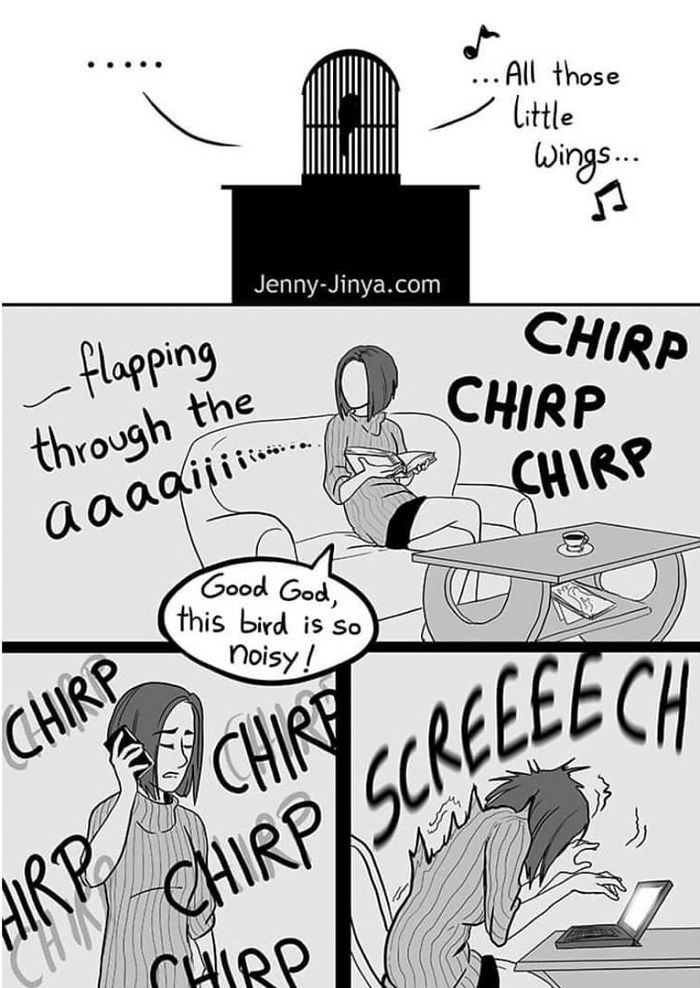 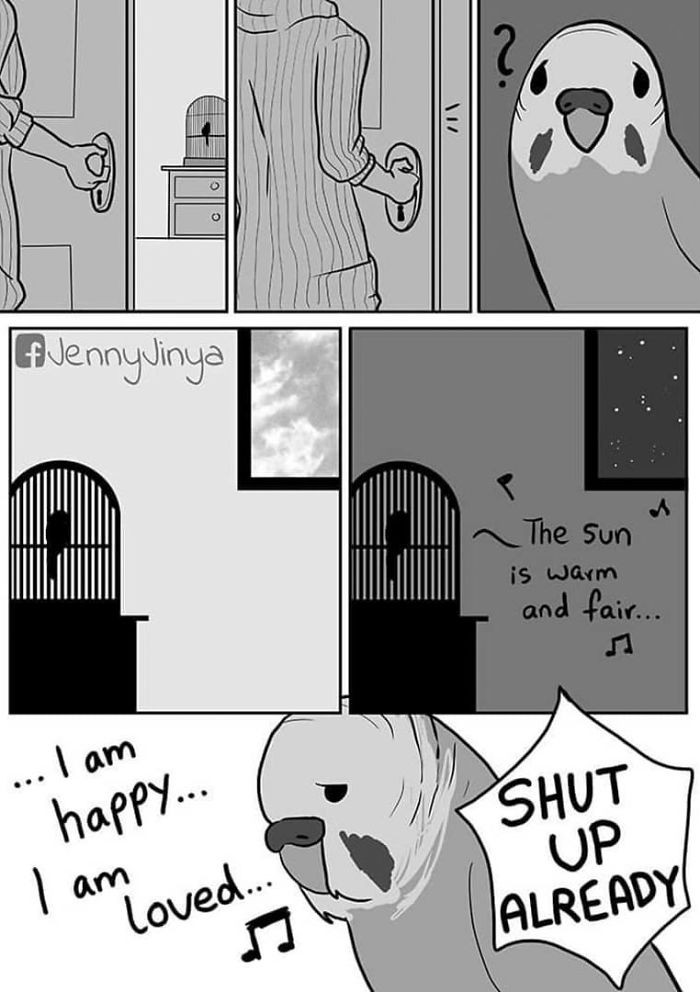 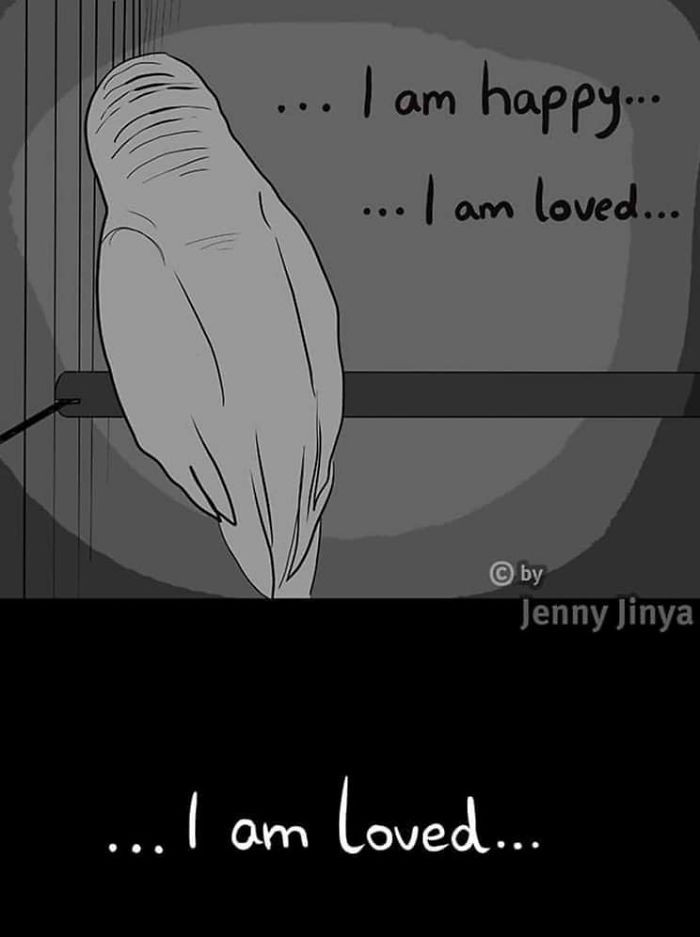 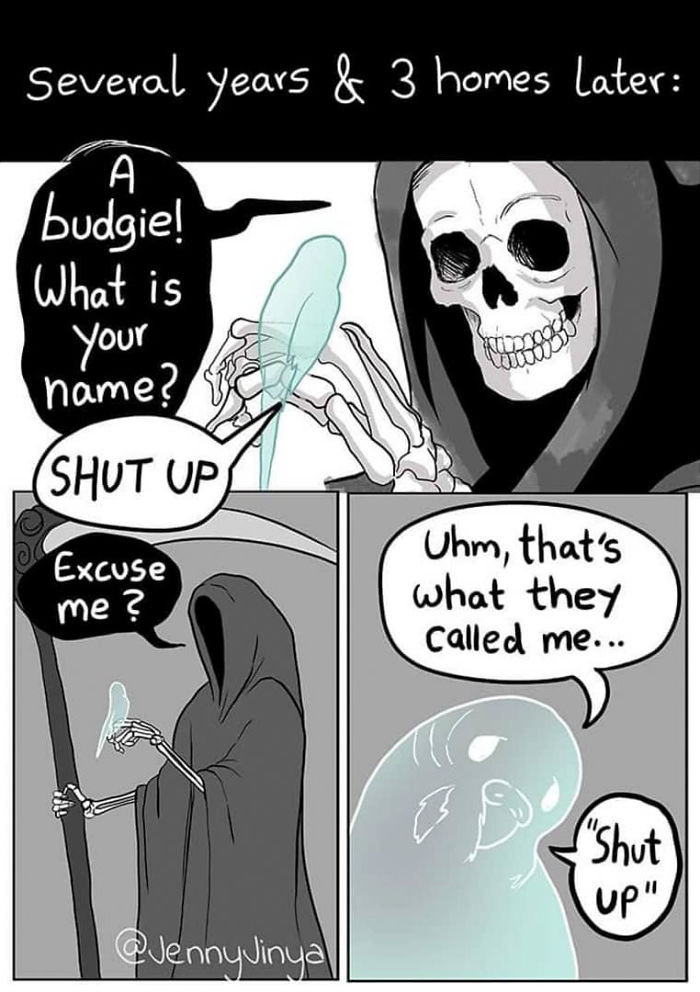 Jenny believes there are several reasons why people buy so-called pocket pets for their kids. “Just like hamsters and fish, birds are thought to be small animals that do not require much care.

However, when these little creatures suddenly start to make a mess, people realize that they have not done enough research,” she says.

“Parrots like budgerigars are small, pretty, and also quite inexpensive. Often, it probably is simply underestimated how wild and complex these animals are.

We are talking about exotic birds that are inherently wild. These birds are not decoration, they are loud, they want to fly, they need attention. You can’t just put them next to grandma’s flower pot and ignore them,” Jenny concluded.

The artist said this when she published the comic: 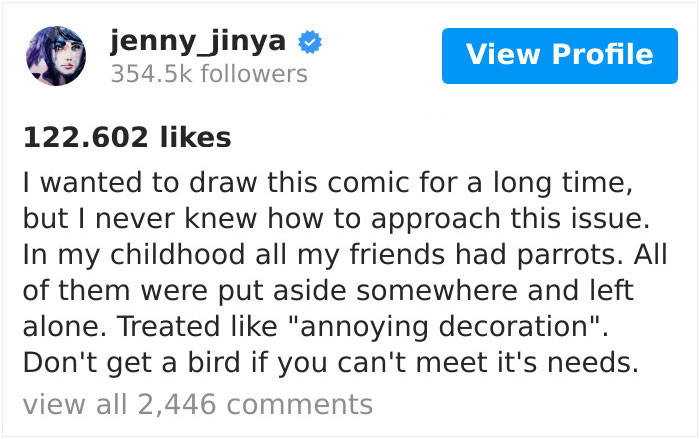 In Defense of Animals, an International animal protection organization, says that parrots are amusing, beautiful; they are intelligent, can provide companionship, and learn tricks. But the group also says that the parrots are one of the most numerous abandoned pets.

“Even if captive-bred, they possess the same wild traits as their wild-born cousins who live in the jungles and rainforests. The parrots’ loud vocalizations help them communicate with mates and neighboring flocks in the distance.

Even the smallest parrots like the little budgerigar (commonly called budgie or parakeet) have been known to be too loud and nerve-wracking for some people,” they say on their official website.

Jenny emphasized that pets are great and valuable to children. “That being said, parents should be aware that a child may not always be able to meet all the requirements of an animal.

One should not leave this responsibility completely to the child and before each purchase, one should inform oneself sufficiently about what one is getting involved with,” she added.

And here is how the internet community reacted: 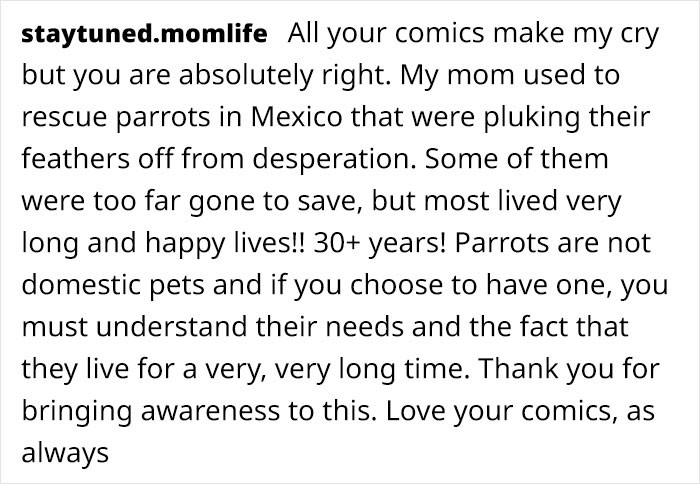