Gerrard Gethings is a famed photographer who is no stranger to the idea that sometimes animals and humans bare a striking resemblance. It wasn't that long ago that the British photographer asked, "do you look like your dog?"

Now he's back at it with an even more fascinating and fun project that poses the question, "do you look like your cat?" Who would think that humans and cats could look so much alike!?

Well, Gethings did, apparently, and he wasn't wrong. The latest doppleganger project has gone totally viral and even a memory card game has been created from the funny and adorable series! 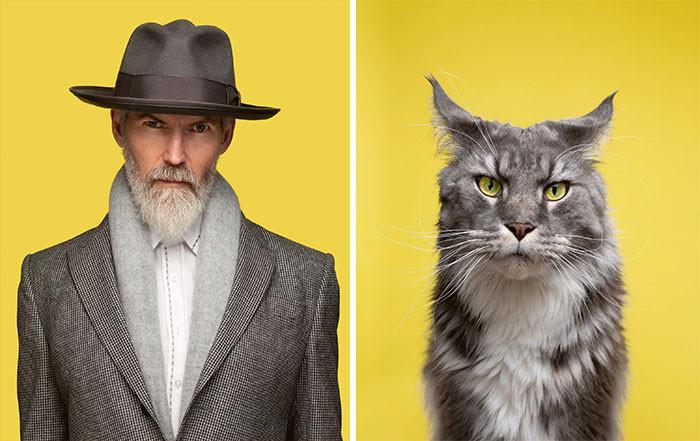 Albert is an Exotic Longhair, in case your were curious.

“I would say that it is necessary to be extremely patient to photograph animals. It is always tricky and the animals themselves will never show any interest in your work." 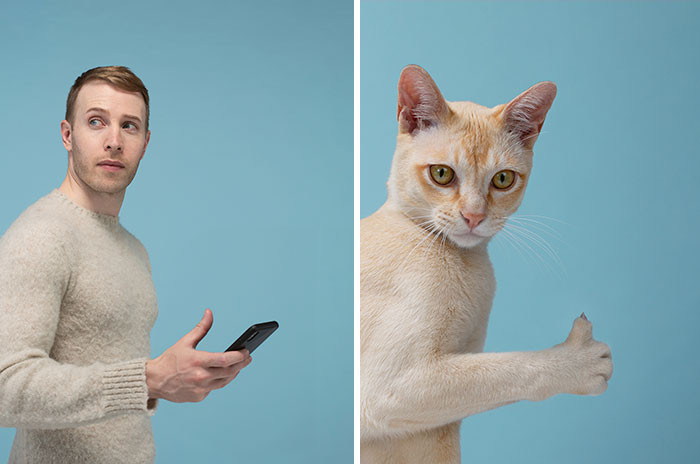 In an interview with Bored Panda, Gethings said:

"I had previously made a series of work based on people who look like dogs. It was received really well and I needed another project that I thought would be equally, if not even more engaging. Cats seemed the most accessible choice, but they are infinitely more difficult to photograph than dogs."

Hero is a Moggy. A Moggy (or Moggie) is a British slang term endearingly bestowed upon non-Pedigree cats. 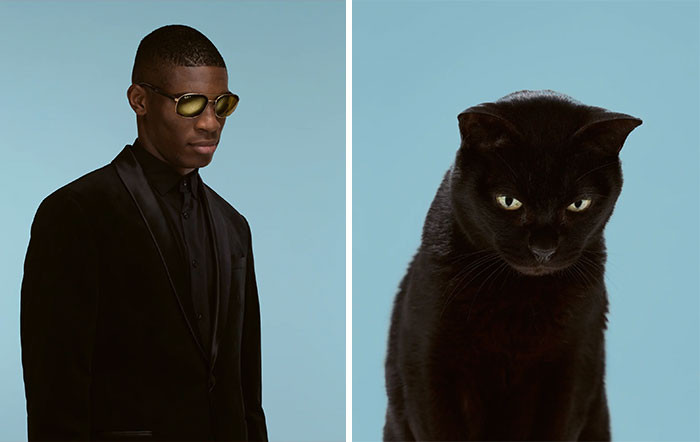 Speaking on his success, Gethings said what we all know to be true: “Cats needed to be tricked into taking part.” 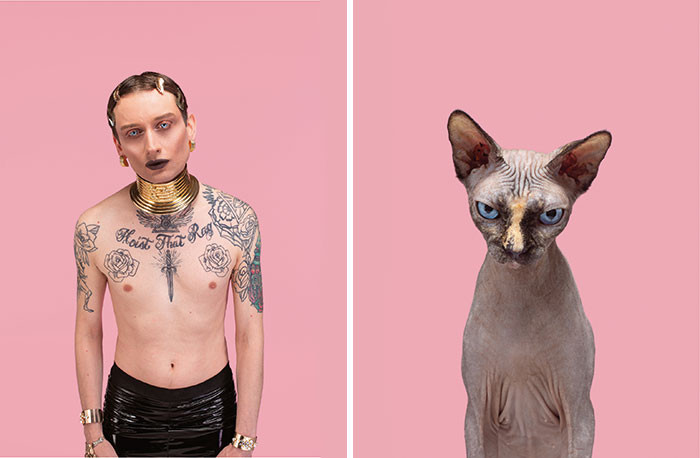 Buttons is a Scottish Fold, so cute! 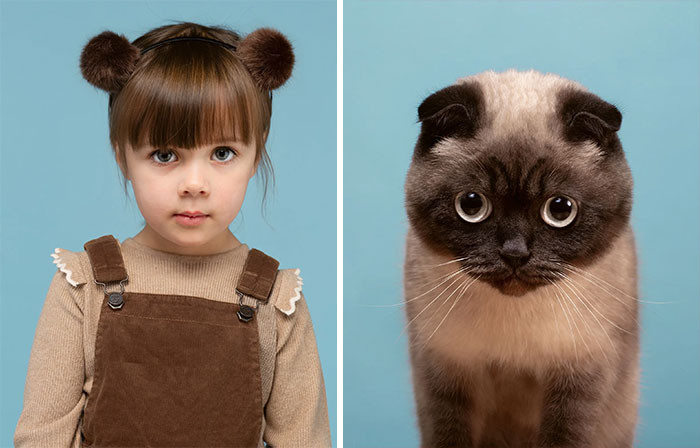 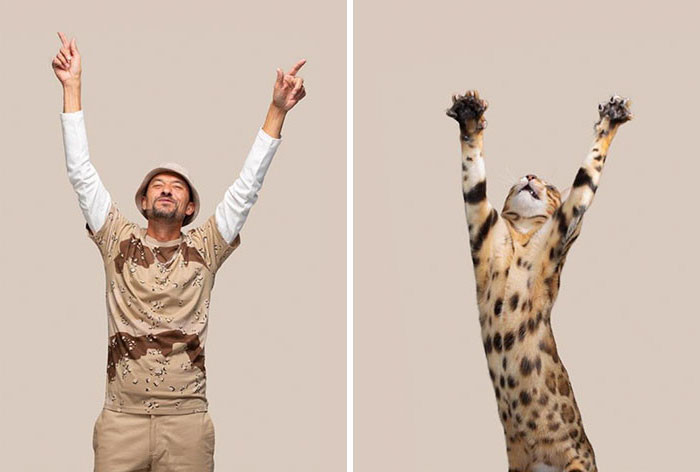 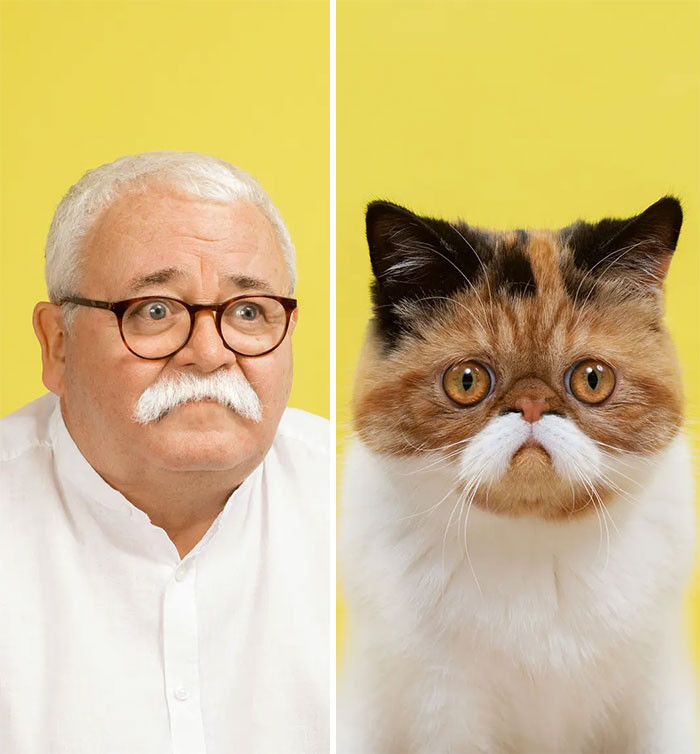 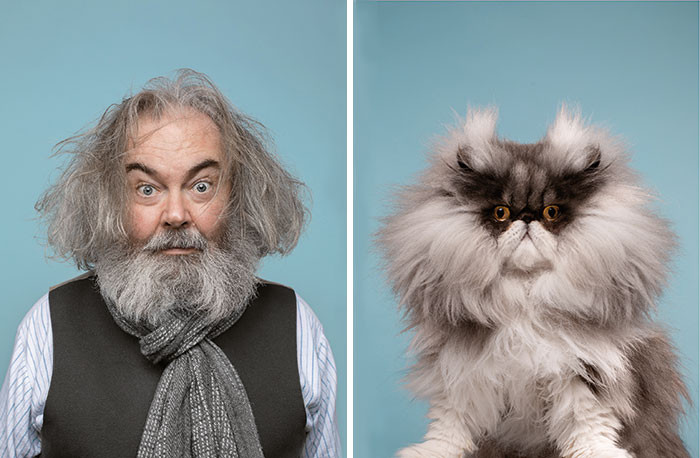 While you may be wondering how likely it is to find humans and cats who look so similar, you may find it comforting to know that these dynamic duos are not wild coincidences. There was actually an extensive casting process and the models were hand-picked for the series. 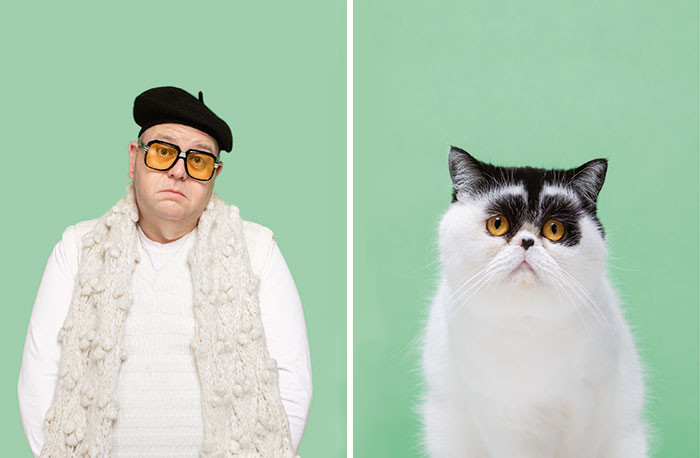 Gethings said this project presented quite the challenge:

“It is also something that people will never have seen. It was really important for me to create something new.”

“Even finding cats with enough variation to keep the series interesting was difficult and I covered most of England to shoot them. Unlike the dogs, simply finding the cats wasn't enough, I then had to convince them to take part.

On more than one occasion I drove for hours, set up my equipment, and then the cat refused to play ball. I simply had to pack up and go home feeling very deflated.”

Angelique is a Khao Manee, a rare breed of cat sometimes known as the "diamond eye cat." 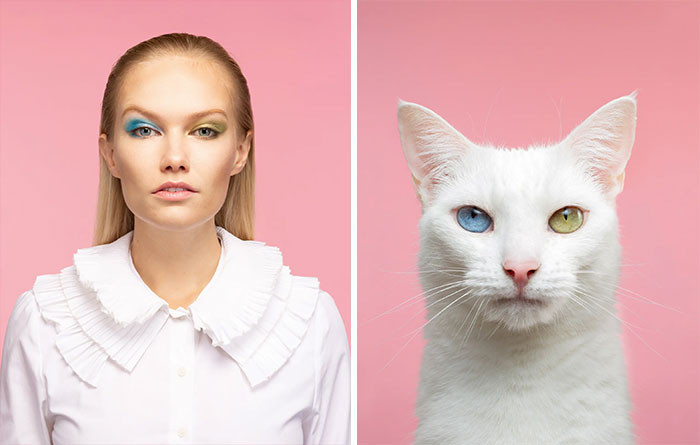 Gethings mused in his interview about the twisted sense of humor the cats he photographed seemed to have:

“[The cats] would often sit beautifully on the posing table as I set up the lights and then, as soon as the camera came out they were off, never to be seen again.

Another huge challenge was that cats don't have the same amount of facial expressions as dogs. They tend to look either startled, suspicious, or angry. They also don't react to food like dogs, who will do absolutely anything for a piece of cheese.”

He also added to his advice:

“You need the right equipment and you need to know where to put it. Animals lose interest very quickly during a shoot so there is no time to keep readjusting. Practice on the family pet. This is the best way to get started." 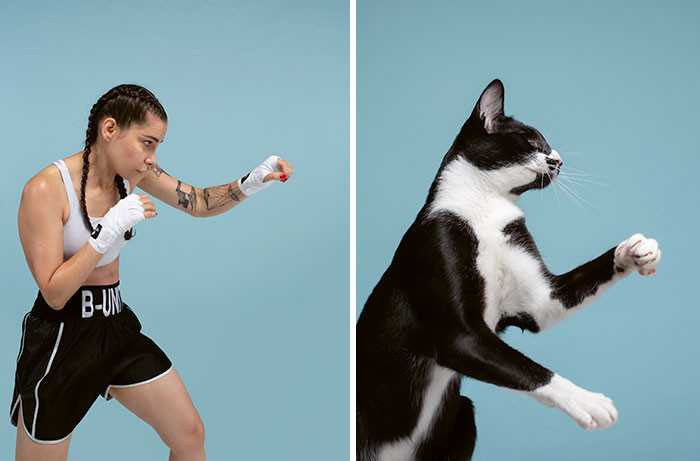 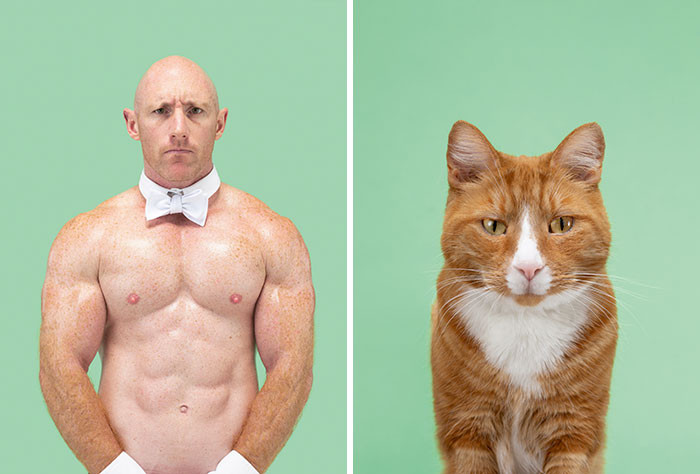 Buttercup is a Cream Persian, but she's putting on her best wet and disgruntled for the photo-shoot. 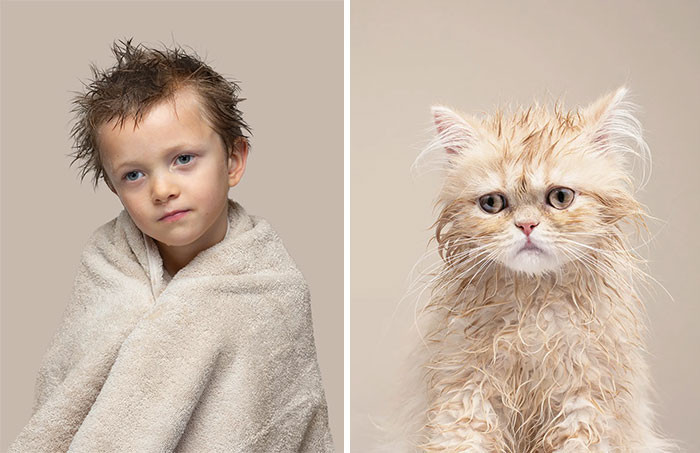 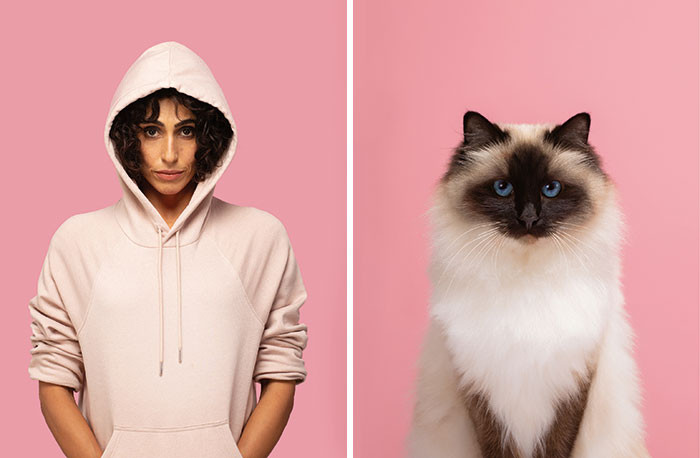 Gethings shared some of the tips and tricks he tried while navigating this incredible experience:

"I had to use more physical clues in this series. Many of the cats would enjoy playing with toys which led to some great body shapes: the boxing cat and the dancing cat for example. The main difference between cats and dogs seems to be that dogs are very willing to please you.

They are also greedy, which helps immensely. Cats on the other hand are quite suspicious of new things. They also have constant access to food, so are not driven by it in the same way dogs are.” 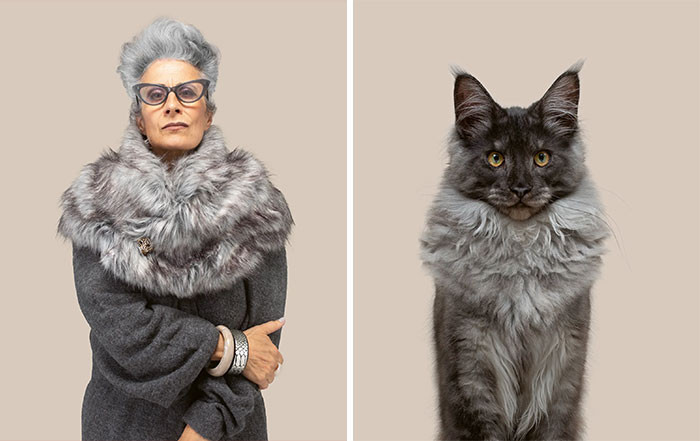 Hubert is an Abyssinian, a gorgeous cat often known for it's striking fur patterns but for this series? Quite the stink eye. 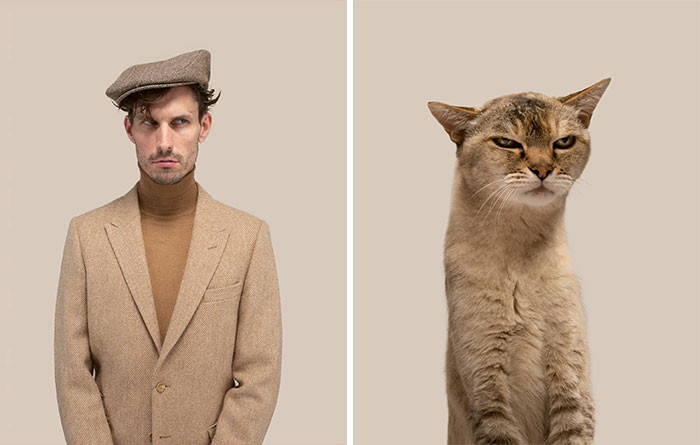