Crazy stories on Reddit are not new, but this one seems to take a couple of unexpected turns. We don't really think anything about it usually if we get scratched by a cat or dog if we're used to it.

You might think twice about that though after hearing about this story. A small harmless kitten scratch would turn out to be much more than just that.

Cat scratch fever seems to be something that people talk about but never have experienced or known anyone who has had it, but that's about to change. Who would've thought that this girl's mother's kitten would take her through this whirlwind of a trip after getting a little scratch from it?

This girl gets a small scratch from a new kitten and then goes on a trip to New Zealand with a stopover in Fiji, but the flight took a turn when she took sleeping pills for the flight but woke up in fear when she realized she'd been throwing up in her sleep for during the flight.

This probably sounds crazy, but we're going to give her all the credit and let her explain the story. Let's get into what exactly happened and why she threw up like that.

The rest of the story plus a little bit if edits for more context. 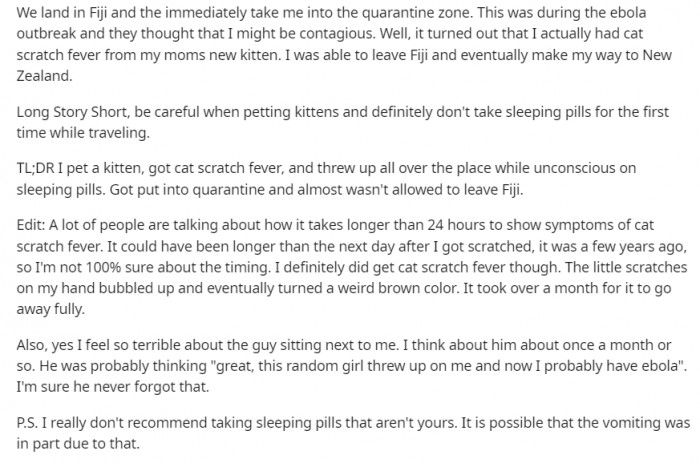 Definitely feel bad for the guy next to her.

This his how cat scratch fever is contracted.

The perspective of the guy next to OP.

Here's more puke stories for you.

Some people are saying it could've been more the sleeping pills than cat scratch fever when it comes to the vomiting.

Things are getting spicy in the comments.

Most people probably didn't even know cat scratch fever was a real thing. Who knew?

Wow. I mean who can really get used to getting thrown up on though.

The perspective of the guy next to her if he made a TIFU post.

Very true. Sleeping pills on an airplane might've been the fuck up.

Another commenter saying that the sleeping pills may have been a bad idea.

I mean they aren't wrong.

Was it really cat scratch fever?

Yet another throw up story. We're loving them.

Most are saying there isn't a vaccine for cat scratch fever.

Cat scratch fever is no joke and can cause health problems.

I don't think many of us were expecting the story to go quite like that. There were a lot of details that went into it and clearly from the comments people are torn.

They aren't sure what exactly caused her symptoms and a lot didn't even know cat scratch fever was a real thing. This did bring out a whole bunch of throw-up stories though, which were pretty fun.

Have you ever experienced anything like this? Let us know.