Some situations just need a little bit more context or clarity for people to completely understand what you're talking about. Sometimes, in a public space, you may find yourself saying something out loud that strangers would not understand.

Maybe it's an inside joke or a word that means something to you and your friends but nothing to the average person. Making yourself look crazy in public because you've said something that only you and maybe a friend would understand, can cause some confused looks among the public.

This person did just that when they were speaking to her husband and said Kat's but everyone thought they were saying cats. Do you see how this could be confusing?

Well, wait until you hear the whole story, because honestly, I'd probably look at her the same way her husband and everyone else did when they said this. Giving a little bit of context before saying something could keep people from looking at you like you're crazy.

On that note, let's get into this story and see just exactly what they said that made everyone in the pet store, including her husband, look at her like they had lost her mind. Spoiler alert, her husband eventually understood what they were trying to say.

Alright so here is the story and a bit of a backstory as well.

The bulk of the story and now we can see why this might have confused the others.

The embarrassment was real.

But were they Kat's? The best question and comment.

People seem to have enjoyed this story.

One of the best TIFU stories compared to some others.

I'm sure people thought they were absolutely crazy or seriously confused.

Commenters are honestly laughing at this and it's great.

The giggles have been brought on by this story.

Here is a similar story that has happened to someone else. OP isn't the only one.

Definitely when your brain short circuits. Brain fog. Blonde moment. Whatever you want to call it.

The laughter brought on by this post is amazing.

Another situation that is similar to OP's.

The partner should have played along.

The bystanders definitely probably thought that OP was crazy and definitely has a different version of the story.

Partner definitely could've played along and created a whole scene for the bystanders. 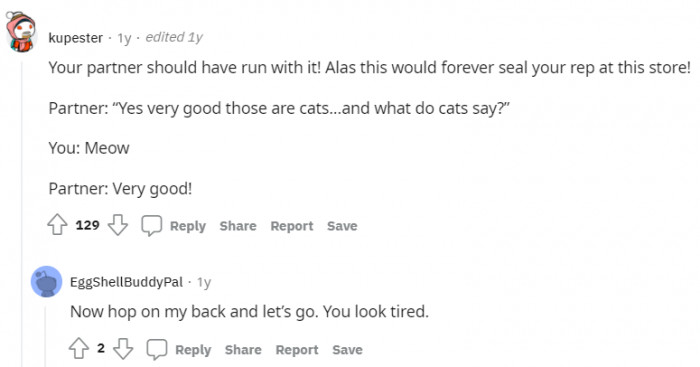 A different and creative perspective.

Yes, we hope the embarrassment passed!.

See. Context is important when saying things Infront of strangers.

"I understand your pain."

After reading this story I think it's safe to say that a lot of us might watch what we say in public without giving lots of context. This is a situation that is very common.

Also, as a bystander, I'd have to understand, from this story, that you don't always know what's going on and not to assume. Honestly, people could be talking about things that you have no idea about.

Have you ever had anything like this happen in your life?