Chameleons are awesome, mostly because of their relaxed attitude to awesomeness. They are so interesting with their camouflage and swiveling eyes, but they just don’t care about it… Well – we do.

A Reddit user named Chonky_lizard’s often shares pictures of his cousin’s chameleon, and this time he posted cute photos of Luna the chameleon holding LEGO props. We could see how this adorable reptile looks like holding swords, knives, coffee and lightsabers…

She looks like a cute little superhero who is battling crime, but still has the time for a refreshing cup of coffee. It seems like her owner, redditor Logan aka Loganteumbreon, and his cousin Chonky_lizard’s are never bored. 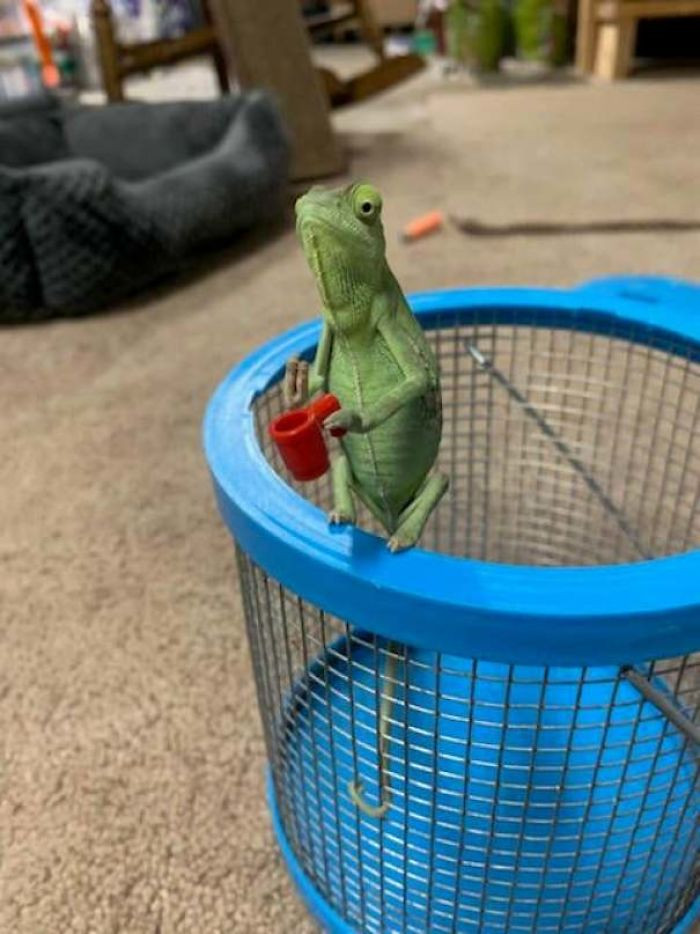 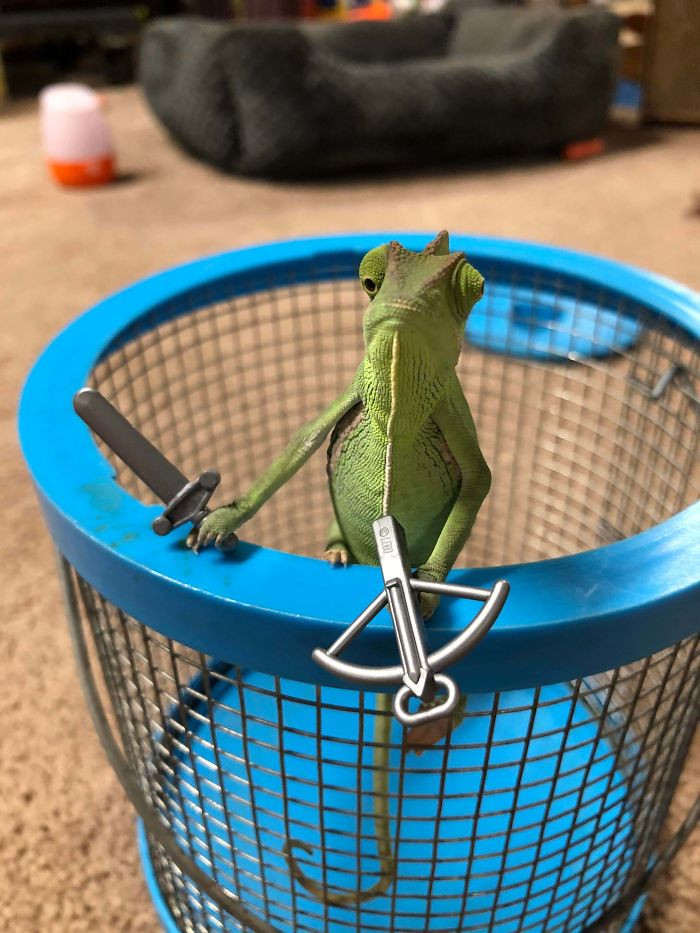 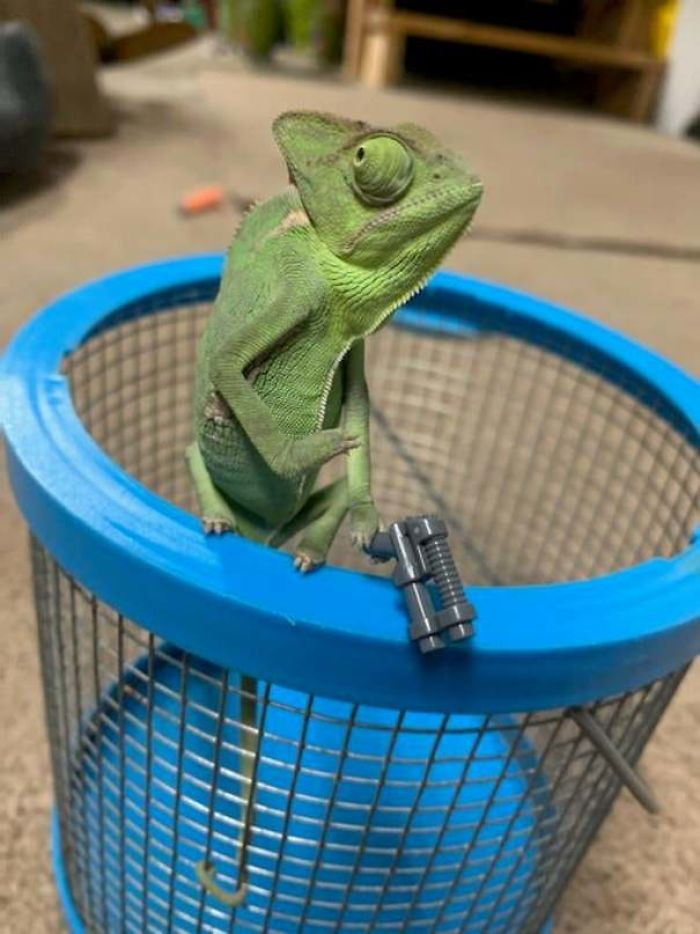 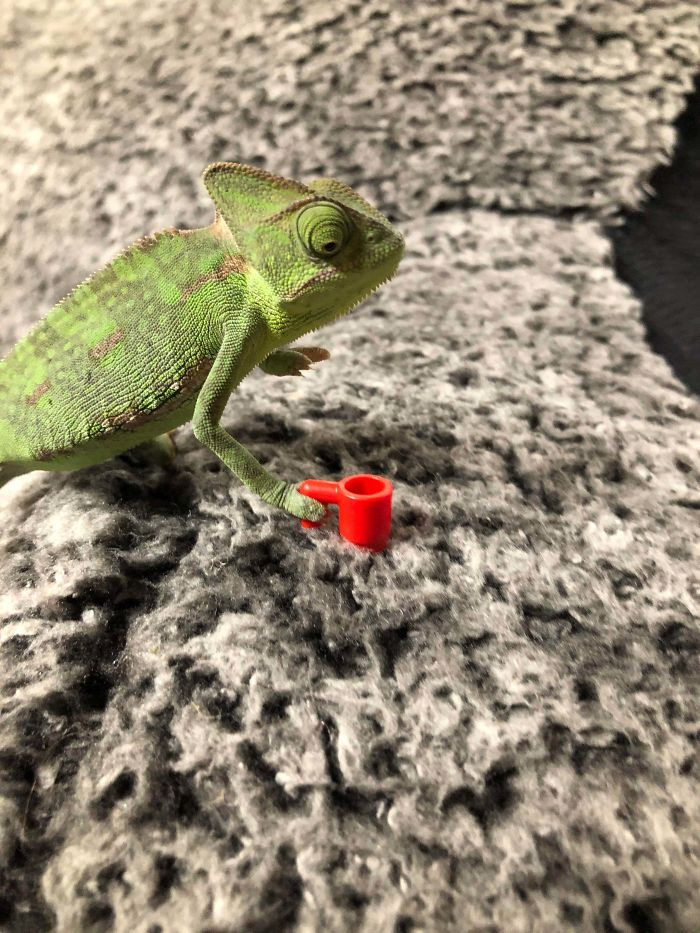 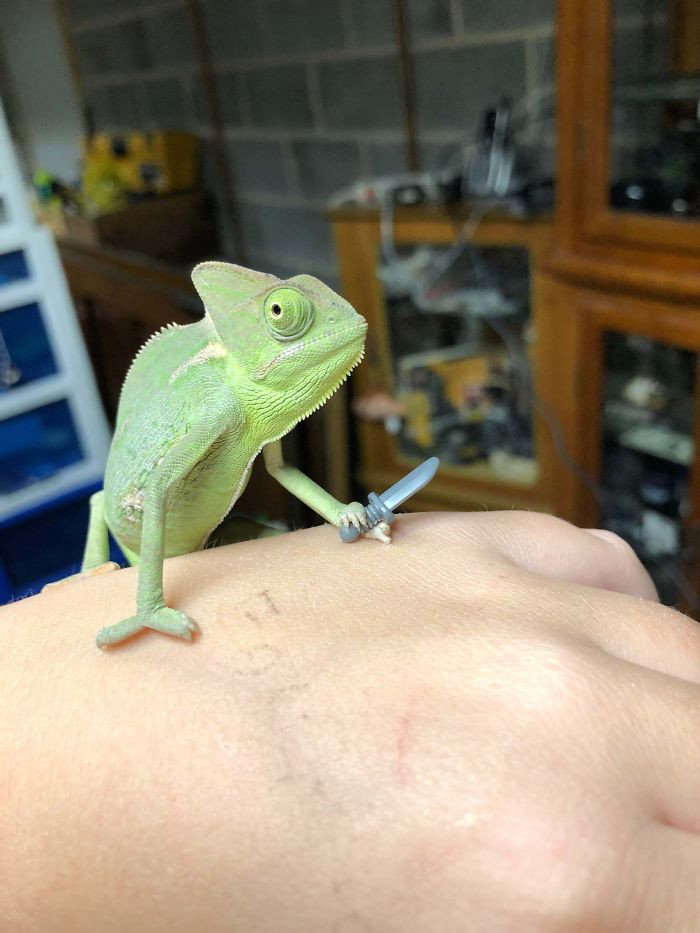 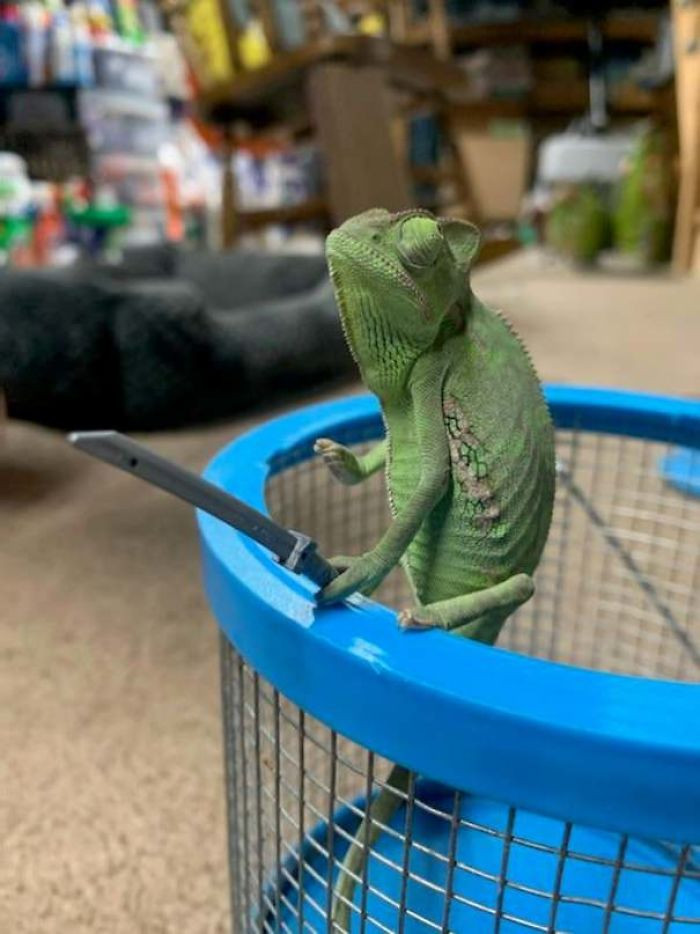 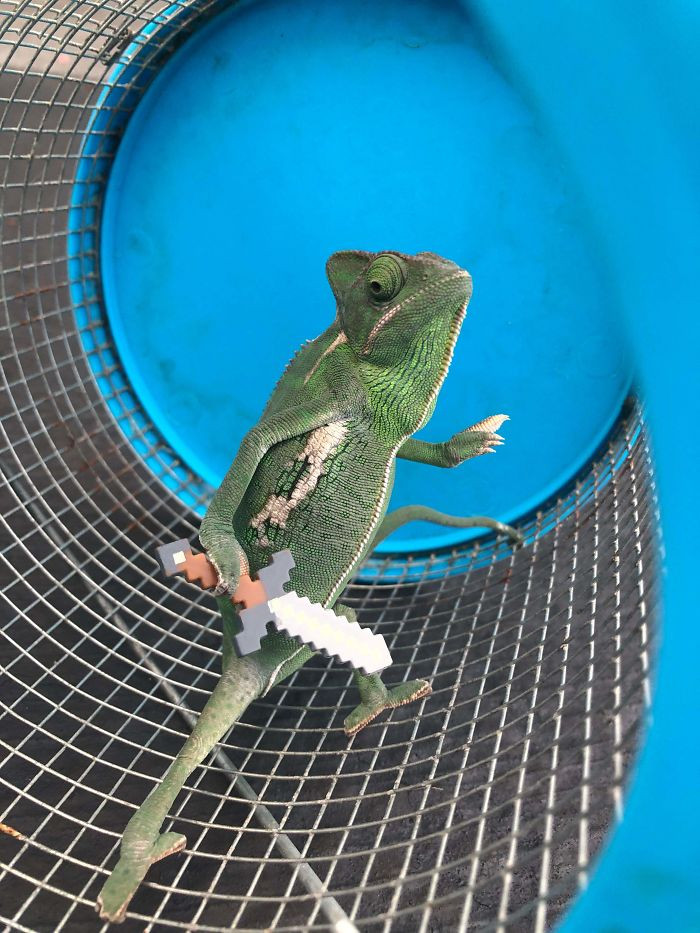 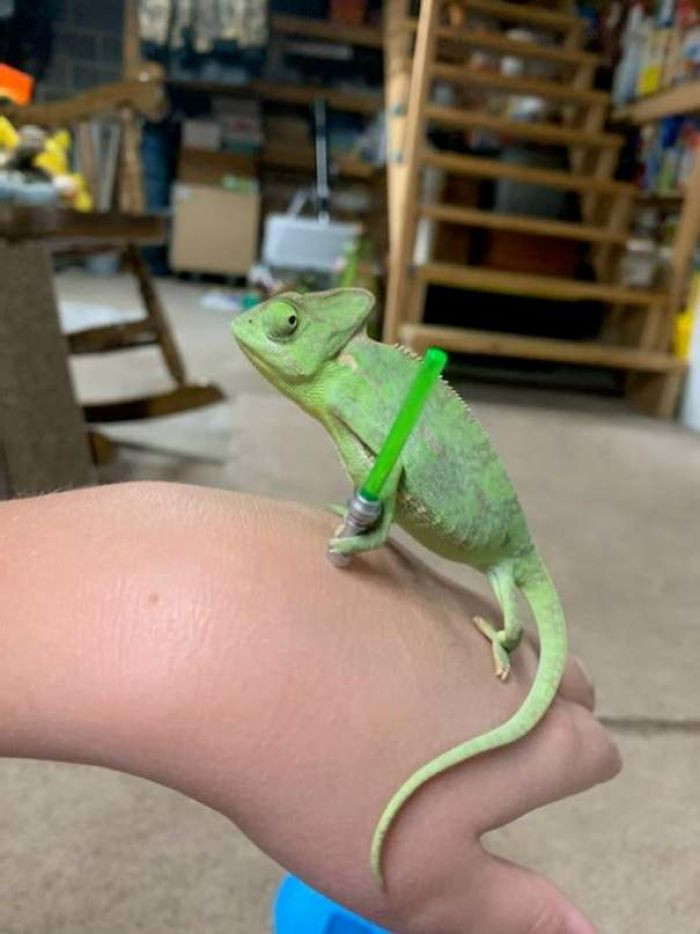 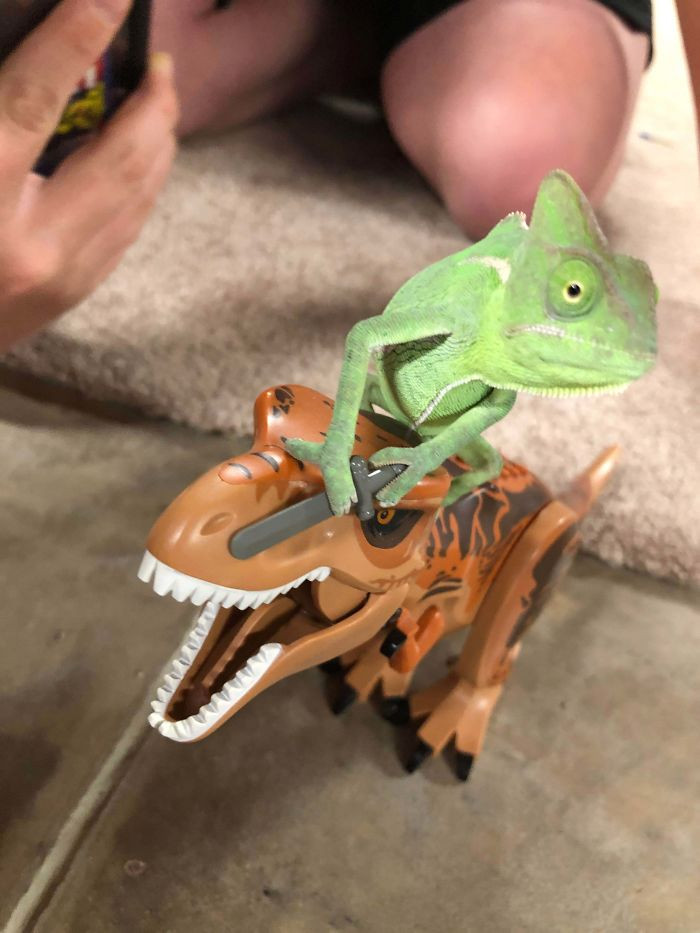 "We got the idea of giving her the Legos because I saw something about chameleons holding things a while ago, it might've been on YouTube," the redditor Chonky_lizard says. "But Logan, my cousin, brought the chameleon over to my house for a few minutes and I have a bunch of Legos, so I said, "Oh wait, maybe she would hold a little sword or something!'"

So he gave the chameleon a Lego katana, and she snatched it out of his hand instantly. "We hurried up and took pictures with our phones, and we kept giving her more props and she kept holding them. I did not expect the photos to be so popular.

The first two I posted didn't hit 1k upvotes, so I wasn't that surprised. Then I posted the one photo of her with the knife, and my phone was blowing up with notifications of upvote goals, comments, and awards," he said.

"Logan's chameleon's name is Luna, and she is a veiled chameleon that is about 4 or 5 months old," Chonky_lizard stated.

They have created the Lizards Holding Things subreddit. “I thought that if people liked it so much and if it was so popular, I could make a subreddit for it.

Even though I knew it probably wouldn’t become popular, but it would be cool to have. The moderators are me, Chonky_lizard, Loganteumbreon, my cousin, and my friend, Death_Nugit.”

The Lizards Holding Things subreddit is exactly about that - people share photos of lizards holding things. So far, Lego props seem best for the job. And the subreddit thinks that chameleons “are the best for holding things because they have awesome little grabby feet.”

Their subreddit was established on August 23, 2020: it’s still new and has just 761 members at this time. It is a small but close-knit community, and that is what it makes it appealing. Hurry up and join before it becomes overcrowded.

Chameleon’s feet might look goofy, but they’re perfect for arboreal locomotion (a scientific name for climbing trees and gripping onto branches).

These lizards have five toes on each foot, but they are organized differently on the front and rear feet. Front feet have two toes on the outside group of fingers and three toes on the inner group, and the situations are reversed on its back feet.