The South Plains Wildlife Rehabilitation Center (SPWRC) is a Texas non-profit organization with a sincere goal to "provide humane care and rehabilitation to orphaned, ill, injured and displaced wildlife." They always hope for rehabilitation and release.

One chilly day in late October, a man stumbled upon a hairless, pink animal, alone and incredibly cold. Fearing the animal would not make it through the night, he bundled the little critter up and brought it to SPWRC.

Gail Barnes, who is the executive director of SPWRC, was watching on camera as the man dropped off a small box near the intake building. In fact, Gale had received a call that an abandoned baby possum would be dropped off, but from looking at the camera and upon first inspection, Gale thought a hairless cat had been dropped off isntead!

In an interview with The Dodo, Gail chuckled:

“As I was bringing the box back, this arm comes out ... and it’s hairless, and I go, ‘Oh my gosh, this is not the possum. This must be a hairless cat.’” 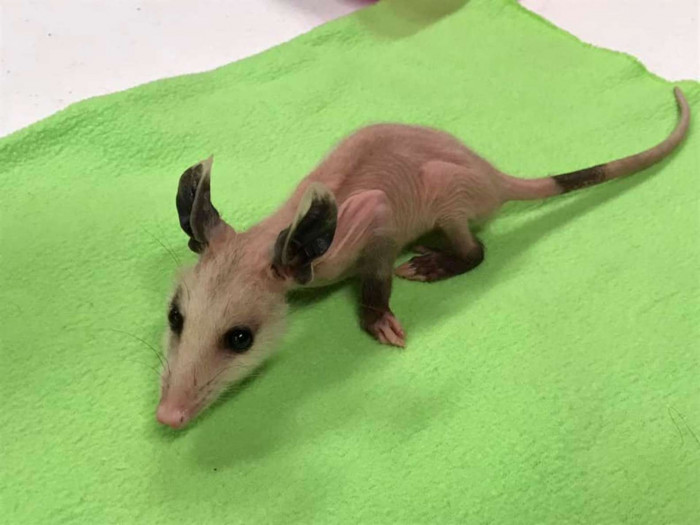 Of course, in the safety and warmth of the facility, Gail realized the baby animal was indeed a possum.

The wild possum had only a few speckles and sprinkles of hair on its feet. 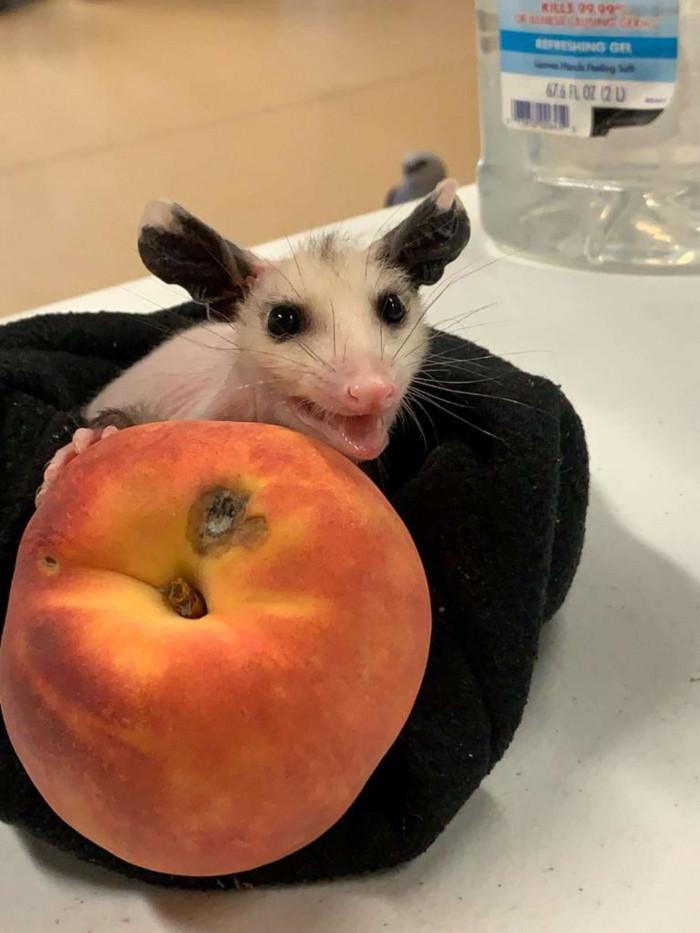 She told The Dodo:

“I thought, ‘Oh my gosh, she’s so cold,! She was hypothermic so we had to warm her up. We put her in the incubator and got socks, heated them up, and got her temperature back up to where it was supposed to be.” 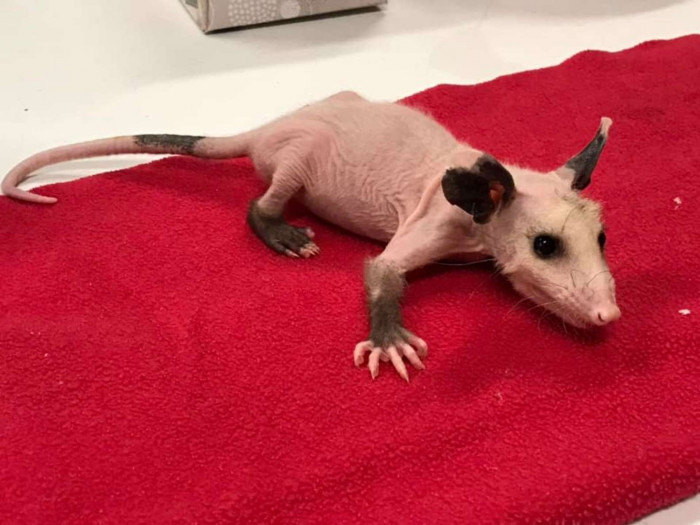 With no idea how long the baby possum had been without her mother, their first warmed up possum goal became weight gain.

They gave the baby possum a variety of foods to snack on and said that she eagerly and gladly ate it all right up!

“If the mother knows that something is wrong with the baby they’re going to drop them off or discard them. So she probably was scared to death.”

Upon closer inspection, vets at the facility realized why the baby possum appeared to look almost like a hairless cat at first.

She has alopecia, an auto-immune disease causing hair loss. With no fur to protect her from the elements like extreme cold and heat, this little possum would never be safely released back into the wild.

Instead, SPWRC put out a call to action, requesting sweaters for the hairless little one. 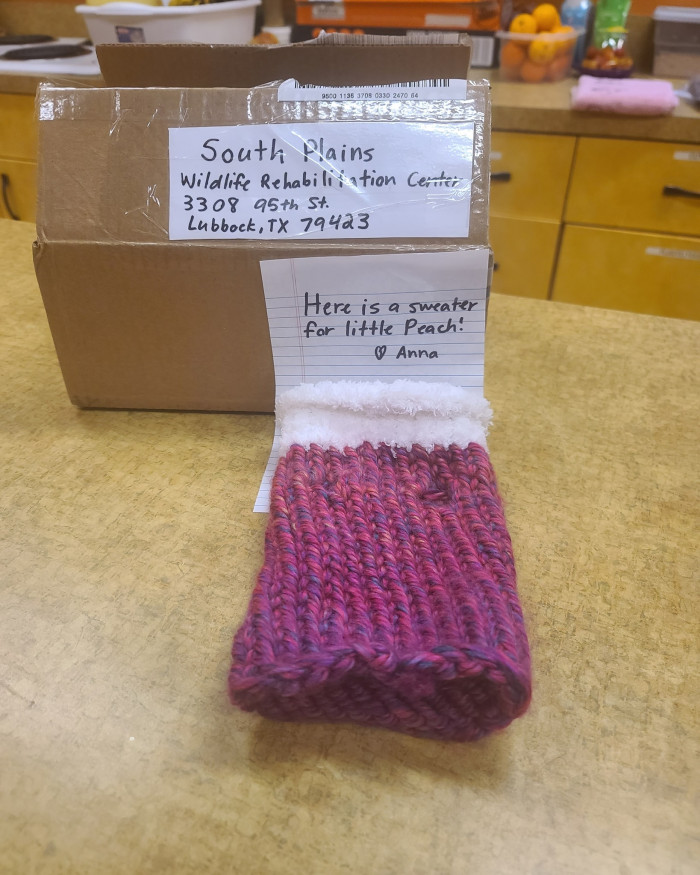 Dubbed Peach, she has since received donations from across the community including pouches, sweaters, and hand-me-down clothes from hairless cat owners.

Peach has more than doubled her weight, thankfully, and she will have a possum roommate named Remy. The duo will live in an indoor/outdoor enclosure featuring a cozy den for snuggled up naps and plenty of space to roam and play. 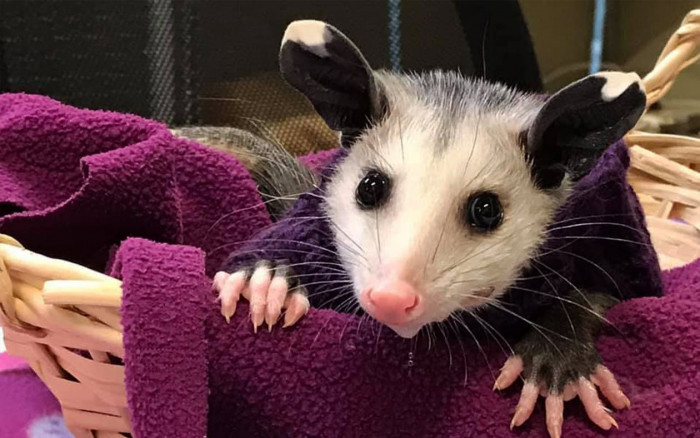 Thanks to an improved diet, Peach is growing some hair, but her condition will still prevent her from ever being released.

When SPWRC put a call to action out requesting clothes for Peach, they probably did not anticipate such an enthusiastic response. Gail says that Peach now has a summer and winter wardrobe. What a lucky, little lady! 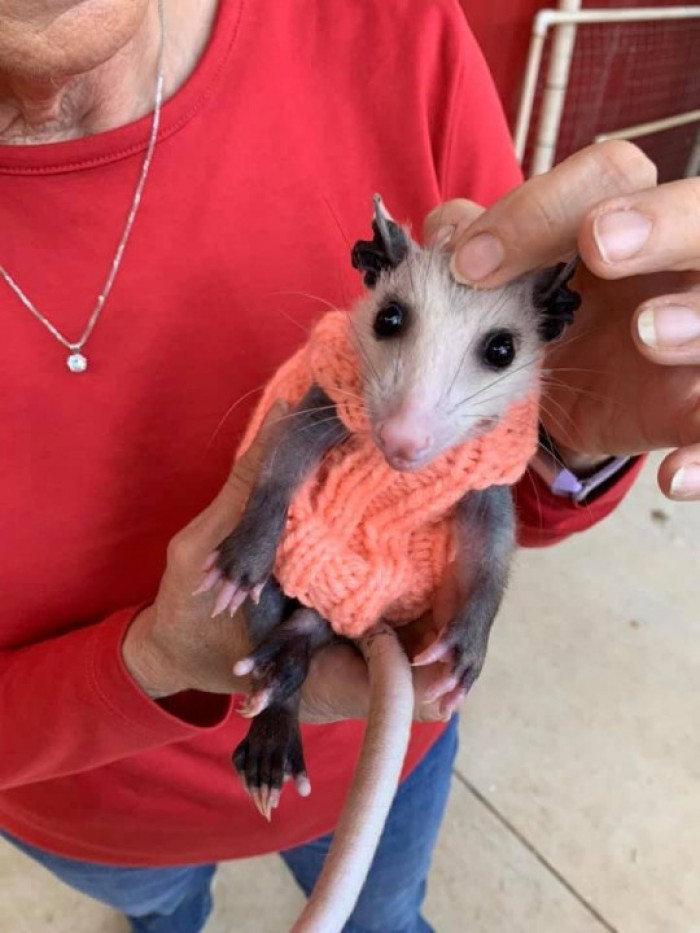 Gail and other volunteers with SPWRC insist they do not usually advocate for dressing up wildlife animals, but Peach is a special case.

They hope that the alopecia possum will help reduce stigma around possums in general. Gail told The Dodo:

“Possums are one of the most misunderstood animals. People trap them, they don’t want them in their yard, they think they look prehistoric because they have more teeth than any other mammal. But they’re really very beneficial. They’re scavengers — they eat all your insects, your bugs and your snakes."

To donate a small sweater to the possum, you can address it to South Plains Wildlife Rehabilitation Center, 3308 95th Street, Lubbock, Texas, 79423. To help the center care for wildlife in need, you can make a monetary donation via PayPal.