Researchers Try To Discover How Dogs Recognize Other Dogs, And Their Work Goes Viral Because It’s So Adorable

Ph.D. candidate in clinical psychology Benjamin Katz came across an interesting and wholesome study. It’s called “visual discrimination of species in dogs” (Canis familiaris), and it verifies that dogs can establish whether another animal is also a dog by looking at its photograph!

Katz was so delighted after he read the research, he decided to post it on his Twitter. One tweet wasn’t enough, though, and he ended up creating a whole thread. And an awesome thread, for that matter. Katz’s affection for dogs utterly took over; his enthusiasm poured into every word he wrote, and he even shared screenshots of the research to get the point across. 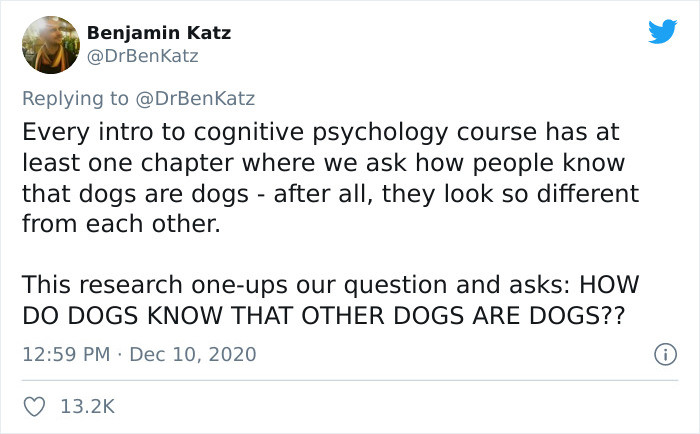 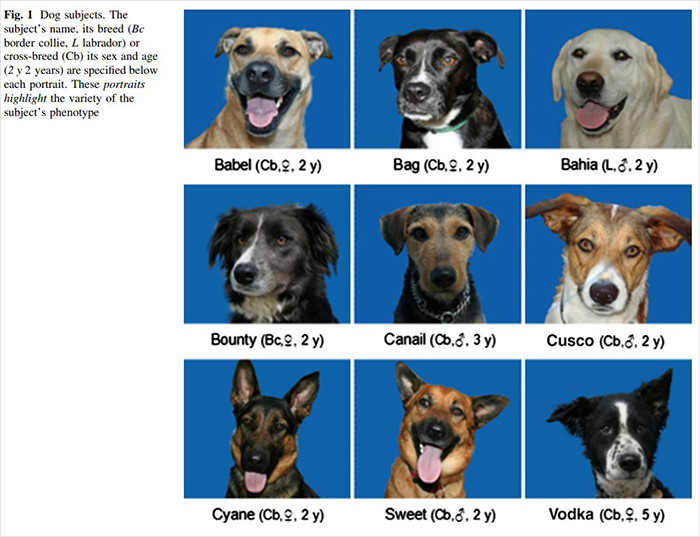 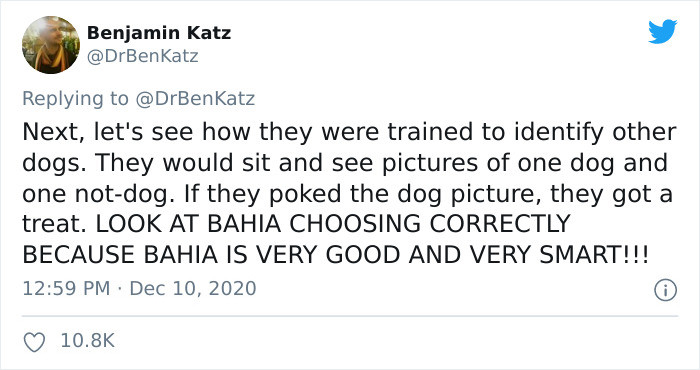 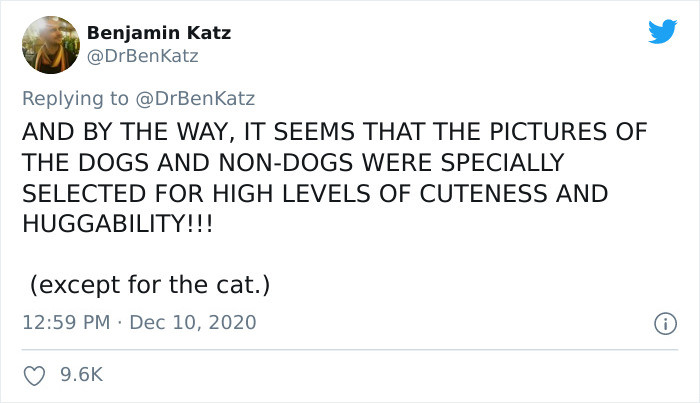 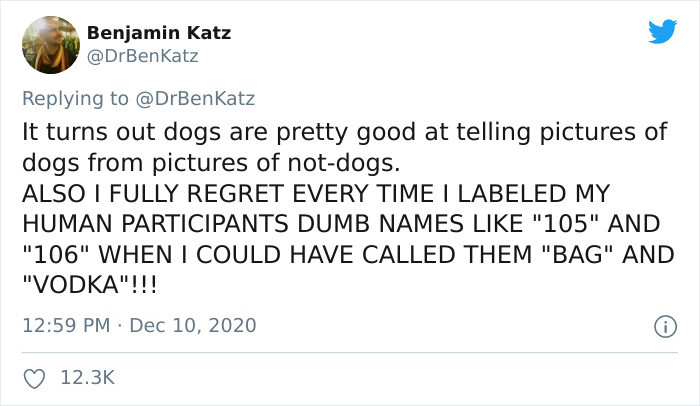 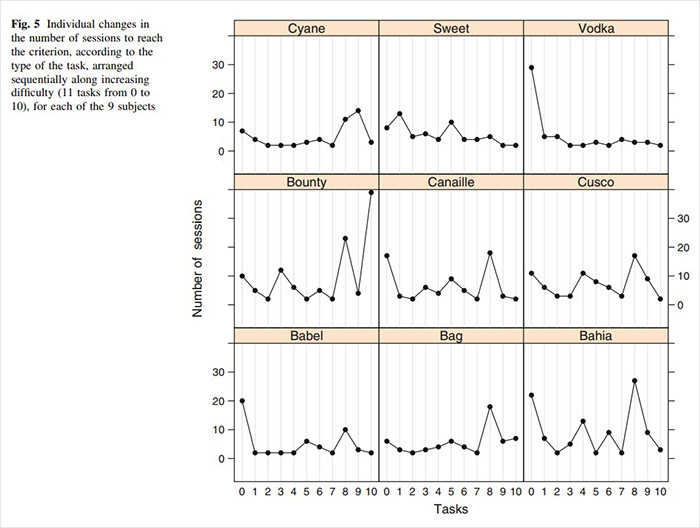 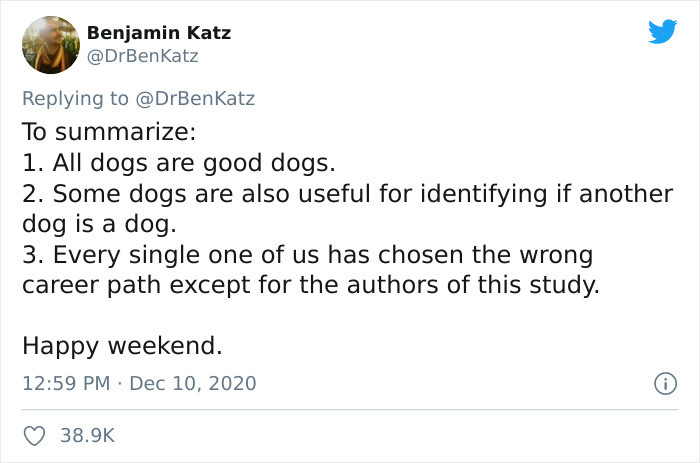 The procedure went like this: The scientists used two different sets of colored digital head photos as incentives: 3,000 dog pictures and 3,000 “non-dog” pictures. The orientation of the display (left/right) differed randomly. Each test involved a choice the dogs had to make between the two stimuli. One of them was being rewarded while the other wasn’t.

The benchmark for passing this test was that the pooch without any help, directly returned to the “sitting area” and regained the sitting posture after the order “place! /here!” was given by the researcher behind it, sitting still before hearing the directive “image!” given by the same researcher, and then in a delay of less than ten seconds gets up to put its paw on the selected stimulus.

The researcher wore dark glasses and stood still, arms by his sides, 1 meter (3 feet) behind the pooch, triggering a clicker if the dog’s choice was accurate and releasing a food reward following it. After making a wrong choice, the pooch simply would go back to the “sitting area” where it continued to sit down, facing the display.

Great attention was given to avoiding visual, physical, or acoustic signals that could inform the subject about the place of the stimulus that was rewarded. The scientists captured the whole experiment on video and checked for potential cueing of the canines.

All phases were the same for the nine canines. The criterion for a dog to pass from a given task to the next one was set at ten correct trials out of 12, for two successive tests.

After Task 6, the stimulus-reward principle was inverted so that choosing the “non-dog” picture was rewarded.

“Our results explore the dog’s ability to visually discriminate 2D pictures of the faces of various species depending on whether they represent dogs or not,” the scientists wrote. “Behavioral studies investigating the capacities of dogs to use visual cues for face identiﬁcation are still relatively sparse compared with humans and other animals such as non-human primates, sheep, and heifers.

Compared to previous studies investigating such abilities in domestic dogs, our study is the only one using as stimuli species other than dogs and humans, that is, domestic species (cats, cows, sheep, horses, etc.) and wild species (tigers, birds, rodents, etc.).”

“Our study may suggest that dogs can form a visual category of ‘dog pattern,'” the scientists concluded. “We may then hypothesize that there may exist some invariants in dog morphotypes that allow the nine subjects to group pictures of very different dogs into a single category despite the great diversity in canid species.” 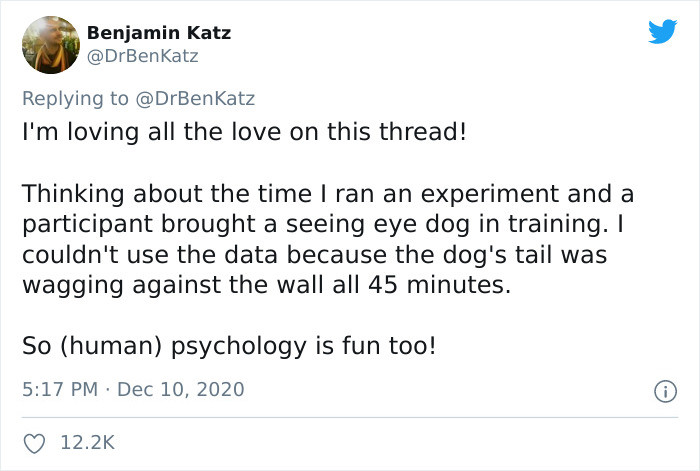 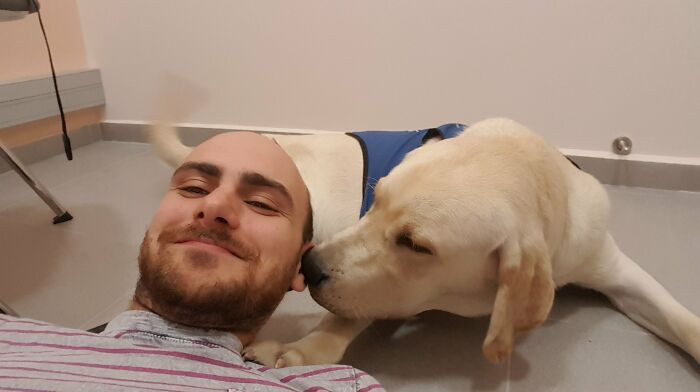 “I’m working with some EEG data right now,” Benjamin Katz told the reporters. “[It’s those] brain waves you collect when the participants wear a cap with electrodes and wires sticking out of it.

Data analysis can be pretty dry and I was looking for a distraction, so all of a sudden it was the most important thing in the world for me to figure out how dogs know that other dogs are dogs. When I googled it and found that the research was both rigorous and adorable, I was hooked.

I also like the research itself because it does help us understand dogs better. I always knew that dogs could identify each other by scent and gait. It was new to me that they also do by sight.”

As you can tell by now, Benjamin adores dogs. “I grew up with them my whole life,” he said. “Honestly, I love how simple and straightforward they are in showing you what they like. Most of the time they walk in the room and seem surprised at what’s going on but still happy to be there. We all need that kind of vibe in our lives.” 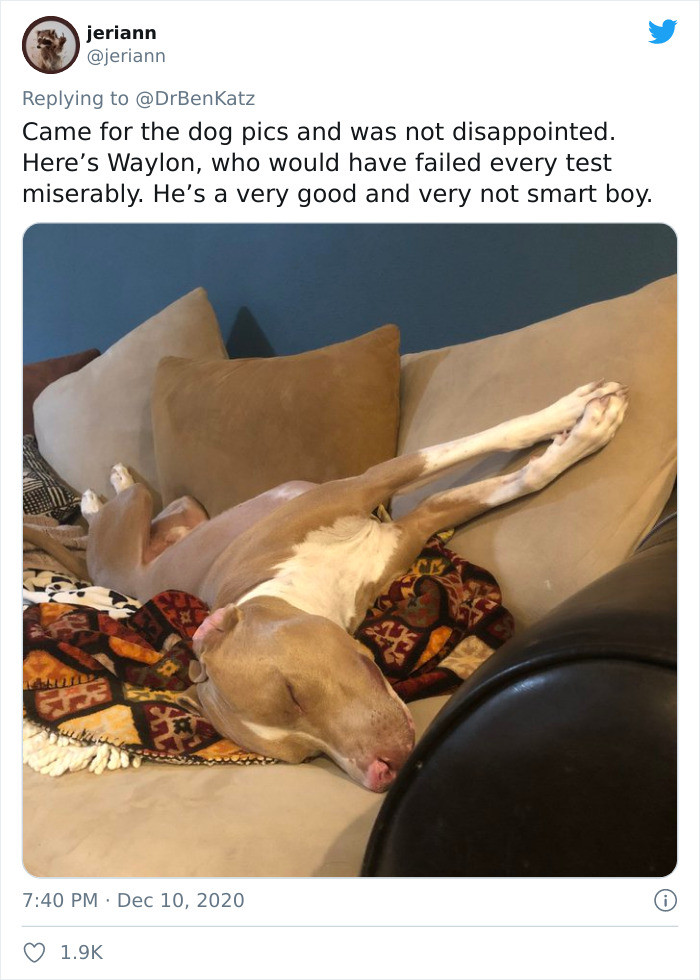 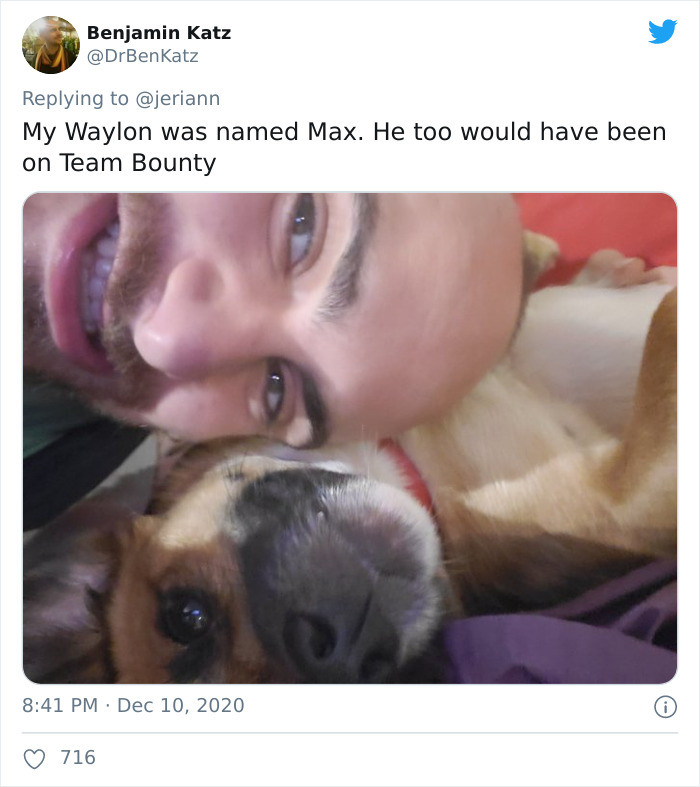 Benjamin said the responses to his thread have been phenomenal. “I actually study how people experience social approval and disapproval and I can tell you—it gave me a dopamine rush that lasted for days.

Honestly, I just feel lucky that so many people came together to make such a kind and wholesome corner of the Internet. So many dog pics and videos and genuinely funny jokes are in the comments! There were some cat people who were unhappy that I said the picture of the cat was unhuggable, but that’s OK. I stand by my opinion.”

He even contacted the author of the research paper to thank her for making thousands of people happy. She expressed gratitude to Benjamin and said she’s not a social media type, so she was delighted he helped the research get all of this attention. And she also loved Benjamin’s enthusiasm! 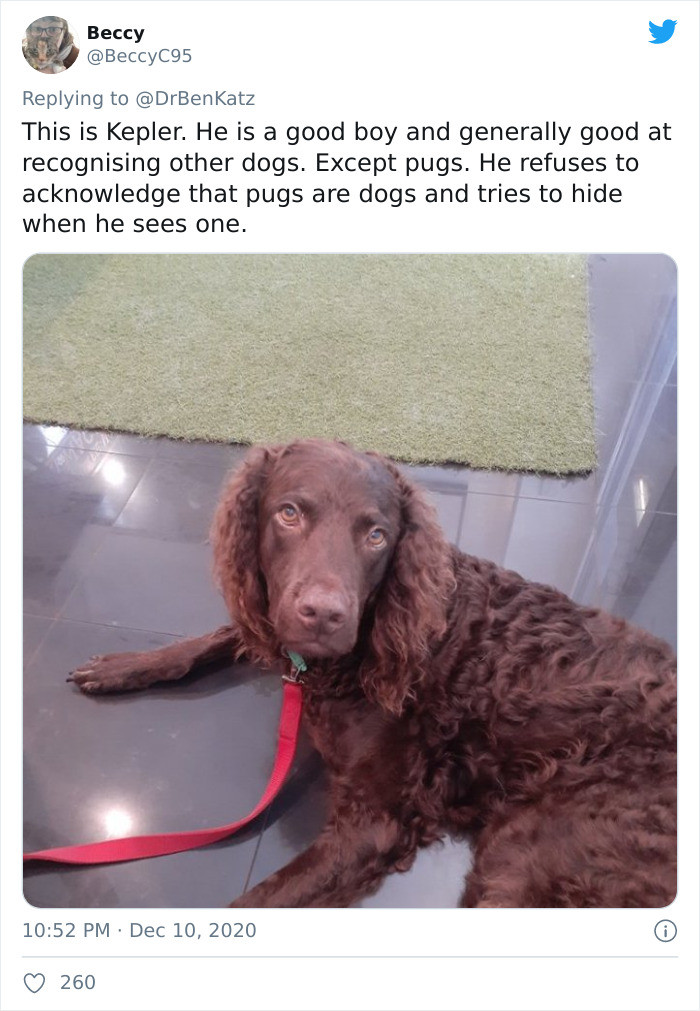 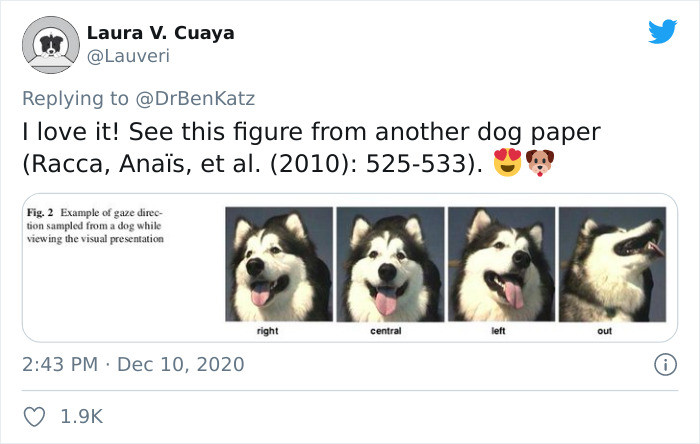 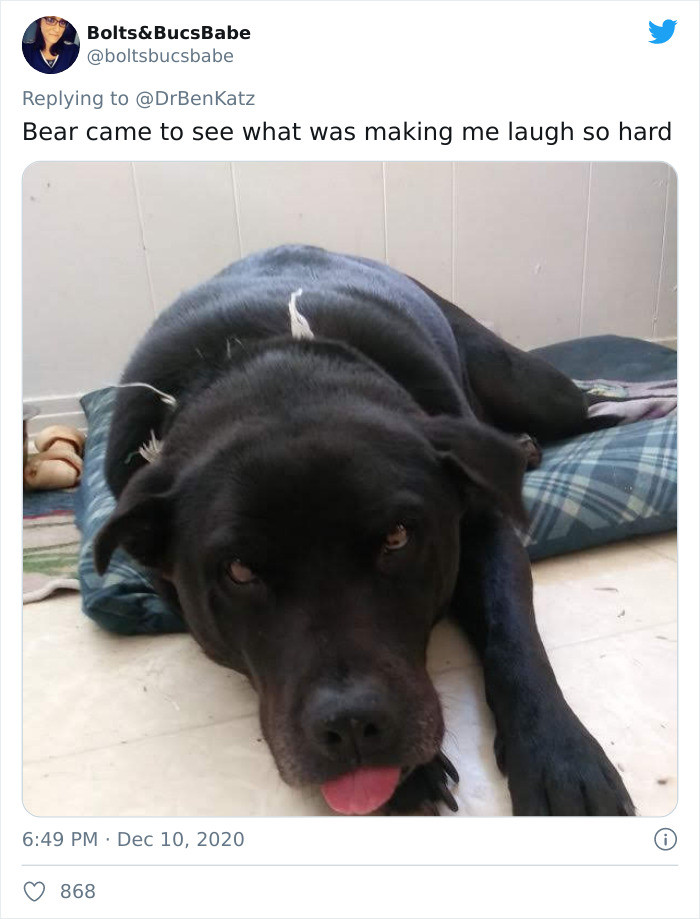 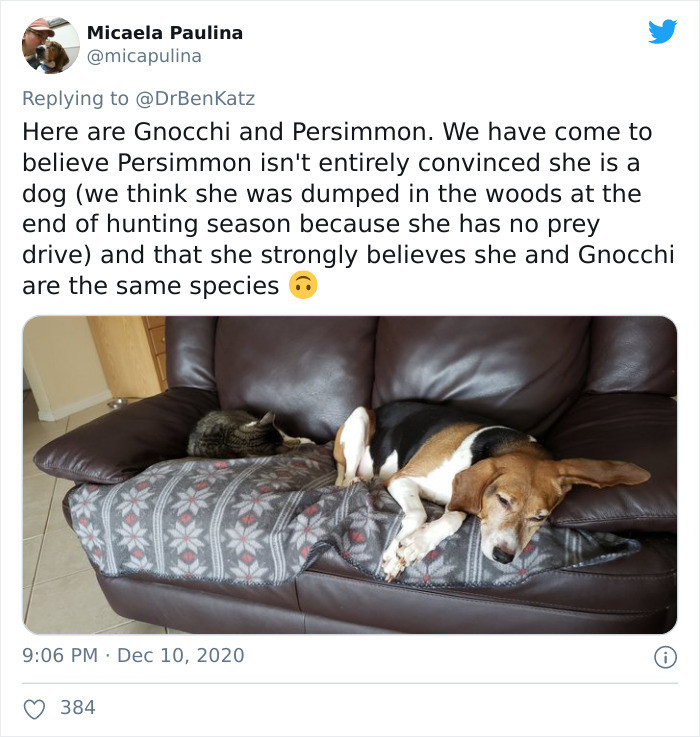 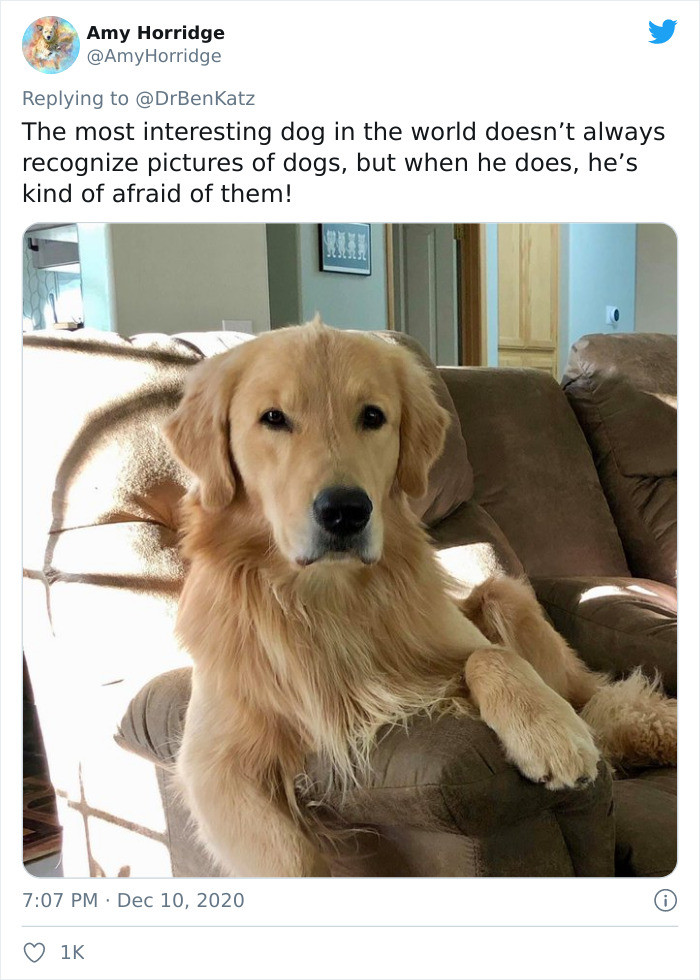 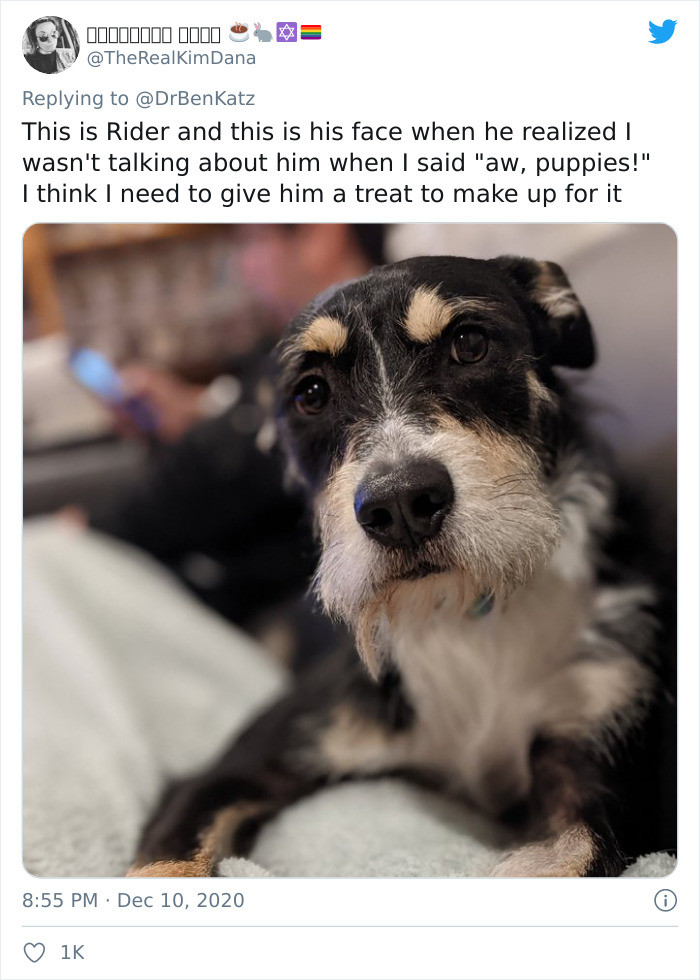