Have you ever had someone passed wind in your face, or better yet, have you ever listened to yourself fart? Whew... my, oh my. Some people find farts damn right hilarious. Yes! They do.

Some find it annoying and most farts can smell so bad, especially those that make no noise when released. Flatulence, also known as "passing wind" or "farting," occurs when gas escapes from the digestive system via the back entry.

Flatulating is commonly laughed about, but too much farting can be humiliating and cause you to feel awkward around others. Notwithstanding, it can be controlled with changes to your eating routine and way of life.

Farting is a typical biological process and is something everybody regularly does. Certain people fart a couple of times per day, while others fart much more frequently.

However, the average is 5 to 15 times per day. If someone discreetly farts in a public place and it spreads, all eyes will be rolling to find the culprit while your hands are helping your nose.

Worst of all is that the culprit maintains a calm and sincere expression. The culprit will even join in looking for him or herself (lol... you’ll understand if you’ve been a culprit).

The redditor in today’s article passed wind in his cat's face on her first birthday, leaving her traumatised. Well, he got claws stabbed in his ass for that behavior, and the Reddit community had a good laugh session.

You swallow little amounts of air when you swallow food, saliva, or water, and this little air gathers in your digestive system. Gases can also be formed when you digest food, and your body needs to dispose of this air buildup by burping or farting.

Prepare to have a good laugh session as you scroll further.

Haha... That moment this happens 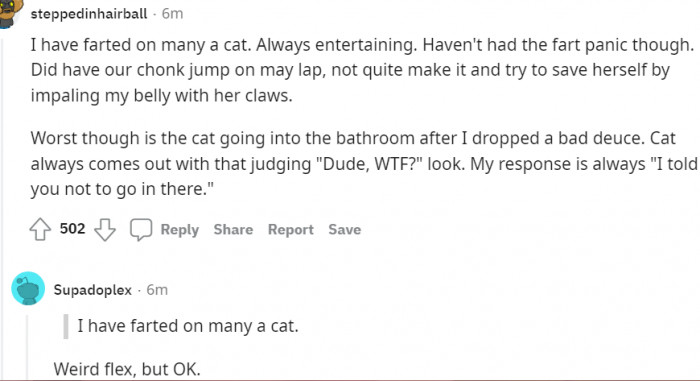 A pretty messed up situation 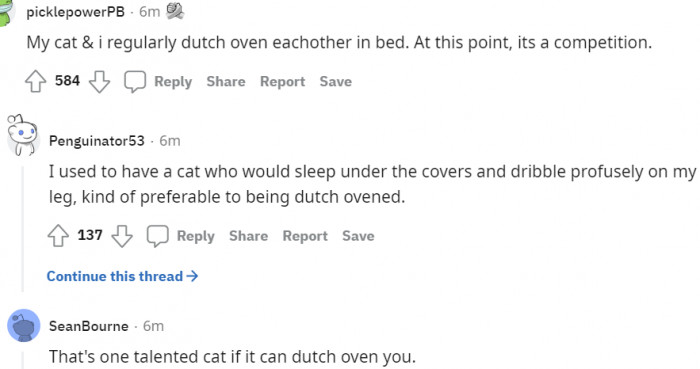 People be ripping things off in their sleep 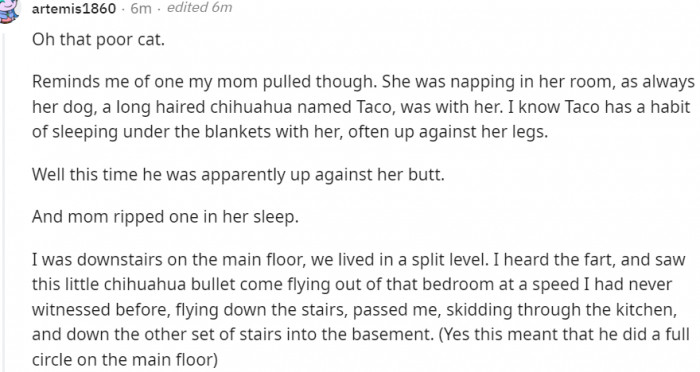 A cat who doesn't give a fanny about farts

It is really funny

Same question on my mind

Why make a pillow out of my ass in the first place? You asked for it. But then, check out the reply...

Girl, that was all you

The climax of the story

Just that the cat had a different reaction.

Being fartblamed by your own cat... No way

Awwn... Someone's day is made already

The spooking was a fart

Well, at least she was honest.

What an incredible event

Sometimes, this just happens and you can't help it

Farting on a flight

Here's a culprit blaming another for his fart deeds...

The Op was elated with the comments and finally added this edit:

At times, you may not even know that you have passed wind due to the fact that a large portion of the gases are scentless and are often released in small amounts. If the fart contains gases that smell, such as sulfur, it will typically have an awful smell.

Notwithstanding, it is essential to remember that the gas you pass out might, in some cases, smell a little. But then again, whew!