Sometimes you see a question posed in Reddit's r/AITA (Am I The Asshole) that is so outlandish and absurd, all you can do is refuse to believe it is rooted in reality. To be fair, as long as the Internet has existed, people have used it to lie.

Whether or not every question posed is sincere or even real doesn't seem to negate the hypothetical entertainment purposes of living vicariously through other people's drama. It must be human nature to relish in the chaos of others, knowing we can do very little about our own bubbles of ineptitude.

This brings us to today's discussion. A Redditor, who created a throw-away account just to post this seemingly ridiculous question, came to r/AITA to ask if they were in the wrong for being upset.

A simple premise that draws in over 3.3 million Redditors, there are thousands of posts daily. And yet, sometimes one still throws us all through a loop of "but wait, WTF?"

This Redditor wants to know, "AITA to be mad at my friend for creating a fursona out of my cat?" Chances are if you've made it past the title and this far, you're at least vaguely familiar with what a fursona is.

That's not us passing judgement, don't worry, we've all googled furries before I'm sure. According to Wikipedia:

"A fursona is a personalized animal character created by someone in the furry fandom. The vast majority of furries have fursonas with the Anthropomorphic Research Project saying that nearly every furry has a fursona with it being estimated that 95% have a fursona and the average furry having 2.12 fursonas."

In layman's terms, a fursona is an alter ego and this Redditor's friend has created an entire furry identity for themself as their beloved family pet. I don't care who you are, that's weird!

AITA to be mad at my friend for creating a fursona out of my cat? 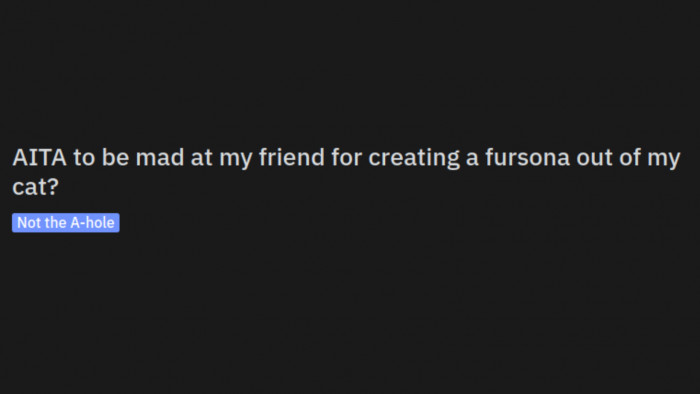 Two best friends with no qualms about one of them being a furry. After all, being a furry isn't explicitly a sexual kink. It's often all in good fun.

One cat to rule them all.

"This has got to be a joke and not real life?"

What can you do when all of this money has been spent?

In a 2014 Vox article, the question about furries and sex was one of the first things addressed, because it's a pretty common misconception. Being a furry isn't explicitly a sexual fetish, but "like with any other fan interest (video games, comics, etc.) there are sexual themes present. While sexual activity with other furries (known as "yiffing," after the sound foxes make during sex) is part of the subculture for some, others maintain a non-erotic interest in the subject."

"We go to conventions to hang out with friends, maybe buy something like art or badges, go to a discussion panel or see a show. Swinger parties and fetishes are there, but that's not what the fandom is about."

Dr. Courtney "Nuka" Plante, a social psychologist at the University of Waterloo added:

"Nearly all fur-suiters will make it explicitly clear that sex in a fur suit is completely undesirable (not arousing, damaging to the suit, and not something they’re interested in doing)."

Would this information ease your mind if your friend made a fursona out of your family pet? Probably not. The Redditor received over 400 comments (very quickly, I might add,) with none more distinctive than the top response of them all.

All debate aside: Louder on this one, honestly.

A fair and valid point.

Even if OP's friend isn't into the kinky side, he probably has followers who are.

According to the Vox article: 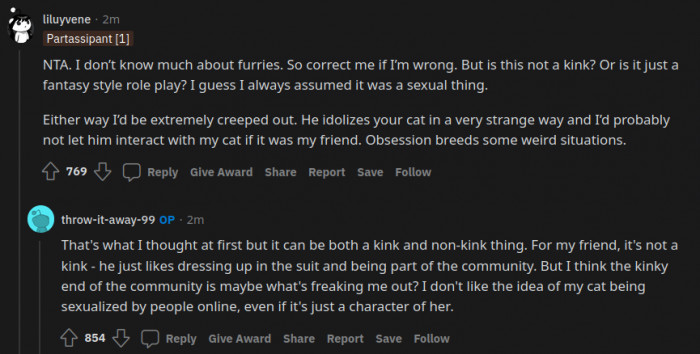 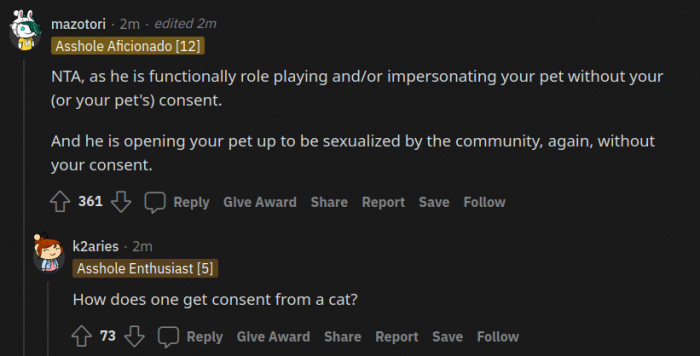 Being a furry is clearly not THE issue here. 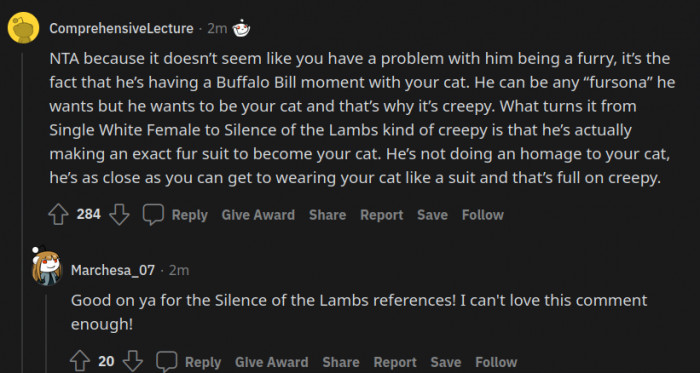 Reddit user FrnchsLwyr responded to the question posed with a sincere and articulate answer:

"I am by NO means an expert on furries. I have literally 1 friend who's a furry. He's told me (and I am not speaking verbatim here) that a "fursona" is something unique to each person in the community, and (at least for him) his fursona is based on an animal that he's always felt spoke to him - the red fox. The fursona itself is a repository for not just his expression of that inward self...but yes, also a lot of his kinks. (NO JUDGMENT FROM ME). I'm not sure what he spent on the suit, but I do know it was pretty expenaddedsive, that he saved for a long time for it, and he's been very happy to wear it now that it's here.

So, based on this purely anecdotal evidence, I'm going to say: NAH.

I'm going to assume your friend's interest in being a cat just like the cat you own is rooted in his deep love for your cat because it's a cat and he feels like he's really a cat (fursona wise, at least). I'm sure he thought you'd be flattered, too. Clearly...he was mistaken in that regard.

He's not an AH tho - it's a deeply personal thing to go out and do what he's done. It's not a spur of the moment thing, by any means.

I think, if you love your friend and he loves you, this is something you work through. Good luck"

Although this response to FrnchsLwyr raises a completely fair counter-point.

Reddit user mazotori made sure to clarify that OP's friend wasn't sexualizing her cat and she confirmed he's not into the kinky side at all.

But this follow-up response is a real eye-opener. 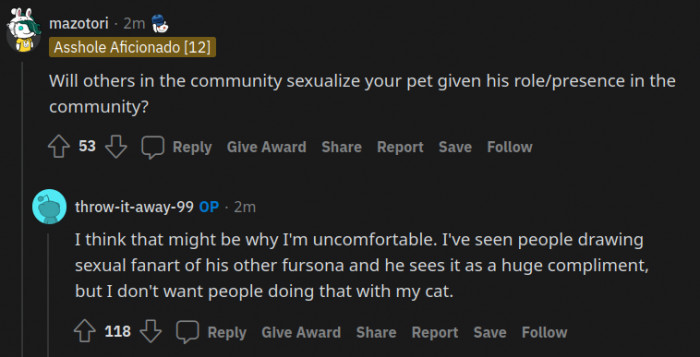 "Massive NTA. Aside from the issue others have mentioned of it possibly leading to strangers on the internet drawing sexualized fanart of your cat... he's technically probably not violating your intellectual property rights, but it's morally iffy. When I looked it up I was surprised to find that pet owners generally do not have intellectual property rights to their pet's likeness. The owner of the cat in the Keyboard Cat video successfully sued Warner Bros for copyright infringement, but it sounds like the reasoning is probably based on the specific videos and "characters" being copyrighted.

But, hypothetically, if you were to post cute pictures and videos of your cat on the internet, and monetized that content, there would be a risk of people associating your cat with your friend's character. If he'd just designed a fursona with similar appearance maybe not but since he's even copying the name he's going to literally cause your cat's name online to by associated with furry art, including NSFW furry art.

"I think that might be why I'm uncomfortable. I've seen people drawing sexual fanart of his other fursona and he sees it as a huge compliment, but I don't want people doing that with my cat."

And that makes it worse.

Correct me if I'm wrong but isn't a fursona supposed to be not just some random character but a representation of you, specifically? Drawing sexual fanart of another person's "likeness" without their permission seems like sexual harassment or one step away from it, but you'd have to be living under a rock to not know that the internet will draw porn of anything, especially if you show it to 5,000 people on Furry Twitter. If he's fine with people doing that with his own character whatever, that's cool, but this guy is creating this character knowing damn well that if he posts it on his account people will draw pornography of your cat, and it sounds like he plans on encouraging this, continuing to treat it as a complement, and expects you to be okay with it.

That's creepy as fuck. Even all by itself, but again he's using the same. fucking. name which could make it very easy for some random creep to find out who you are / find photos of your cat if there are any pictures of her online that are publicly accessible. Jesus I'd cut someone out of my life so fast for pulling that stunt.

Tell your friend that you're flattered but he needs to change the character's name at a minimum and if it's not too late to alter the design slightly so that it's not identifiable as your cat, and never disclose the source of the inspiration to anyone else for all the reasons above."

Modern problems with no modern solutions.

Unironically HILARIOUS. A real knee-slapper, y'all.

Do you think this would be a peaceful way to exit the earthly realm? 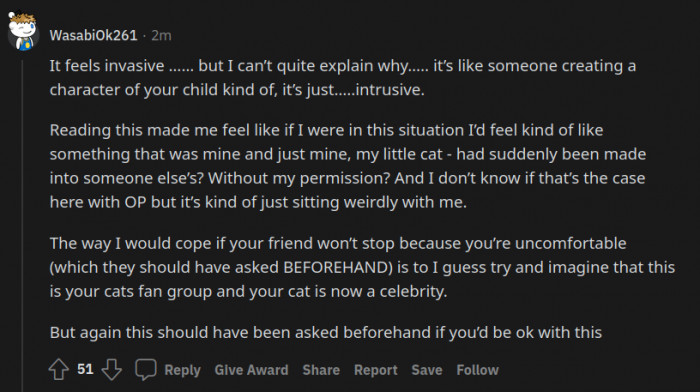 Do I think he's an asshole? No. Rude and impulsive? Yeah, a bit. He didn't think it through, and probably just didn't see a problem with it because it makes sense TO HIM.

I think you need to have a calm discussion with him. Lay out your thoughts; you don't want internet strangers sexualizing a character based off your irl pet. Ask him to change the name, maybe change up the design (add a wig! Add wings! Other accessories! There are a ton of fun extras to add to a fursuit). Maybe not post it online until he does so, and not at all if he doesn't.

If he doesn't respond to your concerns in a respectful way? Then yeah he's the AH. But no one is an AH yet here.

Personally, I wouldn't be bothered by a SFW costume of my cat that someone I know owns. Hell, I think my little gremlin would be fun to get a suit of! But I'd definitely have a convo about how I want the suit to be seen. I know other people out there have suits designed off their pets! And as a SFW furry I think they're great! But you are absolutely valid in your concerns.

I hope everything ends up alright OP! Tell your cat a random stranger says hi lol" 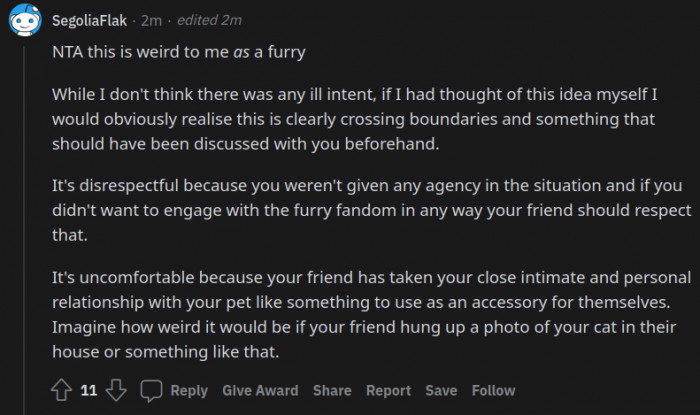 In all honesty? Same.

Another very fair point has been raised.

A lot of furries were commenting on this thread, which is a good thing.

It would be repugnant not to include this response. 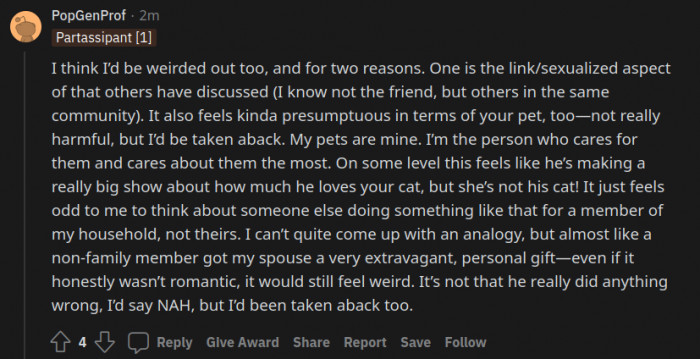 Well, that's more than enough of that. OP was deemed NOT the asshole in this situation and the discussion was equal parts lively and insightful, and at times it was also hilarious.

Now, put yourself in this Anon's shoes. What would you do if your friend made a fursona out of one of your pets?

Not just a fursona, but a custom costume that cost 6 grand? It can't possibly be the sort of thing many folks have experienced, so we're stuck in the hypothetical (and with no update, we don't even get to see the suit.)