A lot of us have animals or children and we may have certain types of utensils and bowls that we use for them. There are bowls and plates made for animals, adults, and children.

Imagine a situation - you see someone feed their child from the same type of bowl that they feed their cat from. Some might feel that this is disgusting or degrading while others might think that it is nothing to worry about.

This woman thinks it is okay to use the same type of bowl for their cat as her daughter. Her logic is that the bowl is the perfect size for both of them: the child and the cat.

Her sister in law thinks that this whole thing is disgusting and says that puts her daughter and the cat at the same level. I mean... it's just a bowl though, right?

Let's look deeper into this story and see what people had to say about the situation.

Here Is The Story...

Is She The Asshole?

Seems that people are taking her side and saying her SIL is overreacting. 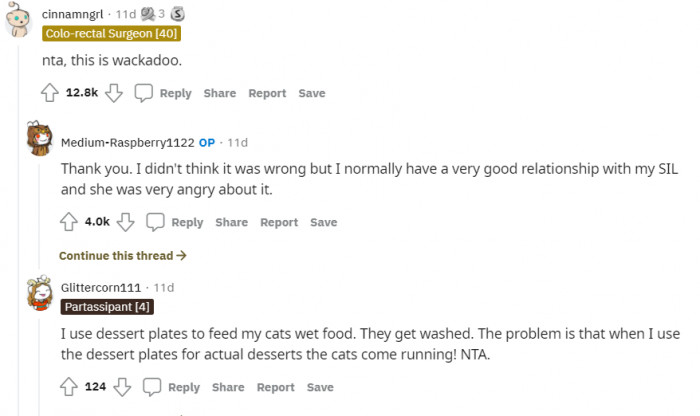 It seems that a lot of people are like this woman in the sense that they also use the same type of bowls for their pets and themselves and their family.

Even if it was the same exact bowl, if you wash it, then it's fine.

Getting mutual friends involved really was not necessary.

They do have a point, it's just the same kind of bowl. It's not even the same exact bowl, so what is the issue. 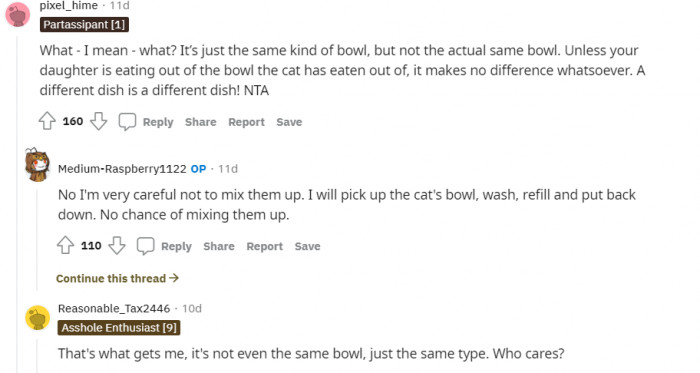 This commenter says that soap is good at removing anything that needs to be removed, so there's no issue with using the bowl.

Also, babies are gross and are more than likely to get into something of the cats anyway, which could be much worse than sharing a bowl. 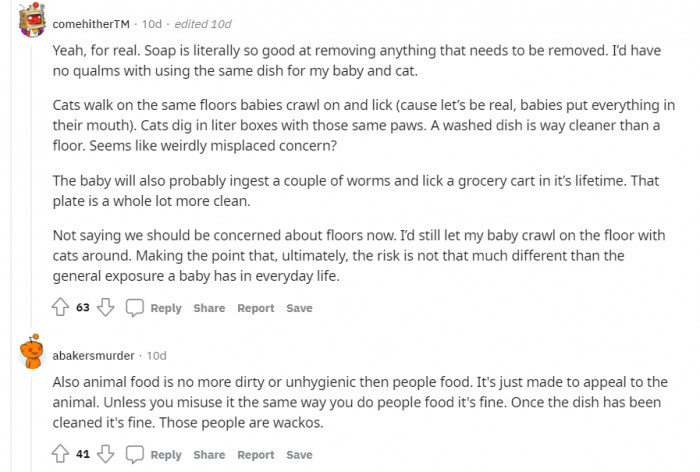 Why is the SIL using a bowl as a measure of the daughter's worth...

As long as it's being washed, it's just a bowl and should not be an issue at all.

Now This Is Our Type Of Logic. 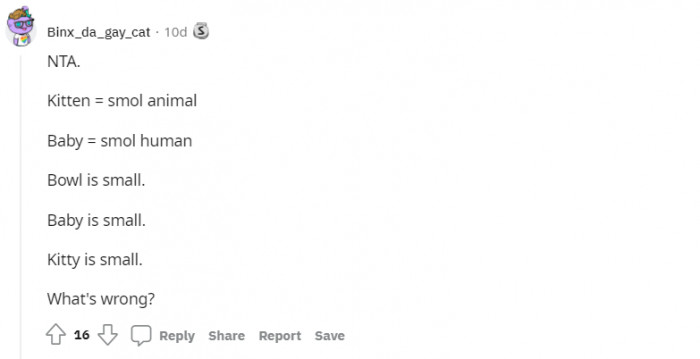 "You're Putting Your Daughter At The Same Level Of The Cat."

A Bowl Is A Bowl.

Another person saying NTA and that as long as she's washing them, then it's fine.

A Bit Of An Aggressive Approach.

OP Isn't The Only One.

Very true, if you don't trust your dishwasher then you probably shouldn't be washing anything in it.

"I wouldn't go to someone else's house and say they're disgusting.."

We're Going To Assume That The SIL Doesn't Let Her Pets Lick The Plates...

This woman definitely has all of Reddit on her side. Even those that said they wouldn't necessarily do that didn't shame her for it.

The majority said she was NTA. I mean, it wasn't even the same bowl, just the same kind of bowl.

Her SIL might be overreacting in this situation. The OP said that her SIL isn't usually like this and they agree on a lot of things, but Reddit was here to tell her that she's not in the wrong.

Share this story with your friends and see what they think of this situation.