UK-based artist Hector Janse van Rensburg has been sharing art on social media since 2012 where he has established quite the reputation for his endearing and often self-deprecating watercolor depictions of life. Not terribly long ago, Hector was inspired to shift the tone of his work to something a little more optimistic and this series featuring a cat offering mental health advice was born, taking off and gaining popularity immediately.

Hector's watercolor style is inspired by Sir Quentin Blake, an artist who illustrated the children’s books by author Roald Dahl. With a degree in Philosophy, Politics, and Economics, Hector turned to watercolor painting in his past times and simply uploaded them to Reddit before they took off and he branched into other social media platforms.

In an interview with Bored Panda, Hector said:

"The comics that came before this series were less optimistic, and this series is a bit like a response to that. They sometimes approach difficult issues like mental health, but the aim of the comics is not to solve the issues but to show a different perspective on them. That new perspective often comes from the cat, who is based on my cat Ona who passed away a few years ago." 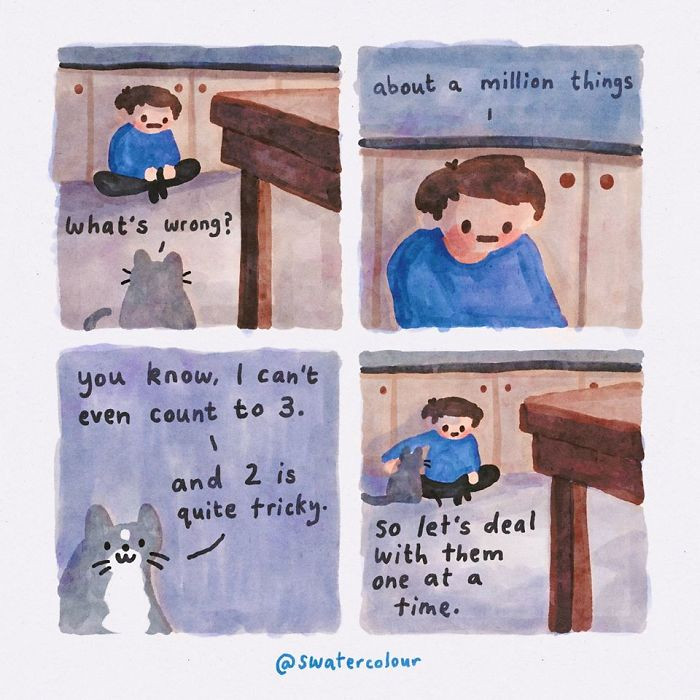 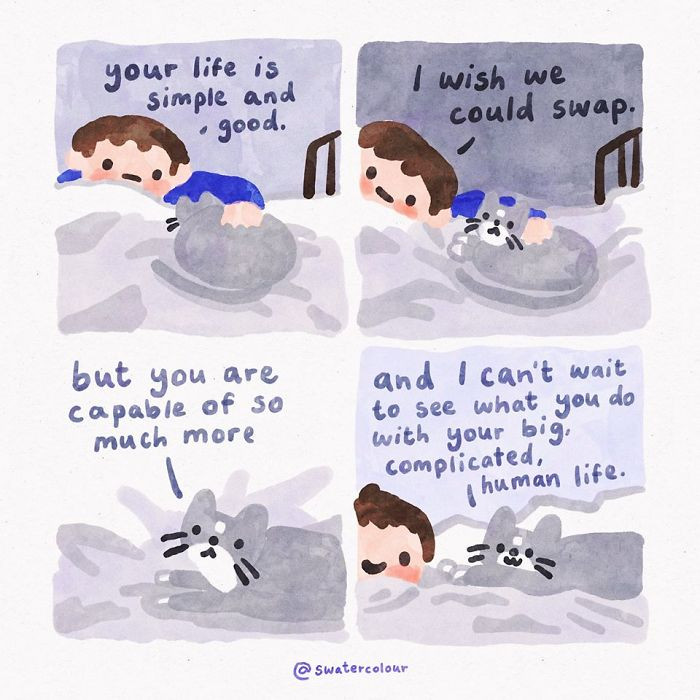 3. You won't be broken forever. 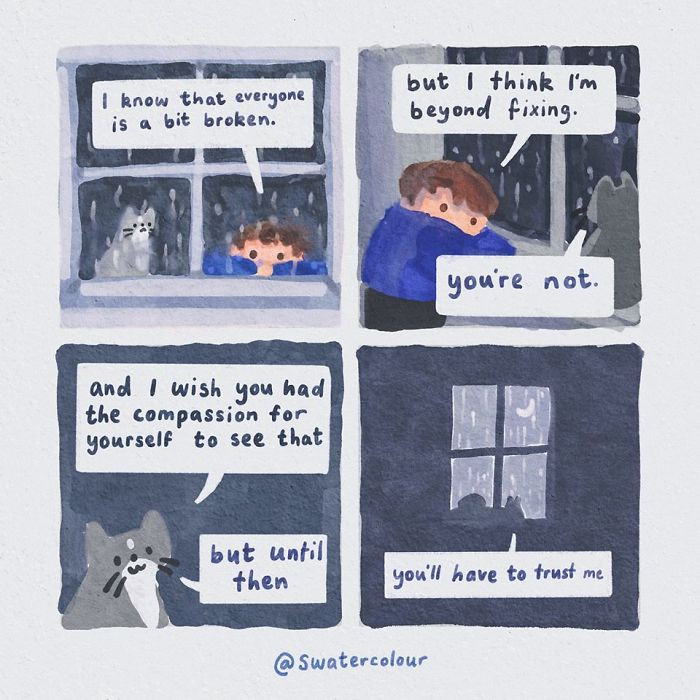 The path here has been a journey. Hector said:

"Before I started painting online about 8 years ago, I had never had any interest in art and now it looks like that's where my life is going. Ostensibly, that just means I'm sitting at my desk with a brush more often than a keyboard, but it is a whole different type of challenge to think of things about human nature that I want to communicate in my paintings.” 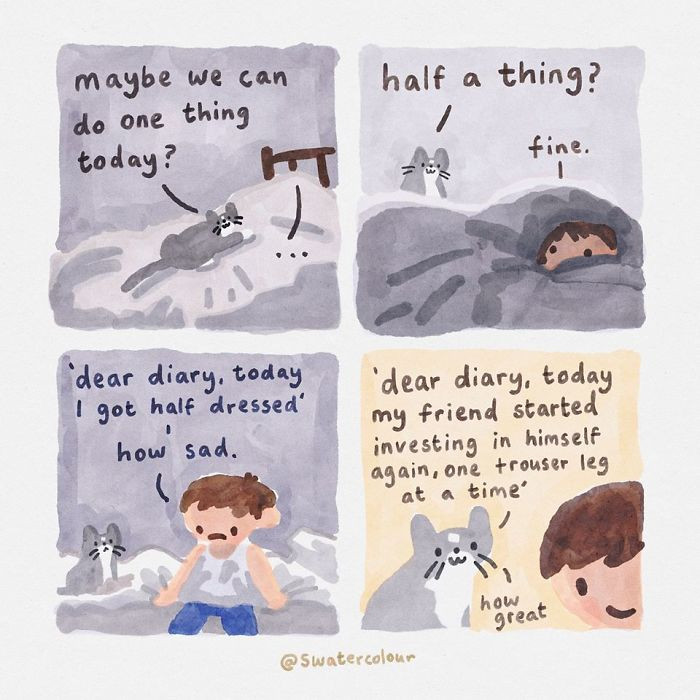 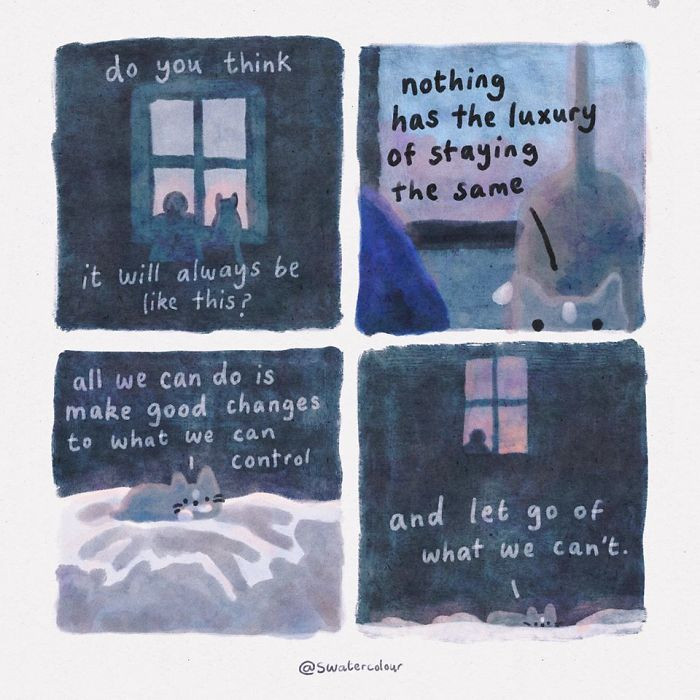 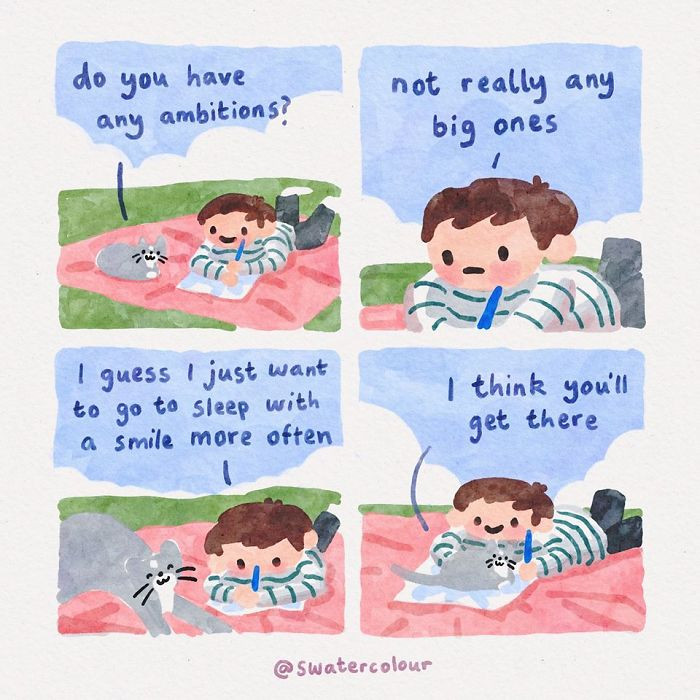 "It's like I'm living through my art, which can be difficult.”

Hector's moniker's on social media are all to the tune of Swatercoulour, or Shitty Watercolour. 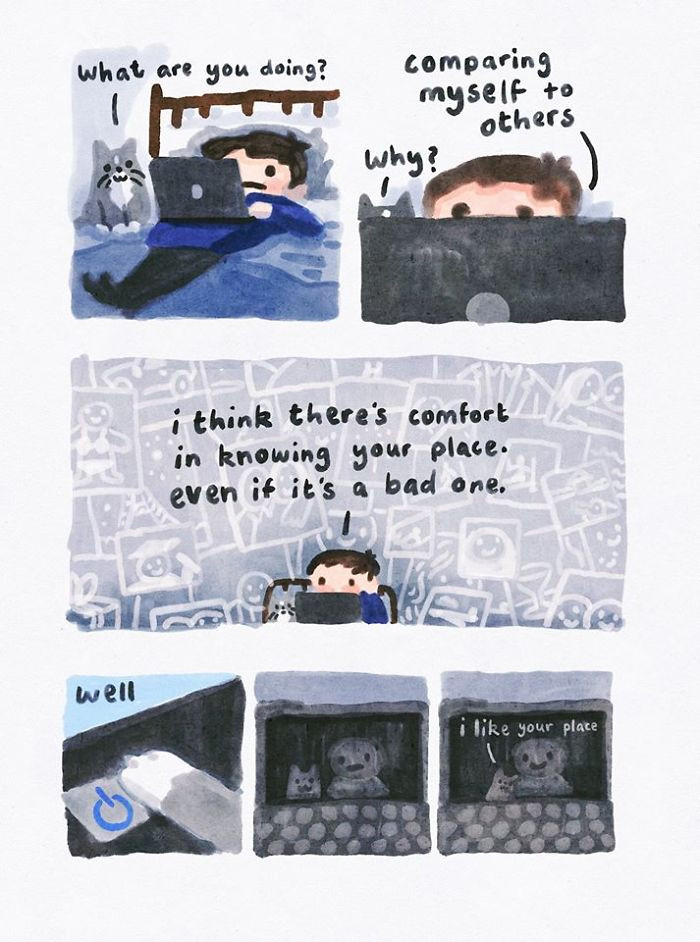 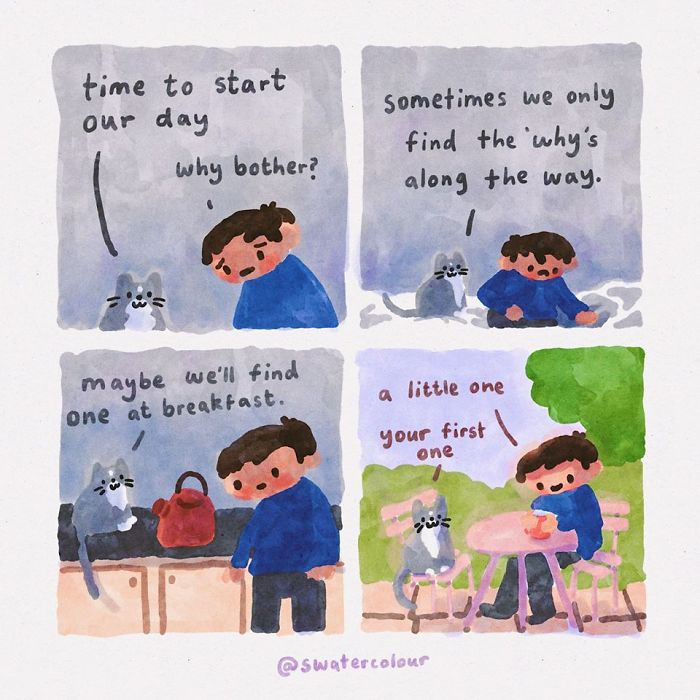 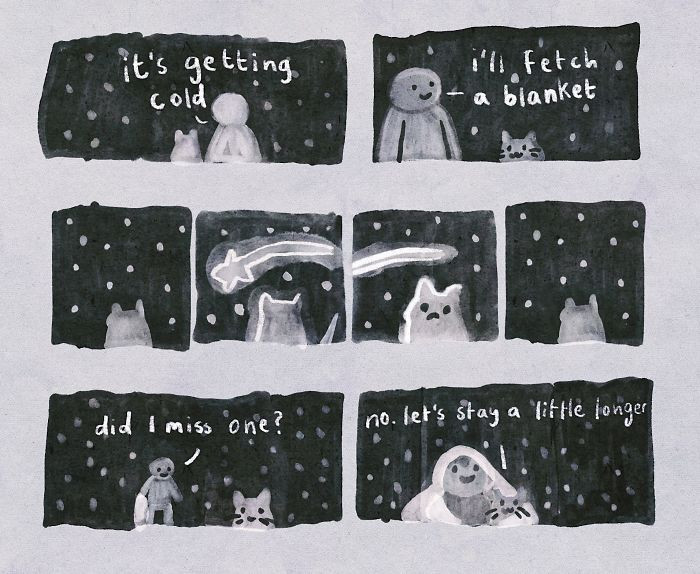 When it comes to advice about passion or discipline, Hector has plenty to say there, too!

"I think if you rely on some feeling of passion to motivate you then you will have a hard time. I've been doing a comic every day recently and I tend to wake up, think of an idea, and then have it painted by lunchtime.

The schedule around my painting process is quite robotic by now, and I think doing it that way opens up a clear space where you can be more creatively free. If I didn't have a schedule and instead waited around for inspiration that was good enough to motivate me to paint, then I probably wouldn't be as productive.” 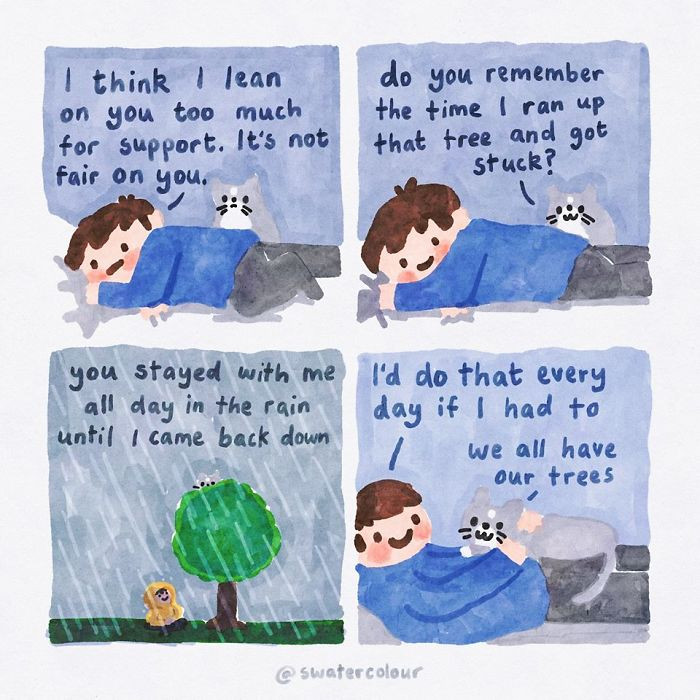 11. Sometimes love is a lil aggressive. 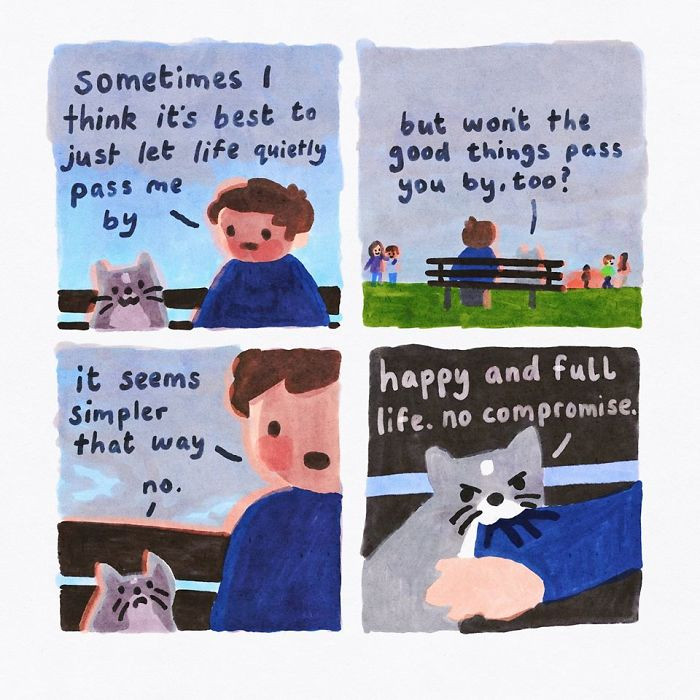 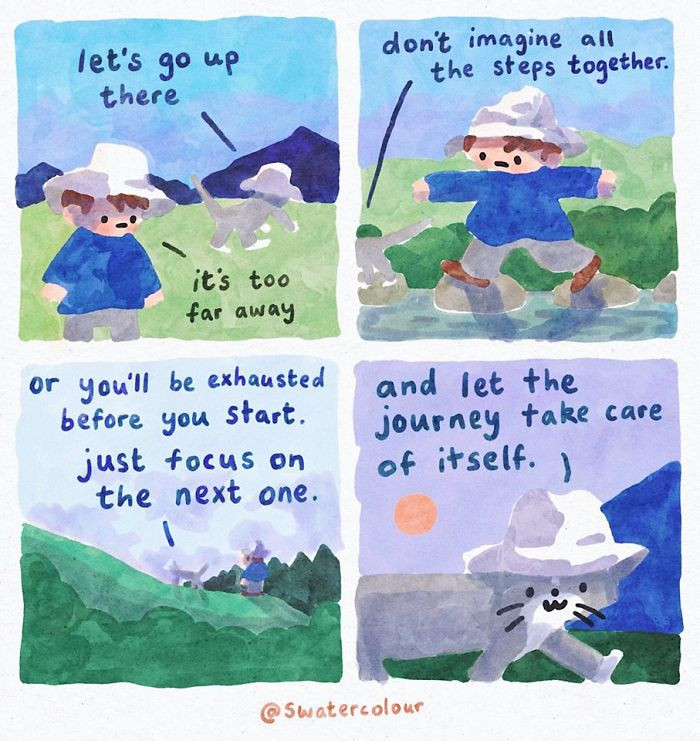 Inspired by Ona, Hector turns negatives into positives with his art. He said:

“So I think about the ways in which people can feel bad and how you might approach them as a friend would. I don't think I find it too difficult to think of ideas which is probably a testament to how nice my cat was." 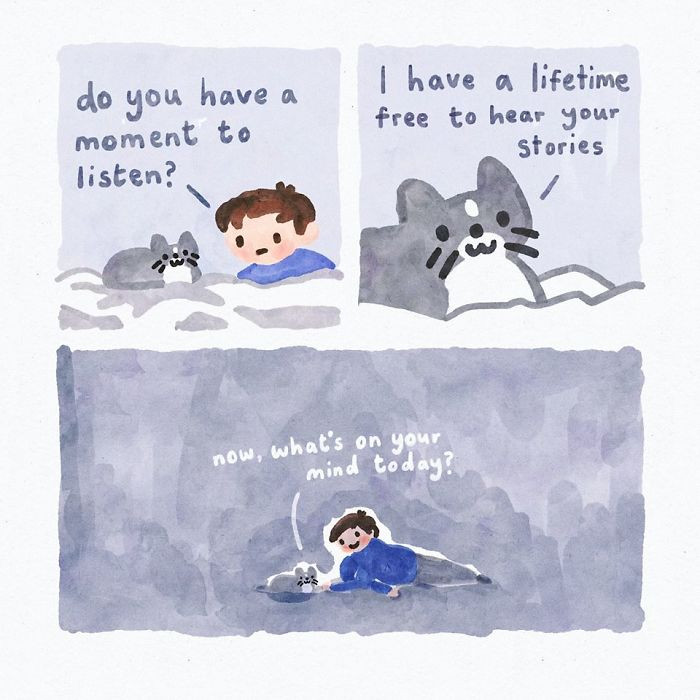 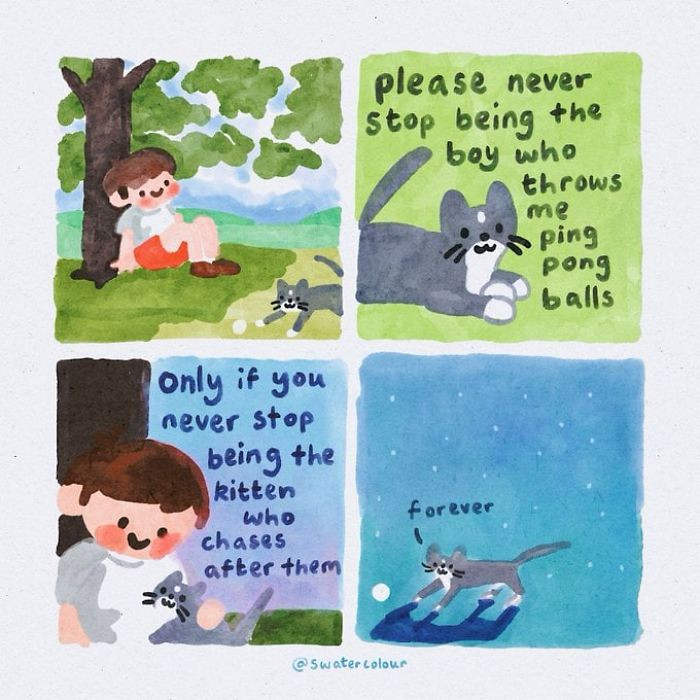 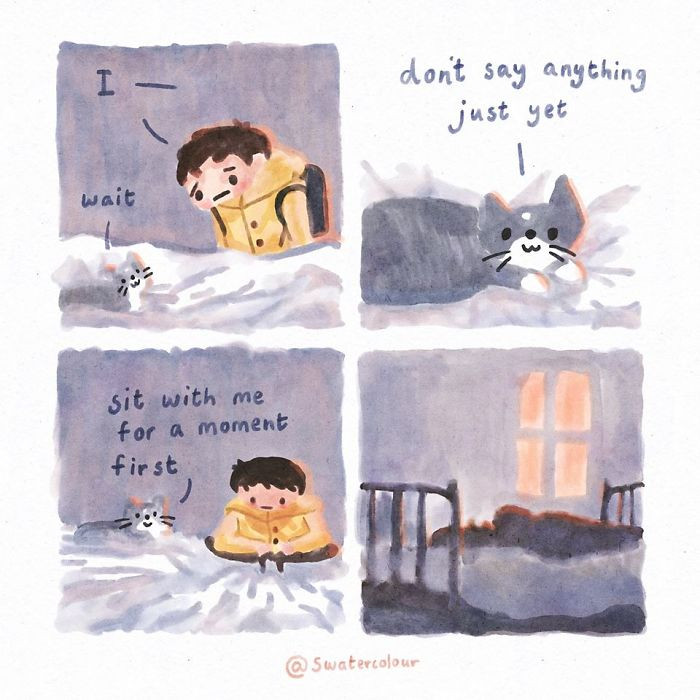 16. This sadness is temporary. 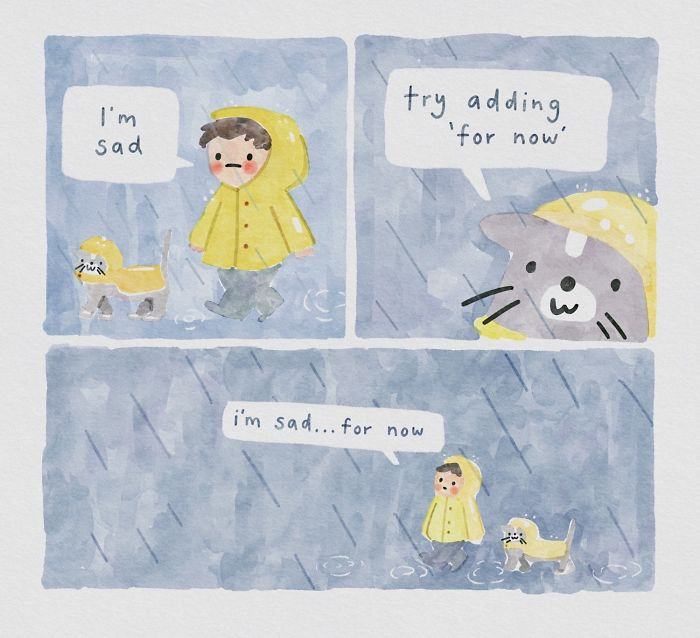 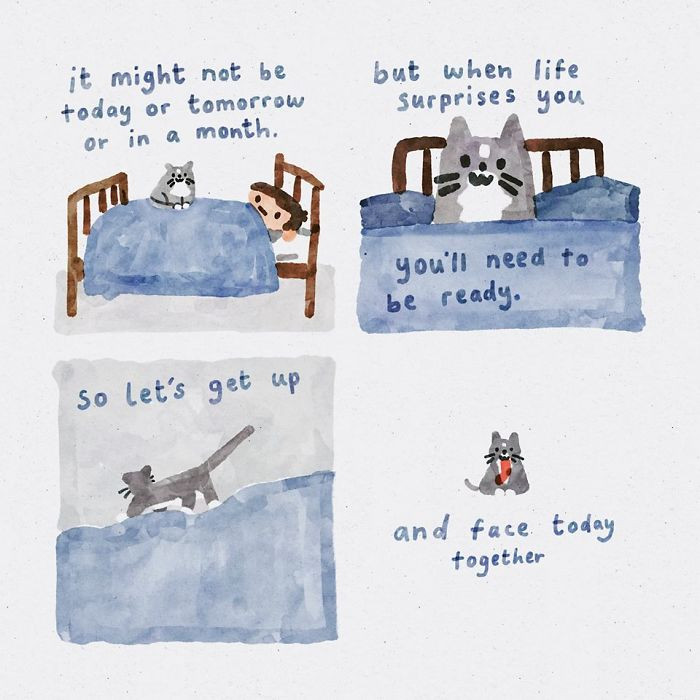 18. You're just prepping for big zooms. 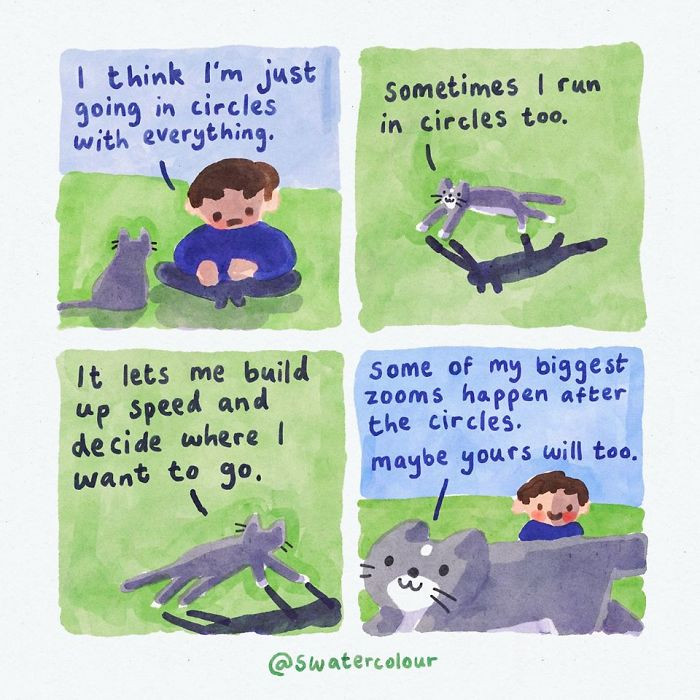 19. That moment washed away but the memory is forever. 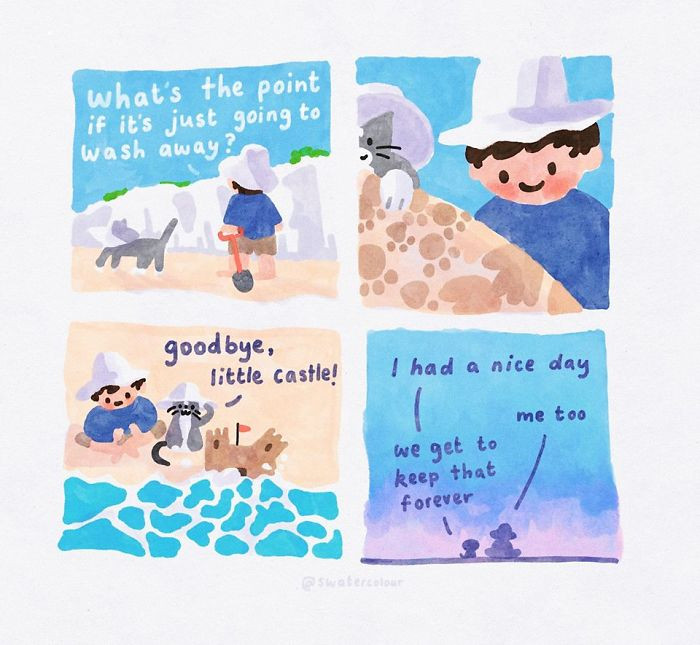 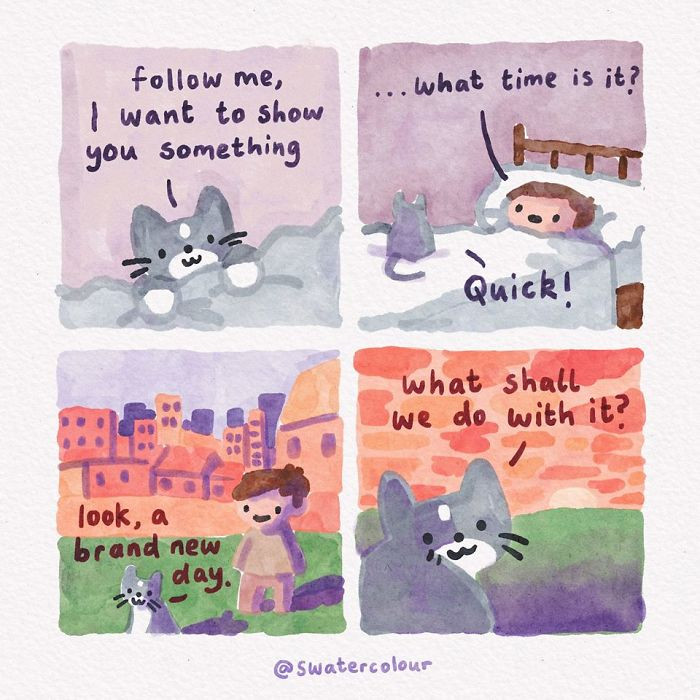 Hector's style is unique and endearing. He says, "for me, it's that the niceness and technical ability of a painting are different things and you can aim at either."

“It's perfectly possible to make happy little wobbly blobs of color and people will enjoy them if the message is good and sincere. There's probably a boundary of neatness that you should stay within but messiness is cool too.

Also, most of my pictures look very bad at first, and then it's only after a while that they come together. I think that's because a few wobbly blobs on their own look like an accident, but a finished painting of wobbly blobs looks purposeful.”

We sure can't wait to see what the future holds for Hector and his watercolor art.