Over the years science has rather well established that dogs are at least as smart as 2-year old human children. As a parent, I'm simultaneously impressed and scoffing. As the happy human of a dog companion, I'm a little disappointed in his lack-luster approach to education now that I've read all about Stella and her human Christina.

Christina Hunger is a 26-year old speech and language pathologist who taught her 18-month-old Catahoula/Blue Heeler mix, Stella how to communicate dog to human. Hunger created a step-button sound board and slowly taught her dog how to express feelings and desires utilizing the nifty tool. The results are nothing short of incredible and impressive.

A speech pathologist's expertise is in communication, and not just verbal communication. They can see the whole picture when a person is trying to communicate and can work with those skills to enhance them or move past them. It's a highly specialized field. 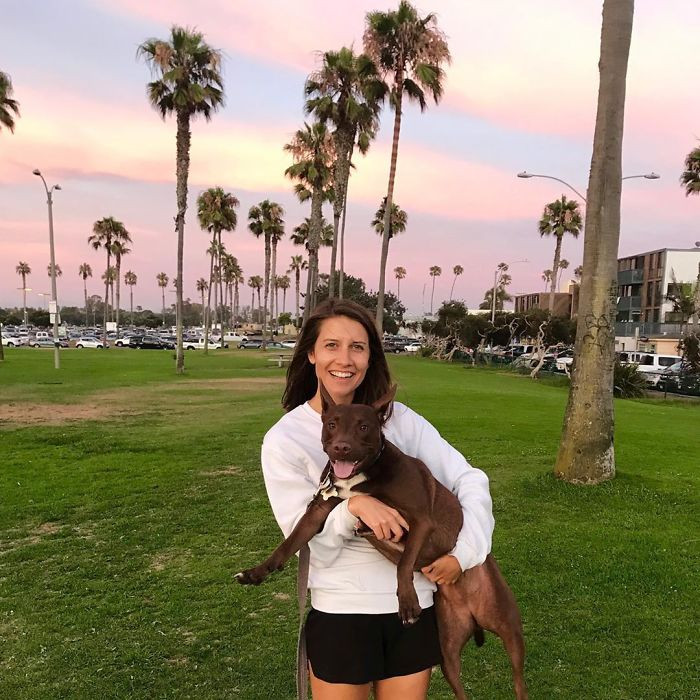 Christina lives in San Diengo, California with her fiance and their dog, Stella.

I’m a speech-language pathologist who believes everyone deserves a voice. 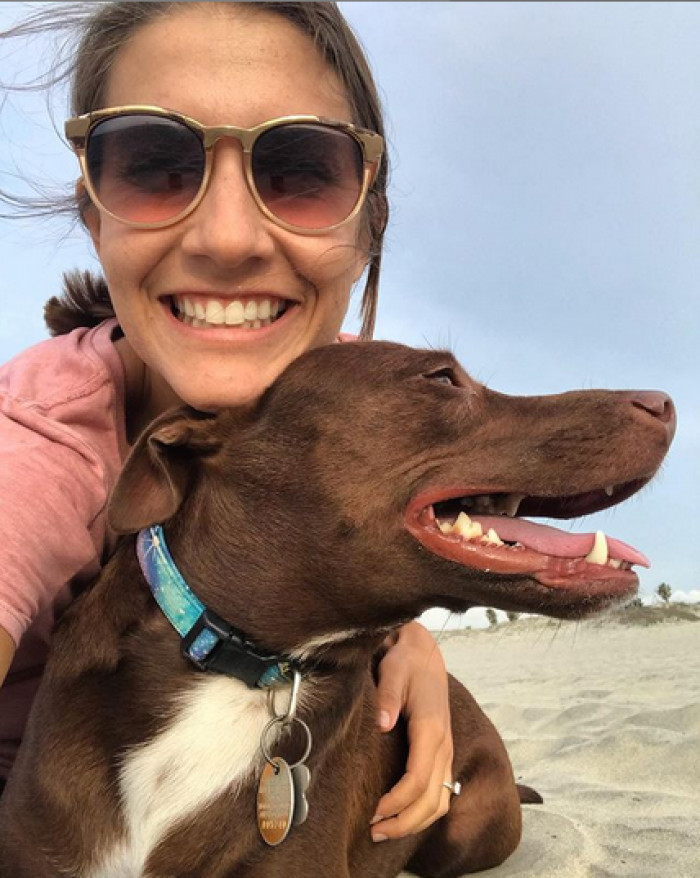 Hunger created a button sound board with various words and taught Stella how to use it. 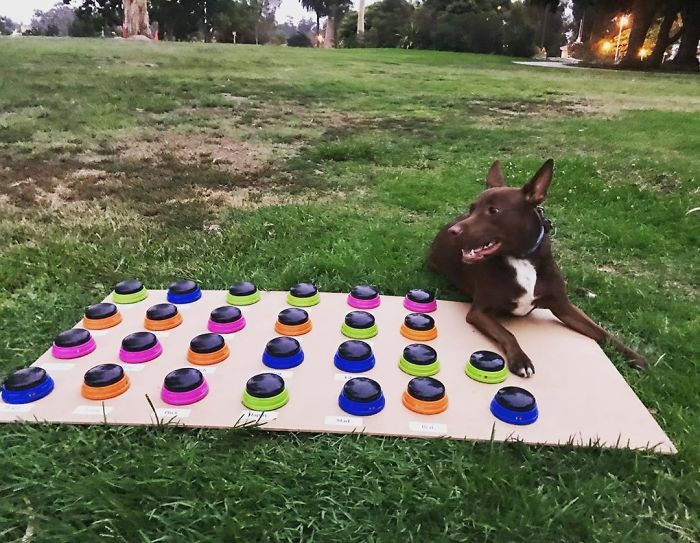 Amazingly, by using the soundboard Stella has been able to tell her family everything from when she’s tired and needs a nap, or when she’s hungry and wants to grab a bite, to even when she wants to go for a walk – specifically to the park. 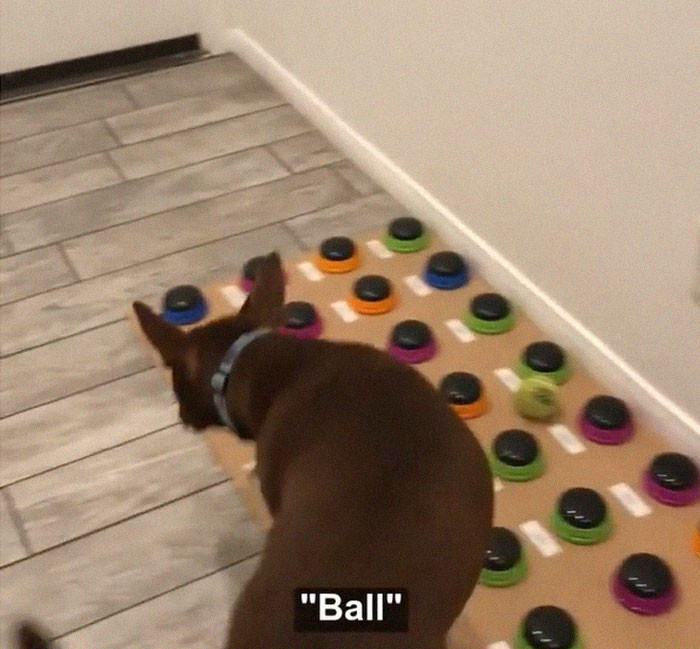 Not only does Stella know all of the 29 words available to her via the buttons, but she can string them together into phrases and sentences. 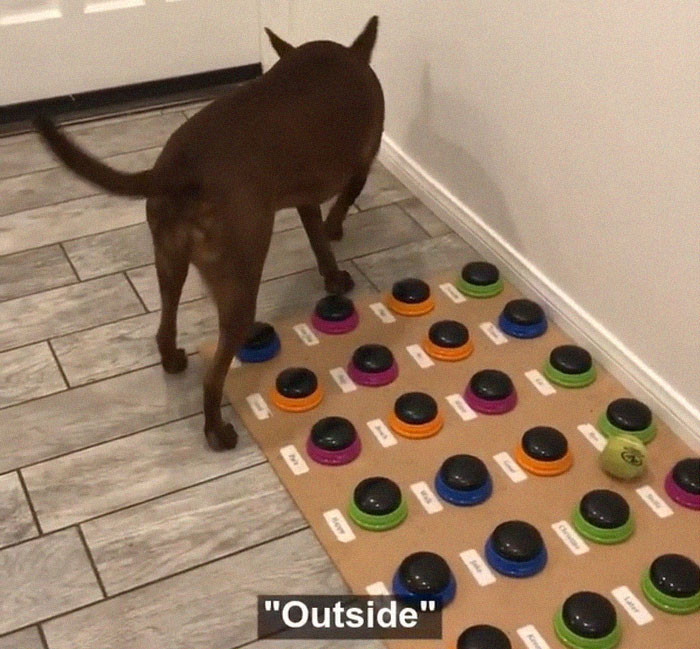 Check Stella out in action:

Not that it isn't the coolest thing ever, and no that any one of us wouldn't blatantly love to have a conversation with our dogs, but there is an awful lot of curiosity about how this whole thing came about. 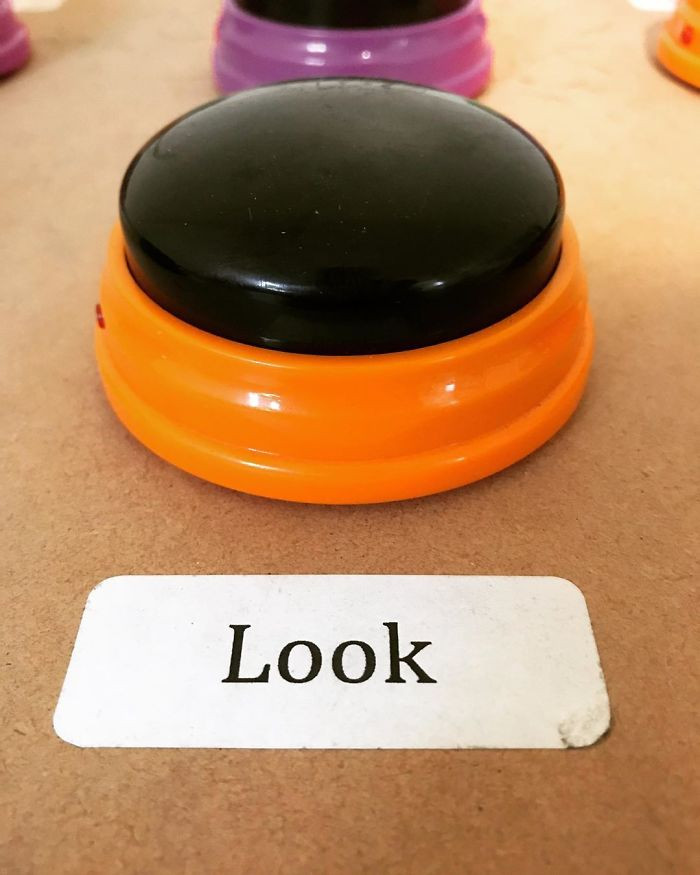 Inspired by my passion for Augmentative and Alternative Communication (AAC) and by my love of dogs, I’m using my speech-language expertise to show how much dogs can say when given the opportunity to learn. 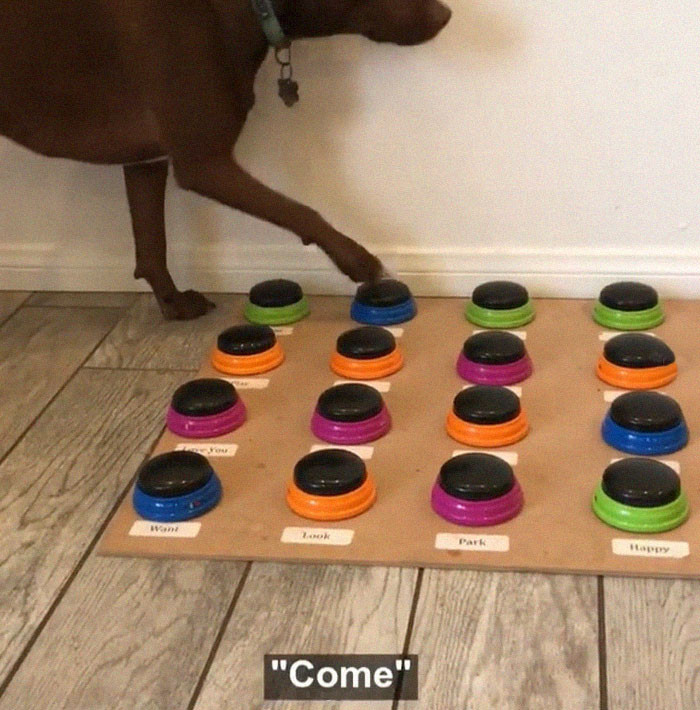 “Last night, right before this video was taken, I accidentally said “ball” on Stella’s device while I was actually reaching for a different word. But, Stella took this very seriously! She picked up her ball, dropped it on her device, and said “Good” (Translation: Good idea, Mom!)

I started recording right after she said “Good” and caught the rest of her thought: “Happy ball want outside!”

Like all AAC users, Stella thrives when we talk to her using her device and say words that she loves. She never needs to know it was on accident!” 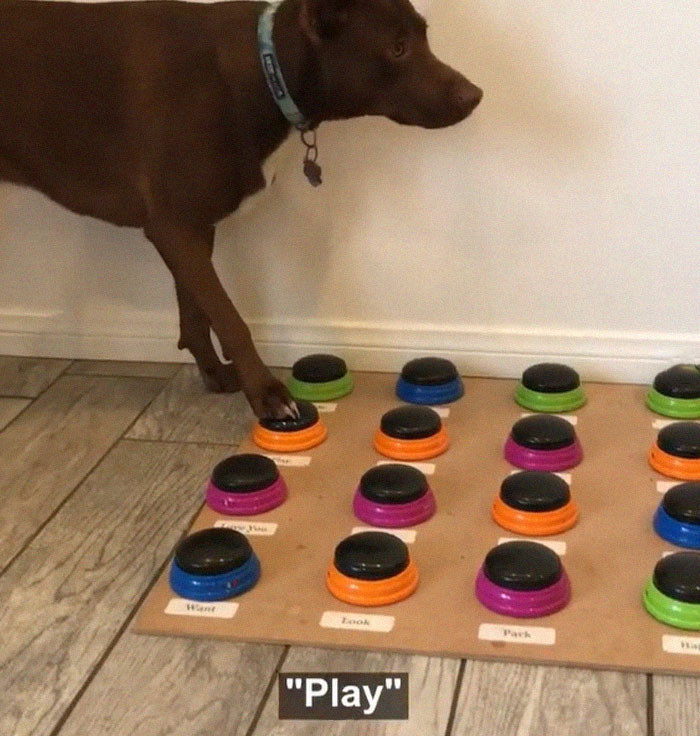 Stella is very smart and has used the communication device in many impressive ways. For example:

One day, Stella was whining at the front door, unable to stay in place. Hunger thought that she needed to go outside. However, Stella walked to her device and said, “Want,” “Jake” “Come.” The pup then stood in front of the door and waited until Jake, Hunger’s fiancé, returned home. Stella then pressed “Happy” and rolled over, asking for a belly rub.

Watch this sequence of Stella telling us, three different ways in a row, that she wanted to go play!

“Stella adapts her message when she isn’t feeling understood, just like we all do! If someone doesn’t understand us or we don’t get the response we were expecting, we change the words we’re using to explain ourselves better.

First, Stella said “Come play.” When we didn’t come play, she added more details and said, “Outside play love you.” Finally, she got as specific as she could and told us, “Park.” Stella is truly a great communicator!”

“Stella uses language differently when she’s in a heightened state versus when she’s calm!

Today when she heard some noises outside and wanted to go investigate, I told her we were staying inside.

Stella responded by saying, “Look” 9 TIMES IN A ROW, then “Come outside.” She was clearly in a more frantic state, and her language use matched that. We all sound differently than normal when we’re in distress, Stella included!" 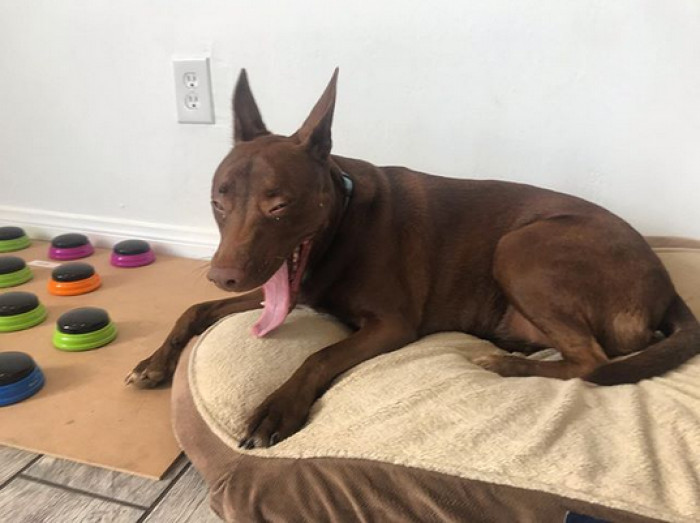 "I’m impressed that Stella is communicating with language during her more heightened states, not just when she’s calm and in a quiet space. This shows me that words are becoming more automatic for her to use. It’s similar to when a toddler starts using language to express himself during times of frustration instead of only crying. That happens when it’s easy for the toddler to say words, not when he’s still learning and it takes a lot of focus to talk.” 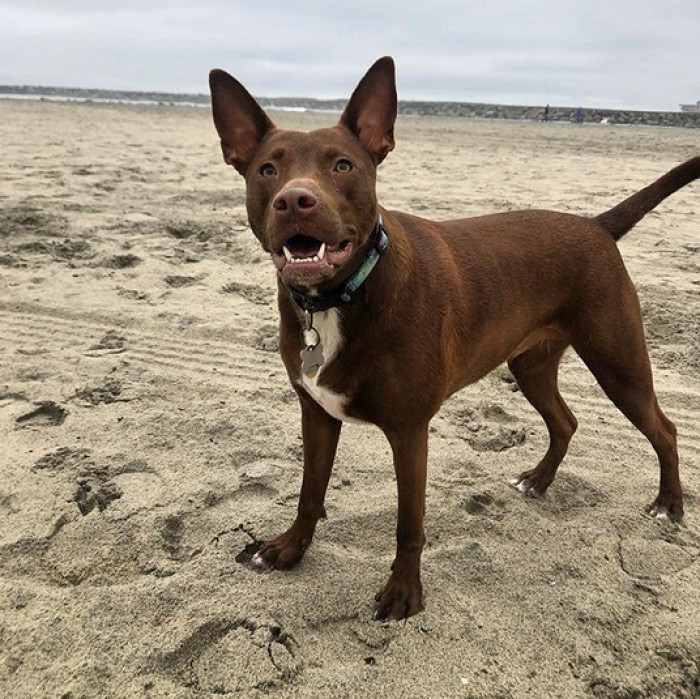 “Wait, wait, wait, then wait some more! Best practice in speech therapy with beginning communicators includes giving the learner increased wait time to process what’s happening and generate a response. Pausing before prompting or talking more gives the communicator a chance to respond!"

"Stella benefits from the same wait time. In this video she hit her “outside” button twice, but no sound came out. Instead of jumping up to fix it, I bit my tongue, stood still, and waited a full 13 seconds before Stella said “No. Help help!” Way to go Stella for telling me her button wasn’t working and asking for help!” 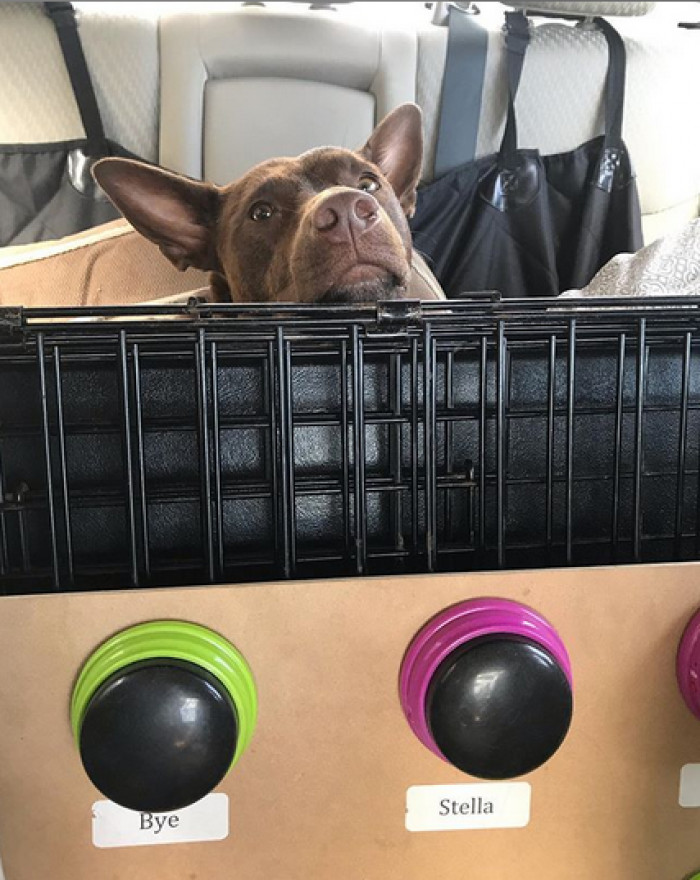 “Don’t you just hate it when your dog talks back to you?? After Stella finished her breakfast this morning, I said and modeled on her device “Stella all done eat.” She immediately responded “no,” and walked back to her dishes while licking her lips.

While this made me laugh, I also think it’s pretty amazing because Stella is really starting to appropriately respond to what we’re saying and participate in short conversations.”

Stella is filled with love and a zest for life. She is witty, happy, playful, and very cuddly. Stella’s best days are spent playing with sticks and friends at the dog park, chasing birds along the beach, and getting belly rubs from anyone she can. 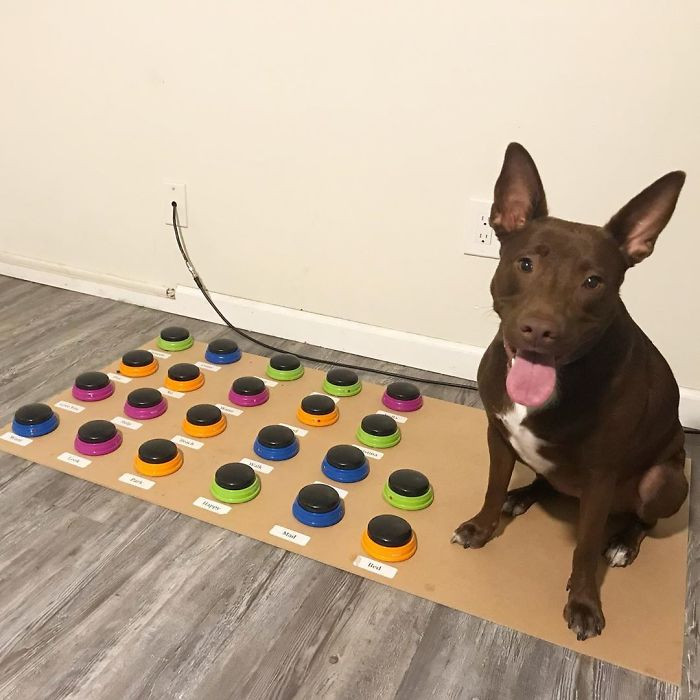 Unsurprisingly, people are fascinated and excited by Stella and Christina. 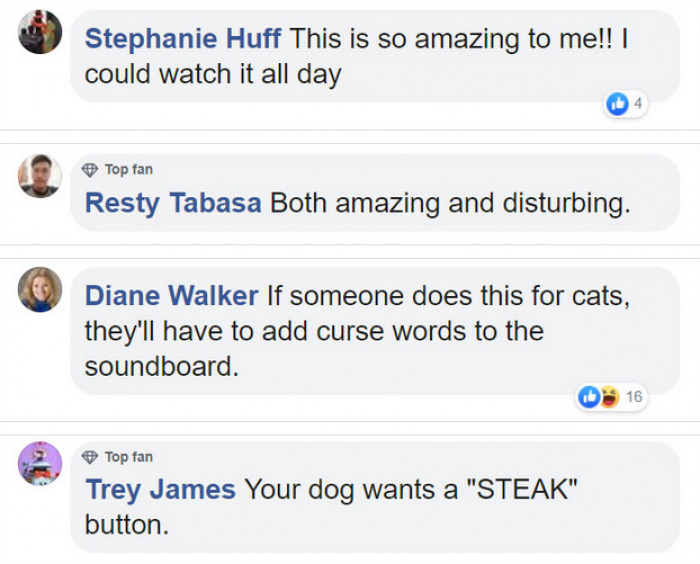 You can keep up with Stella's adventures and progress by following them on Instagram. You can also learn more about Christina's ongoing research by checking out her blog!

What do you think of Stella's skills? Let us know all of your heckin' thoughts in the comments now!